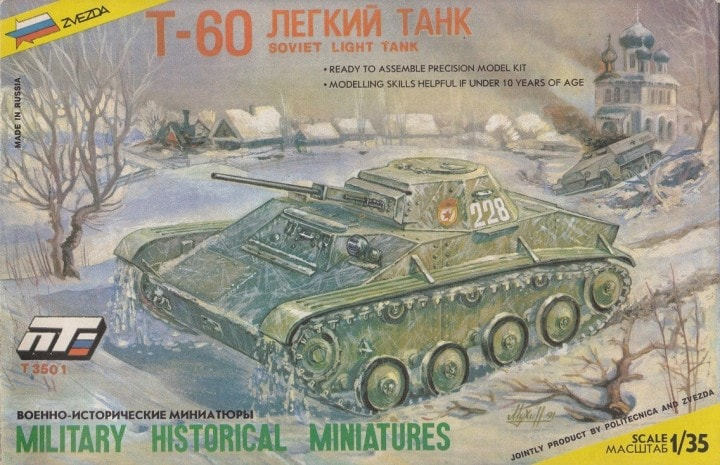 Kit is shown all over e-Bay and in various prices and brands. My kit has a copyright date of 1992.
​HISTORY:

The T-60 scout tank was a light tank produced by the Soviet Union from 1941 to 1942. During this period, 6,292 units were built. The tank was designed to replace the obsolete T-38 amphibious scout tank.
Kholm Pocket.

Nicholas Astrov's design team at Moscow Factory No. 37 was assigned the task of designing amphibious and non-amphibious scout tanks in 1938. They produced the T-30A and T-30B prototypes.

The former was to be manufactured as the T-40 amphibious tank starting in 1940. It also led to the T-40S (sukhoputniy, "dry-land" version), a heavier tank prototype which was considered too complex to manufacture.

The T-30B prototype, sharing the T-40's chassis but simpler in construction and with heavier armor, was accepted as the T-60 scout tank, and production began in July 1941, just after the German invasion.

Although at first intended to carry a 12.7 mm machine gun like the T-40, the armament was later upgraded to the 20 mm TNSh cannon, a tank version of the ShVAK, on the advisement of the People's Commissar for Tank Industry Vyacheslav Malyshev.

This weapon could penetrate 15 mm of perpendicular armor at 500 m which proved inadequate against the newer up-armored German tank designs, thus attempts were made in 1942 to re-arm the T-60 with the 37 mm ZIS-19 cannon, but were abandoned due to the Soviet Union's shortage of 37 mm ammunition.

Due to this a new project was started to house the standard 45 mm tank gun on a modified turret. That became impossible, and a new turret was designed and tested successfully in the summer of 1942.

The new turret had the gun moved to its right side to make more room for the crew member and a co-axial machine gun was added. The project was terminated when Stavka chose the recently produced T-70 as the new standard light tank.

A number of T-60s were captured and pressed into German use as the Panzerkampfwagen T-60 743(r).

The T-60 was also used in the design of the experimental T-90 antiaircraft tank.

Zvezda is a model company based in Moscow, Russia.

The box art shows a T-60 moving down a snow-covered road. It is overall khaki with a Order of the Red Banner badge followed by a white 228 on the sides of the turret.

In the background there are houses and a church and a knocked-out German half-track bellowing black smoke.

The box art says MADE IN RUSSIA, Ready to assemble precision model kit. Modeling skills helpful if under 10 years of age. Kit is made jointly by Politechnica and Zvezda and it is in the Military Historical Miniatures Series.

One side panel has 4 yellow box arts with black images of other model kits that Zvezda manufactures. Captures are all in Russian only. There are 2 kits of Russian infantrymen (4 figures per kit), a 120 mm Russian mortar with 4 man crew and trailer and a Russian BT-5 tank.

No kit numbers are provided for these. I assume they are all to 1/35th scale

The other side panel has a front and side view of a T-60 in overall khaki with blotches of winter white-wash and a black turret number 257 and the history of the tank in Russian only.

The kit holds 2 dark-green trees and the decal sheet in a sealed clear cello bag and the instructions.

The instructions consists of a single-sheet, printed on both sides in Russian in 9 1/2" x 13 1/4" format. Folded twice to fit the box.

The face side has the history of the tank with part trees illustrations, over 2 marking and painting 2-views and 3 turret illustrations.

The first 2-view is in overall khaki with no markings.

The second 2-view is in a base of khaki with a heavy coat of winter white-wash and no markings.

The first turret illustration is khaki with a white 228 and the Order of the Red Banner badge on the turret sides.

The second turret illustration  is khaki with a white Russian slogan on the sides of the turret. Unfortunately I have no information on what unit the tank is from.

The third turret illustration is khaki with white wash and a black 957 on the sides.

The reverse side of the instructions has 10 assembly steps and 3 international assembly symbol explanations.

Trees are not alphabetized. Only numbers of parts is shown in the parts trees illustrations. There are no part number tabs next to the parts on the trees. Bad move Zvezda! 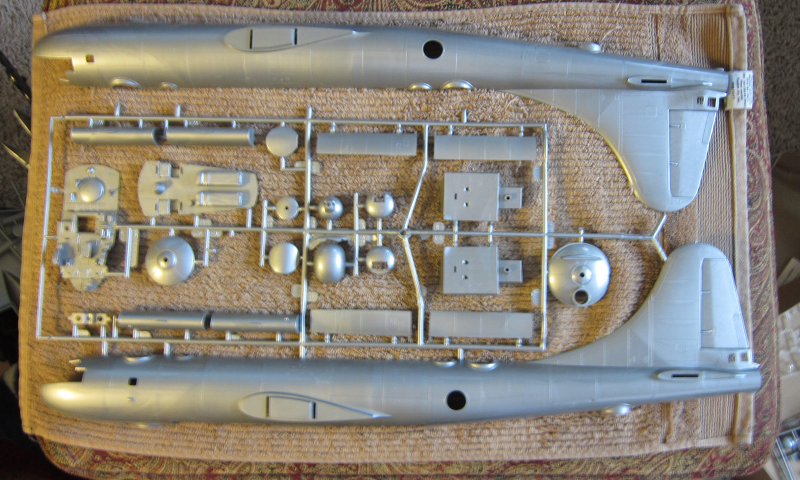 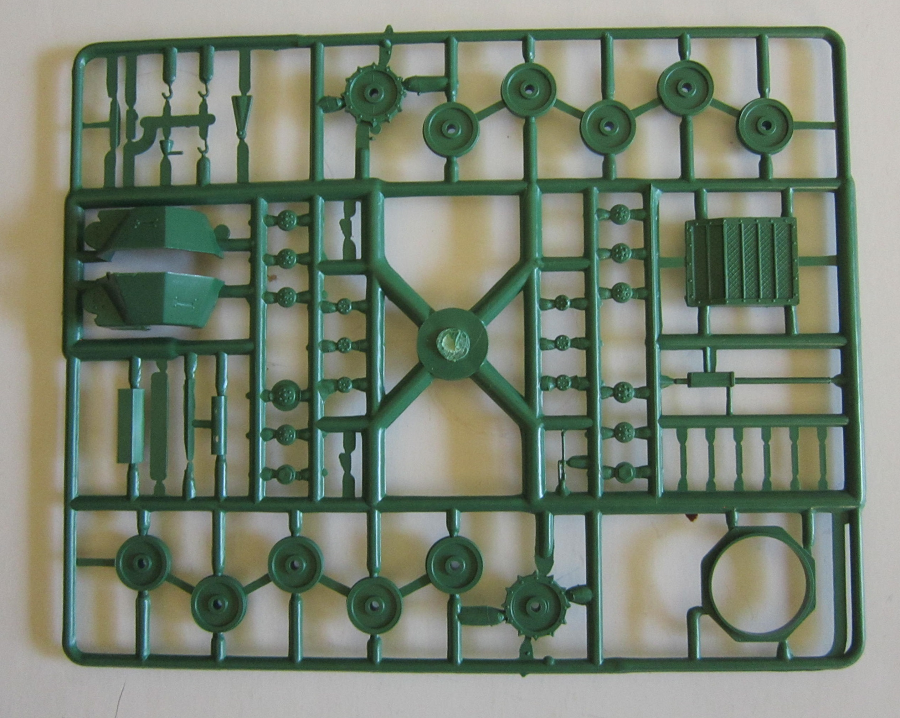 ​There are 2 runs of black vinyl treads. 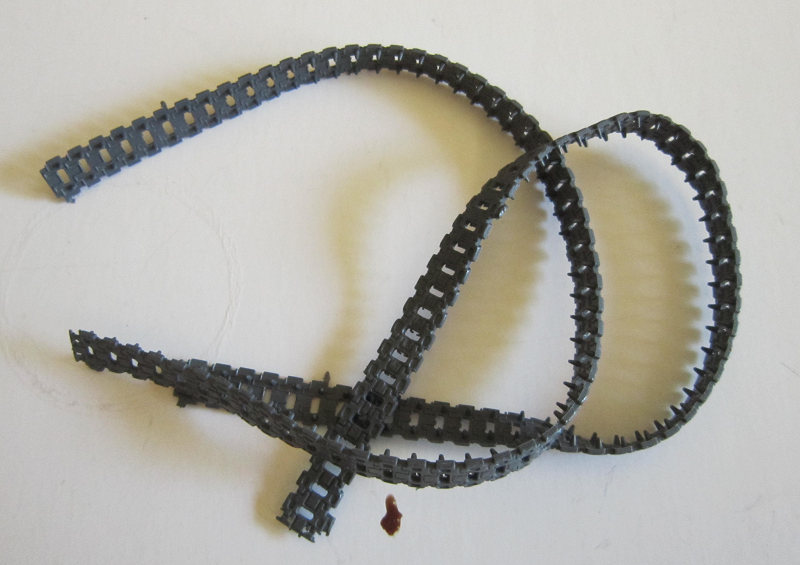 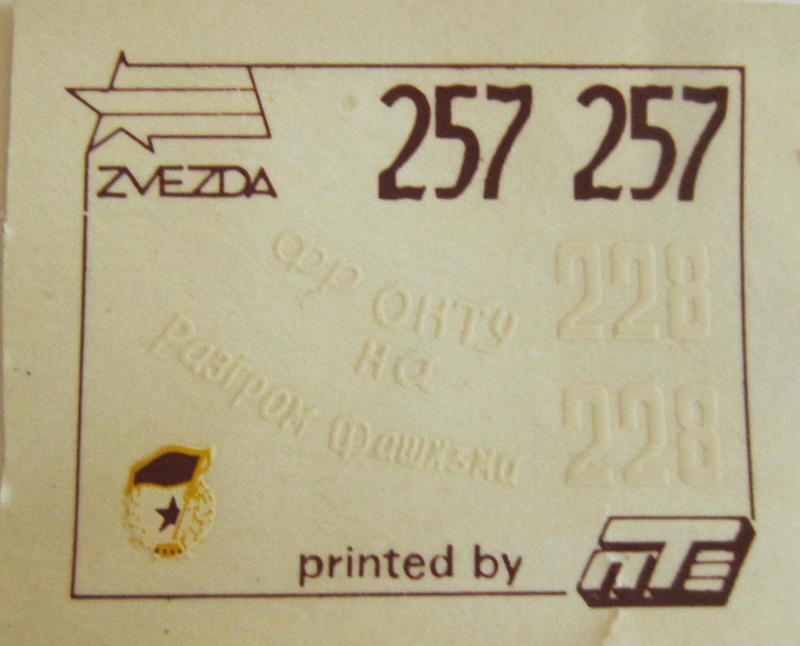