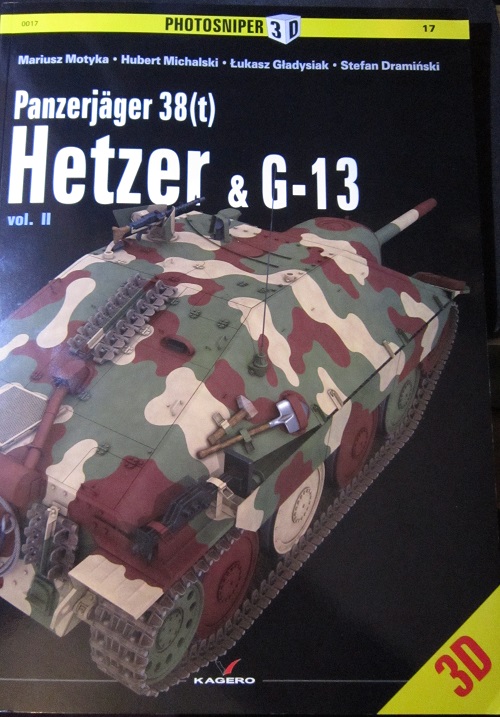 
The Jagdpanzer 38 (Sd.Kfz. 138/2), later known as Hetzer ("baiter"), was a German light tank destroyer of the Second World War based on a modifiedCzechoslovakian Panzer 38(t) chassis. The project was inspired by the Romanian "Mareşal" tank destroyer.


The name Hetzer was at the time not commonly used for this vehicle. It was the designation for a related prototype, the E-10. The Škoda factory for a very short period confused the two names in its documentation and the very first unit equipped with the vehicle thus for a few weeks applied the incorrect name until matters were cleared. However, there exists a briefing paper from Heinz Guderian to Hitler claiming that an unofficial name, Hetzer, had spontaneously been coined by the troops. Post-war historians basing themselves on this statement made the name popular in their works, though the vehicle was never named as such in official documents.

The Jagdpanzer 38 was intended to be more cost-effective than the much more ambitious Jagdpanther and Jagdtiger designs of the same period. Using a proven chassis, it avoided the mechanical problems of the larger armoured vehicles.

It was better armored than the thinly armoured earlier Panzerjäger Marder and Nashorn with a sloped armour front plate of 60 mm sloped back at 60 degrees from the vertical (equivalent in protection to about 120 mm), carried a reasonably powerful 75mm gun, was mechanically reliable, small and easily concealed. It was also cheap to build.

The Jagdpanzer 38 succeeded the open-top Marder III (based on the same chassis) in production from April 1944; about 2584 were built until the end of the war. The older Marder III Panzerjäger series retained the same vertically sided chassis as Panzer 38(t). In the Jagdpanzer 38, the lower hull sides slope 15 degrees outward to make roughly hexagonal shape when viewed from front or rear. This increased the available interior space and enabled a fully enclosed casemate-style fighting compartment. Because of the fully enclosed armor, it was 5 tonnes heavier than the Marder III. To compensate for the increased weight, track width was increased from 293 mm to 350 mm.

Initial production Jagdpanzer 38 did not sit even with the ground because gun, transmission and thicker frontal armor weighed the front down. Leaf springs were strengthened from June 1944 which leveled the posture of the vehicle. From May–July 1944, accessibility was improved in the form of more hatches: commander's smaller hatch opening to the rear, then right rear corner for radiator access, and left rear corner for fuel tank access. From August 1944 lighter inner and outer mantle reduced the weight by 200 kg. These are more conical looking mantle than half cone shaped initial mantles.

Also from August 1944, new rear idler wheels were introduced. These had 8, 6, and 4 (not necessarily in that order) lightening holes instead of 12. These simplified the manufacturing process. In September 1944, front 16 spring leaves were increased in thickness to 9mm per leaf, rear 16 leaves maintained 7mm each in thickness. Also in September side Schurtzen's front and rear tips were bent inward to prevent them from catching bushes and get dismounted. It was discovered that driver's periscope housing acted like a shot trap, preventing incoming shells from bouncing off the front glacis.

The protruding housing was removed, instead periscope was inserted into vertical cuts to the front armor from October 1944. Also from October 44, flame reducing muffler was introduced. These reduced visibility and backfire. Commander's head cushion was added to the hatch from October 1944. At the same time, road wheel's rims were riveted instead of using bolts. To cope with heavy front, and the necessity to traverse the vehicle to aim, gear ratio was lowered to 1:8 instead of 1:7.33 to reduce the stress on final gears from January 1945. Button-down Jagdpanzer 38 was blind to the right side. Since 20mm side armors (same as late model Panzer II's side armor) were only adequate to protect the crew from fairly small caliber guns, it was important to face the threat forward. Hence, commander's field of view was planned to be improved by installing a rotating periscope in Jagdpanzer 38 Starr, just as Sturmgeschutz III and Elefant had evolved from a single pair of periscopes to all around vision blocks. However, Jagdpanzer 38 Starr came too late to see the action in the field.

The Jagdpanzer 38 equipped the Panzerjägerabteilungen (tank destroyer battalions) of the infantry divisions, giving them some limited mobile anti-armor capability. After the war Czechoslovakia continued to build the type (versions ST-I and ST-III for training version, about 180 units built) and exported 158 vehicles (version G-13) to Switzerland. Most vehicles in today's collections are of Swiss origin.

By order of Adolf Hitler in November 1944, a number of Jagdpanzer 38s were refurbished straight from the factory with a Keobe flamethrower and accompanying equipment instead of the normal gun. The flame projector, encased in a metal shield reminiscent of that of a gun barrel, was easily prone to damage. Fewer than 50 of these vehicles, designated Flammpanzer 38, were completed before the end of the war, but they were used operationally against Allied forces on the Western Front.

Further variants were a Jagdpanzer 38 carrying the 150 mm sIG 33/2 Howitzer, of which 30 were produced before the end of the war, and the Bergepanzer 38, a light recovery vehicle of which 170 were produced. Plans were made to produce other variants, including an assault gun version of the Jagdpanzer 38 carrying a 105 mm StuH 42 main cannon, a version mounting the 7.5 cm KwK 42 L/70 gun from the Panther, and an anti-aircraft variant mounted with a Flak turret. The war ended before these proposed models were put into production. Prototypes were also developed for the Jagdpanzer 38 Starr, this was a simplified version of the Jagdpanzer 38 and also a step towards theE-10. The design removed the recoil absorber from the main 7.5 cm Pak 39 gun, instead attaching the gun to the chassis, and using the Jagdpanzer 38's bulk and suspension to absorb the recoil. 10 were built, but never issued. 9 converted back to normal Jagdpanzer 38 and Hitler ordered the remaining prototype destroyed rather than let it be captured at the end of the war.

This book is soft bound of 76 pages in 8 ¼” x 11 ¾” page format in English. I comes with a hand-held pair of cardboard glasses that have one red lends and one blue one, to use to see pictures in the book in 3-dimentsion (3D).

The book contains 42 black and white wartime photos. Including the front and back covers. There are 18 color photos of a Hetzer of the “Hemmann von Salza” regiment on the outskirts of Berlin, April 1945 and 72 color illustrations . These illustrations are done in 3D.

The last page of the book has color cover illustrations of other books that Kagero publishes. They show aircraft, ships and armor subjects. These covers can be seen at the Casemate web site, who is the distributor for Kagero.

The color illustrations include:

A top view of the Hetzer on the front cover in a base of tan, with red brown and dark green wave pattern camouflage. On the back cover is this same vehicle shown with the roof removed and interior illustrated. In the upper left corner is a illustration of the Czech-made Praga AC 2800 160 hp petrol engine.

The interior. (8 walk-around illustrations of what’s in there)

Seven more illustrations as walk-arounds of the Praga engine.

12 illustrations of the running gear and suspension as walk-aroujnds.

5 more Illustrations of the cover art subject from different angles.

8 illustrations of a Hetzer in the ambush pattern of camouflage.

5 illustrations of a Hetzer that was captured by the Poles and in the same color pattern as the cover art subject, with a white POA on the sides of the hull, followed by a vertical sky-blue and white bar.

8 illustrations of a second Hetzer captured by the poles. It is in a base of sand, with red-brown blobs outlined thinly with dark green. It has a white eagle on the sides of the hull and on the bow, with the white word “CHWAT” below the bird. The German crosses are still on the sides.

A side view of a Hetzer in the color scheme of the cover subject. It has a German cross on the side and the black serial no. 201. The caption is wrong calling it no. 211. It is of an unknown unit.

A side view of a Hetzer also in the scame color scheme, with just the serial no. 153 in black. This one was previously numbered 003 and at Prague in May 1945, No unit is mentioned.

Another side view of a Hetzer in a base of sand with dark green vertical bands, it has just the German cross on the sides of the hull and 8 white kill mark rings around the gun barrel. It is a vehicle with the 320th Panzer Division, Bohemia, 1945.

Another side view of a Hetzer in overall tan with white blotches and a thin German cross on the hull sides of an unknown unit in 1945.

I highly recommend this book to both modelers and military historians.