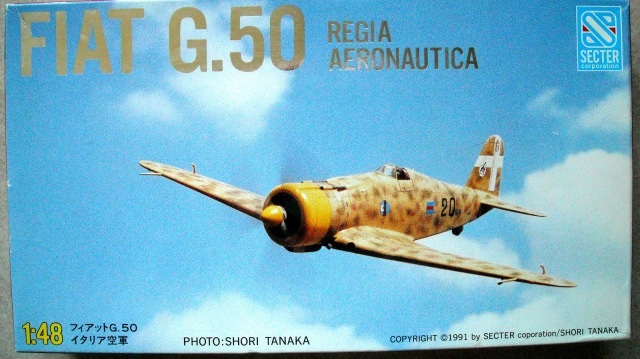 The Fiat G.50 “Frecia” (Italian – “Arrow”) was an Italian fighter of WWII. It was the first Italian low-wing monoplane fighter with enclosed cockpit and retractable landing gear to go into production. It went later, during production, without the enclosed cockpit though, as Italian pilots felt uncomfortable with it. It was also used in small numbers by the Finish Air Force.

The Fiat G.50 was designed by Giuseppi Garielli, starting from 1935. The prototype flew on 26 February 1937. The G.50 was the first front line Italian fighter, with retractable undercarriage, but despite these improvements, it’s maximum speed was only 33 km/h faster than it’s predecessor; the Fiat CR 42. Both types were powered by the 840 hp Fiat A.74 RC38, 14-cylinder, air-cooled radial engine.

The first operative aircraft were delivered to the Italian Regia Aeronautica in 1938.

Extremely maneuverable, it was one of the best fighters during the Spanish Civil War, yet by the time WWII started it was considered under powered and under armed. About 780 were built, 35 of which were exported to Finland.

At the entrance of Italy into WWII, there were 118 G.50’s available, with the 51st Stormo and part of the 52nd. Forty-eight aircraft saw limited action during the Battle of Britain as part of the Corpo Aereo Italiano based in Belgium. However, their use was hampered by their short range. The remaining aircraft saw action in North Africa and the Mediterranean. Appreciated mainly for its strength, it was used mainly for attack roles in the second half of the war. By the time of the Italian Armistice, few G.50’s were left in Italian service. A few were used as part of the Italian Co-Belligerent Air Force, while four were used by the Aeronautica Nazionale Repubblica as fighter trainers.

The G.50 saw it’s longest and most successful operations in the two Finish wars; Winter War 1939-1940 and Continuation War 1941-1944 against the Soviet Union. The fighters arrived too late to affect the course of the winter battles of 1940, but 13 aerial victories were achieved with Captain O. Ehmrooth, Lieutnant O. Puhakka and Sergeant L. Aaltonen being the most successful Fiat pilots with 2 victories each.

During the years of the Continuation War, the Fiat fighters were most successful during the Finish offensive of 1941. After that, it became increasingly less effective. The Soviets got better, newer fighter types into front lines during 1942 and 1943, while the Fiats were getting old and tired. A lack of spare parts meant that pilots were allowed only a minimal number of sorties. During 1941, the Fiat Squadron LLv26 claimed 52 victories against the loss of 2 of their own fighters. The most successful Fiat G.50 fighter pilots were O. Tuominen (23 victories), O. Puhakka (11 victories), N. Trontti (6), O. Paronen (4), U. Nieminen (4) and L. Lautamuki (4). The Finish Fiats were finally phased out of front line duty in the summer of 1944.

The Secter Corporation, based in Tokyo Japan, produced this kit years ago. It was distributed by Marco Polo Import Inc. in California. It was produced by Secter in 1990. It was reported, in several hobby magazines, at the time that there were shape inaccuracies and that the wheel wells were too shallow. Also, modelers thought that the trailing edges of the wings were too thick. Later, Hasegawa sold the Secter molds under their label, but did nothing to correct the mentioned problems. Pacific Coast/Misterkit now owns the molds and has done a lot of things to correct the problems with the Secter molds. Actually, their kit does not share anything with the Secter/Hasegawa kit. Pacific coast first did a cockpit set, then a PE set and a new lower wing with separate flaps. Finally, they did a totally retooled kit with resin parts and a thinner transparency.

I had never heard of Secter before or since. I bought my kit at an IPMS contest from one of the vendors in the room. He had the 50 dollar MSRP marked down to 30 and I bought it. After a few weeks since purchasing it went by, I read all the gripes about the kit in hobby magazines and was sorry I had bought it.

The kit comes in a shrink wrapped tray and lid type box. The box art shows a G.50 in the markings of Magg. M. Bonzano, Commander of the 20th Gruppo, 56th Stormo C.T., Ursel, Belgium, October 1940. The upper side camouflage of light tan with a mottle of maroon and green. The under-side is overall light gray. It carries the commander’s pennant below the cockpit and the fuselage number 20gr in black. The squadron logo of a cat on a white circle is on the rudder.

Inside the box is a cardboard shelf in one end of the tray to take up slack, because the kit is a good three inches too long. At first, I was fooled into thinking that there may be some PE or white metal parts below this shelf, but is only a space stuffer.

There is one large sealed cello bag that is holding three light gray trees of parts. Another, smaller sealed cello holds a large decal sheet, a small decal sheet and the single clear windscreen part.

The instructions consist of a single sheet that accordion folds out into six 10” x 7” format pages. Inside this sheet is a second single sheet, of the same size pages, that is folded in the center into only four pages and inserted inside the instructions.

Page one of the instructions gives the history of the G.50 in Japanese and English. This is followed by “Please read before assembling and the international assembly symbol translations..

Pages 2 through 6 of the instructions give a grand total of 12 assembly step drawings.

Colors to paint various parts as you go along are called out in each step. In step number 9 you opt for a choice of tail cones for either a G.50 or G.50bis version.

The four page other sheet has no less than 6 painting and marking schemes in it.

A G.50 flown by Magg. M. Bonzano, Commander of 20th Gruppo, 56th Stormo C.T., Ursel, Belgium, October 1940. It is the one on the box art painting and colors are described above.

A G.50 flown by the leader of the 356th Squadriglia, 21st Gruppo, 51st Stormo C.T., Naples, Autumn 1940. it is in the same camouflage as Bozano’s aircraft, has a command pennant under the cockpit and a squadron logo of a white wolf howling at the moon on a circle. The fuselage number is 356-1, with the first three numerals in black and the “1” in red.

A G.50 of the 359th Squadriglia, 154th Gruppo Aut. C.T., Divoli, Albania, summer 1941. It carries the same mottle camouflage scheme as the first two aircraft above. It has a white fuselage band and the fuselage code 395-10, with the first three numbers in black and the “10” in red. There is a squadron logo under the cockpit of a white bird on a blue circle with a red arrow through him.

A G.50bis of the 351st Squadriglia, 155th Gruppo Aut. C.T., Misurata, Libya 1941. It is in a camouflage of wavy lines of green over a tan base above and light gray below. It has a white fuselage band and carries the fuselage code of 351-5 all in black numerals.

A G.50bis of the 162nd Squadriglia, 161st Gruppo Aut. C.T., Reggio Calabria, September 1943. It is in over all dark olive green above and light blue gray below. It carries a white fuselage band and has the fuselage code of 162-4 with the first three numerals in black and the “4” as red.

A G.50 of the Croatian Air Force. It is in overall dark olive green with light blue gray underside. It has the Croatian checked shield insignia on wings and rudder and a yellow fuselage band. It carries the fuselage number 3502 in red numerals. 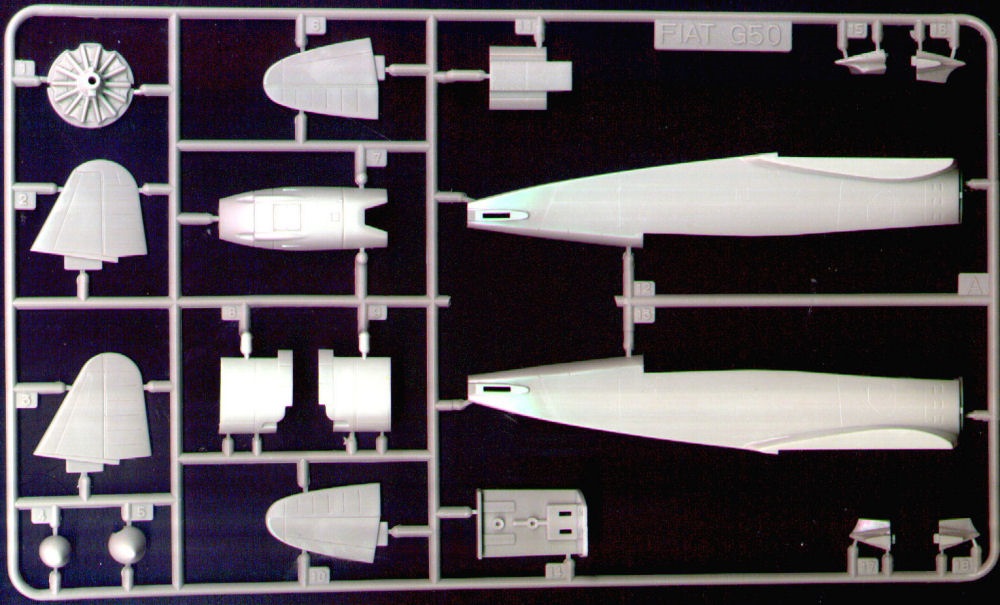 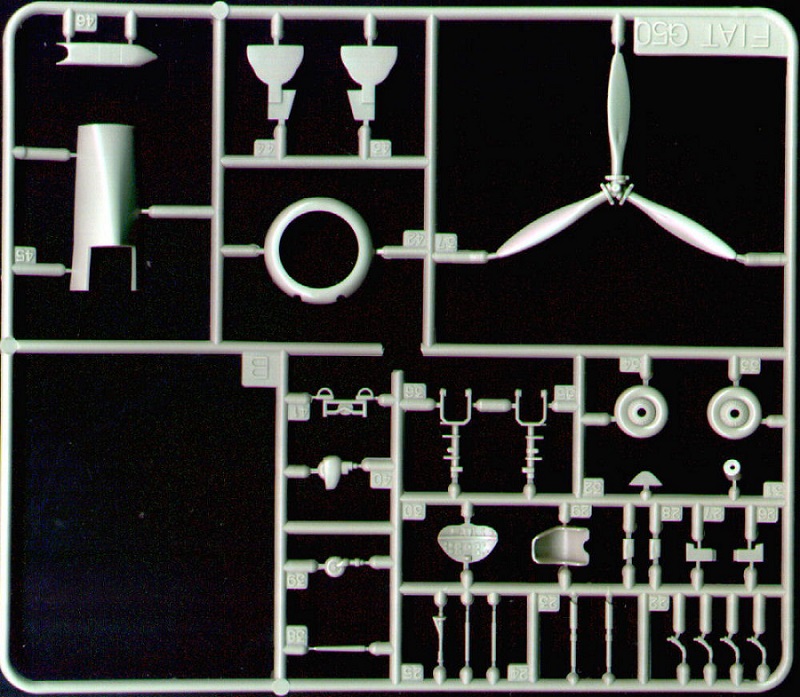 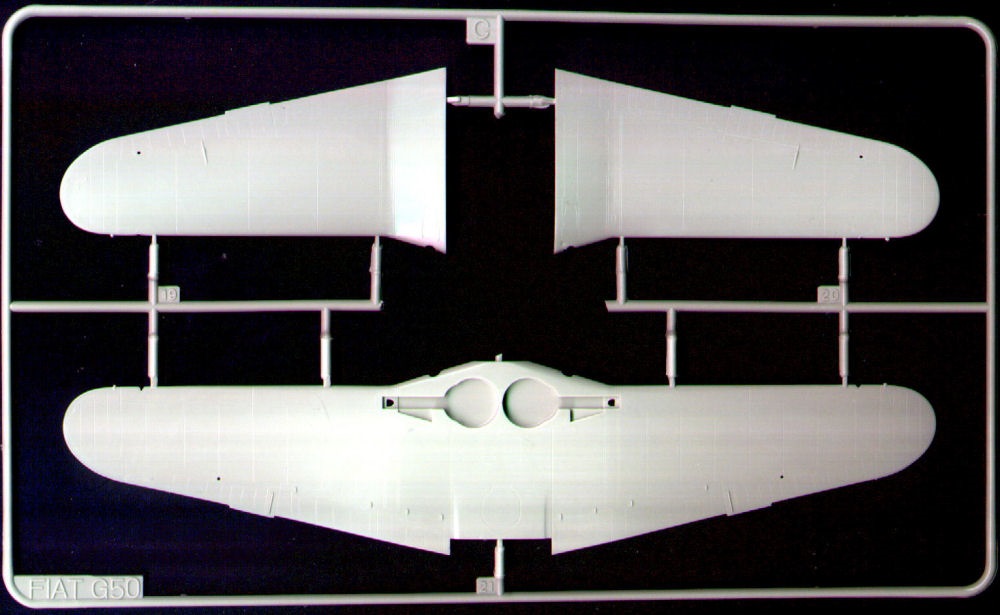 The next part is the small clear windscreen. Unfortunately I have lost this part...groan.

There should also be side glazing low panels that go on the cockpit entry doors, but the kit does not provide these. Some clear card stock will do the job. These panels are shown on the marking and decal application drawings.

There is no pilot figure included, nor glue or paint.

The decal sheet is next and markings on it are described above. There is a little decal sheet accompanying the larger one that just has two fuselage fascist markings on it. I have been told, by another modeler who has built this kit that the white portions of the decals are translucent and the camouflage showed through. The fuselage faces on the big decal sheet are wrong colors and the small sheet has just these on it correctly. 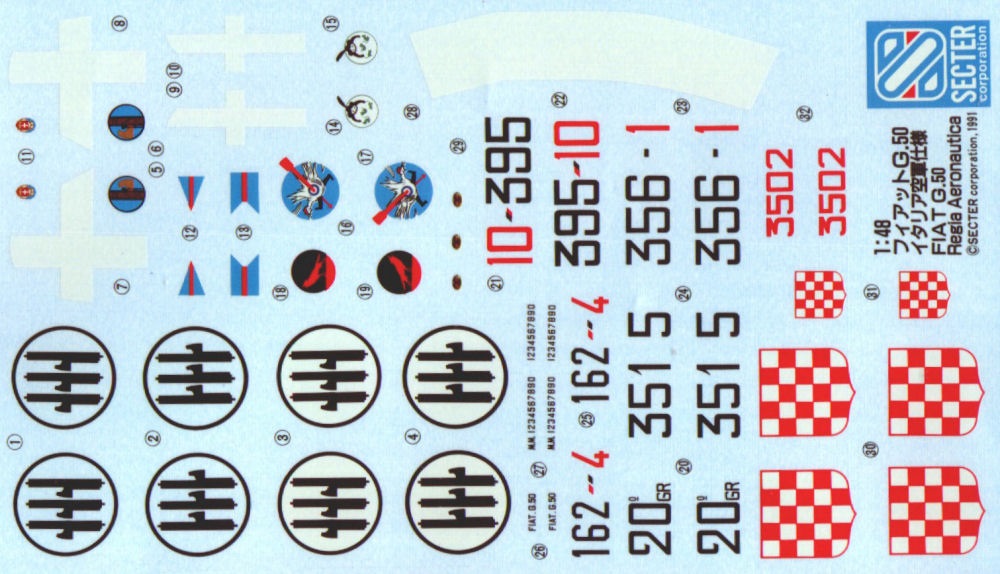 The aircraft features engraved detail, but all the control surfaces are molded solid. The engraved detail is so subtle that too much paint could easily obscure it.

I was made a gift of a Airwaves brass PE set (no. AC48-37) by a fellow modeler friend of mine years ago.  It has cockpit side wall stringers, control boxes, dash boards, seat belts and buckles etc. on it. It comes taped on a stiff card with the instructions inside a zip-locked cello bag.

I cannot really recommend this kit, because of all the shape problems etc. mentioned above. Not every model is a shake the box to assemble, magnificent kit we all know.