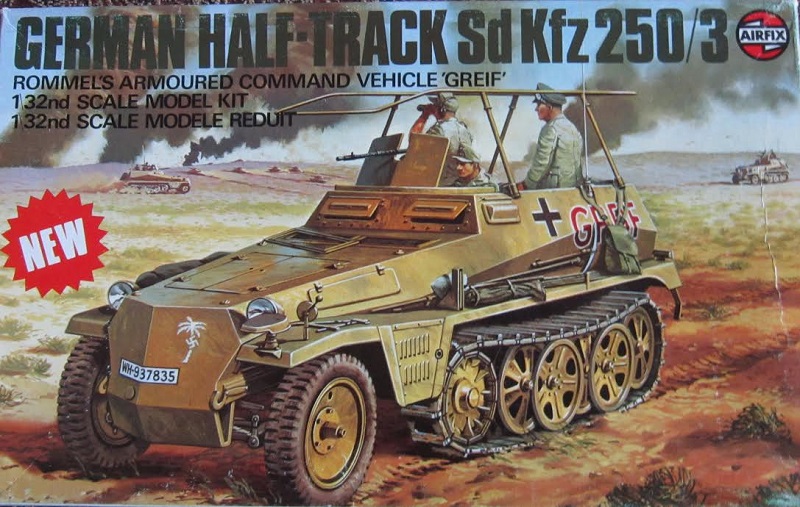 Armor played a decisive part in the Western Desert battles of 1941-43. Both the Deutsche Afrika Korps and the British Eigth Army fielded large armored formations in the see-saw battles along the North African Coast. The Germans were commanded by the redoubtable Field Marshal Erwin Rommel - the Desert Fox and through his skillful employment of forces the desert campaign came near to German victory.

Rommel frequently directed operations from just behind the front line. His armored radio command car becoming a familiar sight to the German troops. "Greif" or Strike, as he had named the vehicle, was a standard Sd.Kfz. 250/3 semi-tracked reconnaissance car developed from the one-ton armored personnel carrier which was one of the most common vehicles used by the German Army in the Second World War.

Minor alterations to Rommel's vehicle included the addition of spare fuel and water cans in racks on the rear hull plate and small items of internal equipment for the use of the Commander in Chief. Germany's use of half-track troop carriers during the war was the result of a German Ordnance Department requirement for high-speed mechanized support infantry to keep pace with the Panzer units.

The Sd.Kfz. 250 series of armored reconnaissance vehicles was designed and built by the firm of Demag, production beginning in 1939, complementing the larger three-ton tracked carriers built by Hanomag. The 250's carried a crew of 6 and a main armament of two heavy machine guns.
With the 250/3 version accommodation was reduced to 4 crewmen to make room for the radio communications equipment.

No less than 14 different models of the basic 250 were produced including supply and cable-laying vehicles, anti-tank and self-propelled guns and observation cars. The engine was a 6-cylinder 4.17 lit Maybach with 7 forward and 3 reverse gears. It's semi-tracked layout conferred on it a respectable cross-country speed of 37 m.p.h. The internal fuel capacity of 31 gallons gave a radius of action of o 186 miles.

The large frame antenna was for the Fu-8 inter-divisional link radio set. Also installed was a Funkprechgerat F radio telephone. The basic scheme of "Greif" was originally an overall Panzer-grey, but when arriving in North Africa it receive a coat of sand-yellow. A dirty mottled appearance was achieved by leaving areas of Panzer-grey and evidence suggests that the vehicle's interior was left Panzer-grey.

Airfix acknowledged the assistance of the Aberdeen Proving Ground in Maryland, USA during the preparation of this kit.

Airfix is an older prolific model company based in the U.K. They make all manner of model subjects in the popular scales. However, over the years they have dropped 1/32nd scale for AFV kits in favor of the now popular 1/35th scale.

The box art show Rommel's "Greif" Sd.Kfz. 250/3 parked in the African desert. Rommel is shown sitting in the crew compartment looking at smoke columes in the distance. Another officer is viewing the smoke through binoculars.

Two other German half-tracks are shown passing by.

Rommel's vehicle is overall earth-yellow with some Panzer-grey bleeding through it in places. It has the German cross on it's sides followed by GREIF in red letters outlined in white. A palm tree and swastika (Afrika Korps) logo is on the right side of the nose above a license late with black number WH-937835 on it.

One side panel has a color side profile of the Grief with "suitable for ages 9 years to adult" below it.

The box end panels say MADE IN ENGLAND and provide Airfix's address in London, UK
WHAT'S IN THE BOX:

The instructions consist of a single sheet that accordion-folds out into 6 pages in 10" x 9" page format, folded again in the center to fit the box.

Page 1 begins with the history of the Sd.Kfz. 250 in English, French and German, followed by GENERAL and SPECIAL instruction and international assembly symbol explanations in the 3 languages.

Page 2 through 6 give a grand total of 14 assembly steps.

There are no parts trees illustrations in the instructions. The parts trees are numbered, but not alphabetized. This means extra time will be needed to search each tree of the part numbers needed for each assembly step. Bad move Airfix !!

I have started assembly of the interior a bit, so some parts have been removed from the trees.
The first tan tree holds: a door, drive sprockets, tow hooks, rear wall, a rolled tarp etc. (50 parts - I guess) 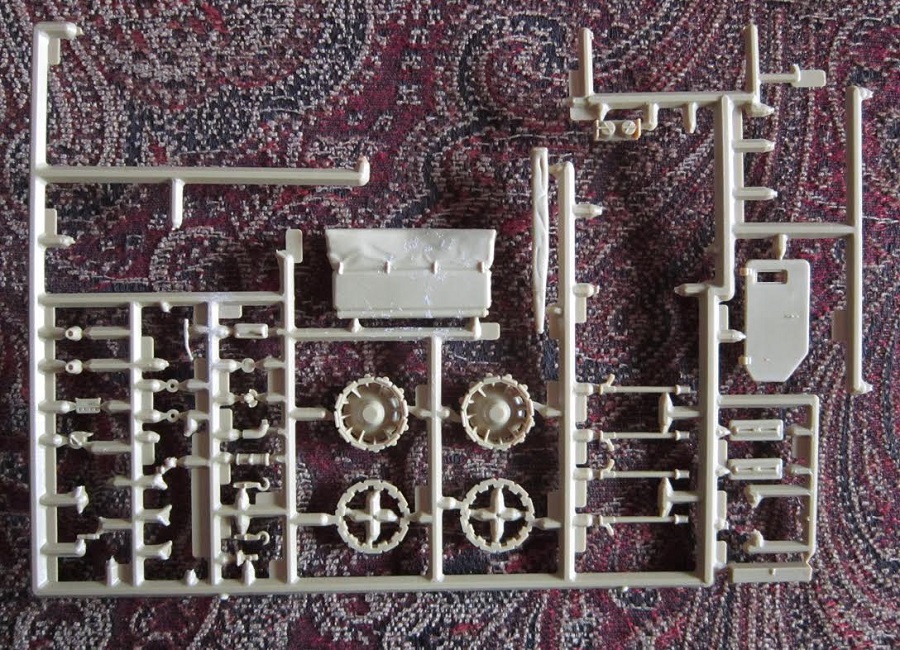 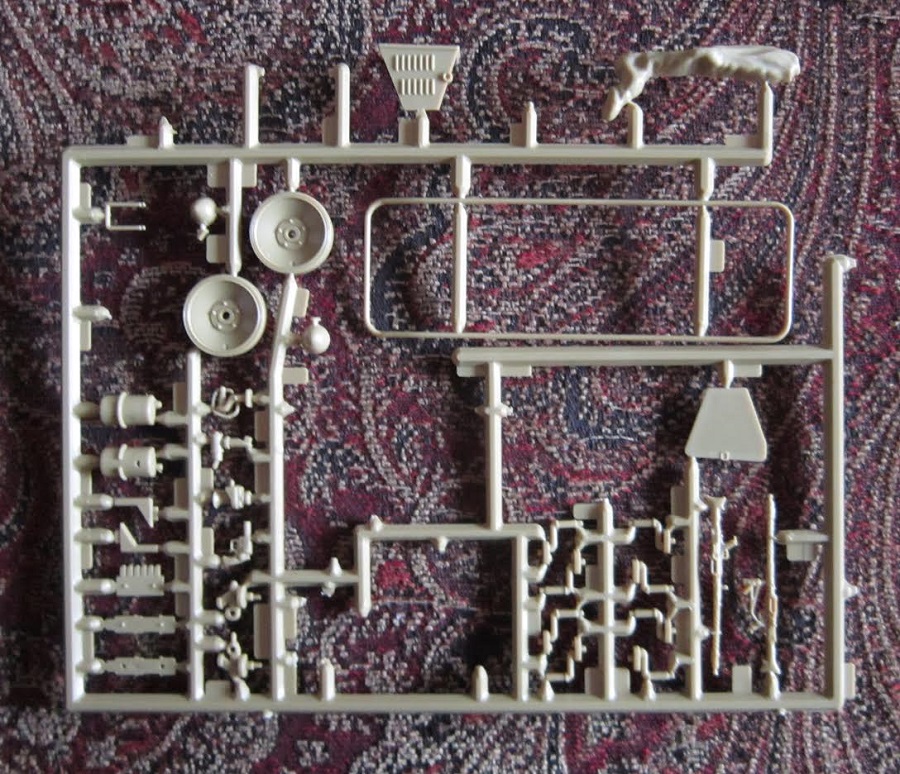 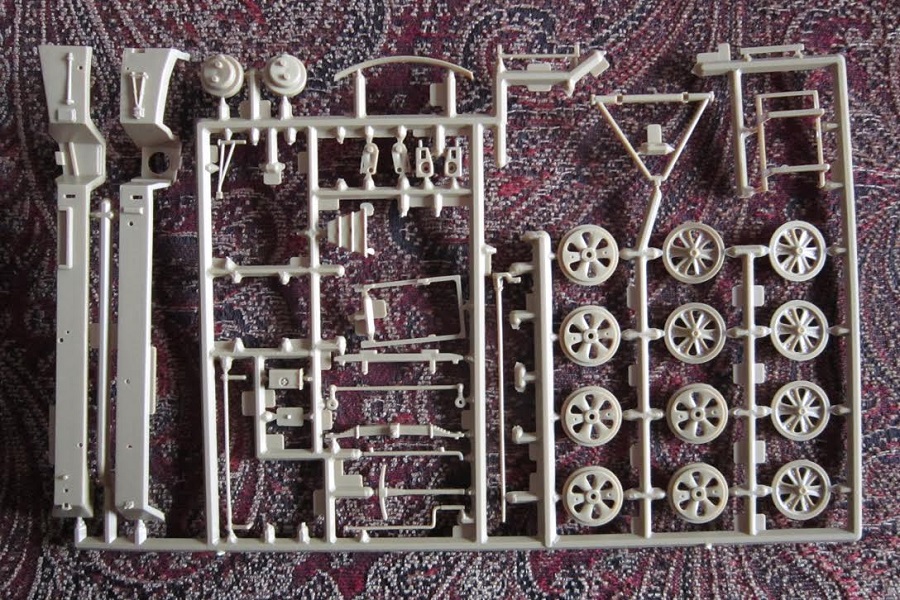 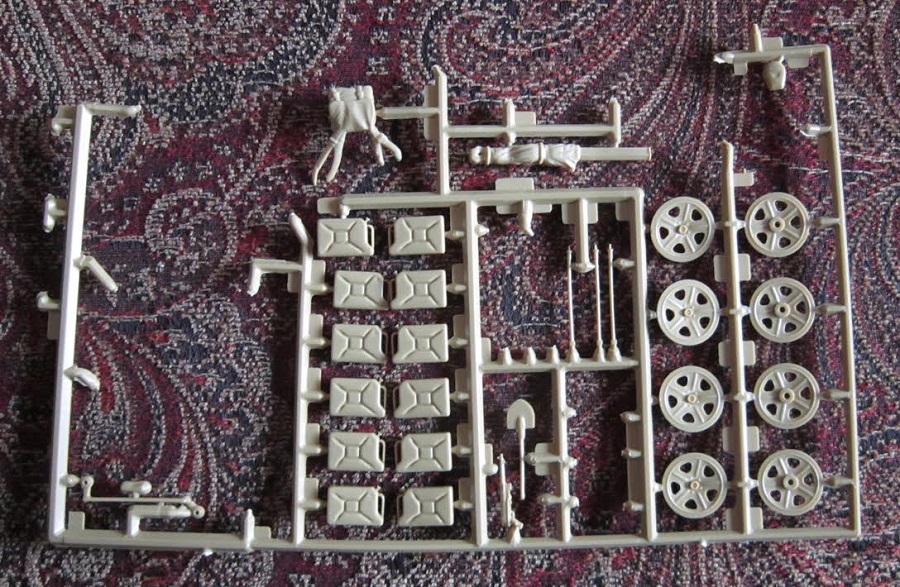 Included in the kit are three figures with one being Rommel. 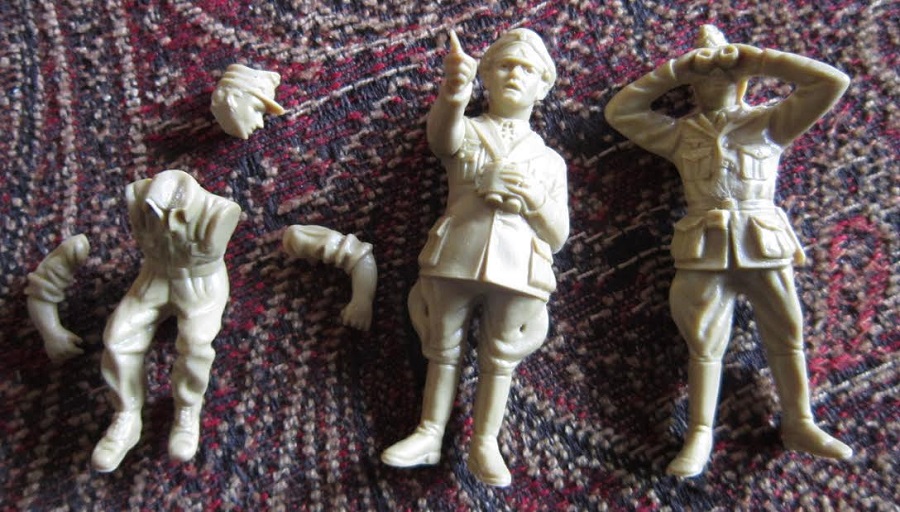 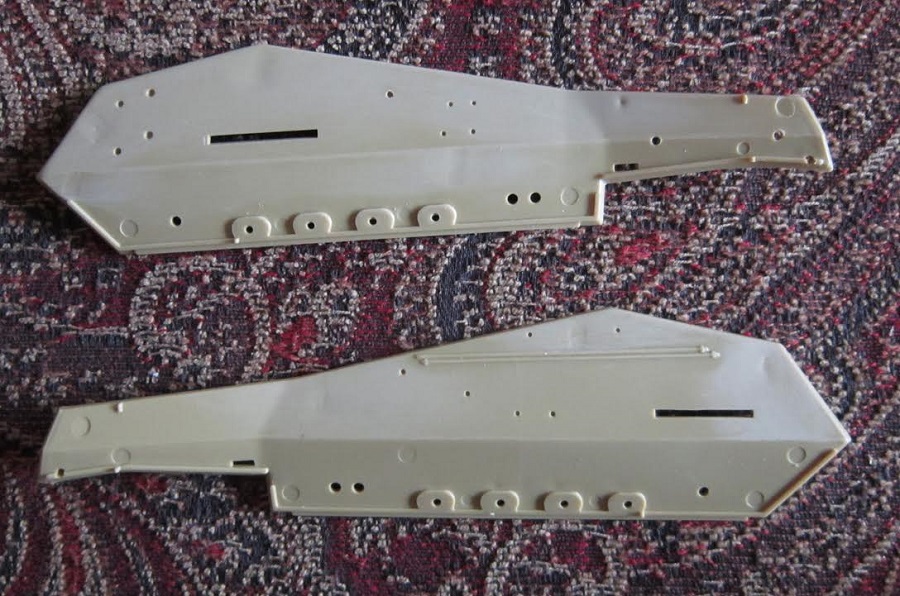 There are two sets of vinyl one piece tracks and two tires for the wheel rims.

The clear parts for the head lights and other items. 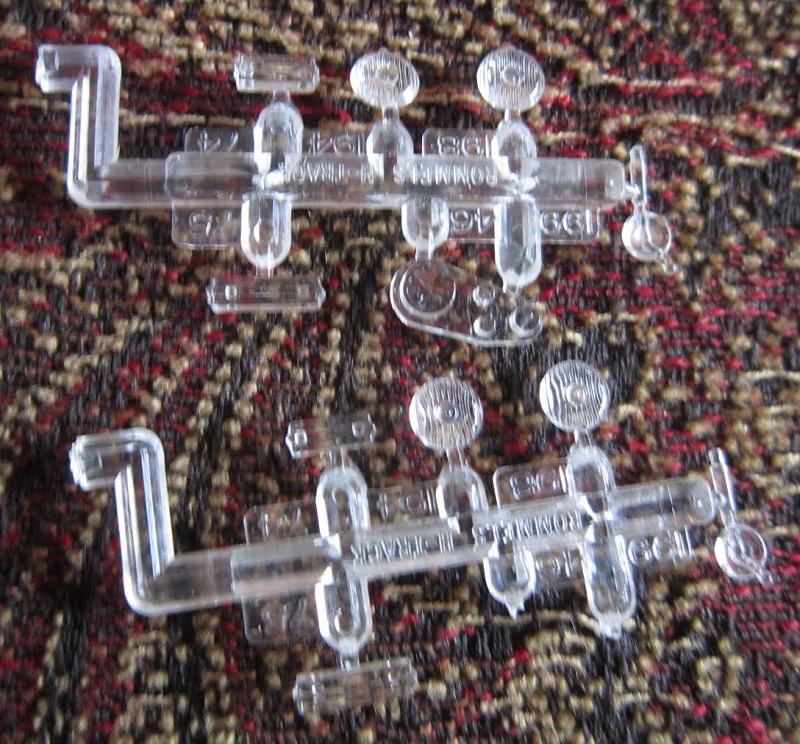 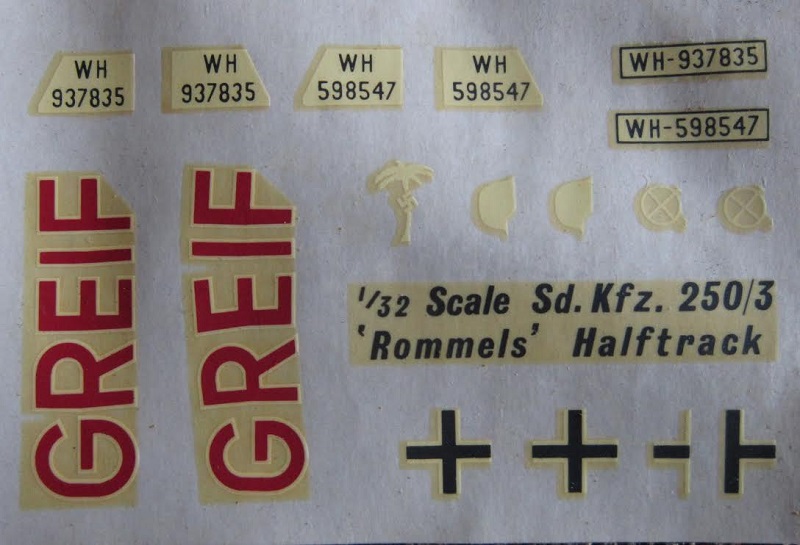 The partially completed hull chassis and interior as well as some of the parts that were loose in the box. 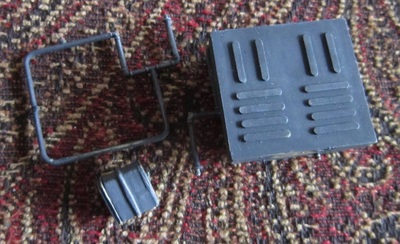 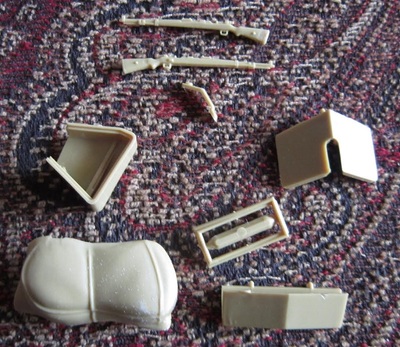 I bought this kit 40+ years ago at my local hobby shop.