The Italian single-seater Fiat C.R. 32 fighter was among the most famous aircraft in its class before WWII. It was designed by Celestino Rosatelli, chief-designer for the Fiat aircraft division. The prototype series of fighters was named C.R. for Coccia Rosatelli (Rosatelli fighter).

The Fiat C.R. 32 was developed from the C.R. 30 fighter in 1932. It was test flown in 1933 and then released for series production. Within several years it becaqme the most popular fighter in the Italian Air Force (Regia Aeronautica). It was distingquished by its excellent performance and flight characteristics and excelled in manoeuverability.

Frequent promotional flights and good marketing strategies won orders for the  C.R. 32 from countries around the world. They served on air forces of Hungary, Austria, Paraguay, Venezuela and even China, where they were utilized against the Japanese.

Hispano-Aviation in Spain built an improved version under the name of HA-132-L "Chirri". The CR 32's had been utilized earlier in Spain during the Civil War in 1936. It was continuously upgraded. In addition to the original model, the Fiat C.R. 43 bis was put into series production in 1935. It was heavier and not as fast, but featured improved firepower such as 2 synchronized machine-guns above the engine and 2 machine-guns on the lower wing. Large fuel tanks gave it a longer range.

Other versions built after 1936 were the C.R. 32 ter and C.R. 32 quater. These were almost identical to the original C.R. 32, differing mainly in modifications to the interior. The C.R. 32 quater was also equipped with a radio. The Italian factory built a totla of 1,212 C.R. 32 aircraft in all versions, and a limited number were manufactured in Spain.

Smer is a model company based in the Czech Republic.

The kit comes in a shrink-wrapped tray and lid type box that has a hinged lid.

The box art shows a C.R. 32 flying above farm land. It is in Spanish Civil War Republican Air Force markings. It is in a base of sand with green and brick red mottling. The undercarriage is grey. The white rudder has a large black X covering it. There are white wing tips on top of the upper wings with 3 black stripes on each wing with a large white letter X. The underside has 3 black stripes under the lower wings. There are black circles underneath the upper wing. The tail has a blue and white circular squadron logo on it. The fuselage has a black circle with a red bow and arrows on it, behind a black fuselage code 3-51.

A 3-view of this scheme is on the bottom of the box in color. Humbrol brand paint colors are called out.

The kit contains 2 pale grey trees of parts and 2 pale grey fuselage halves in a sealed cello bag. Inside a stapled shut cello bag is a die-cut windshield part. The decal sheet and instructions complete the kits contents.

Page 1 begins with the history and specifications of the C.R. 32 in Czech, followed by this again in English.

Page 2 begins with history and specs again in German, followed by international assembly symbol explanations and illustrations of hobby tools being used.

Page 3 has 9 assembly steps on it.

It is overall aluminum with Fascist wing roundels, a red, white and green striped tail with the House of Savoy logo on it. It has a fuselage code of black 155- followed by a red 6 behind the squadron logo of of a red devil's head on a black circle and a blue circle with the Fascist axes on it. A small code is on the extreme rear of the fuselage sides that says Fiat C.R. 32 above MM2830.
​
There are no parts trees illustrations in the instructions.

Also, there are no part numbers in the assembly steps or on the sprues. Bad move Smer. This means you will have to try and identify things by their shape. However, thankfully, there are few parts to contend with. 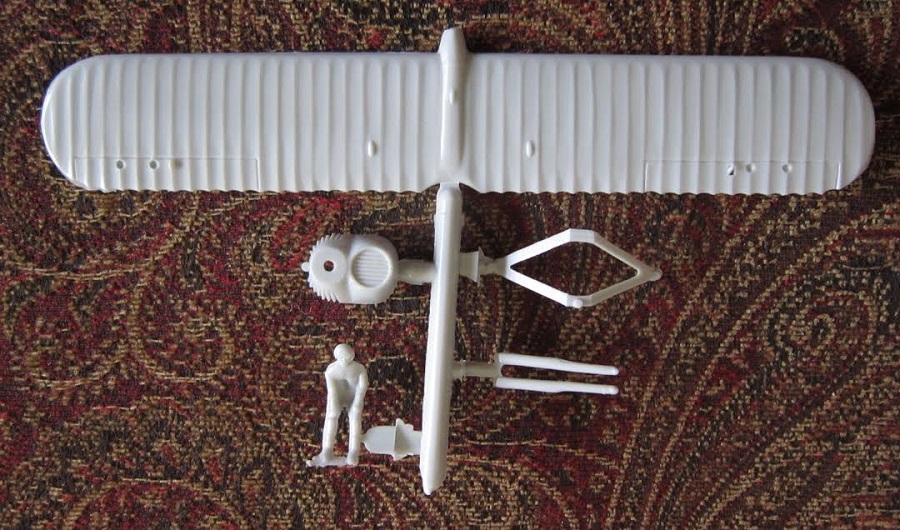 The propeller and elevator parts have broken off the this tree. 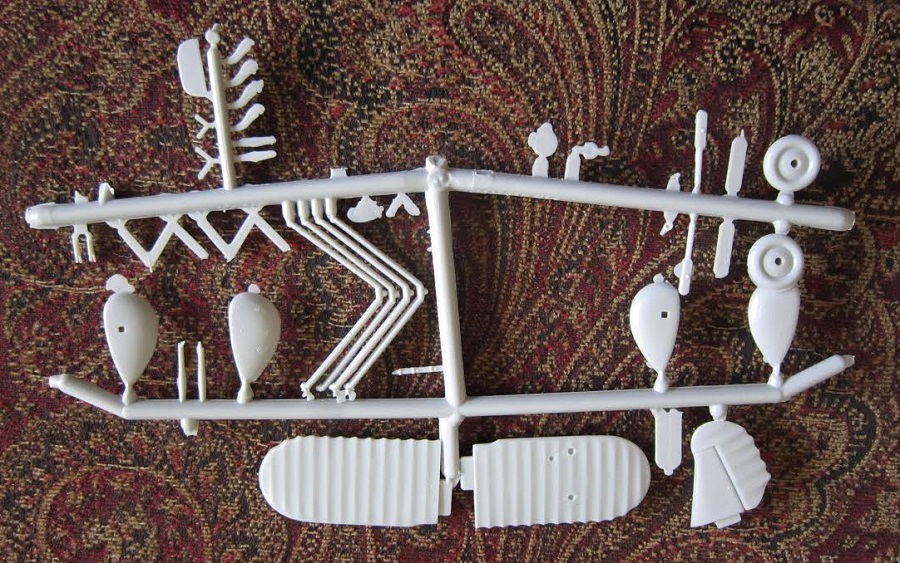 Next are the two light grey fuselage halves.

A windshield has been die-cut from a sheet of clear plastic.
The decal sheet completes the kits contents. 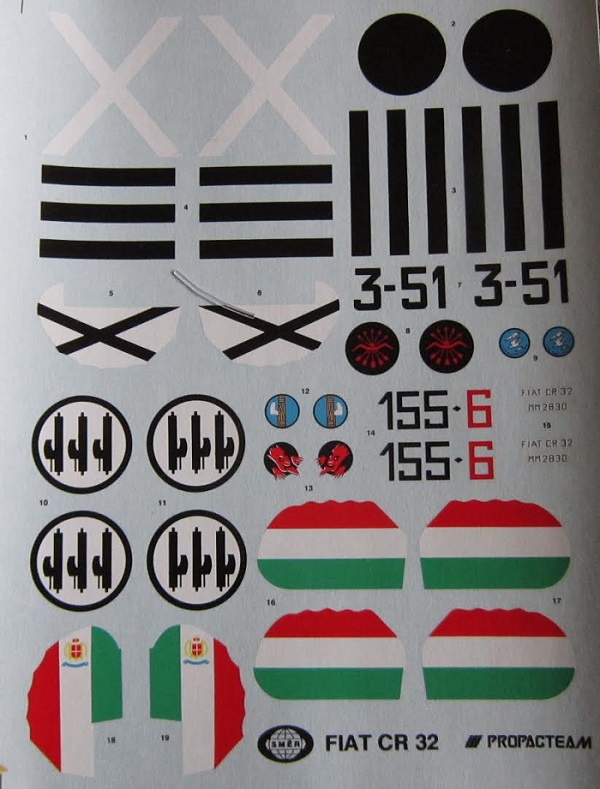 This kit will make up nicely in the right hands. Smer really needed to number things.
I got this kit back in the 90's at my local hobby shop.