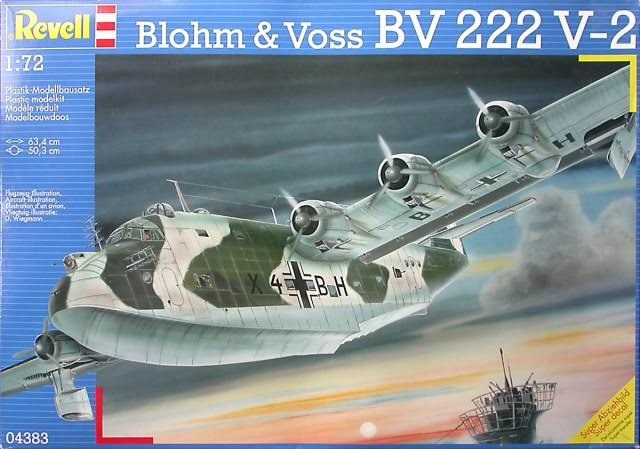 The BV222 was designed to meet the requirement of Deutsche Lufthansa for a long-range flying-boat for flights across the North Atlantic. With a take-off weight of 45 tons, the aircraft was to transport 24 passengers on day-time flights and 16 passengers when Sleeping amenities were required. The aircraft’s first flight was on 7 September 1940.

However, this was during WWII, when aircraft with long-range capacity and large cargo compartments met with the particular interest of the military. So, with a civilian crew, the BV222-V1 flew a first sortie for the Luftwaffe (German Air Force) on 10 July, 1941 for evaluation. It was found that it could transport 92 fully equipped troops or 72 casualties on stretchers.

With a wingspan of 46 meters and six engines, it was the largest flying boat ever built during WWII. It reached a maximum speed of 385 km/h at 4,500m altitude and had a range of 7000 km.

The 7th of August 1941 saw the first flight of the BV222-V2, which – following the experience with the V1 model, was built fitted with defensive armament. The bow held one MG 81, two dorsal turrets were equipped with MG 131’s. Additionally, in the event of an attack, a further four MG 81’s could be fitted in the window bays. The armament also comprised of two weapons stations with two MG 131’s each, mounted in gondolas which were located between the two outer engines above the wings.

Equipped like this, the V2 was meant to operate as a long-range reconnaissance aircraft under the command of the “Fliegerfuehrer Atlantik”. Changes in the design, during the evaluation period, however, prevented this use and it was not until these alterations were completed that the V2 model became operational with LTS 222 (“Lufttransportfuehrer See 222”) on 10 August, 1942 as a transport plane – before finally seeing service as originally planned as a longt-range reconnaissance aircraft with 1./5AGr.129 at Biscarosse, France.

During the whole period of its operational service, the V2 continuously altered its appearance. Shortly after its first flight, the gondola armament was removed. The rear rotating turret was dismounted and some windows in the bow omitted from the design. For its use as for long-range reconnaissance missions, it received FUG 200 “Hohentwiel” search radar, a type of ASV (air-to-service-vessel search radar) with 3 antenna’s mounted in the bow, as well as FUG 216B rear-view warning radar fitted on top of the wings. In July 1944, the V2 attracted attention during Operation “Schatzgraeber” (Treasure Digger).

Schatzgraeber was the code name of a German weather station on Alexandra Island in the Arctic, the crew of which had fallen ill and was to be evacuated by a FW-200C-3 of KG40. During the landing, the undercarriage of the FW-200 aircraft was damaged. The rescue operation to be extended, which also involved a V2, ordered from Biscarosse for a sea rescue and supply role. Specially, for this sortie, a winter camouflage coat of white-wash was applied on top of the standard camouflage pattern in Billefjord, Norway.

The marking R4+BH and German insignia remained in view. The BV222-V2 dropped the required spare parts and further supplies over the weather station on 8 July, 1944, as a landing on those waters proved to be impossible. After that, the rescue operation went according to plan.
​THE KIT:

The kit is by Revell of Germany. It comes in a huge tray and lid type box that measures 20” x 13 ¾” by 3 ¼” deep. It is rather flimsy cardboard for this big a box and mine rapidly has become badly crushed sitting in my model stash.

The boxart shows the BV-222-V2 flying over a U-boat. It has the fuselage code X4+BH in black letters, which is repeated below the wings. It is shown in the camouflage scheme that it wore for the rescue mission, described above in the history.

One side panel has suggested color listings, a mention of features on the model, and 5 color photos that are walk-around shots of the model made up. The other side panel gives a one paragraph history of the BV-222 in 4 languages (including English) and the features of the kit in some more languages.

The kit has a copyright date of 2002. It is recommended for modelers over the age of 13 and has a difficulty of 5. This means that it is a kit of over 150 pieces and requires a very high level of skill on the part of modelers.

The outside of the bottom tray has color illustrations of 6 other aircraft kits that Revell of Germany markets:

There is also a color illustration of paints, glue and a rudimentary airbrush that Revell markets.
​WHAT'S IN THE BOX:

Inside are 6 huge light gray trees of parts, a large clear parts tree, a large decal sheet, the instructions and a single sheet that is printed on both sides with “Hazard warnings” in no less than 18 languages, including English.

The gray trees are in 3 sealed cello bags and the clear tree has its own cello too. The decal sheet has a tissue to protect the face of it, however it had come loose and was floating around the box, so a waste of time by Revell really.

None of the trees are alphabetized, but they do have the part numbers next to the parts. This means that you will have to try and find the parts on the part tree illustrations in the instructions and then look for them on the tree that is illustrated with the part on it. This will take some searching and will make for real drudgery and extra work that should not have been forced on us modelers. Bad move Revell.

I will not attempt to name all the parts on the trees. It would be a near impossibility, given the great number of them in the kit. I will name a few, then readers can see the pictures of these trees for themselves. 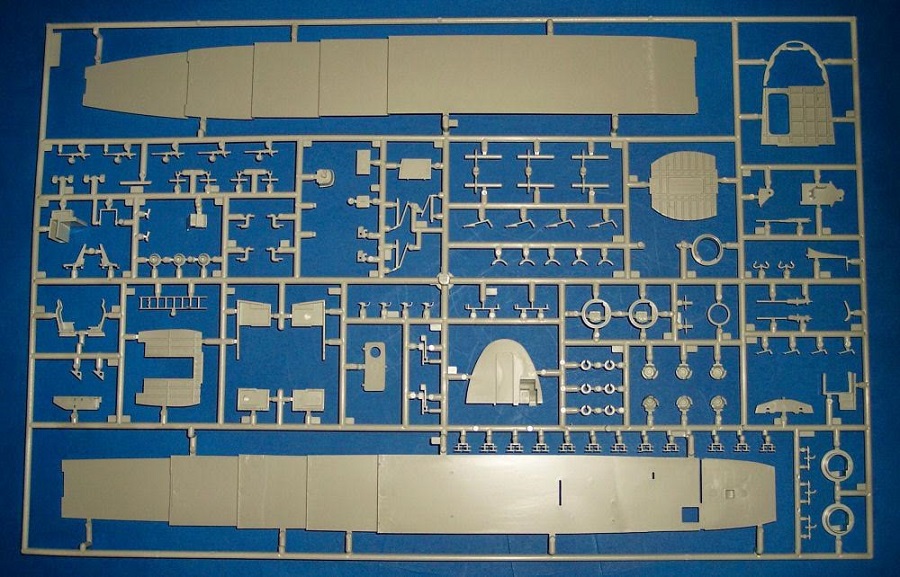 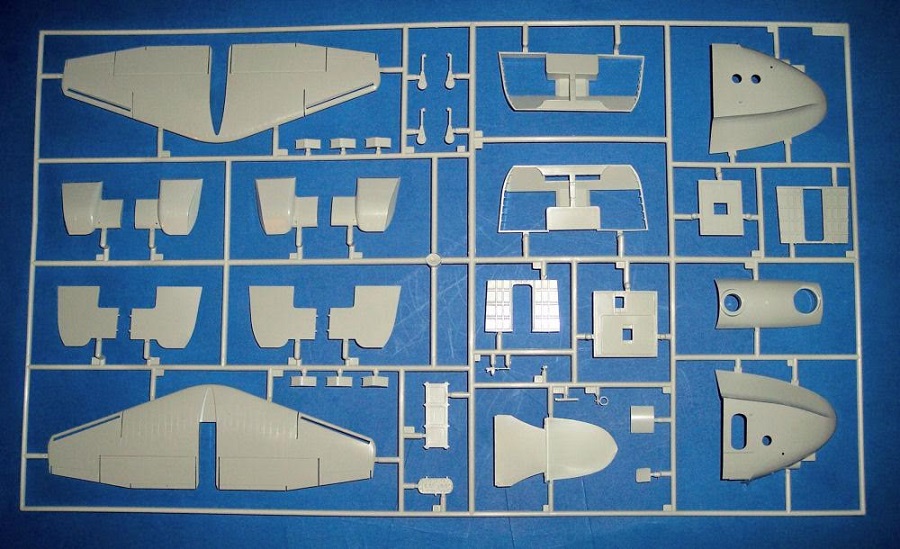 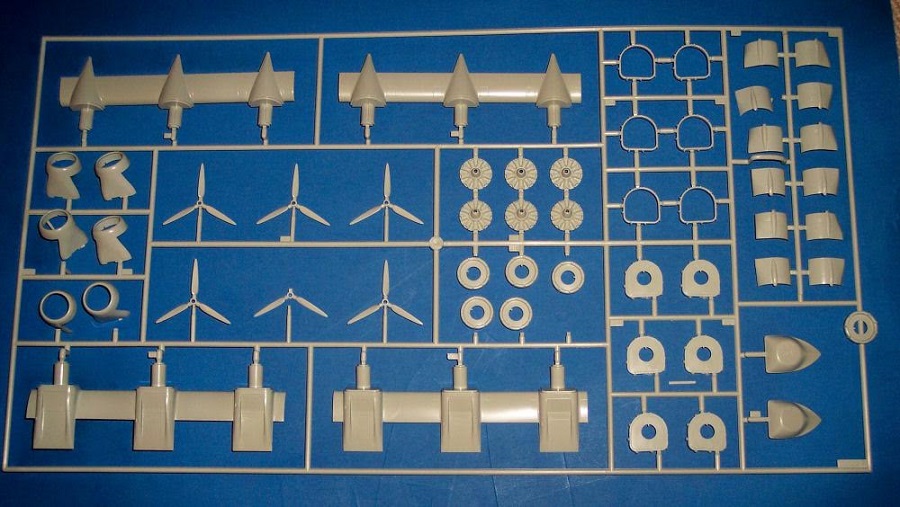 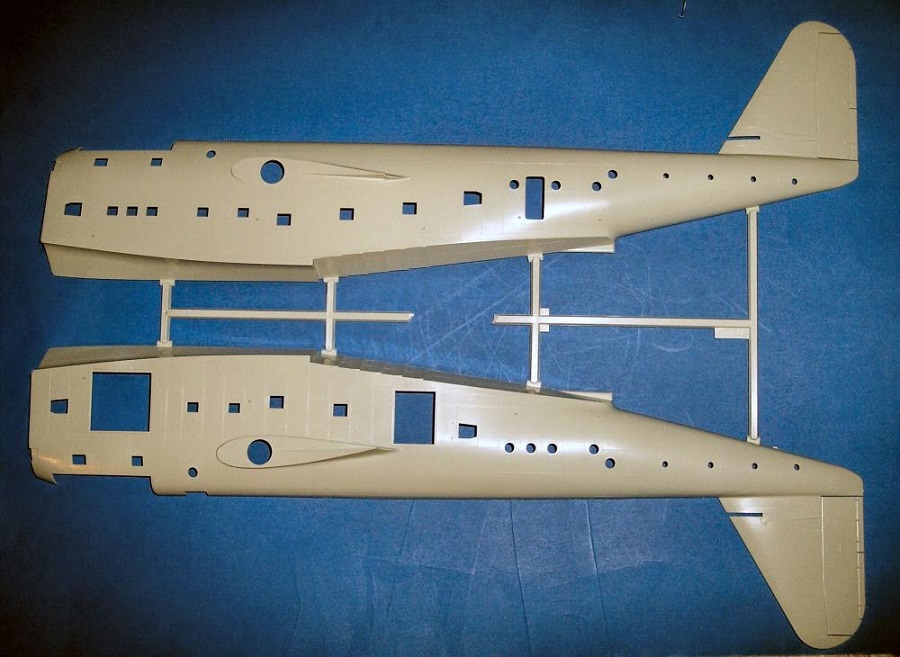 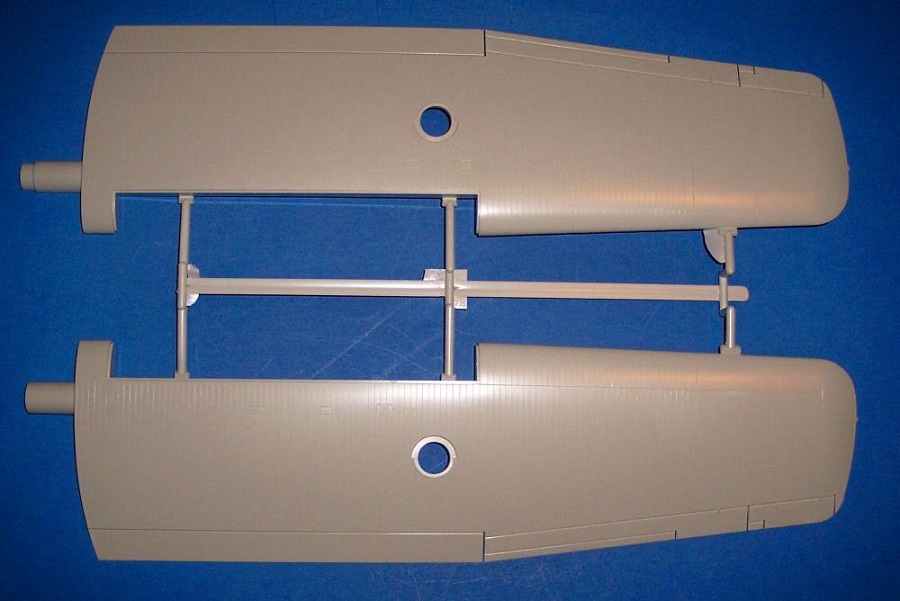 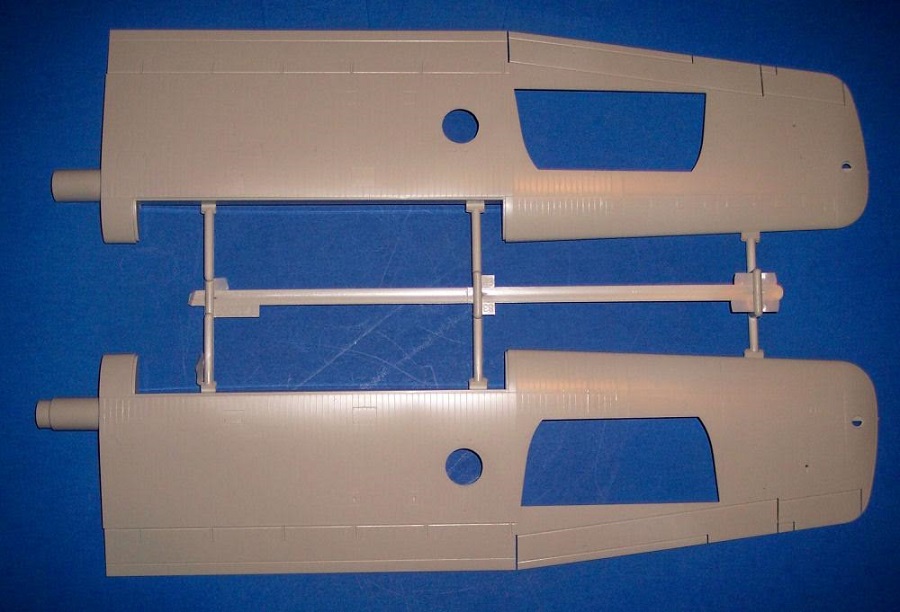 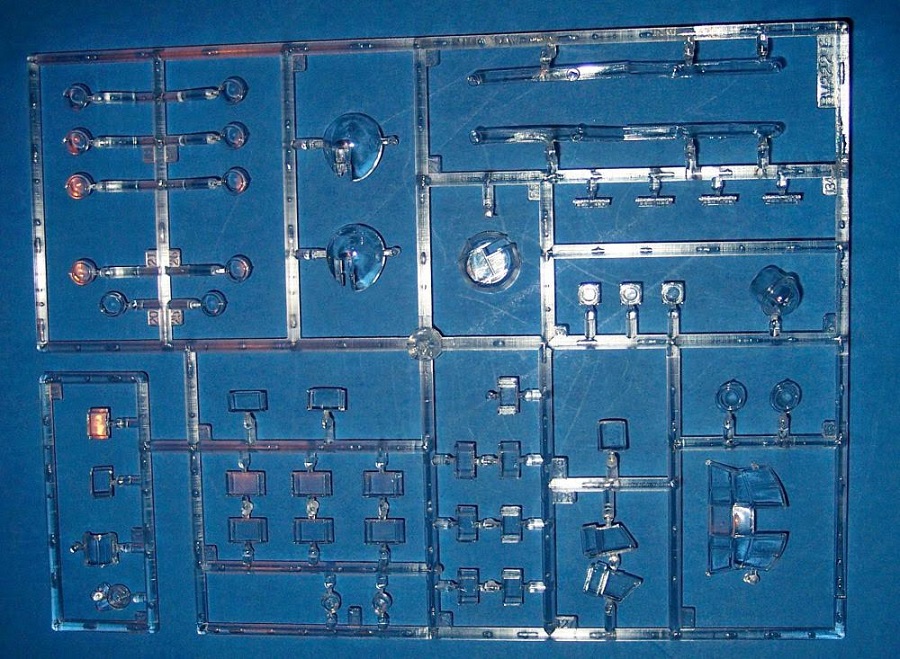 ​The large decal sheet and the instructions complete the k its contents.

This sheet has the fuselage code of X4+BH only in black, the German crosses, a squadron logo of a blue circle with a viking ship on it, the dashboard instruments and no less than 129 stencil markings, 6 white lines and 18 black lines to apply to the model.

Enough of these to keep you busy for a month and perhaps even drive you nuts.

There are no swastikas to put on the tail. This is a big no no in Germany, where the kit is made. You will have to get an aftermarket sheet of ones the appropriate type and size.

There are no crew figures in the kit 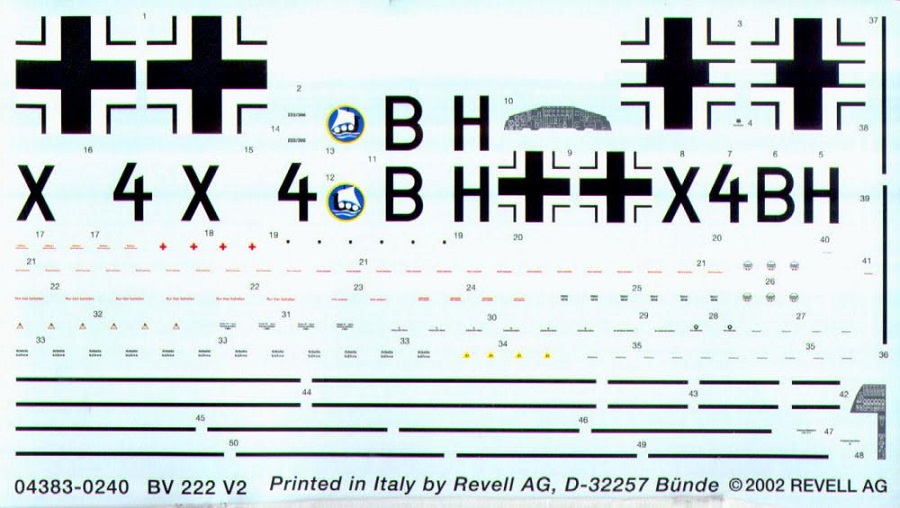 ​The instructions consist of a unbound booklet of 20 pages in 8 ¼”x 11 ¾” format, printed on newsprint type paper.

Page one begins with a black and white photo of the aircraft made up. This is followed by the history of the BV-222 in German and English.

Page 2 begins with “read before you start” instructions in 18 languages, including English. This is followed by some illustrations of how to use tools clamps and brushes to build the model.

Page 4 has a listing of colors, suggested for use to finish the model.

Page 5 has illustrations of 4 of the parts trees.

Page 6 has illustrations of 3 more of the parts trees. This is followed by the first 5 assembly steps.

Colors are called out in each assembly step, where the parts should be painted before assembly.

Pages 7 through 17 give a balance of no less than 71 assembly steps. Wow! That’s a lot! So, this is no weekend project.

Pages 18, 19 and 20 give painting and marking illustrations of the same V2 aircraft, with the fuselage code of X4+BH at various times in its operational history, from 1944-45.
These changes, for the most part, were minor. Upper surfaces in RLM 72 & 73, lower surfaces in RLM 65.

At one time with the fuselage code repeated under the wings, and another time without. Also with the upper camouflage colors overpainted with stripes of white wash.

The engines are HANDED, so you will have to watch and get them on the right sides.

When the model is made up, it will have a 26” wingspan and be 20” long. A real shelf-eater.
It has 4 gun positions in the sides, a nose gun and upper turret.

It has an upper crew deck and a lower cargo deck. However, I don’t think these will be seen after assembly. You will just have to be happy knowing that they are in there.

There are complete engines for each of the 6 cowlings. The cowlings could be left off to show these in some kind of a maintenance diorama if preferred. There are two dorsal wing turrets. The wing floats can be showed deployed or stowed.

The second ommision from the kit, other than a swastika to put on the rudder, is that there is no cradle to sit the hull on. So, it will be displayed tipping to one side onto one of it's wing floats. Not a neat way to display it.

However, I also purchased a resin and PE set of the beaching trolley for this aircraft. I think it's a CMK brand kit. I don't know where I buried it in my stash, but when I find it I will review it here.

I highly recommend this kit to modelers that have a few other aircraft kits of this complexity with a lot of parts to assemble. It is not for the novice and not a weekend project.
Kit was courtesy of my wallet years ago.