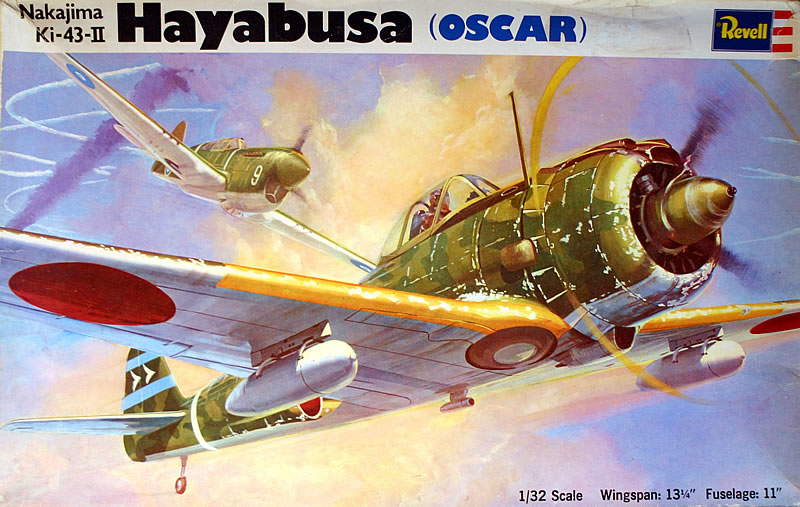 In the years preceding WWII, Japanese fighter design philosophy favored the light, highly maneuverable machine over more heavily armed and armored aircraft of less agility. Air battles were expected to be the twisting, turning "dogfight" type of melee seen in WWI, so emphasis was placed on aerobatic agility and ability in both plane and pilot.

With this in mind and the success of the type 97 Ki-27 monoplane fighter an established fact, the Nakajima Hikoki K.K. was launched upon a design program aimed at producing a 300+ mph fighter with the maneuverability of its predecessor.

The resultant aircraft entered service in October 1941 as the Ki-43 Hayabusa (Peregin Falcon) which was received with much skepticism due to its advanced (for that time) features, such as and enclosed cockpit and retractable landing gear. It was sluggish in maneuverability compared to the lighter fighters until the "butterfly" combat flap was adopted. This changed the whole performance picture of dog-fighting.

The Ki-43 became quite popular with its pilots and became the standard Japanese Army Air Force fighter. The Ki-43 was the most often encountered J.A.A.F. type when war came to the China-Burma-India theater and it received the Allied name "Oscar", enjoying huge success over opponents who were conceded to be flying inferior and outnumbered aircraft. However, in 1943, it was obvious that Allied designs had passed the Hayabusa in performance. But development continued nevertheless until the end of the war.

In retrospect, the "Oscar" was the best fighter of the J.A.A.F. had to offer at the war's outbreak. But much like the P-39 and P-40 of the U.S. Army Air Corps, it was soon passed by more advanced designs.

It was a compromise between old and new fighter philosophies, but more so in the "Oscar's" case because in the quest for lightness, armor and armament were sacrificed to the extent that the fighter never gained the reputation for "toughness" enjoyed by U.S. warplanes.

The "Oscar" soldiered on for the war's duration, and after the war was employed by the French in Indo-China and by the communists in Indonesia. It deserves far more recognition than has been accorded to it. Overshadowed as it was by the Zero, a type for which it was often mistaken, it carried the fight for the J.A.A.F. throughout the war.

Revell is an older prolific model company based in Venice, CA. In recent years they have become associated with Monogram.

The box art shows an Oscar being pursued by a British P-40. The Oscar is in a mottle of a dark green over a lighter green and has a light gray undercarriage. It has yellow wing leading edges, a white fuselage band and 2 blue horizontal bands on the rudder with 2 white chevrons between them. The paint on the Oscar is quite worn.

The P-40 is in a wave pattern of 2 greens over a light blue undercarriage. It has a white 9 on the side of its nose and 2 narrow white fuselage bands and British roundels.

One side panel of the box has color illustrations of the detailed instrument panel, drop tanks, movable wheels, pilot figure in flight suit, detailed Nakajima HA-115 engine, removable cowling panels and engine. Kit has a clear-canopy, landing-light lens and gun sight and a full color decal sheet. Copyright date is given as 1973. Revell is listed as being in Venice, CA and the kit was made and printed in the USA.

​The other side panel has the history of the Oscar, suggested Pactra brand paints to use and a membership form to join Revell's Master Modelers Club.

The instructions consist of a single-sheet that accordion-folds out into 6 pages in 8 1/2" x 11" page format.

Page 1 begins with a black and white repeat of the box art, over the first 2 assembly steps.

Page 2 through 6 give a balance of a grand total of 10 assembly steps.

Step 10 is the decal placement and some vague color instructions. We are only told to paint a black anti-glare panel in front of the windscreen and spray olive spots onto the upper surfaces, but no color mentioned overall for the upper surfaces.

Also, to use the yellow strip on the decal sheet on the leading edges of the wings. The undercarriage color is not mentioned either. Bad scheme directions.

Parts are not cello bagged. Trees are not alphabetized  or illustrated in the instructions. Only the smaller parts have part number tabs next to them on the parts trees. Bad move Revell! 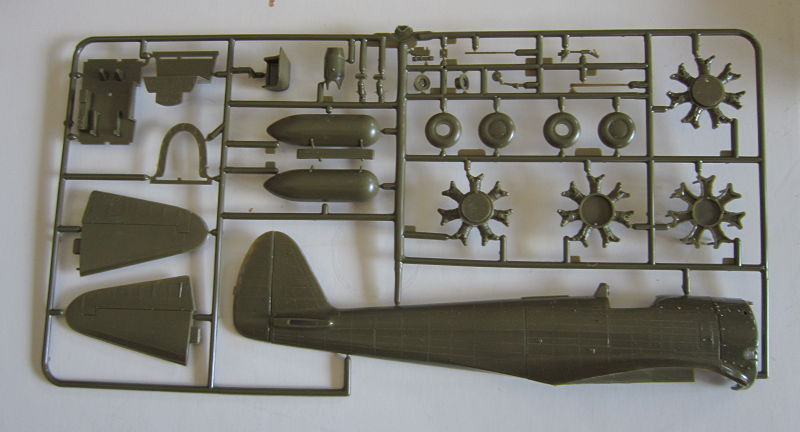 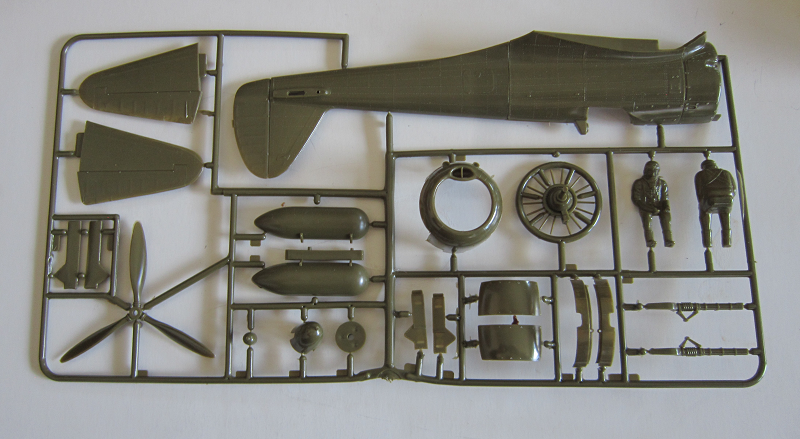 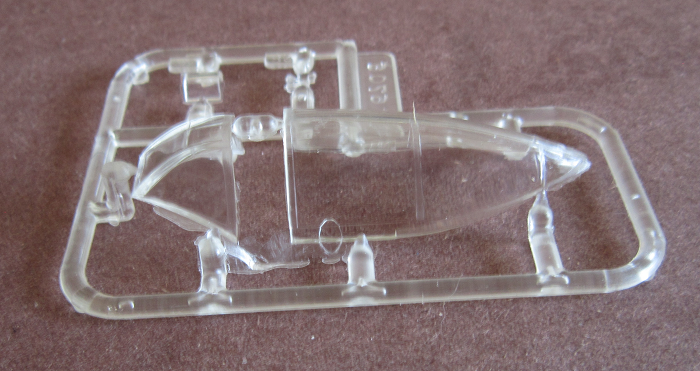 ​The decal sheet holds markings for the box art scheme only. 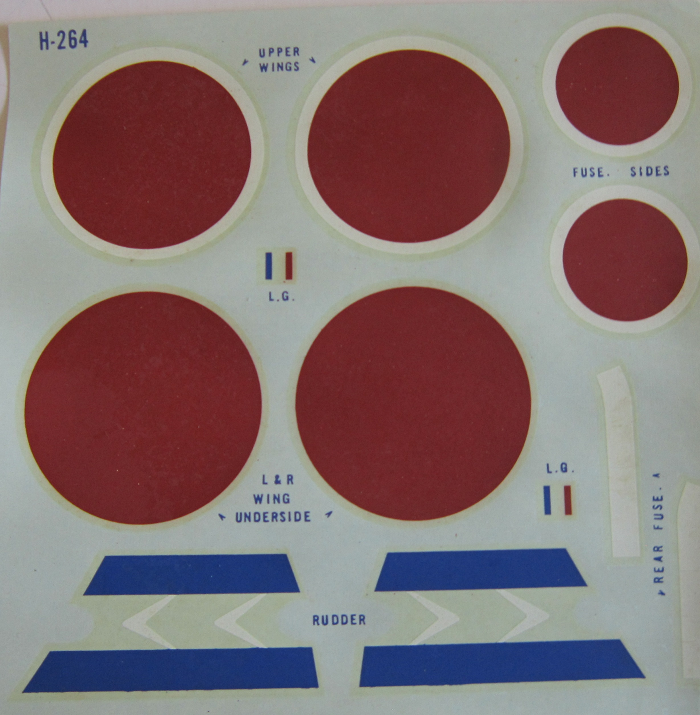 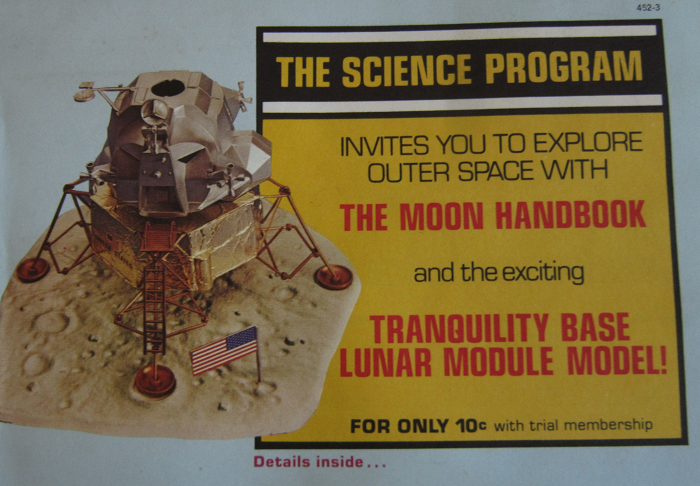 The model has nicely done raised details and engine. Flaps are all molded solid
​Highly recommended.