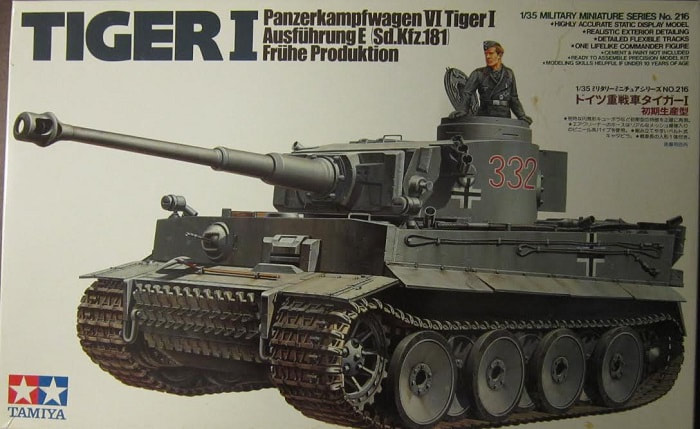 Tiger I  is the common name of a German heavy tank developed in 1942 and used in World War II. The final official German designation was Panzerkampfwagen VI Tiger Ausf.E, often shortened to Tiger. It was an answer to the unexpectedly impressive Soviet armor encountered in the initial months of the Axis invasion of the Soviet Union, particularly the T-34 and the KV-1. The Tiger I gave the Wehrmacht its first tank which mounted the 88 mm gun in its first armored fighting vehicle-dedicated version: the KwK 36. During the course of the war, the Tiger I saw combat on all German battlefronts. It was usually deployed in independent tank battalions, which proved highly effective.

While the Tiger I was an excellent design, it was over-engineered, using expensive materials and labor-intensive production methods. Only 1,347 were built between August 1942 and August 1944. The Tiger was prone to certain types of track failures and breakdowns, and limited in range by its high fuel consumption. It was expensive to maintain, but generally mechanically reliable. It was also difficult to transport, and vulnerable to immobilization when mud, ice and snow froze between its overlapping and interleaved Schachtellaufwerk-pattern road wheels in both summer and succeeding winter weather conditions, often jamming them solid. In 1944, production was phased out in favor of the Tiger II.

The tank was given its nickname "Tiger" by Ferdinand Porsche, and the Roman numeral was added after the later Tiger II entered production. The initial official German designation was Panzerkampfwagen VI Ausführung H (‘Panzer VI version H’, abbreviated PzKpfw VI Ausf. H), with ordnance inventory designationSdKfz 182, but the tank was re-designated as PzKpfw VI Ausf. E in March 1943, with ordnance inventory designation SdKfz 181.

Today, only a handful of Tigers survive in museums and exhibitions worldwide. The Bovington Tank Museum's Tiger 131 is currently the only one restored to running order.
​THE KIT:

Tamiya has re-done the Tiger in other kits. One of which is reviewed elsewhere on this site.

However, the trees in the two kits do not match and are totally different as you can see.

The box art shows a Tiger posed against one of Tamiya's signature all white backgrounds that they use on the majority of their box arts.

It is overall panzer-grey with German crosses on the turret and hull sides and the red turret no. 332 outlined in white.

A tank commander wearing a black uniform and side cap is looking out of the top turret hatch. Multiple black and white kill rings are around the gun barrel.

One side panel has a 3-view of a Tiger with Panzer Regiment 2, Russia, Spring 1943. It is in a base of dark yellow with dark-green splotches. It has the German cross on the hull sides and a turret no. S33 outlined in white.

​This is followed by the history of the Tiger in Japanese, a color illustration of the tank commander figure, a copyright date of 1997 for the kit, MADE IN JAPAN and Tamiya's street address in Shizuoka City, Japan.

The other side panel has a profile of a Tiger with Spz.ABT. 101, Russia, January 1944. It is in an overall base of earth yellow covered with winter white-wash. Next is a profile of the box art subject. It is with sPz.ABT. 503, Russia, Summer 1943, followed by the history of the Tiger in Japanese. 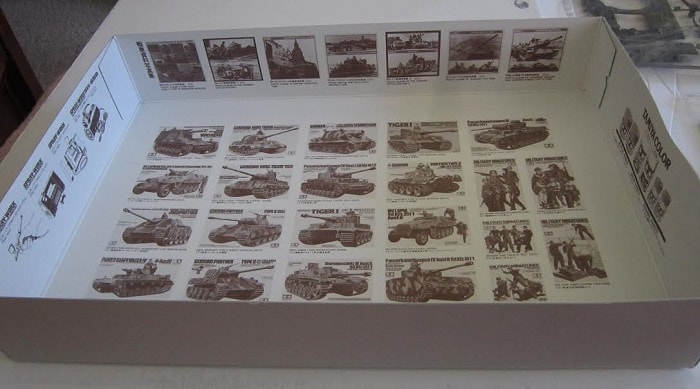 This kit contains 5 panzer-grey trees, a panzer-grey hull tub, black vinyl treads and a tube, the decal sheet and instructions.

Page 1 of the main instructions begins with a black and white repeat of the box art, followed by one paragraph histories of the Tiger in 8 languages, including English.

Below this is instructions for how to configure 6 different Tigers:

Pages 3 to the top of page 10 give a grand total of 20 assembly steps.

The bottom of page 10 has an after market service card in Japanese.

The 4 page other instructions is for the painting and marking instructions. It is in 4 languages, including English.

Page 1 has a 3-view of a Tiger in overall panzer-grey. It has a white turret no. 213 on the sides and rear of the turret. It is with sPz.ABT 502, Russia 1944. German crosses on the sides of the turret are hidden behind the spare tread links carried there. No unit marks are on it.

Page 2 has two 3-views. The first one is overall Panzer-grey with German cross followed by a red 332 outlined in white on the turret sides and rear. It is with sPz.ABT 503, Russia, October 1943. No unit marks shown.

The second Tiger is overall earth-yellow with no German cross or unit markings. It has a black 131 on the sides and rear of the turret. It is with sPz.ABT. 504, Tunisia, April 1943.

Page 3 has a 4-view at the top. It is in a base of earth yellow with dark-green and red-brown squiggles. It has the yellow no. S45 outlined in black on the turret sides and rear. German cross is hidden under the spare track links on side of turret. It has a unit logo of a white shield with a key on it.

At the bottom of the page is a profile of a Tiger in winter white-wash with no. S04 on turret sides and black and white kill rings around the gun barrel. German cross also hidden behind links.
This is part of a 3-view that continues on the top of page 4. It is with sPz.ABT. 101, Russa, January 1944

Page 4 also has a 4-view at the bottom of a Tiger in a base of earth-yellow with dark-green squiggle over it. It has the white outline of no. S33 on the turret sides and rear. It has  white unit marking of two vertical bars with a horizontal bar at the bottom on the left side of the hull front and the left rear fender. The German cross is only on the left rear of the hull. It is with Panzer Regiment 2. 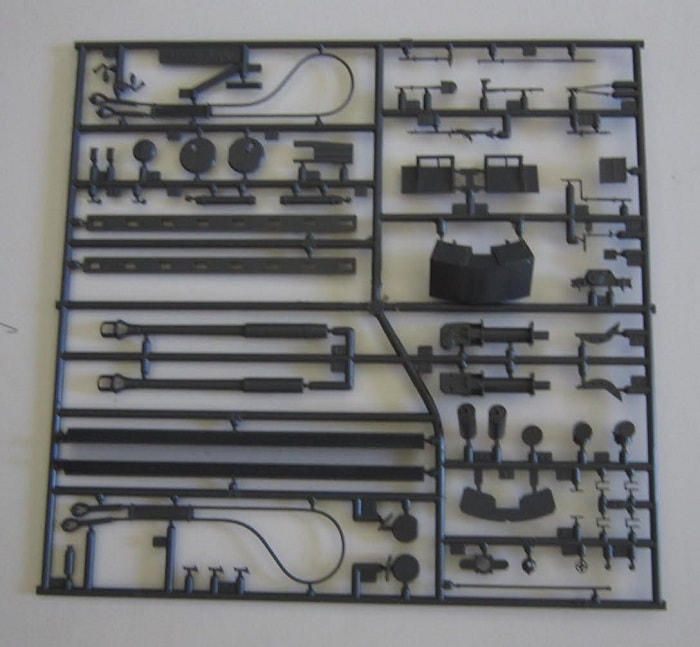 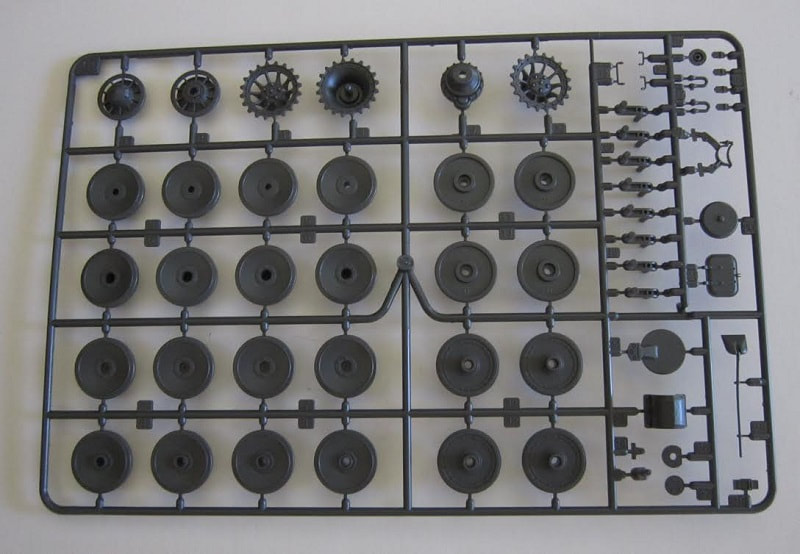 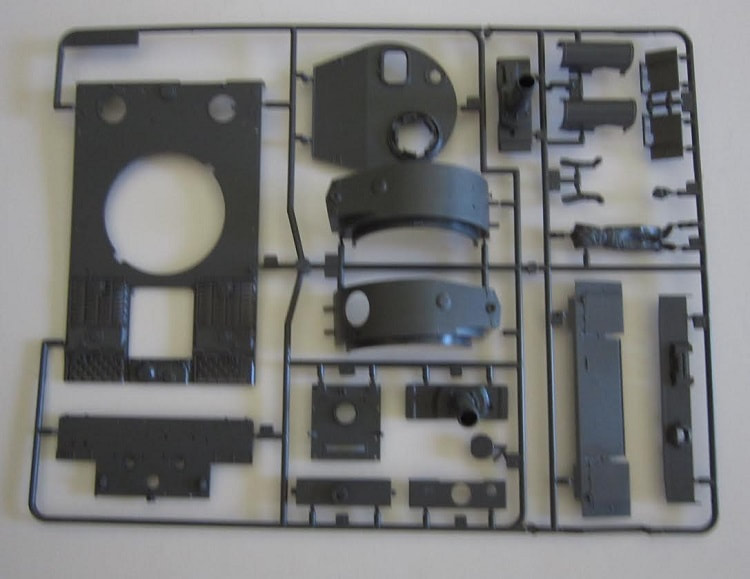 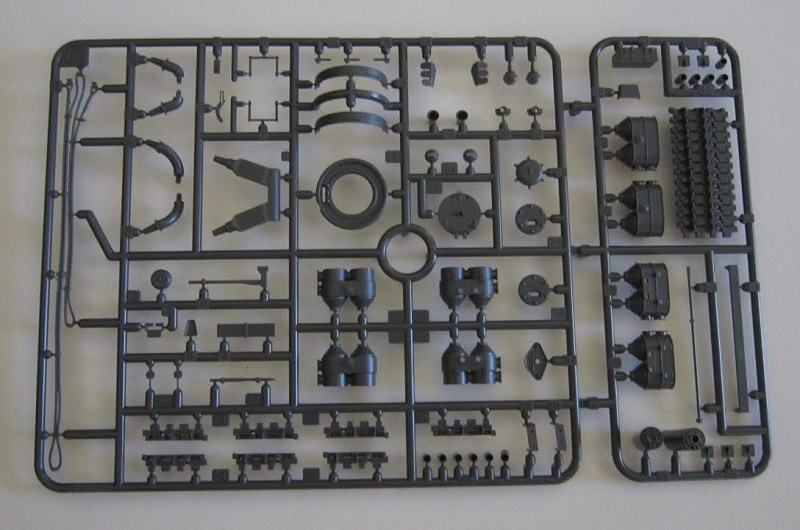 ​The one piece panzer-grey hull tub part is next.

Tubing is included in the kit for the Feifel air cleaners.

The last item in the box are the kit decals for the versions mentioned above. 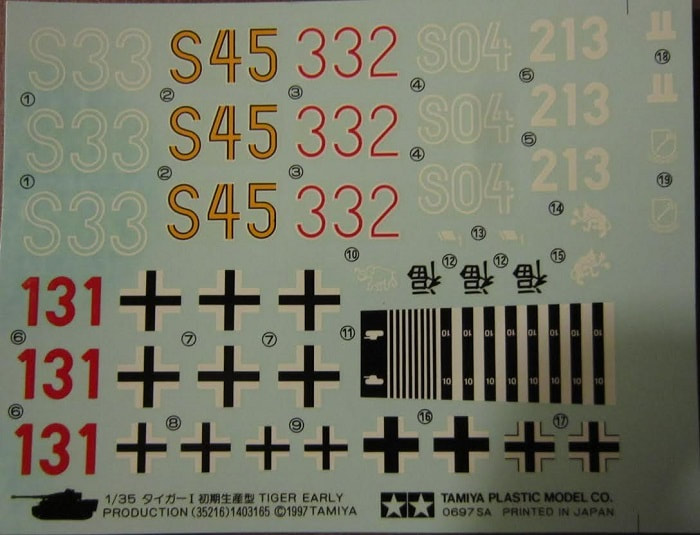 I have a set of photo etch brass air intake screens from my Armor Research Company that I will add to the model as these are not included in the kit. 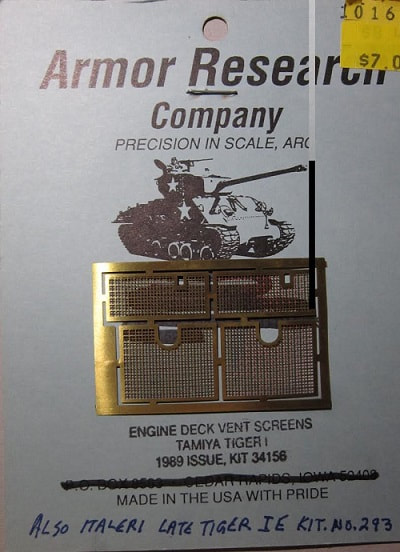 There is a small sheet in the kit of "Important info concerning this kit" on both sides of it in 13 languages, including English, over Tamiya's branch office address in Germany.

This is a very nicely detailed kit and better than the earlier Tiger kit by them that I reviewed here on the site.

I purchased my kit at my local hobby shop back in the 90's.