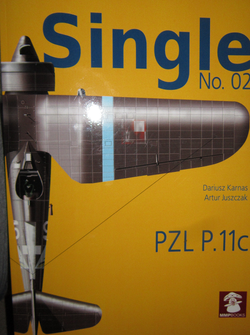 The PZL P.11 was a Polish fighter aircraft, designed and constructed during the early 1930s by Warsaw-based aircraft manufacturer PZL.

Possessing an all-metal structure, metal-covering, and high-mounted gull wing, the type held the distinction of being widely considered to have briefly been the most advanced fighter aircraft of its kind in the world.

The design of the P.11 commenced during the late 1920s, initially designated as the P.1. The primary individual responsible for its development was Polish aeronautical engineer Zygmunt Puławski, who has been attributed as having designed many of its innovative features.

While the majority of the world's forces were still using biplanes, the P.1 used a high-mounted and aerodynamically clean gull wing, which provided the pilot with a superior field of view.

The P.11 served as Poland's primary fighter defence throughout the 1930s, including during the Polish campaign of 1939 by neighbouring Nazi Germany.
However, as a consequence of the rapid advances that had been in aircraft design during the late 1930s (seen in such fighters as the Messerschmitt Bf 109), it was outclassed by its rivals at the onset of the war.

The majority of the Polish Air Force's P.11s were destroyed during 1939; however, it is believed that as many as 36 were flown to Romania and were subsequently taken over by the Romanian Air Force.

The P.11 was a considerable export success. During October 1933, deliveries of Polish-built P.11bs to Romania commenced.

A dedicated export model of the P.11, which was designated as the PZL P.24, was developed during the late 1930s. Reportedly, Greece, Portugal, Yugoslavia, Turkey and Republican Spain were at one point interested in procuring the P.11; these eventually resulted in several nations, including Bulgaria, Greece and Turkey purchased the P.24 instead.

Mushroom Model Publications (MMP) is based in the UK. All their books are printed by Stratus in Poland in the English language.

The front and back cover are bright yellow.

The cover art shows a PZL P.11c top view. It's left wing is wrapped round the book onto the back cover.

It has a white fuselage number 10, followed by a white triangle with a flying black owl that has yellow wings with red leading edges and the Polish Air Force checkerboard insignia on the sides of the rudder and underneath the wings with black serial no. 170 under the right wing and N under the left wing. The checkerboards under the wings have the white sections over-painted with the dark blue-grey. There is a white band on top of the right wing.

The book contains a 1/72nd scale 7-view line drawing of the P.11c and a illustration of the radial engine. Plus illustrations of the bulkheads inside the fuselage.

The finely grooved corrugated skin areas are shaded in these drawings.
There is a 1/48th scale 4-view line drawing of the P.11c that also has illustrations of the bulkheads.

There are 4 color photos of the cockpit interior and instruments and 2 black and white photos of that too.

There is a color illustration of the dashboard with all the instruments named.