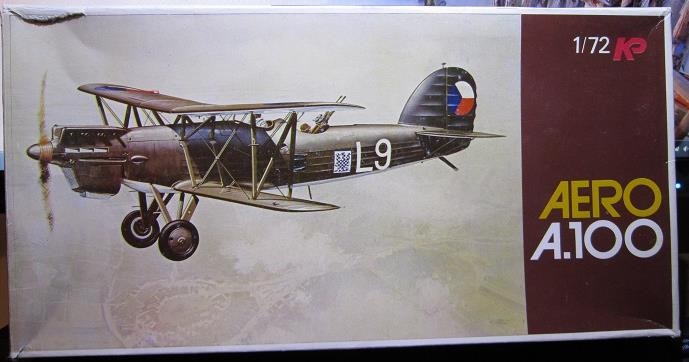 In the 1930’s, the political situation in Europe grew worse. The Czechoslovakian Ministry of National Defence was forced to modernize the Air Force. In 1932, the Ministry organized a competition for design of a modern reconnaissance and bomber aircraft, which would be a “uniform plane” and a replacement for obsolete biplanes such as the Aero A-11, Letov S-16 and the Aero Ap-32. The competition was won by Aero Factory with the prototype Aero A-100, against the Progo E-36, which was not finished in time.

At the time, the Aero A-100 was a fast biplane of clean aerodynamic shapes. The first public demonstration occurred during the air show in Prague on 10th September 1933, with test pilot Vnuk at the controls. The main problems with the A-100 prototype were vibrations of the frame, in particular the tail unit, and the wing-tips. After the installation of military equipment, also, the flight characteristics left much to be desired. The wing-tips and tail parts of the prototype were re-designed and the nose part was prolonged.

The Ministry of National Defence ordered the first series of eleven A-100’s on October 18th, 1933. They were taken over by the army during late October 1934. The second series, of thirty-three, were taken over during January through May of 1935. According to their speed, the A-100’s were used mainly for reconnaissance role and allocated to recon-squadrons, of all regiments. The long-range version of the A-100, powered by the 7/10 engine, could achieve five hours of flight-duration. The bomber version could carry 600 kg of bombs. The bombs could be fitted on four underwing racks and in a fuselage bomb bay, in combinations of 50, 200, and 300 kg weights. As reconnaissance planes, A-100’s were on squadron-duty until the mobilization in 1938. Some few A-100’s were converted for training purposes, having dual controls. They served the Military Flying School in Prostejov. The development of the A-100 continued with the A-101 and Ab-101 versions.

This kit is a combination of packaging. It is a tray that is slid into an end-opening type box. The box is very blousy and could have been at least half the size it is, width and depth wise.

The box art shows an A-100 with the fuselage number L9 on the side. In front of this is a insignia that looks like an eagle with blue and white checkerboard pattern all over him. On the back of the box is another aircraft with the squadron marking of a rampant white lion on a blue square and the call letters Z10 on the side. On a side panel is a A-100 with no squadron logo and the call letters C208 on it’s fuselage. These are the three options offered on the kit’s decal sheet.

The kit contains one cello bag that holds 2 pale gray trees of parts a small clear parts tree and the decal sheet. The instructions complete the kits contents.

The instructions consist of a single sheet that folds out into 4 pages. Page one begins with a black and white photo of an actual A-100, followed by the history of the aircraft in Czech and German.

Page 3 has “Before you start” instructions in the 3 languages, followed by the parts tree drawings.

Page 4 has four very, very busy exploded line drawings to use for assembly. These will have to be studied very carefully so things go together right. KP could have broken these drawings down into more drawings as they are almost mind-boggling the way they are.

Highly recommended to modelers that have a few aircraft under their belts because of the complexity. Also, there is some wire rigging to be done to fully accurize the kit. The head-on line drawing only shows some of doing this rigging. The box art painting will be of some help with the rest.

The kit has a copyright date of 1987 and is state of the art for back then, with raised panel lines. The detail on it is quite nice however.

I got my kit in trade with a fellow in Poland. I hate doing rigging on a biplane model, so I will probably peddle this kit off.