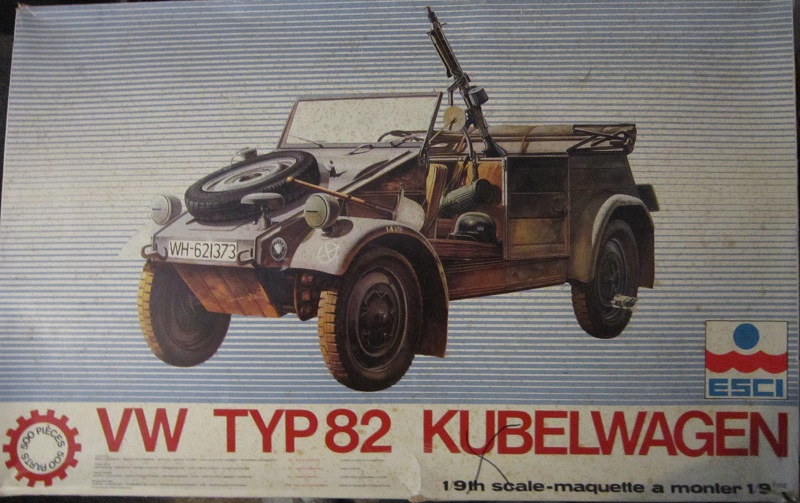 During WWII, a wide variety of all sorts and kinds of vehicles were developed and used. All of them were designed in an attempt to satisfy the various technical and tactical requirements of the belligerent nations. However, only a few of these vehicles were as popular and as widely used as the little “kubelwagen”. Which, thanks to its reliability and versatility soon became an unreplaceable part of the German Army.

The Volkswagen Type 82 Kubelwagen, derived from the economic car designed in the thirties by Engineer Porsche (actually the forerunner of today’s Volkswagen “Beetle”) was born, under the impetus of war, as a transformation of the more peaceable civilian version.

The biggest change was the bodywork, which was simplified to the maximum, to the disadvantages of its appearance, but obviously to the advantage of production requirements, took on the typical “box” shape in stamped plate.

The second basic change involved  the engine which was increased from 995 cc to 1134 cc in order to give more power, particularly necessary for off-road performance.

At the same time, the chassis and the suspensions were strengthened. Thus, by 1940 the first Kubelwagen reached the various units and made a name for themselves thanks to their excellent characteristics and performance.

Operating ceaselessly under the most difficult conditions, from the hot African deserts, to the snow-covered wastes of Russia until the end of the war.

Esci was a prolific model company based in Italy. They produced all manner of model subjects in the popular scales. In later years some of their molds went to Ertl in Dyresville , Iowa and even later some went to DML Dragon and Revell of Germany. I think that Esci went out of business.

It came shrink wrapped in a tray and lid type box.

The box art shows a Kubelwagen posed against a background that is blue and white stripes. It is in overall Panzer-grey with a license plate no,. WH-621373. It has a white tactical mark on the left front fender that is a circle with a X on it and  a pennant at the end of one of the arms of the X.

This is marking for a motorcycle unit. The markings shown in the instructions for this vehicle includes a white German helmet mark on the right front fender that is the division  mark for “Grossdeutschland” division.

There is a circle in one corner of the box art that says the kit has 500 parts in it.

One side panel has two color cut-away drawings of the Kubelwagen showing it’s side and rear. Moving parts in the kit are listed here as: steering wheel, suspensions, folding canvas roof, folding windscreen. Doors, bonnet, boot, and moveable machine gun.

There is a stapled-shut paper envelope that contains 2 steel springs, 2 steel rods and 2 rods twisted into loops. The decal sheet and the instructions complete the kit’s contents.

Page 1 of the instructions begins with a black and white grainy photograph of a real Kubelwagen. It looks to be all Panzer-grey, but no marks are visible on it. This is followed by the history of the Kubelwagen in French, English and Italian.

Page 2 through page 17 give a grand total of 25 assembly steps.

At the bottom of page 13 there is a black and white photo of a Kubelwagen parked next to an apartment building. I’m assuming this is a post war shot of a restored one.

The bottoms of pages 15 and 16 have a total of 3 walk around photos of parts of the MG-42 machine gun of which there is one with it’s pedestal mount in the kit.

Pages 18 and 19 have the parts trees illustrations. Some parts are X’d out, meaning they are excess and not needed to complete the model.

Page 20 has a 3-view line drawing with arrows pointing to where you place the decals you choose from the ones listed below the drawings. No color for the Kubelwagen are given, but I KNOW it was at least in overall Panzer-grey in the European Theatre and sand colored for North Africa. I have also seen it in some multicolor schemes. So, check your references to see what you like.

The fist marking option is for a Kubelwagen with the 15th Panzer Div., reconnaissance unit. The license no. is WH-163436. The division sign is a white triangle with a vertical bar dividing it. The tactical sign is a white rectangle on wheels with a diagonal line through it and a letter A in the upper left corner, a white pennant is on it’s roof.

The second marking option is for a Kubelwagen that is the box art subject, already described above, that is with the Grossdeutchland Div.

The third marking option is for a Kubelwagen with a Afrika Korps field postal service unit. Unit not given. It has the license no. FP-15386, the white Afrika Korps palm tree with a swastika on it and a white rectangle with a X inside it on wheels and with a small FP on the roof and a number 2 to the right of it.

The fourth marking option for a Kubelwagen is with the SS 3d Panzer Div. “Totenkopf” It has the license no. SS 51443,  a white death’s-head insignia and a unit marking of a white triangle with an X inside it on wheels and a white number 3 to the right of it.

The fifth and last marking option for a Kubelwagen is with the 2nd Fallshirmjager parachute Div. “Ramcke” Brigade. It has the license no. WL-407823 and the division mark of a white diamond outlined in black with a black R in the center.

At the bottom of the page is 2 black and white wartime photos of Kubelwagens.

On is shown from the rear it is in the markings of the second marking option Grossdeutchland Div. However, the license no. on it is different. It is WH-621377, the last digit different.

The other picture shows a German office standing next to a Kubelwagen and talking to somebody unseen inside. On the other side of it a second soldier is also talking to whoever is inside too. Behind him is a young girl sitting in a doorway. The license no on this car is WH-637471. Not one on the decal sheet. 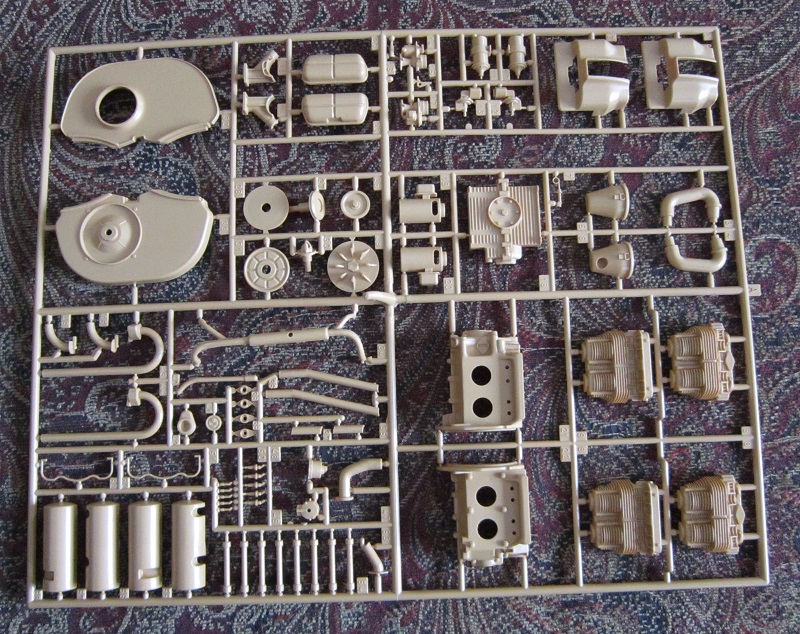 The tubing is for plumbing in the engine. 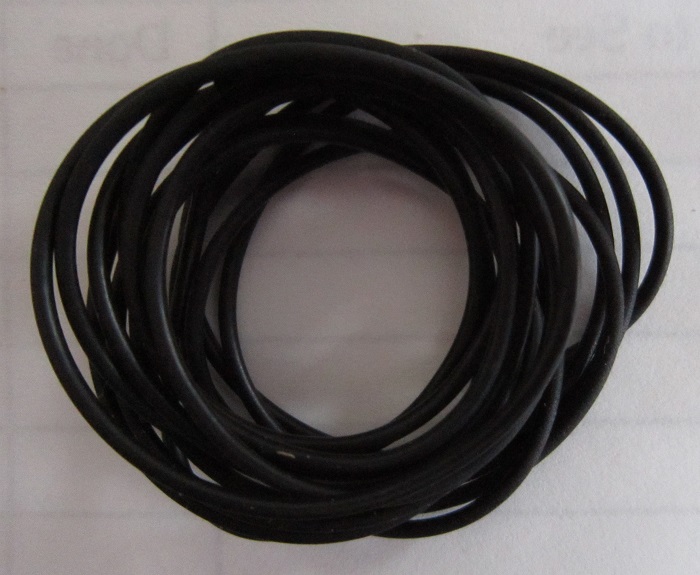 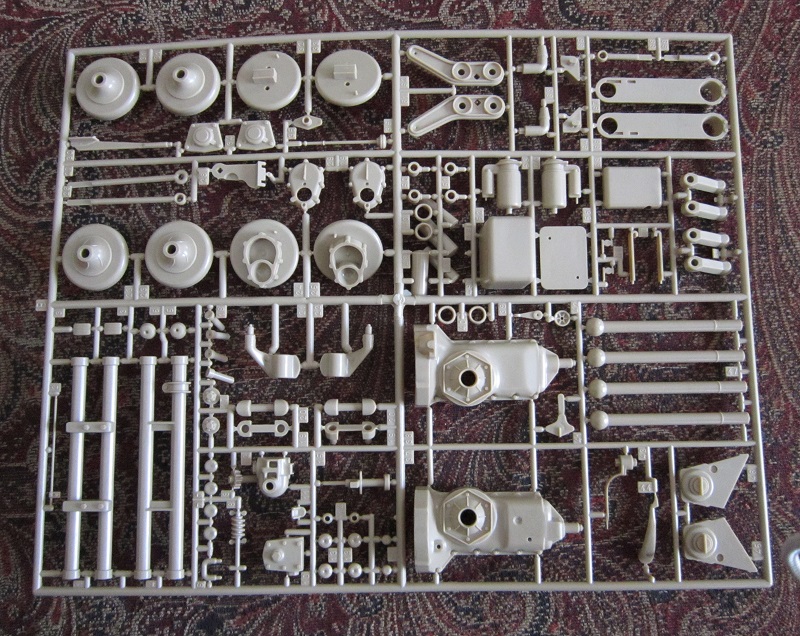 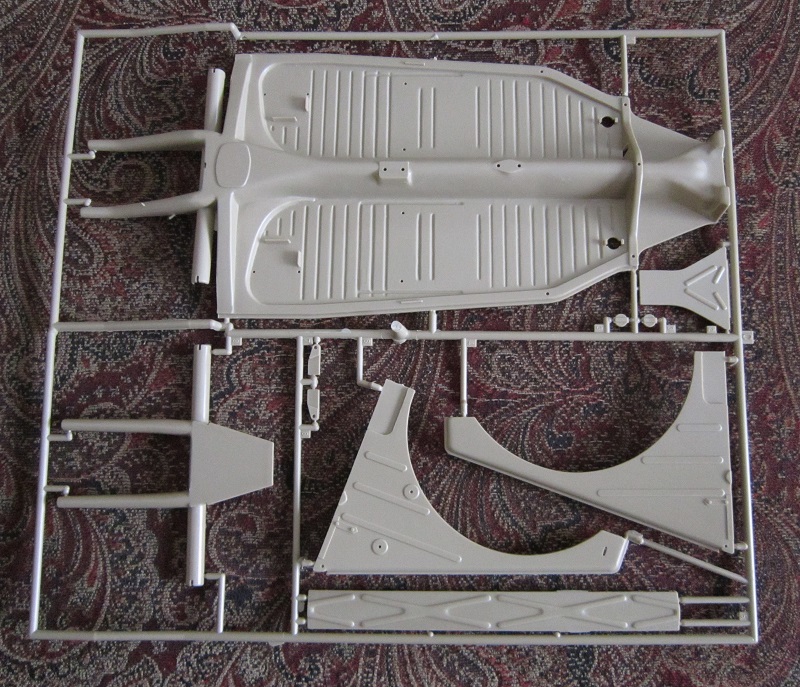 This is one of the 5 tires that mounts onto the rims. 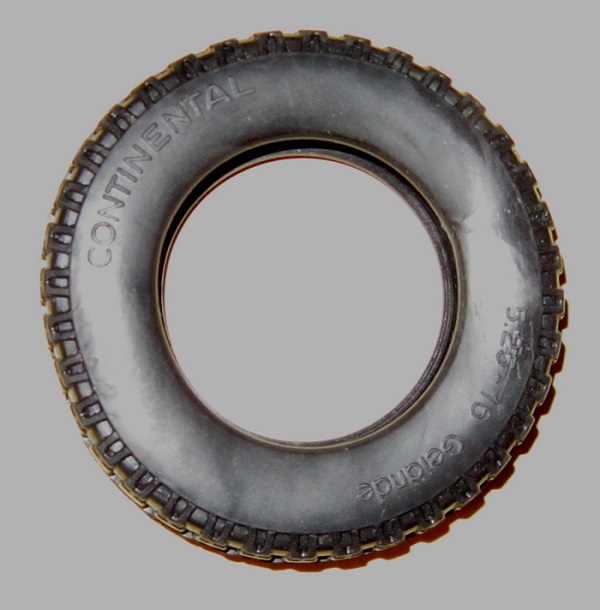 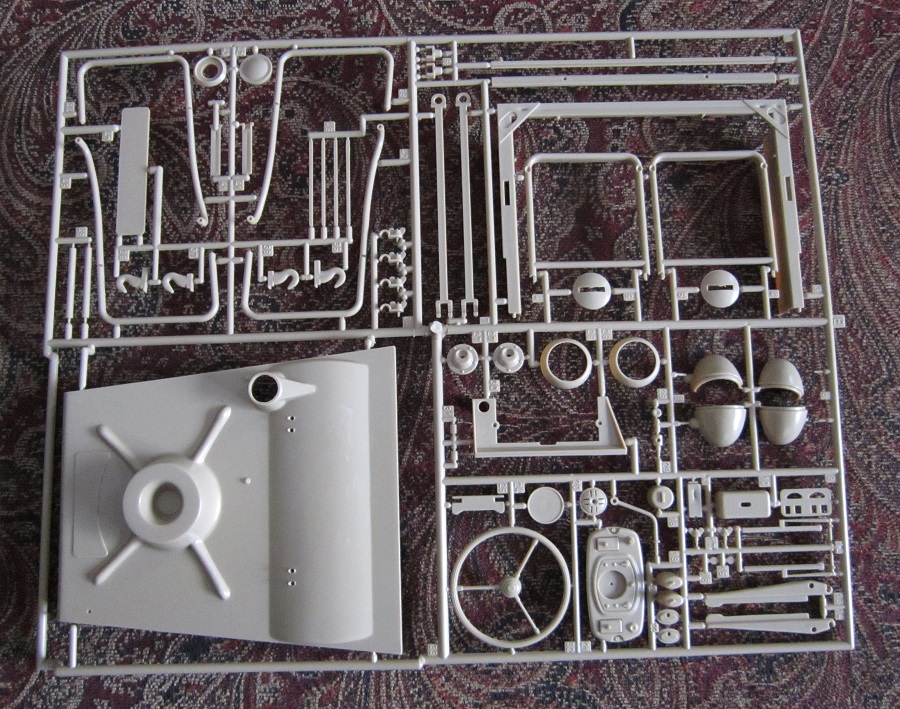 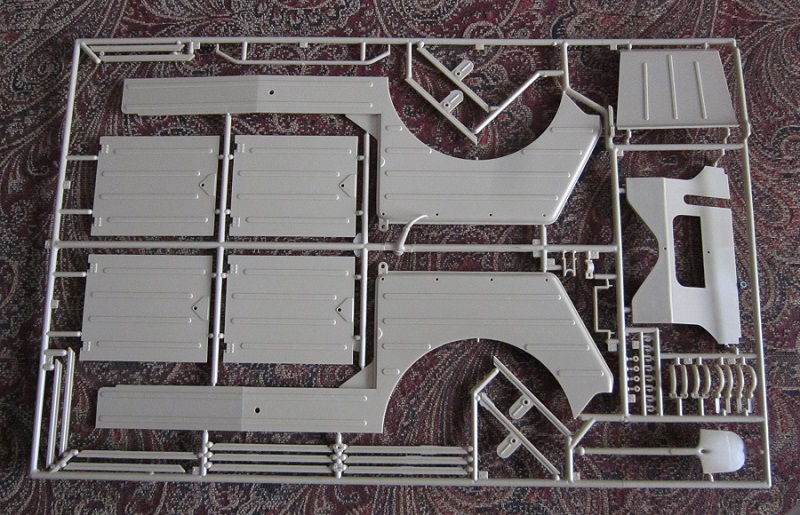 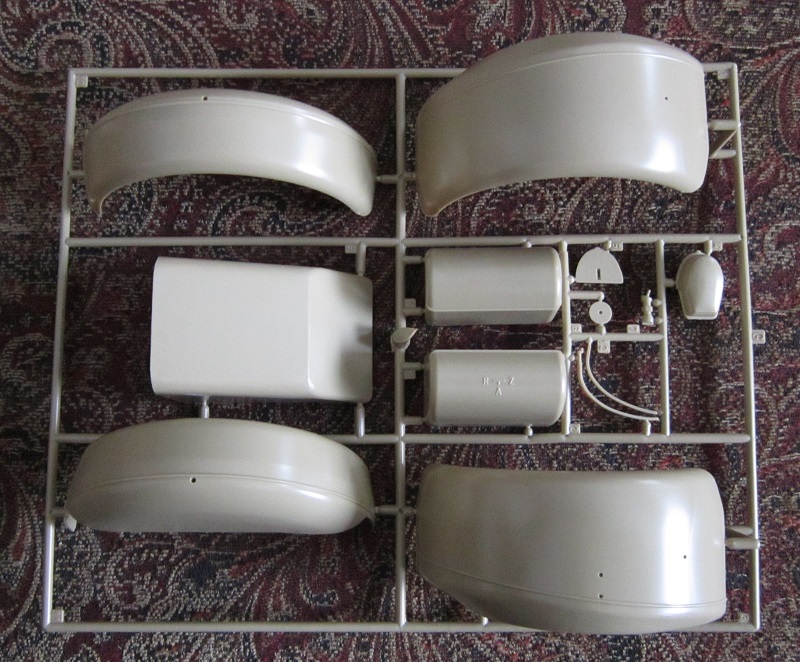 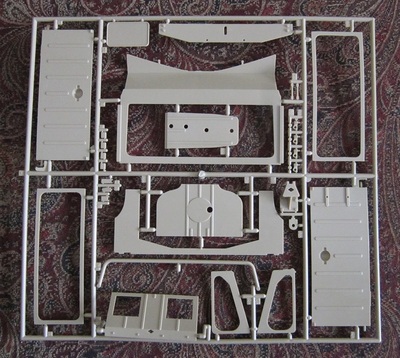 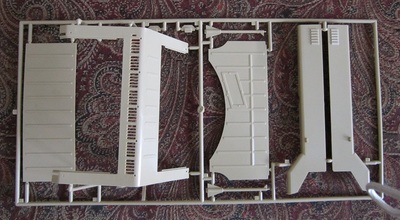 There are no letter I, J or K parts trees. 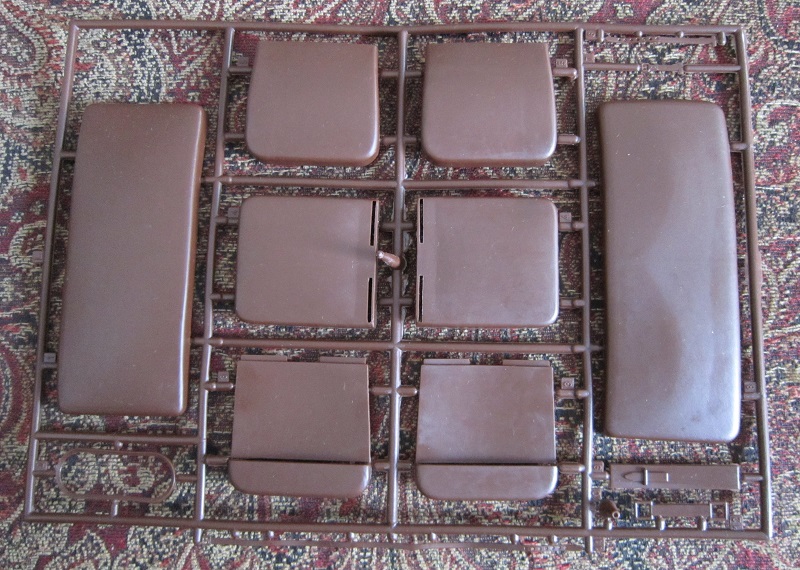 A  sheet of cloth is included for the canvas roof. There is pattern to cut it the right shapes in the instructions. 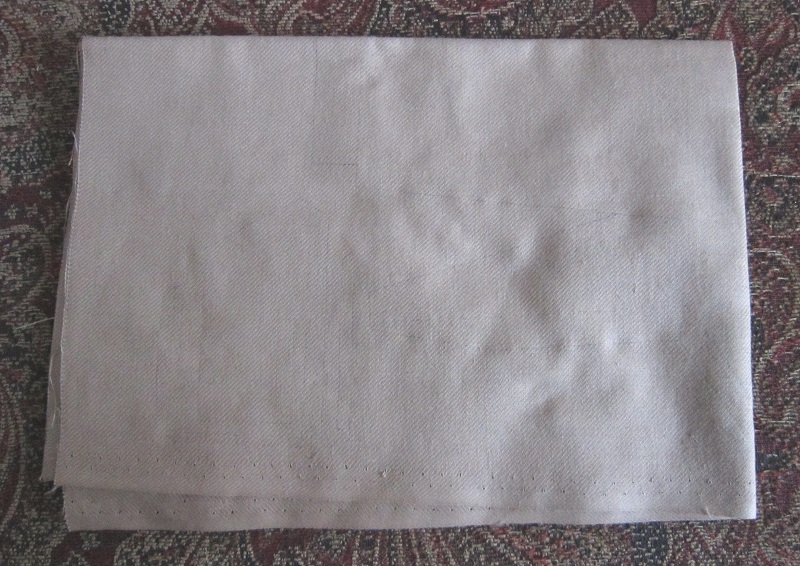 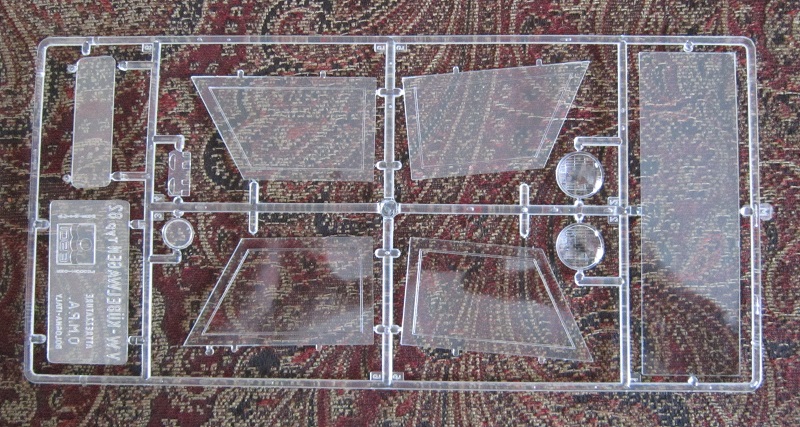 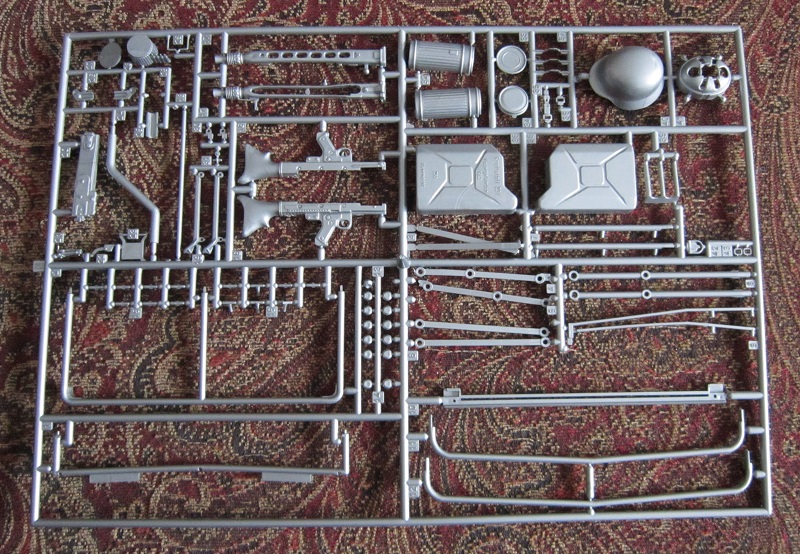 The 2 steel springs, 2 metal rods and the coiled rods are in a stapled paper envelope. 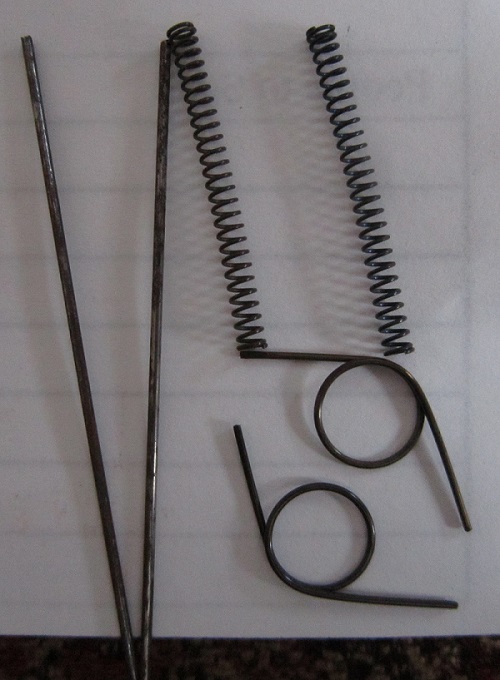 The decal sheet, already described completes the kit’s contents. It includes instrument faces for the dashboard. 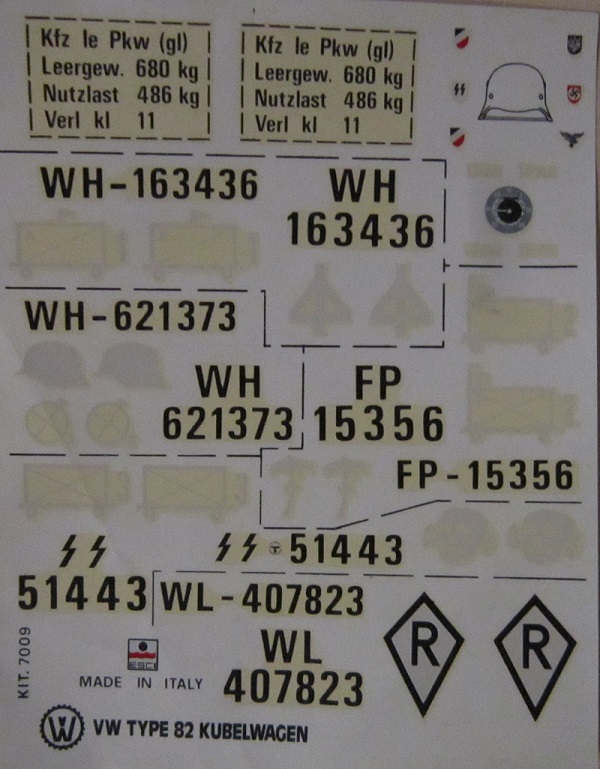 This is one neat large AFV model. It is very complex and has a lot of working features too. Detail is excellent.

I bought this kit from a vendor at a IPMS contest. I think it was back in the 70’s ?? The kit included a metal colored extra letter A parts tree. I don’t know where it came from??

Perhaps this guy has a second kit they came from. He had removed 90% of the parts on this metal colored tree and they were inside a zip locked bag in the kit. He had even glued some of the parts together that had  2 halves to them.

However, going over what is there shows that not all the parts that are loose are from the A tree and some of them are from some other model kit. Oh well, parts for the spares box.