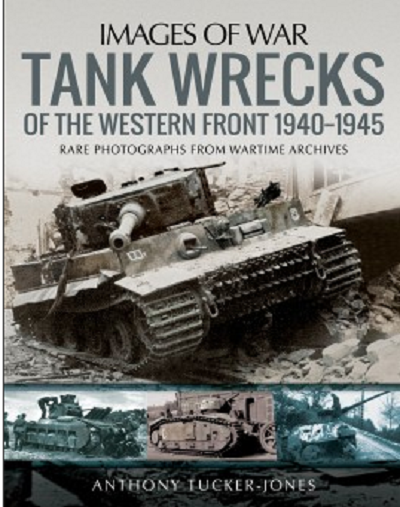 MSRP: $22.95
​Early in WWII in Western Europe, the German victors regularly photographed and posed with destroyed or abandoned Allied armor.

During their invasion of France the Germans left 4,500 smashed French tanks in their wake, and these were a popular subject for their photographs.

Then, when the time of the war was turned against them in 1944-45, their wrecked and burnt-out Panzers were photographed by the victorious Allies during the key battles for Normandy and the Ardennes.

These wartime photographers created an extraordinary record of the many thousands of tank wrecks that littered the battlefields, and Anthony Tucker-Jones has selected a fascinating visual guide to the fate of the numerous types of tank employed by the American, British, French and German armies throughout the conflict.

All the principal tanks are represented - Renaults, Matildas, Churchills, Shermans, Panzer IV's, Panthers and Tigers along with many others.

So the book gives an insight into the rapid development of tank design during the war. It also shows how vulnerable these armored vehicles were - and how lethal they could be for their crews - when they were hit by anti-tank guns and air attacks.

Pen & Sword Books is located in the UK.

It contains 158 black and white photos, counting the front and back covers.

The front cover has a photo at the top of a Tiger I belonging to SS-
Obersturmführer Michael Wittmann, who led the attack on the British 7th Armoured Division at Villers-Bocage on 13 June 1944. He commanded a company of Tiger I's belonging to the 101st Heavy SS-Panzer Battalion. During the street fighting his Tiger was disabled, but he and his crew managed to escape. The British then set it alight to stop the Germans from recovering it. Scorch marks are visible on both the hull and the turret.

On the left below this Tiger is a photo of German troops inspecting a Matilda II. At Arras, these tanks briefly ran amok before being halted by Rommel's gun line. Just under 3,000 had been built by the time production ceased in the summer of 1943. Very few though fought in the French campaign. Most ended up in North Africa and the Far East.

In the center is a French Char B1 upgraded to produce the B1 bis, which was the most common variant. It had a more powerful engine, increased armour and a longer-barrelled 47mm gun. Crew access was on the right-hand side via a hatch in the hull. In common with most tank crews, the French liked to name their tanks - this example has been dubbed "Tunis".

On the right is a Tiger II number "204", which was captured by the Americans at La Gleize during the Battle of the Bulge. The Germans left seven Tiger II's in and around the village. American engineers drove "204" as far as Ruy hoping to get it to the train station at Spa, but it broke down and refused to budge.

On the back cover there are 3 photos strung on what looks like a strip of movie film.

The first photo is of a Tiger II lost during the Ardennes offensive.

The second photo is of German soldiers examining the APX turret on an R-35 French tank. On this example, the gun appears to have been removed from the cast cradle. The girder frame attached to the rear was intended to help the tank navigate wide trenches. The chains at the front indicate that it was under tow as some point until those involved gave up.

The third photo is of a Sherman at Normandy.

On the last page of the book there is a listing of 11 other titles of AFV books by Pen & Sword.

This is a great picture book. It will be of much interest to modelers and military historians alike.

Anthony Tucker-Jones is a former defense intelligence officer and a widely published expert on regional conflicts, counter-terrorism and armstead and aerial warfare. He is the author of over thirty books, is security and terrorism correspondent for intersec - The Journal of International Security, and has freelanced for Channel 4 news.
​I want to thank Casemate Publishers, who sent me this book sample and the folks at Pen & Sword for it.

All Pen & Sword titles can be viewed on Casemate's website at:
www.casematepublishers.com
​Highly recommended.