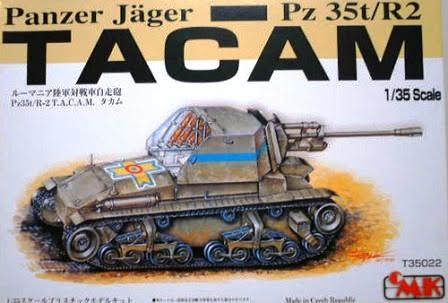 In mid 1943, a team directed by Lt. Col. Constantin Ghiulai designed, for the Romanian Army, a self-propelled anti-tank gun designated as the Skoda TACAM R-2. The prototype was produced from July to September of 1943. This prototype was ready on October 24th of that year and was tested at the testing grounds at Suditi. On February 12th of 1944, a series of 40 vehicles was ordered.

Due to technical difficulties only a small series of 20 (and one prototype) was produced at Leonida & Company factory in Bucharest. It was armed with captured Soviet ZIS-3 and F-22 UWS 76.2 mm L/42 guns based on a modified Pz.Kpw.35/R2 design.

The gun was mounted in an open (at the top and rear) lightly armored superstructure (made using armor plates from captured vehicles). This superstructure was mounted in the frontal part of the hull (in place of the normal turret), while other components and characteristics remained unchanged from the Czech 35t turreted tank.

Only 30 rounds of ammo were carried, along with a number of machine guns for local defense for the crew of three men. The vehicle weighed 11500 kg, had a range of 190 km on roads and a maximum speed of 34 m/ph. Due to the difficulties with the 76.2mm ammunition, Romanians produced their own ammo…called “Constantinescu” and their own gunsight…the I.O.R. The ammo was effective against Soviet T-34/85’s at ranges up to 600 meters. The overall design of TACAM’s was similar to that of the German’s “Marder” series, along with it’s high-profile and light protection.
​I recently had a few of my fellow modelers over to my home and we went looking through my stash of armor kits. These fellows were very interested in the more OBSCURE subjects there, so I decided to review a few here on Indy AMPS.

CMK in the Czech Republic normally sells their armor kits under their own logo. However, this has got to be the only time I found it sold under the Baumann name, which is based in Tokyo, Japan. Even some of the box lid is printed in Japanese.

The box art shows a TACAM in the markings of the 63rd TACAM Company, Romanian Army, fighting for the liberation of Bucharest, Ploesti and Northern Transylvania in 1944 (one of the marking options on the kit’s decal sheet).

A side panel shows the box arts of 3 different German WWII version VW Beetle cars that CMK makes kits of: a sun-roofed and balloon tired Afrika Korps version, a solid roofed European version and a pick-up truck. I have all three of these in my stash also. These have been reviewed on this site too.

​The kit contains 4 light grey parts trees, 2 that are bone white, a fret of brass PE parts, the instruction booklet and decal sheet.

The instructions consist of 3 sheets that are folded in the middle and then inserted into each other to form a small 12 page booklet.

Page 1 begins with a black and white side-profile drawing of the TACAM. This is followed by the history of the vehicle in Czech, English, German and French.

Page 2 begins with parts tree drawings. Some of the parts are shaded out, on these drawings, meaning they are excess or not needed to complete the kit.

Tree letter C is common to this kit and the straight turreted Czech 35t that CMK also markets, so the turret parts are all shaded as excess.

The largest turret part seems to have been removed already at CMK’s factory, before it ever got boxed. Guess they needed that plastic to remelt?

These drawings are followed by international assembly symbol explanations and a list of either Humbrol or Tamiya paint colors needed to decorate the vehicle.

Pages 3 through the top of page 10 give a total of 31 assembly steps. I thought this was a LOT for a tank kit this size.

Page 12 gives a top and side view of a TACAM of the Romanian 63rd TACAM Company (previously also mentioned above).

A third scheme is a side profile drawing of a TACAM of the Romanian 2nd Armored Regiment in 1945.

The rest of the parts trees are molded in light gray styrene. 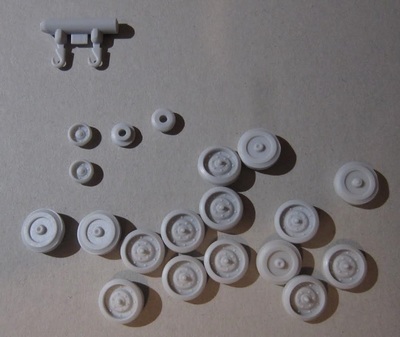 Letter B tree holds the upper, lower and side hull parts, a tow cable, the main gun for a 35t (excess), mufflers and machine guns etc. (22 parts). One part is excess.
​Letter C tree holds the fenders, tools, front hull plate and 25t turret parts (which, as already mentioned are excess to this kit). (23 parts) 11 are excess. 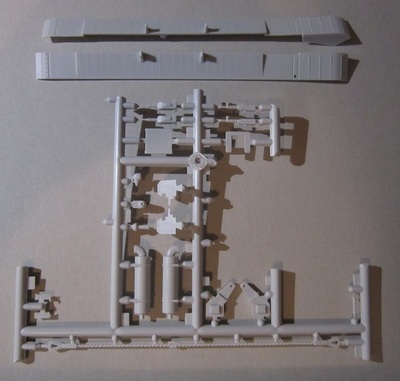 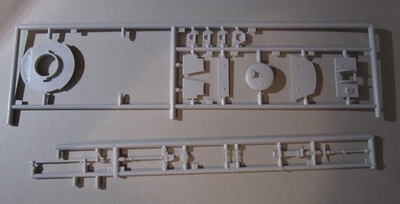 Ten of the ammunition holders have rounds molded into them and 26 are empty.
I intend to add some more rounds, to the empty holders, from some of my company’s (Armor Research) white metal Soviet 76mm rounds (which are the same size and shape as what is molded in the kit). 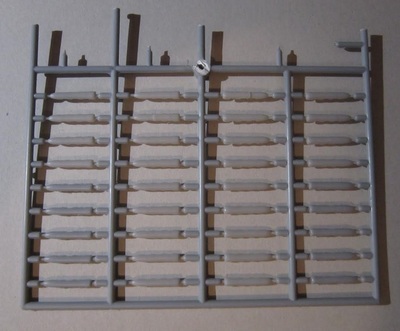 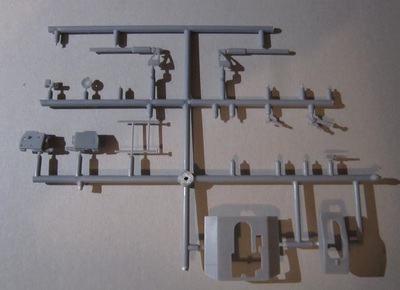 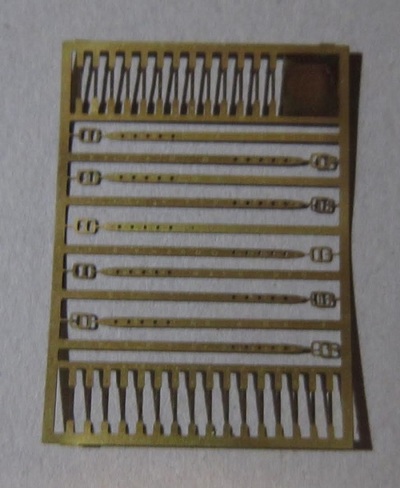 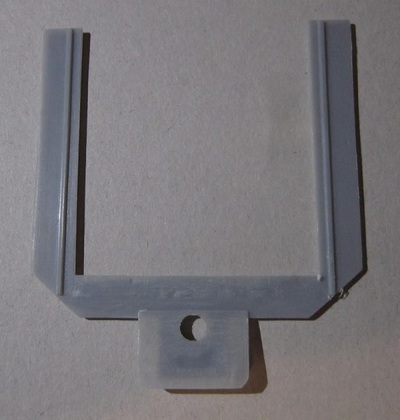 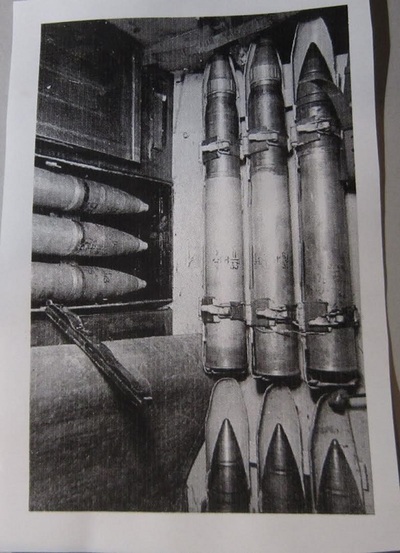 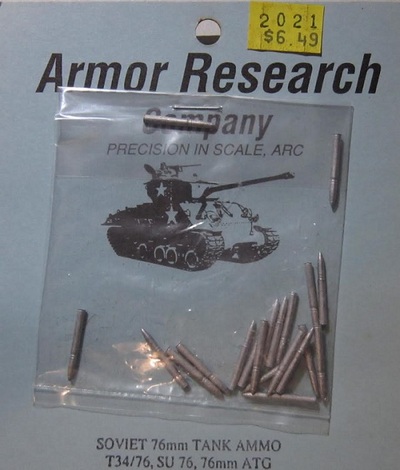 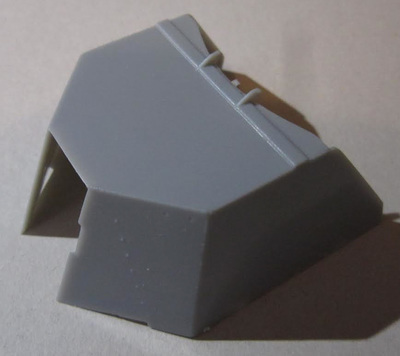 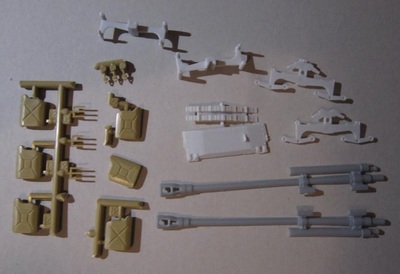 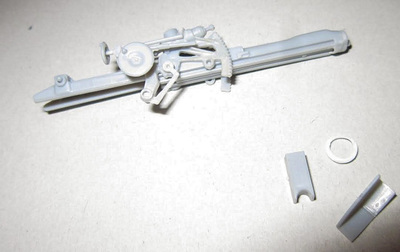 ​Letter F is the brass PE fret. It holds a couple gun shield parts, grab handles (which are two-dimensional/flat and need to be replaced with some round wire) etc. (13 parts). Also in the photo is the decal sheet. 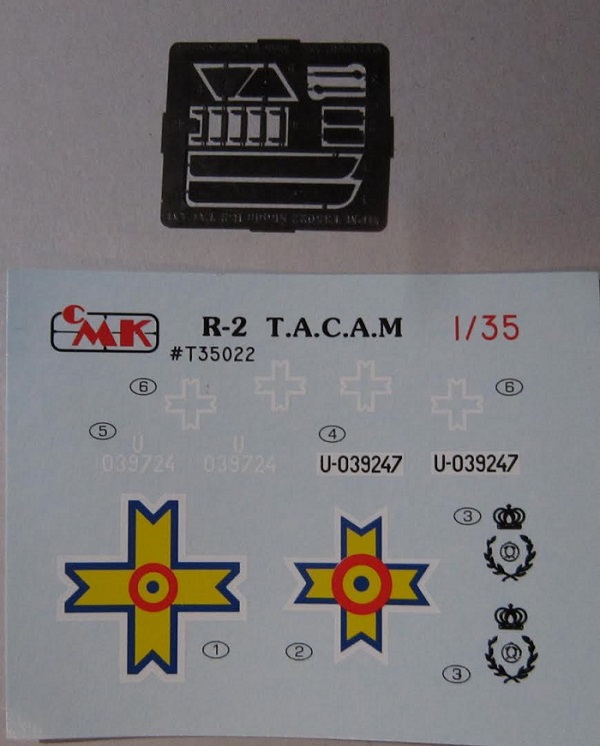 ​The little instruction booklet and the decal sheet complete the kit’s contents.

I am going to add a set of VLS Verlinden radios and a MV brand headlight lens and one of my company's (Armor Reseach Co.) tie down straps set to this model. 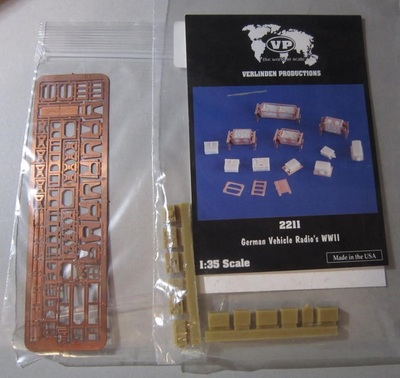 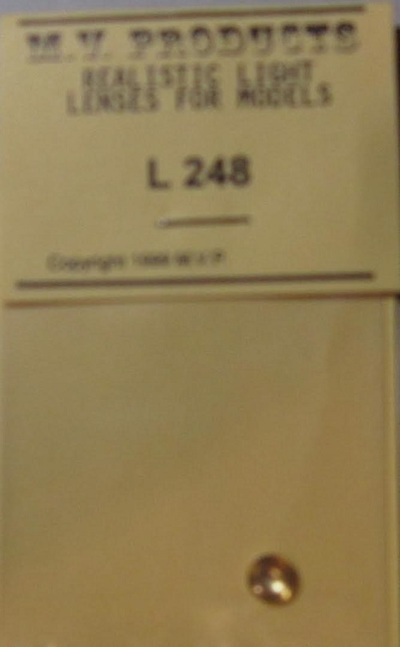