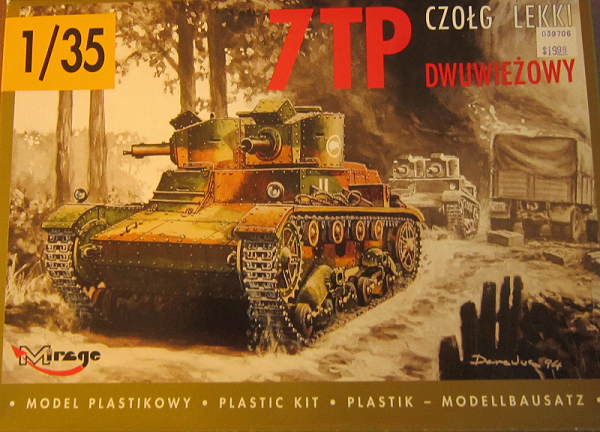 The 7TP (siedmiotonowy polski - 7-tonne Polish) was a Polish light tank of the Second World War. It was developed from the British Vickers 6-ton. A standard tank of the Polish Army during the 1939 Invasion of Poland, its production never exceeded 150 vehicles. Its chassis was used as the base for C7P artillery tractor.

The 7TP was the Polish development of the British Vickers 6-ton Mark E tank licence. Comparing to Vickers, the main new features of 7TP were: a better, more reliable and powerful diesel engine, a 37 mm anti-tank gun, thicker armor (17 mm instead of 13 mm on the front), modified ventilation, the Gundlach tank periscope, and a radio.

About 132 tanks were produced between 1935 and the outbreak of the war, plus four iron prototypes. The designation 7TP meant "7 Tonne, Polish" (in fact its weight increased to 9 tonnes after the initial prototype).

Although 7TP is often claimed to be the world's first (production) diesel-powered tank, this distinction actually goes to Japanese Type 89B I-Go Otsu, produced with a diesel engine from 1934 onward.

Barring that, the claim of a first purpose-designed diesel-powered tank is tied with Type 95 Ha-Go, whose series production also commenced in 1935.
Like its British predecessor, the 7TP was initially produced in two variants: twin turret version armed with 2 Ckm wz.30 machine guns, and a single turret version, armed with 37 mm Bofors wz. 37 gun.

After initial tests, it became clear that the twin-turret variant was obsolete and lacked firepower, so it was abandoned in favor of the more modern single turret design.

Prior to the outbreak of World War II most of the twin turret tanks were converted to single turret versions and only 24 twin-turret types remained in Polish service (as opposed to roughly 108 of the other type).

It is to be noted that twin and single turret variants had no specific designations. In some modern books they are unofficially designated "7TP dw." and "7TP jw." (Polish abbreviations for dwuwieżowy – dual turreted; jednowieżowy – single turreted).

In 1938 Państwowe Zakłady Inżynierii also produced 13 prototype models of a better armored version of the 7TP – the 9TP.

Although the 9TP never entered production, these prototypes were used in the defense of Warsaw in September 1939.

Mirage is based in Warsaw, Poland.

This kit came in a taped-shut end-opening type box. I am no fan of this type of box, because invariably parts or the decal sheet find their way past one of the end flaps to become lost forever. Give me a tray and lid type box any day of the week.'

The box art shows two 7TP's moving down a snow-covered road through a forest past a burning truck.

The bottom of the box has 2 color profiles of 7TP's. Both are in the box art scheme.

The first one has the scheme with sharp edges to the 3 colors. No marks are shown. It is as it appeared in 1935. No unit is mentioned.

The second one is the box art scheme (already described above). It is as the tank looked in 1939. Again no unit mentioned. 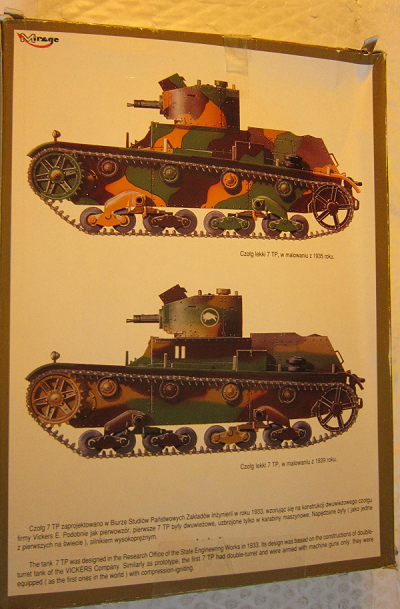 ​Below them is a one-paragraph history of the 7TP in Polish and English.
WHAT'S IN THE BOX:

The kit contains 2 dark-green trees and 2 medium-gray trees and black vinyl treads and the decal sheet in a sealed clear cello bag and the instructions.

Page 1 begins with a black and white repeat of the box art, over the parts trees illustrations.
Page 2 through 4 give a total of 7 assembly steps.

Page 6 repeats the schemes from the box bottom, over a suggested listing of paint colors by either Revell, Humbrol or Tamiya brands.

Medium-gray letter A tree holds: hull top sections, lockers, hatches etc. (17 parts) 5 parts are shaded-out in the parts trees illustrations as being excess and not needed to complete the model. 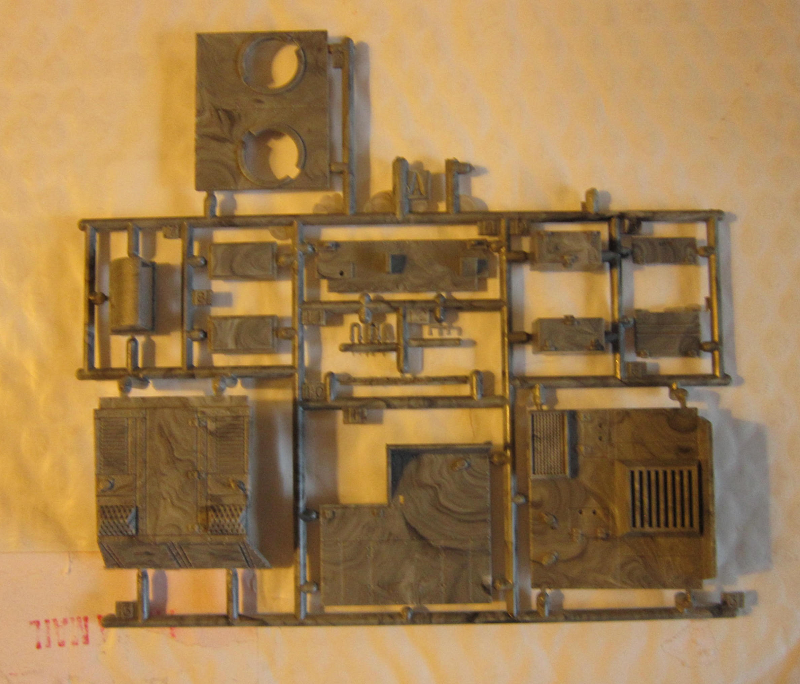 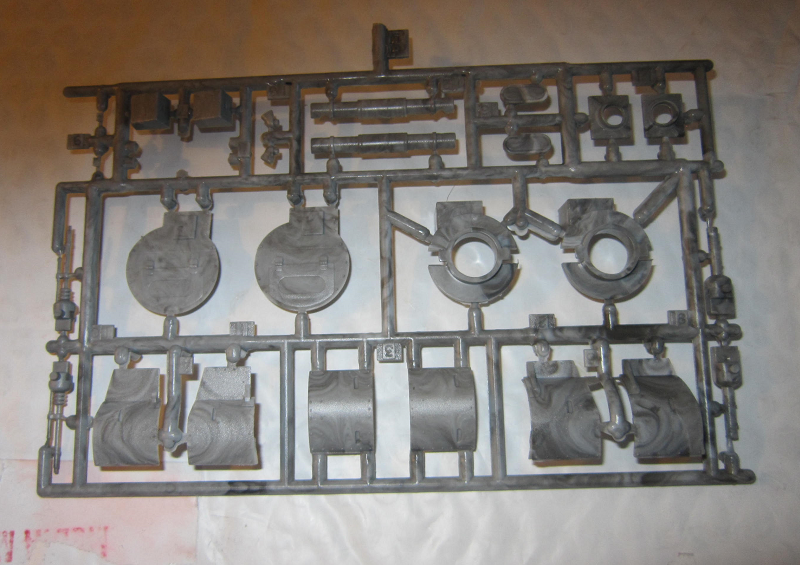 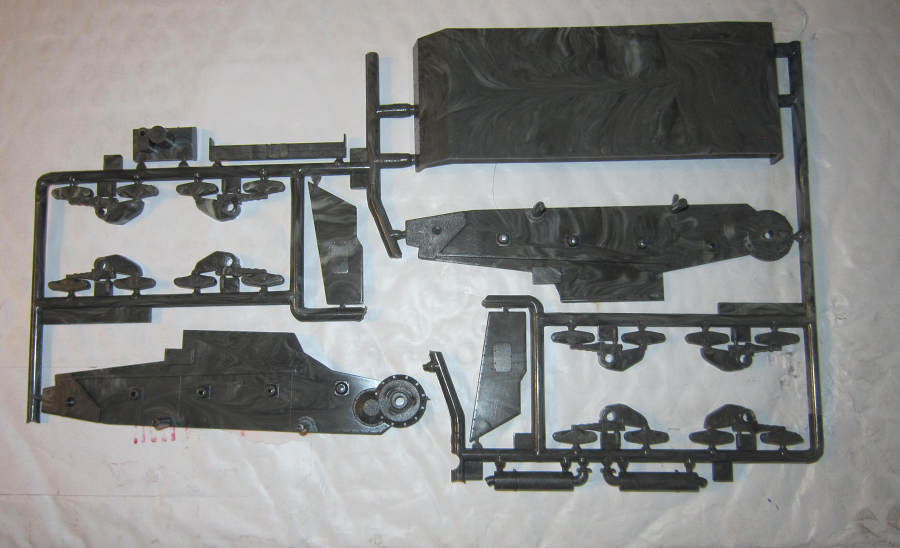 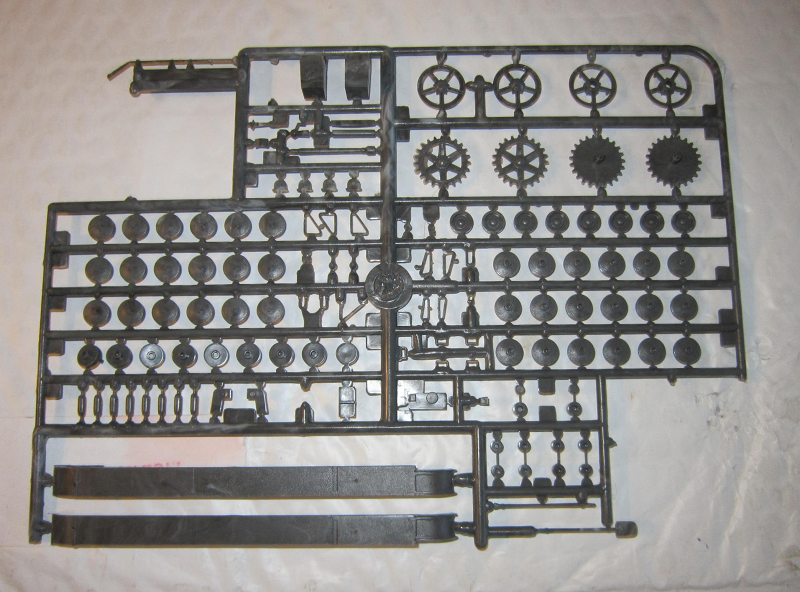 ​Next is the 2 runs of black vinyl treads.

There are no crew figures included or any interior detail, but it has nice exterior detail.

The decal sheet completes the kits contents. I was unable to get the white markings on it to show up against the white sheet they are printed on. There is the white circle with a buffalo on it and a white leaping leopard.