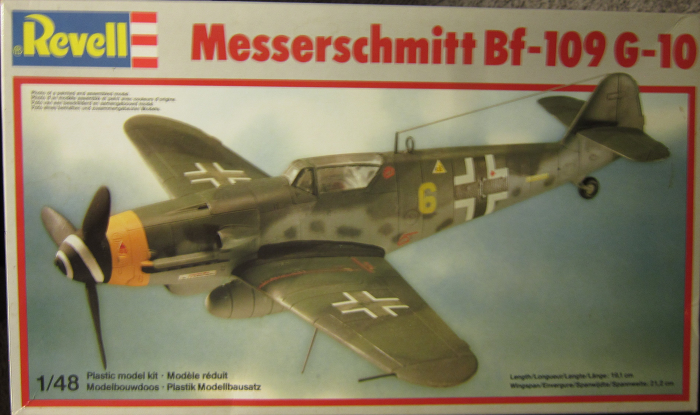 The Bf-109 G-series was developed from the largely identical F-series airframe, although there were detail differences. Modifications included a reinforced wing structure, an internal bullet-proof windscreen, the use of heavier, welded framing for the cockpit transparencies, and additional light-alloy armour for the fuel tank.

It was originally intended that the wheel wells would incorporate small doors to cover the outer portion of the wheels when retracted. To incorporate these the outer wheel bays were squared off.

Two small inlet scoops for additional cooling of the spark plugs were added on both sides of the forward engine cowlings. A less obvious difference was the omission of the boundary layer bypass outlets, which had been a feature of the F-series, on the upper radiator flaps.

Like most German aircraft produced in World War II, the Bf-109 G-series was designed to adapt to different operational tasks with greater versatility; larger modifications to fulfil a specific mission task, such as long-range reconnaissance or long-range fighter-bomber, were with "Rüststand" and given a "/R" suffix, smaller modifications on the production line or during overhaul, such as equipment changes, were made with kits of pre-packaged parts known as Umrüst-Bausätze, usually contracted to Umbau and given a "/U" suffix.

Field kits known as Rüstsätze were also available but those did not change the aircraft designation. Special high-altitude interceptors with GM-1 nitrous oxide injection high-altitude boost and pressurized cockpits were also produced.

The newly fitted Daimler-Benz DB 605A engine was a development of the DB 601E engine utilised by the preceding Bf 109 F-4; displacement and compression ratio were increased as well as other detail improvements to ease large-scale mass production.

The full output was not reinstated until 8 June 1943 when Daimler-Benz issued a technical directive. Up to 1944, the G-series was powered by the 1,475 PS Daimler-Benz DB 605 driving a three-blade VDM 9-12087A variable-pitch propeller with a diameter of 3 m (9.8 ft) with even broader blades than used on the F-series.

Pitch control, as on the 109F, was either electro-mechanical (automatic) or manual-electric using a thumb-switch on the throttle lever.From 1944 a new high-altitude propeller with broader blades was introduced, designated VDM 9-12159, and was fitted to high-altitude variants with the DB 605AS or D-series engines.

The early versions of the Bf 109G closely resembled the Bf 109 F-4 and carried the same basic armament; however, as the basic airframe was modified to keep pace with different operational requirements, the basically clean design began to change.

Erich Hartmann, the World's top scoring fighter ace, claiming 352 victories, flew only the Bf 109G, of which he said:

It was very manoeuvrable, and it was easy to handle. It speeded up very fast, if you dived a little. And in the acrobatics manoeuver, you could spin with the 109, and go very easy out of the spin.

The only problems occurred during takeoff. It had a strong engine, and a small, narrow-tread undercarriage. If you took off too fast it would turn [roll] ninety degrees away. We lost a lot of pilots in takeoffs.[62]

From the Bf-109 G-5 on an enlarged wooden tail unit (identifiable by a taller vertical stabilizer and rudder with a morticed balance tab, rather than the angled shape) was often fitted.

This tail unit was standardised on G-10s and K-4s. Although the enlarged tail unit improved handling, especially on the ground, it weighed more than the standard metal tail unit and required that a counterweight was fitted in the nose, increasing the variant's overall weight.

With the Bf-109G, a number of special versions were introduced to cope with special mission profiles. Here, long-range fighter-reconnaissance and high-altitude interceptors can be mentioned.

The former were capable of carrying two 300 L (80 US gal) drop tanks, one under each wing; and the latter received pressurized cockpits for pilot comfort and GM-1 nitrous oxide "boost" for high altitudes. The latter system, when engaged, was capable of increasing engine output by 223 kW (300 hp) above the rated altitude to increase high-altitude performance.
​THE KIT:

Revell is an old prolific model company that manufactures all manner of model subjects in the popular scales. In recent years they have become associated with Monogram.

This kit came in a shrink-wrapped tray and lid type box. The parts in the box fit the box tight in all 4 directions.

The box art shows a color photo of the model made up and posed against clouds. It is in a black-green a dark-green mottle above a light-blue undercarriage. It has a black and white spiral on the spinner, a yellow nose and a yellow fuselage code of 6 + yellow horizontal bar. A photo of it is shown again as a small color profile on the corner of the box art.
​One side panel lists features of the kit: Wingspan 8 1/8", length 7 3/8", clear canopy, authentic decal markings, armor glass, gunsight. This model was patterned from an original Bf-109 at Planes of Fame Museum in Chino, CA, followed by a color photo of the belly tank and rotatable propeller and a suggested listing of colors to use.
​The other side panel has a one-paragraph history of the Bf-109, features of the kit again in English, German, French, Dutch, Italian and Swedish.
​WHAT'S IN THE BOX:

Parts trees are not cello bagged, alphabetized or illustrated in the instructions. They do however have part number tabs next to the parts on them.

The instructions consist of a single sheet printed on both sides in 8 1/2" x 11" format, folded to fit the box.

The face side has a 4-view of the box art scheme (already described above), over 2 international assembly symbol explanations.

The reverse side has 15 assembly steps on it. 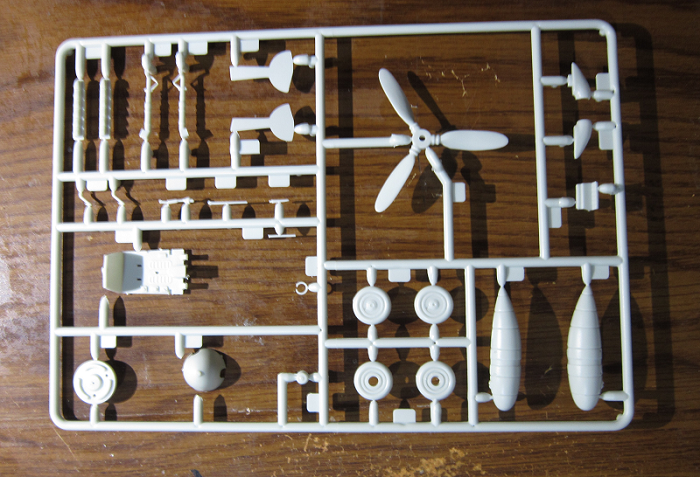 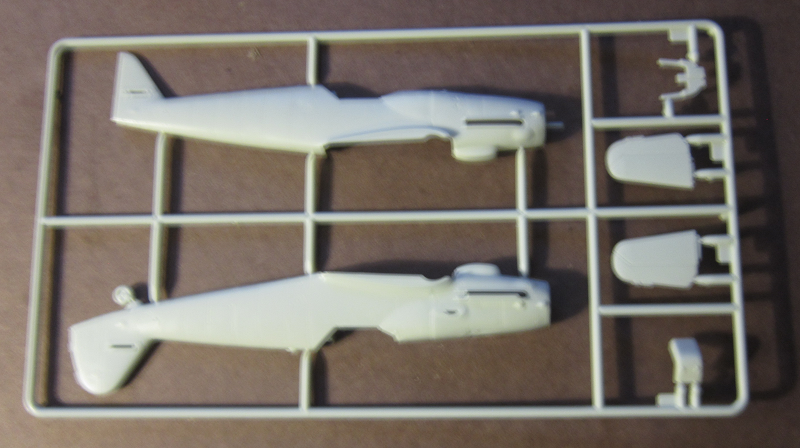 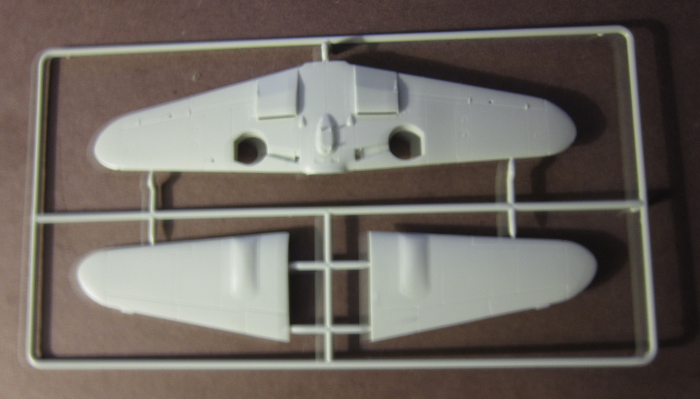 ​The decal sheet completes the kit's contents. It includes some stencil markings. 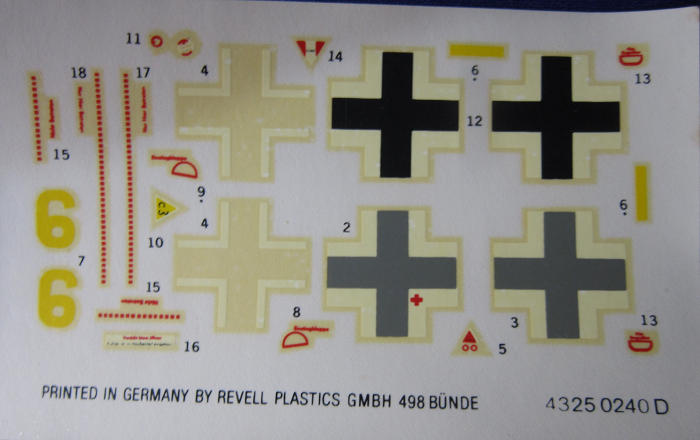