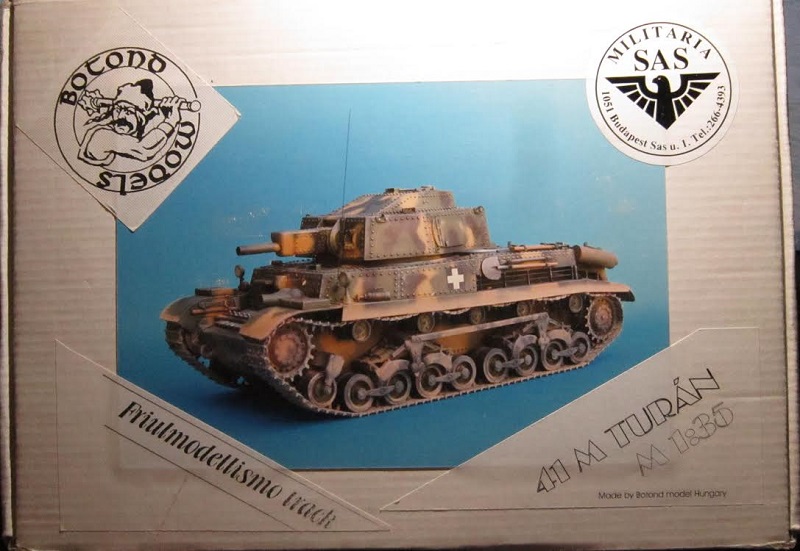 The 40M Turan I was a Hungarian tank of WWII. A total of 424 were made in two variants. The Turan I had a 40 mm gun and the Turan II had a 75 mm gun. It was based on the design of the Czechoslovak Skoda T-21 medium tank prototype.

After the disastrous Stalingrad offensive, the army realized that they needed a more powerful weapon to counter the more effective Soviet tanks, especially the T-34. A variant was ordered which utilized a short 75 mm gun in an enlarged turret. Known as the 41M Turan II (subject of this kit). This vehicle otherwise remained virtually unchanged from the original vehicle. Despite the improvement, the relatively low velocity of the projectile was unable to pierce the frontal armor of a T-34, except at point blank range. The T-34’s main gun would penetrate the Turan’s 50 mm armor at a much greater distance. Hungarian manufacturers built a total of 139 vehicles in 1943 and 1944 before the German occupation of Hungary.

Aside from tank production, the chassis was the basis for an assault gun, called the Zrinyi II (subject of another kit from Botond). This weapon mounted a 105 mm short gun which poked through the frontal plate of the hull, and lacked the all around traverse turret of the battle tanks. Only 60 examples of this useful weapon were produced. The only other vehicles known based on this chassis were the Turan III and the Zrinyi I, both of which used the German 75 mm L43 tank gun (which armed the German Panzer IV medium tank). Both vehicles were produced as prototypes only, as the Hungarian Army was being supplied with German armored vehicles at that time.

The Turan’s were inducted into the 1st and the 2nd Hungarian Armored Divisions, as well as the 1st Cavalry Division in 1943 and 1944. Both types would have perhaps performed well in 1940, but by this stage of the war were hopelessly outclassed by most Allied armor. The vehicle’s combat debut wasn’t until April 1944 in Galicia with the 2nd Armored Division, during which time that division lost a quarter of their tanks and failed to achieve their objectives, mostly due to the inadequacies of the Turans.

Botond was a manufacturer of resin AFV kits, most of them Hungarian WWII subjects. It is my understanding that they went out of business. They were based in Budapest, Hungary. I traded a fellow over there, years ago, some of my company’s (Armor Research Co.) after market armor accessories for 3 different Botond kits of WWII Hungarian armor.

This kit comes in a sturdy, generic white box. The box is a tray with a hinged lid that has tuck-in tabs that lock the top into the bottom tray.

The box art is a color photograph of the Turan made up. This photo is then glued to the lid. The 41M Turan is in a base of light tan with waves of red-brown and dark green over it. The Hungarian national cross is on the sides of the hull.

On the side panel of the box are 4 more color photos of the model built up, glued to it, that show the finished model from various angles: the front, top, rear and side. It shows a large Hungarian cross on top of the engine deck and a yellow number 10 on the turret sides. Unfortunately, the kit does not include any decals.

Taped inside the hinged lid is a fret of brass PE. This fret holds: fenders and their braces, tow hooks, mud scrapers and a louvered air intake (42 parts). 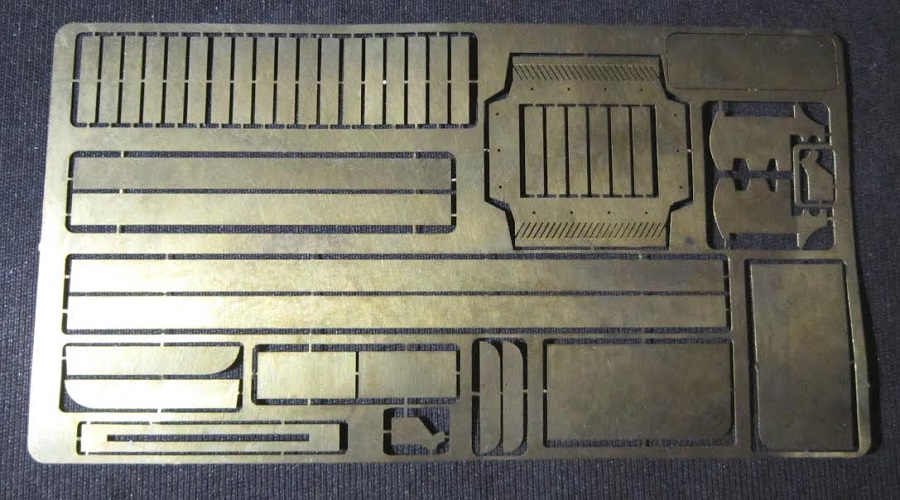 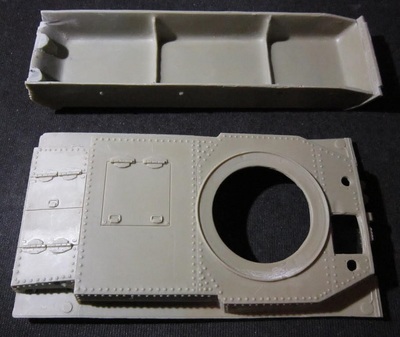 Three smaller zip-locked cello bags hold all the rest of the resin parts. These are so many, that I will not even try to name what those are. Readers can look for themselves.

Almost all of these small parts are going to need attention with the needle files to remove excess flash on them. I also had some of the road wheels that had air bubbles that formed in the tires of them, so putty will be needed on those.

The resin is light tan in color. 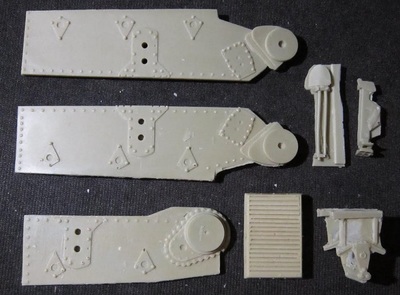 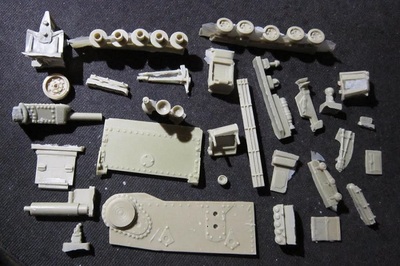 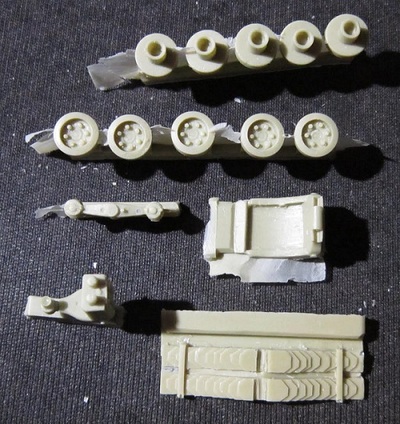 A final small zip-locked cello bag holds the Fuilmodellismo individual white metal track links and 4 drive sprockets. This vehicle is odd, because it has drive sprockets at both the front and the rear. Normally, on most tanks, you would see  idler wheels in one of those positions. 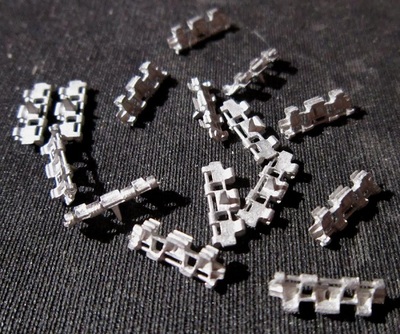 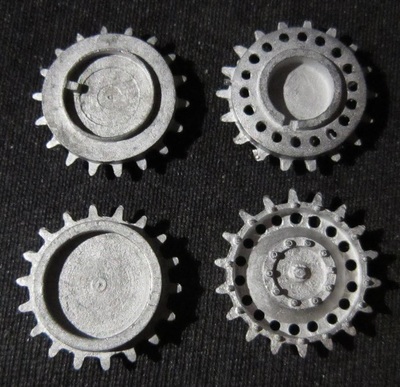 The body of this vehicle is heavily riveted. Some of the rivet heads are missing on my kit. Apparently, they were pulled off when the part was removed from the mold. I purchased a bunch of Grant Line brand round headed rivets in .032” to replace the missing ones. 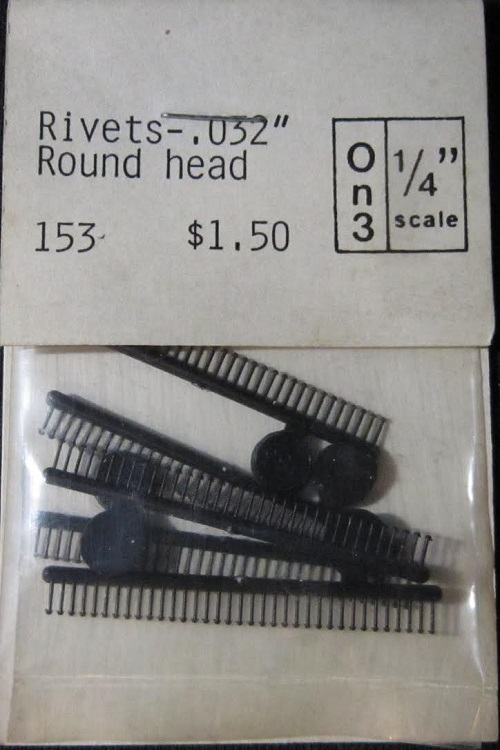 The instruction sheet is the WEAKEST thing in the kit. It is a single sheet, printed on one side, that has 4 exploded drawings to go by. However, these drawings do not clearly show how everything goes together. This means that you have to study the photos on the outside of the box and perhaps some other illustrations in books or elsewhere. Some of it is going to be BY GUESS & BY GOLLY otherwise.

Because there are no decals provided in the kit, nor any color information other than what’s shown in the box photos you will have to refer to it for color and marking guide.

I recommend this kit only to those modelers that have had experience with multi-media type kits, of resin, white metal, and PE parts and also experience assembling kits with super glue.

This is a limited run kit now long out of production.