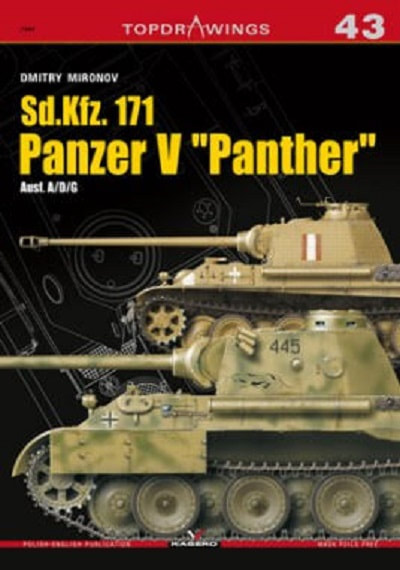 The Panther was a German medium tank deployed during World War II on the Eastern and Western Fronts in Europe from mid-1943 to its end in 1945. It had the ordnance inventory designation of Sd.Kfz. 171. Until 27 February 1944, it was designated as the Panzerkampfwagen V Panther when Hitler ordered that the Roman numeral "V" be deleted. Contemporary English language reports sometimes refer to it as the Mark V.

The Panther was a compromise. While having essentially the same engine as the Tiger I, it had more efficient frontal hull armour, better gun penetration, was lighter and faster, and could traverse rough terrain better than the Tiger I. The trade-off was weaker side armour, which made it vulnerable to flanking fire. The Panther proved to be effective in open country and long range engagements, but did not provide enough high explosive firepower against infantry.

The Panther was far cheaper to produce than the Tiger I, and only slightly more expensive than the Panzer IV. Key elements of the Panther design, such as its armour, transmission, and final drive, were simplifications made to improve production rates and address raw material shortages. The overall design remained somewhat over-engineered.

The Panther was rushed into combat at the Battle of Kursk despite numerous unresolved technical problems, leading to high losses due to mechanical failure. Most design flaws were rectified in the German retreat, though the bombing of production plants, increasing shortages of high quality alloys for critical components, shortage of fuel and training space, and the declining quality of crews all impacted the tanks's effectiveness.

Kagaro is a publisher based in Lublin, Poland.

The cover art shows 2 Panthers posed against a black background that has a white line drawing of the top of the engine deck of a panther.

The Panther in the foreground is in a base of sand with pale green  spots. It has a black outlined Panther figure on the sides of the turret below a black no. 445 and a small German cross on the forward end of the sides of the hull.

One corner of the cover art says the book contains mask foils free. These are self-adhesing masks for painting the German crosses on a Panther model. Neat !

The book contains line drawings of the Panther variants.

Next is two more above views of the Ausf. A in no particular scale, but large.

Captions under these is in Polish and English as is the text in the book.

The back cover of the book has an additional color profiles of the Ausf. G.

This is followed by line drawings of the Ausf. D version as a 5-view in 1/48th scale, 1/72nd scale and a couple above shots in no particular scale.

There are 3 loose line drawing plans inserted into this book.

This is one neat set of line drawings and profiles.

Highly recommended. It will be of great interest to AFV modelers and armor inthusiasts alike.

I want to thank the folks at Casemate, who are the North American distributors of Kagero Publications for this review sample and Kagero also.

A full listing of all Kagero titles can be viewed at:
www.casematepublishing.com