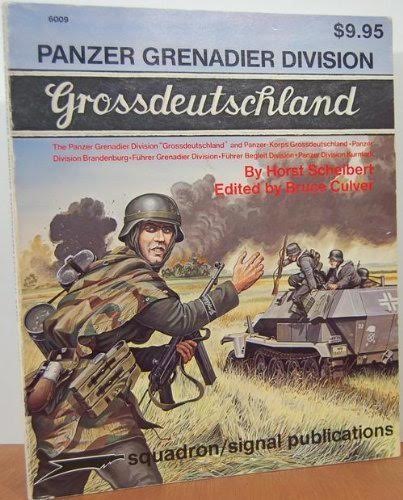 Squadron/Signal Publications is an older on web hobby shop that sells model kits, hobby supplies and books. They are located in Texas.
​HISTORY:

The unit originally started out as a ceremonial guard unit in the 1920s and by the late 1930s had grown into a regiment of the Wehrmacht. The regiment would later be expanded and renamed Infantry Division Großdeutschland in 1942, and after significant reorganization was renamed Panzergrenadier Division Großdeutschland in May 1943. In November 1944, while the division retained its status as a panzergrenadier division, some of its subordinate units were expanded to divisional status, and the whole group of divisions were reorganized as Panzerkorps
Großdeutschland.

The cover art shows "Grossdeutschland" Panzer Grenadiers dismounting from a Sd.Kfz. 251 halftrack in front of a resistance point, during the drive on Rzhev, late Fall 1942.

The squad leader in the forground wears an autumn camouflage shelter-quarter over his issue field-gray feldbluse. On his right arm is the dark-green "Grossdeutschland" cuff-title.
The two grenadiers leaving the halftrack have the newly issued reversible mouse-gray and white winter parkas. While this garment was in short supply most of the Winter in 1942-43, this elite unit got them early and in sufficient quantity.

The back cover is the only other color illustrations provided. It shows 4 combat schemes:

1. Grossdeutschland panzer-grenadiers dismounting from a Pz.Kpfw. IV Ausf. D of the 3rd Panzer Div. in fornt of a Russian held tree-line, south of Moscow, Winter 1941.

3. Outposts holding up Russian attack near Targul Frumos, Rumania, May 1944. The standing Feldwebel is wearing an army summer camouflage smock and helmet cover and is firing a MP44.

The intent of this book is to show the history and eventual fate of all the "GD" units. To make this a pictorial history as clear as possible, the text and photographs have been arranged by year. Brief chronologies at the beginning of each yearly chapter relate the combat actions of "Grossdeutschland" and its sister units to the historical events of the period. In this way, a better understanding may be gained of the detailed information in the text, photos and captions.

The book contains 268 wartime black and white photos, illustrations of the Grossdeutschland and Wachregiment shoulder patches.

On the last page are illustrations of the covers of 3 other Panzer Colors series books by Squadron.

Although this book could have stood a lot more color, it has very interesting photos throughout of Grossdeutschland's operations during WWII.