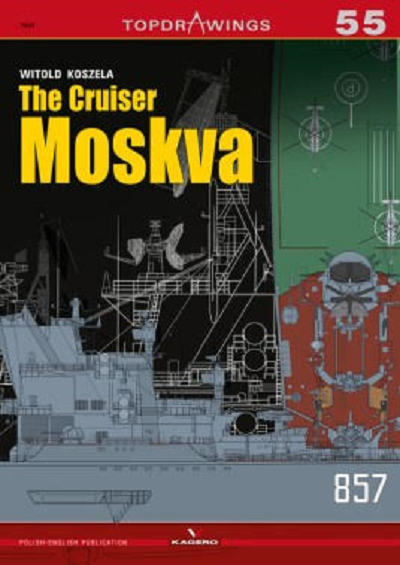 The work on the design of future long-range active anti-aircraft and anti-submarine ship - as it was initially determined - was conducted by the Leningrad CKB-12 in close cooperation with OKB-938 led by N.I. Kamov.

The author of the ship's design, which was given the number 1123 and the code name "Kondor", was A.B. Sawiczew, and from 1967 - A.W. Marinich. The main task of the ship was to search and destroy American nuclear submarines carrying "Polaris" ballistic missiles in the Antarctic Ocean and Barents Sea.

Kagero is a publisher based in Lublin, Poland. They do their books in both Polish and English. This book is all in English.

The book comes in a self-sealing clear cello bag.

The cover art shows the center section of the Moskva as a grey line drawing. To the right of it on an orange area is a color illustration of it's top.

On it's face side is a 1/400th scale line drawing showing the starboard side twice. One is the helicopter arrangement and a starboard view with all the equipment named.

The reverse side has 3 1/144th scale line drawings showing Moskva at end of service. The port, starboard and top sides.

A second sheet is the same size. It is in full color and printed on slick paper.
The face side has a 3-view of Moskva in early service in 1/400th scale.

In the book is a 2-view in no mentioned scale showing the hull and starboard side.

The back cover has a 3-view color illustration of the Moskva as seen in end of its service colors. No scale is given for this illustration.

This is a neat book. It will be of interest to nautical historians and modelers alike.  Although I don't know if a model kit of it exists?

I want to thank Casemate publishing, who sent me this sample and the folks at Kagero as well. Casemate is the N.American distributor of Kagero books and all their titles can be viewed at:
www.casematepublishing.com