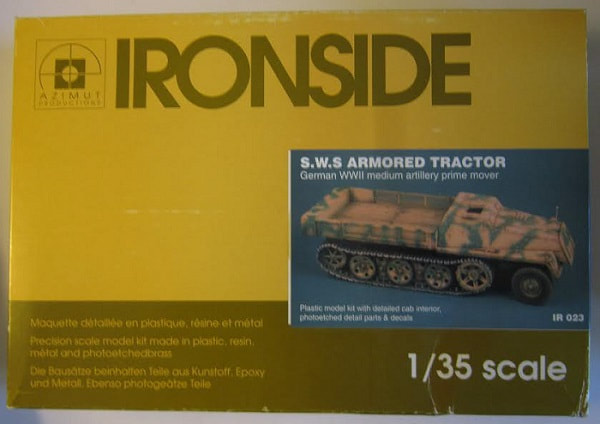 Kit no. IR023
By Ray Mehlberger

The Schwerer Wehrmachtschlepper (Heavy Military Tractor), or sWS, was a German World War II half-track vehicle used in various roles between 1943 and 1945. The unarmored models were used as supply vehicles and as tractors to haul artillery. Armored versions mounted anti-aircraft guns or a 10 barrel rocket launcher (Nebelwerfer). Less than a thousand were built before the end of the war, but production continued after the war of an improved model in the Tatra plant in Czechoslovakia.

On 7 May 1942 Hitler ordered development of a simple, low-speed, half-track, load-carrying vehicle for use on the Eastern Front. Büssing-NAG was selected to develop a new 5 t (4.9 long tons; 5.5 short tons) tractor (Zgkw. 5t neuer Art) to replace the earlier 5 tonne Sd.Kfz. 6 and 3 t (3.0 long tons; 3.3 short tons) Sd.Kfz. 11 half-tracks, as well as the various lesser-known vehicles of the same class.

Production started in December 1943 at Büssing-NAG.Early examples used a truck-like, unarmored cabin similar to the earlier half-tracks it replaced, while later examples featured an armored cabin and engine compartment that looked similar to the Sd.Kfz. 251 armored personnel carrier.

Like the earlier Demag-designed Sd.Kfz. 10, the sWS's suspension system consisted of five double roadwheels per side, overlapping and interleaved in the Schachtellaufwerk (de) layout, mounted on swing arms sprung by torsion bars. One idler wheel, mounted at the rear end of each track unit, was used to control track tension.

Tatra also joined in production, but together both factories produced only 825 vehicles in total. Tatra continued production of an improved vehicle after the war as the T809.

In addition to the basic cargo role, the vehicle was adapted as a mount both for the medium 3.7 cm FlaK 43 anti-aircraft gun and the quadruple 20mm flak gun. These mounts were placed at the center of the cargo area with a large gun shield.

The sides of the cargo compartment folded down to give the crew more room to serve the weapons. Ammunition was carried at the rear of the cargo area. Another modification was the Panzerwerfer 42 auf sWS, a 10-barreled 15 cm (5.9 in) Nebelwerfer 42 rocket launcher placed over an armored ammunition storage compartment; it was built over the cargo area that was intended to replace the 15 cm Panzerwerfer auf Sf (Sd.Kfz. 4/1), commonly called the Maultier

Azimut/Ironside was a model company that only produced AFV kits. They were located in Paris, France and I believe are now long out of business.

This kit came in a very sturdy shrink-wrapped tray and lid type box.

The box art shows a color photo of the S.W.S. model made up. It is in a base of earth-yellow with dark-green bands and no markings. This photo is glued to the lid of the yellow and orange box.

One corner of the box says the kit contains a precision scale model kit made in plastic, resin, metal and photoetched details, in French, German and English.

It further also says its a plastic modle kit with a detailed interior, photoectched detail parts and decals.

One side panel says "The Ironside range offers high precision scale modles in 1/35th scale, developed from extensive data research based on wartime documents, manufacturers archives and museum collections.", in French and English.

The other side panel says the kit is not for children under 14 years of age.
​WHAT'S IN THE BOX:

The contains 6 light-grey trees and 8 chalk-white trees not in  cello bags, 2 small chalk-white trees, resin parts and a brass PE fret in a zip-locked cello bag, the decal sheet, the instructions and a kit catalog sheet.

Trees are not alphabetized and there are no part number tabs next to the part on the trees, nor any parts trees illustrations in the instructions.

The instructions consist of two 8 1/2" x 12" sheets folded in the centers to create 8 unbound pages.

Page 1 begins with an inky illustration of the S.W.S., over it's history in French and English.
Spread across pages 2 and 3 is an exploded assembly drawing with text in Japanese, English and French.

The illustrations here are for assembly of the chassis, running gear and tracks.

Page 4 is the assembly drawing for the cab interior, over a illustration of the brass PE fret.

Spread across pages 6 and 7 are 2 more exploded drawings for assembly of the upper portions of the S.W.S.

The reverse side has a one paragraph history of the S.W.S. in English, with 3 photos of actual S.W.S.s, a cut-away line drawing of the tractor and a line drawing of the cargo carrier version, Azimut/Ironsides street address in Paris, France is provided. 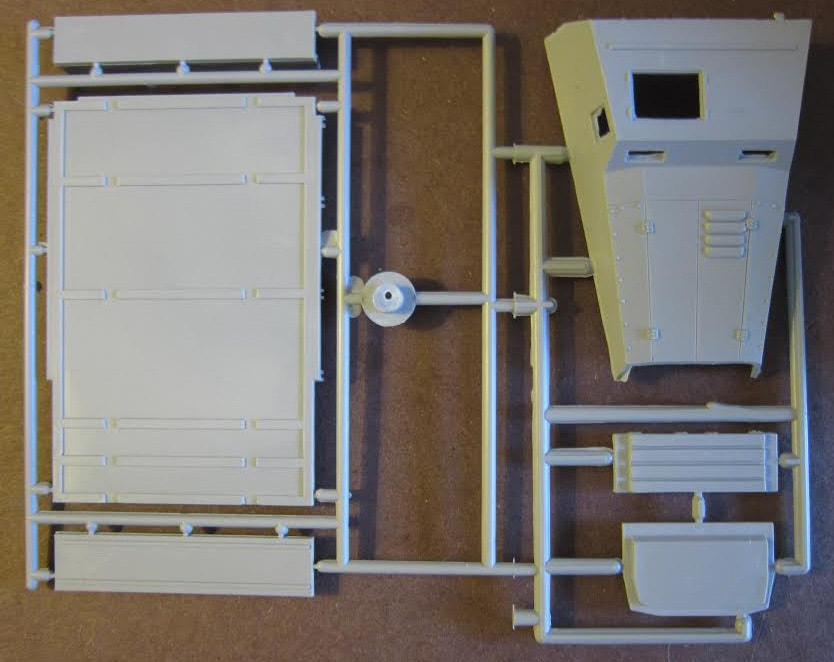 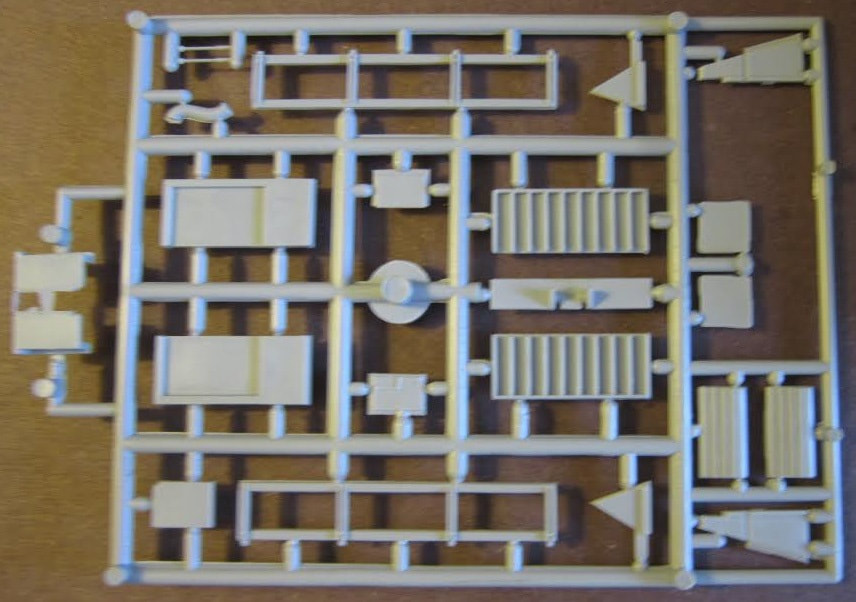 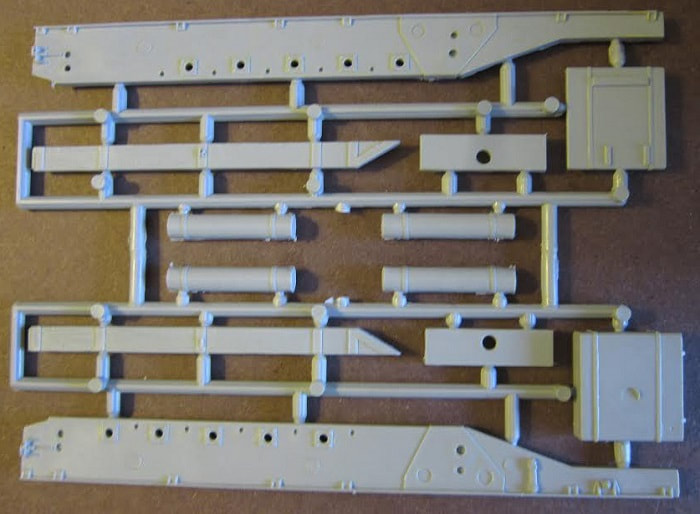 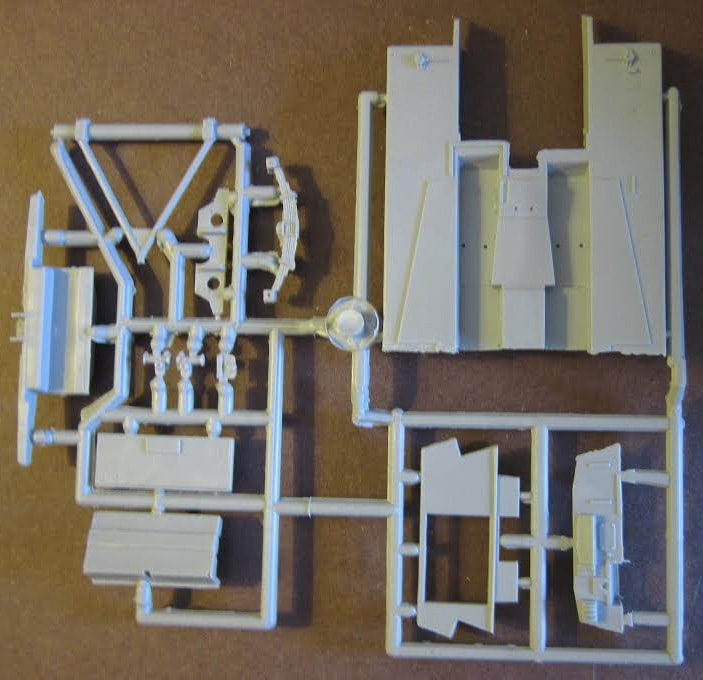 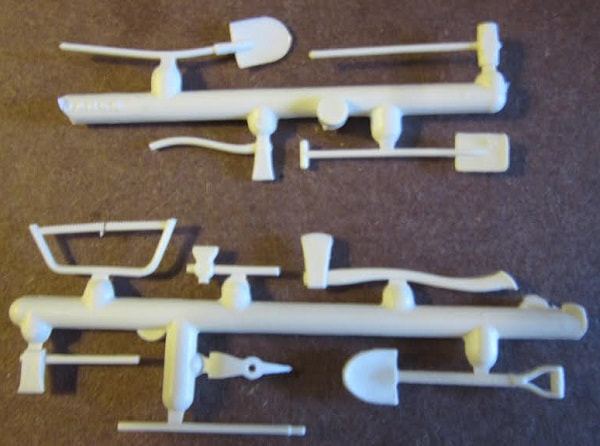 The 8 chalk-white trees are identical. Each holds 3 road wheels, 2 spreader bars, 2 bogies and link and length type tracks (21 parts each). 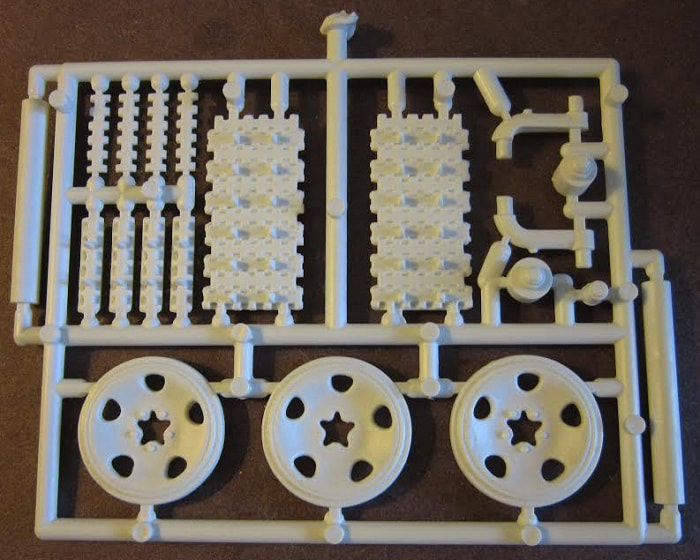 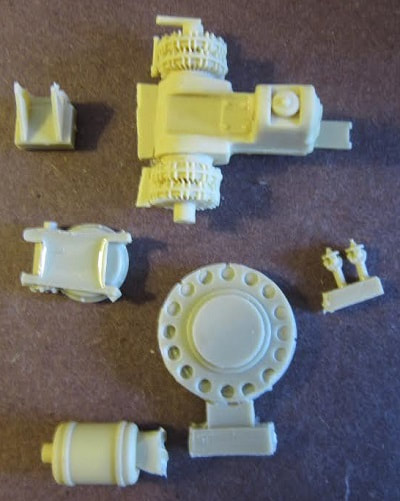 ​The brass PE fret is next. It holds: screening for the cargo area walls, the dashboard framing etc. (24 parts) 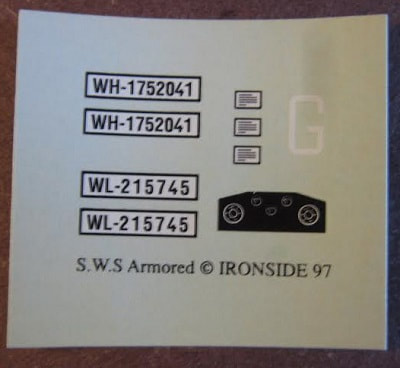 ​This is a nicely detailed kit with a complete engine compartment. However, surgery will have to be done to the hood to open it and show the engine. The drivers compartment is well detailed too.