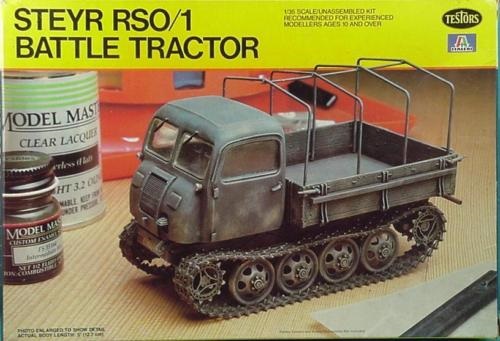 When Germany first invaded Russia, the Wehrmacht transport system consisted primarily of horse-drawn wagons and light trucks. The long distances to be covered, coupled with adverse weather and terrain conditions soon proved the inadequacy of this system. During the summer months the Russian steppes became a choking dust bowl. During spring the roads turned into great quagmires of impenetrable mud. The Wehrmacht immediately drew up specifications for a new type of transport truck which would be more able to deal with these problems.

The RSO (Raupenschlepper Ost or Tractor East) was designed in 1942 by the Steyr Werks of Austria. Requirements demanded that it be simple to produce and easy to maintain. The fully tracked running gear gave the RSO excellent cross-country ability and the fully enclosed, heated two-man cab provided crew comfort in cold weather. The Steyr V-8 engine was situated between the crew seats on a sturdy box monocoque chassis.

Over 27,000 RSO tractors were produced in three different versions by Steyr, Klokner-Deutz-Magirus, Ulm Graf und Stift, Wein, Auto Union, Wanderer, and Siegmar. Although designed primarily for carrying cargo, the RSO was often used as a prime mover for towing light artillery pieces such as the Nebelwerfer (Testor kit No. 782 at one time) and the Pak 40 (Testor kit No. 857 once). The RSO served on all fronts and was popular with the German troops.

This  kit came in Testor’s signature bright orange end-opening type box, that they marketed many of the Italeri kits in. It has a cardboard tray that slides out and it snuggly fits the outer box. I like this as it keeps parts from getting out past the end flaps, which is a curse of end-opening boxes which I’m not fond of.

The box art is a color photo of the model made up and sitting on a work bench surrounded by tools and paints. It is in overall panzer grey with the Luftwaffe license plate no. WL-110 on the front. The length of the finished model is said to be 5”.The back of the box has 8 color walk around type photos of the Steyr on the box art. Credit is given to Mike Good for building it. There is a copyright date of 1982 and a list of features in the kit.

One side panel has a one paragraph history of the Steyr followed by a color side view illustration of it.in overall panzer grey.

The other side panel has a list of materials required to complete the kit. Testor brands of glue and paint and their hobby tools, brushes and tape are listed, followed by a repeat of the color profile shown on the other side panel.

The kit’s molds origin is Peerless, who in the 80’s went out of business in Japan and sold most of their molds to Italeri. Italeri marketed the kit as kit no. 227 and then went in cooperation with Testor’s for this Re-issue. I saw a listing and box art for a RSO/1 by Tamiya on the internet too. Theirs was kit no. 32404 and I strongly suspect that it too was the ex-Peerless or Italeri molds.

Inside the box, in the tray, is a single sealed cello bag with 4 dark olive drab trees of parts, a single cab shell part (also dark OD) a tree of clear parts, rubber-band type tracks, the decal sheet and instructions.

The instructions consist of 2 large sheets that are folded in the center and then inserted into each other to form a 8 page unbound booklet of 8 ½” x 11” page format. A single loose page, printed on both sides of the same size accompanies the booklet.

Page 2 is the parts tree illustrations.

Pages 3 through 7give a total of 9 assembly steps. Next to these steps is blow by blow instructions of how to proceed in each step. Good move Testors! Painting and weathering instructions begin on the bottom of page 7 and all of page 8.

The single sheet in the kit has four 3-views for various schemes to paint and mark the model. However we are not told what units these represent.

The first scheme is in dark yellow with dark green and red-brown overspray. It carries SS license plates and what I believe is the division mark for Hitler Jugund Division..

The second scheme is in dark yellow with a white-wash finish over it. It has Wehrmacht license plates and a division emblem that is a white shield with a mailed armored fist on it.

The third scheme is in panzer gray with a squiggly overspray of dark yellow. It has Wehrmacht plates and a division sign of a white shield divided into black and white squares.

The fourth scheme is in overall panzer gray. It has a division mark on the fender that has a parachute on it. I assume it’s for Fallschirmjager division. The license plates have the WL prefix for Luftwaffe unit.

It is too bad that Italeri did not bother to say what units these were. The trees on the parts illustrations are marked with geometric symbols, rather than alphabet letters that are common in most other kits. One tree is marked with a star, another with a circle, one with a square and the clear parts with a black dot. In the assembly steps the parts are marked with one of these symbols and then the part number. Part numbers are on the trees next to the parts like usual. 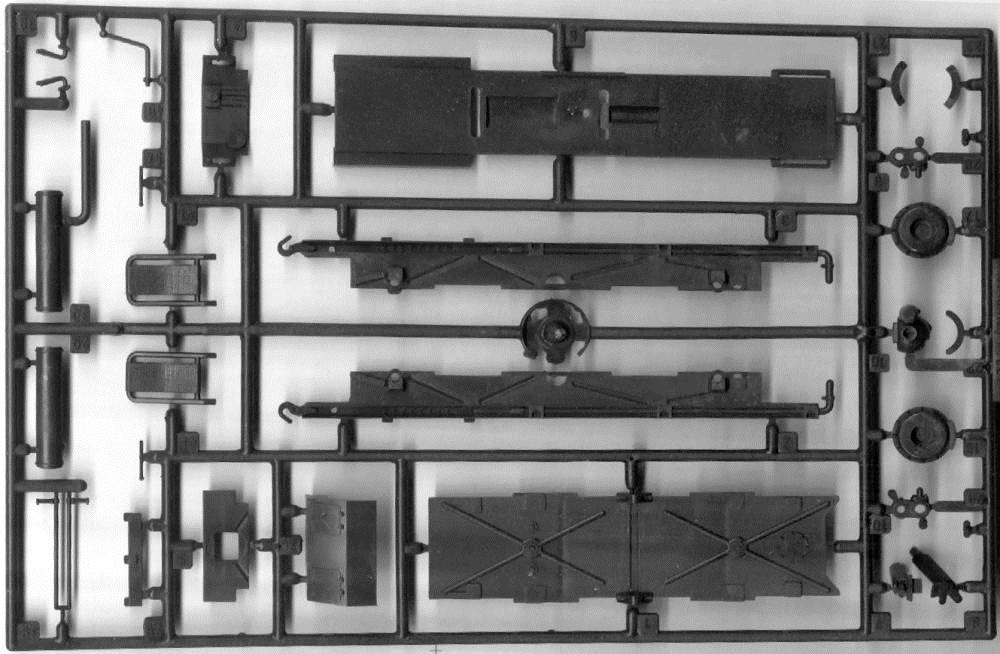 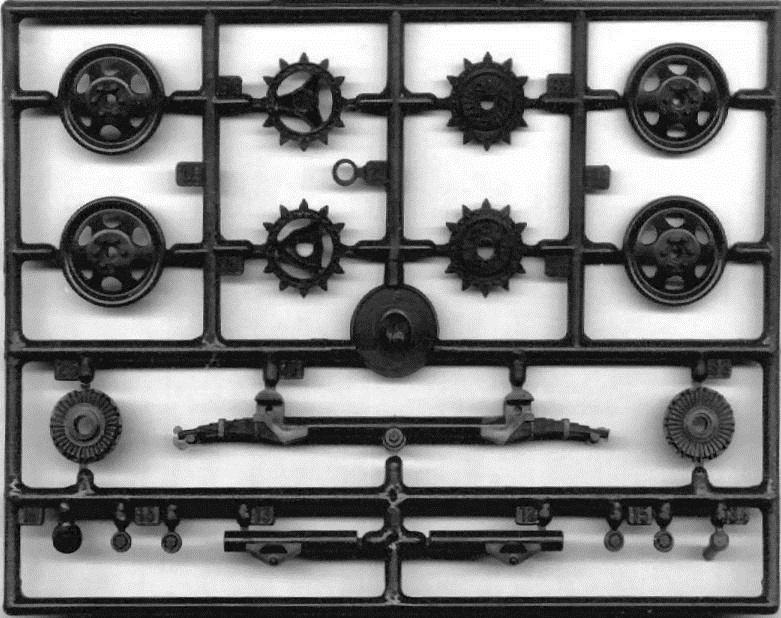 The tree labeled with a square holds: the cargo bed wood walls and floor, the cargo bed’s canvas roof supports, (there is no canvas roof part, but one could be made from tissue wet with Elmer’s glue), the cab floor and doors, the radiator and the slats that go over it etc.(46 parts) 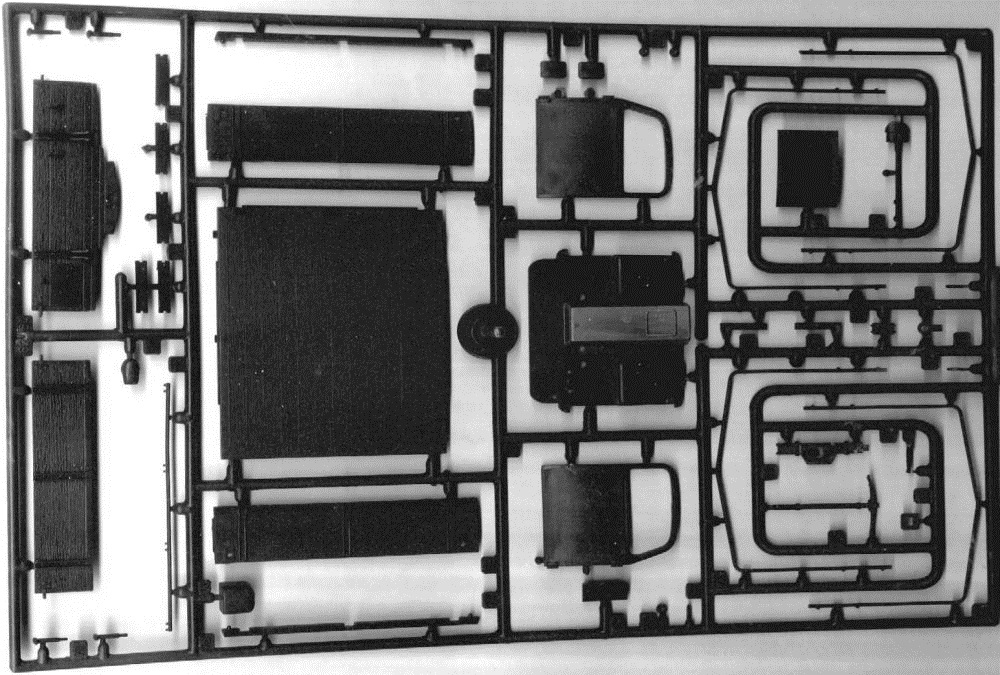 The clear parts tree, labeled with a black dot, holds all the cab windows.(5 parts) 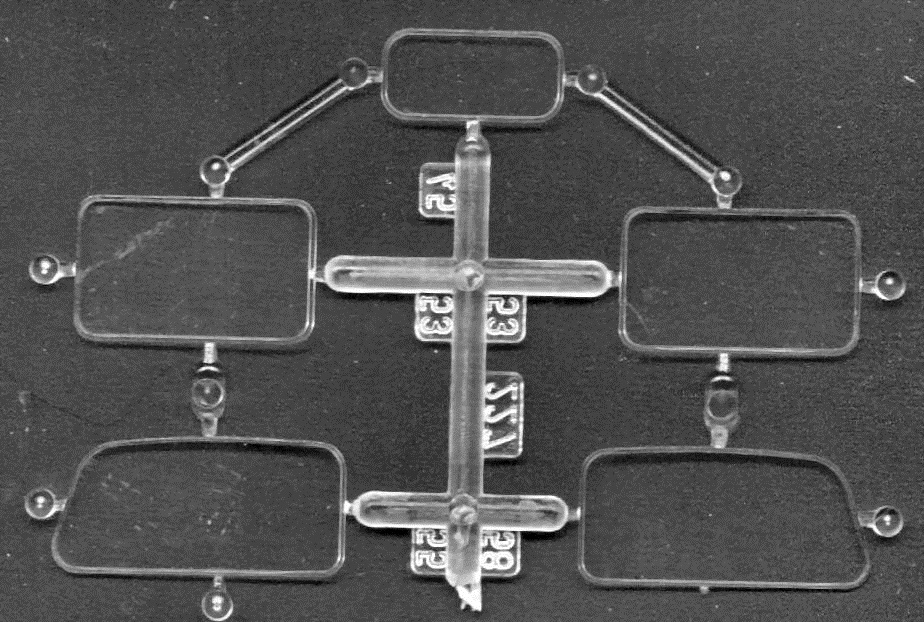 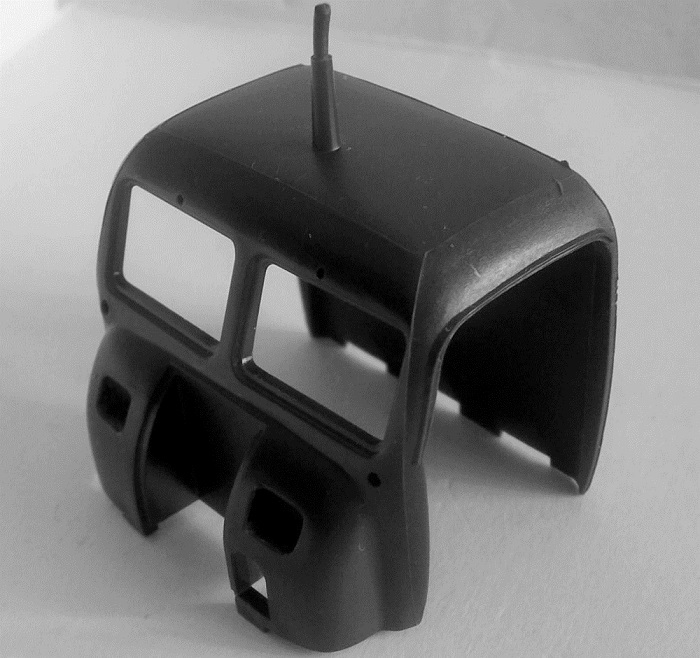 The rubber-band type treads and the decal sheet (already described above) complete the kit’s contents.

I am not a big fan of vinyl rubber band treads. So, I purchased a set of Model Kasten brand individual track links and drive sprockets. This is kit no SK-33 for them. Model Kasten is based in Japan and does several different kits of individual links. 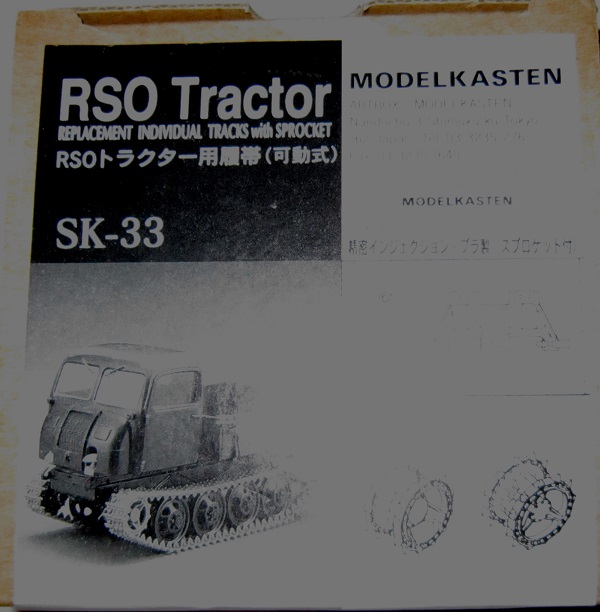 The kit comes in a generic brown box that has a hinged lid. The box art is a sticker with a black and white photo of the Steyr model made up and illustrations of the individual tracks and drive sprockets in the kit. Model Kasten’s street address, telephone and fax numbers are provided. Inside the box are 2 cello bags sealed with scotch tape. One bag holds the individual track links with a connector pin molded onto each link. 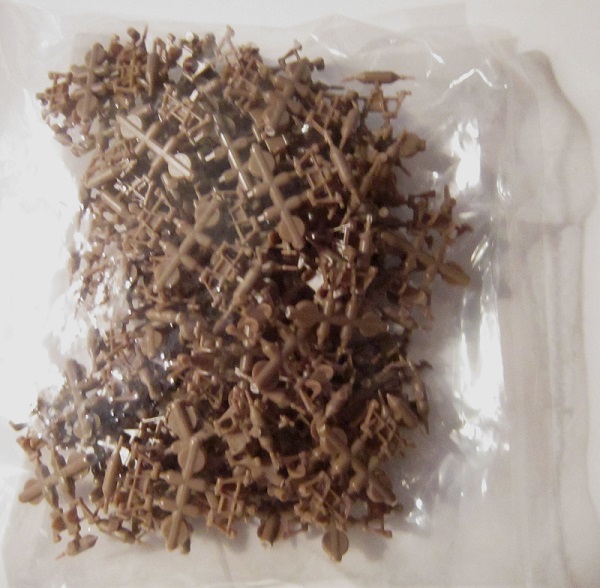 The other cello bag holds two parts trees with the drive sprockets on them (4 parts per tree) All the parts are molded in dark green plastic.

The instructions complete the kit’s contents. The instruction consist of a single sheet folded multiple times to fit the small box. It is in 81/2” 11” format and in English and Japanese. One assembly step is for the links and I believe after assembly they could be workable. That remains to be seen later though. Two other assembly steps are for the drive sprockets. Italeri’s name is mentioned and that tells me that this set was designed to go on my kit by them.

The molds in this kit started life under the Peerless brand back in 1978 as kit no. 3512. It was combined with a nebelwerfer. Italeri got the molds after Peerless folded and released this kit in 1982 as kit no. 227, but without the nebelwerfer.. Actually Italeri released it TWICE that year in different box arts, with the same kit no. The second time still did not have the nebelwerfer., Also in the 1980’ Tomy brand released the molds as their kit no. 08. It was all the same as the original Peerless kit, with the same box art and included the nebelwerfer. Italeri released a version of the Steyr with a square wood cab and pulling a Pak 40 as Kit no. 361 in the 80’s. Also in the 80’s Tamiya brand did a Steyr. I don’t know if this was an original Tamiya molds or the old Peerless ones?? It was kit no. 89404. Finally, Revell of Germany released the Steyr as kit no. 03067 in 2007. I’m fairly sure this one also was the old Peerless molds.

I purchased my kit years ago at my local hobby shop. Although out of production for Testor/Italeri, the Steyr might still be found somewhere in one of the other releases mentioned.