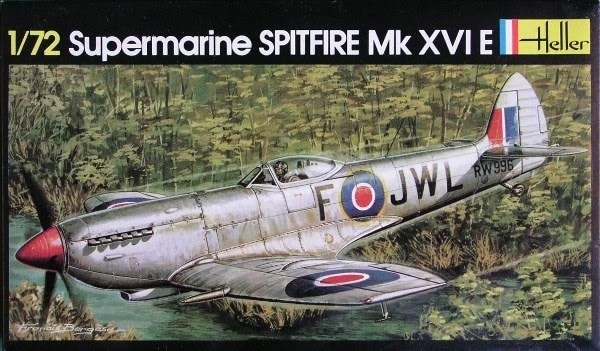 With the Merlin-Packard motor being built in the U.S.,the new Spitfire was given a new number. It was baptized the Spitfire LF Mk XVI. Externally, the early models of the series looked exactly like the Spitfire IX.

The following Spitfire XVI's had a different silhoutte, with their clipped wings of the E type, its allaround vision glass enclosure and its higher drawn fin. Other, less visible changes were also made. 1,055 Spitfire Mk. XVI's were built. Later to be called LF 16. Some countries, line Belgium and Ireland, were equipped with these aircraft.

Heller is an old prolific model company based in France. They manufacture all manner of model subjects in the popular scales.

This kit came in a blousy (1 1/2" too long) shrink-wrapped end-opening type box. I am no fan of this type of box, because invariably parts or the decal sheet find their way past one of the end flaps to become lost forever. Give me a tray and lid type box any day of the week.

The box art shows a Mk. XVIE flying over a jungle. It is overall bare metal with a red spinner. It carries the fuselage code in black of F (roundel) JWL and British roundels in the normal positions along with the British fin flash. Below the elevators is the black serial no. RW996. This aircraft was witht ehe Central Gunnery School, R.A.F., 1948.

Both side panels have a small color profile of the box art subject and another Mk. XVIE that is in a wave pattern of green and grey over a grey undercarraige. It has the sky colored fuselage code D (roundel)GE. Under the cockpit is a logo of a pilots head with victory marks. British roundels are in the normal positions and the British fin flash is on the tail. This aircraft is with the 349th Belgian Squadron, Fassburg, 1945-46.

One side panel further says the kit contains 37 parts and lists Heller brand paint numbers suggested to use to complete the model, but not what those colors are.
WHAT'S IN THE BOX:

Parts trees are in a sealed cello bag.

The instructions consist of a single sheet printed on both sides in 8" x 12" page format, folded twice to fit the box.

One side of the sheet has the history of the Mk XVIE, a list of the parts names, colors of the aircraft, one exploded drawing for assembly, two 2-views of the schemes (already described above) and a custormer assistance coupon. This side is all in French.

The other side of the sheet repeats all this in English and German, but without the 2-views and the exploded drawing.

There are no parts trees illustrations provided in the instructions. However, there are number tabs next to the smaller parts on the parts trees. 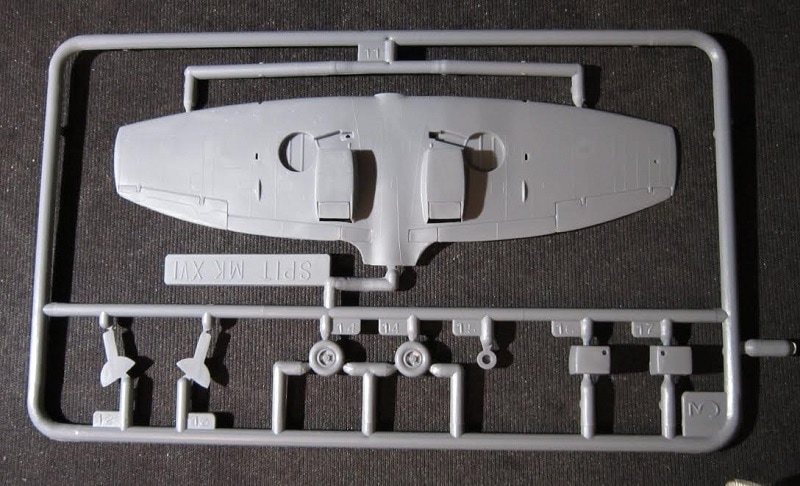 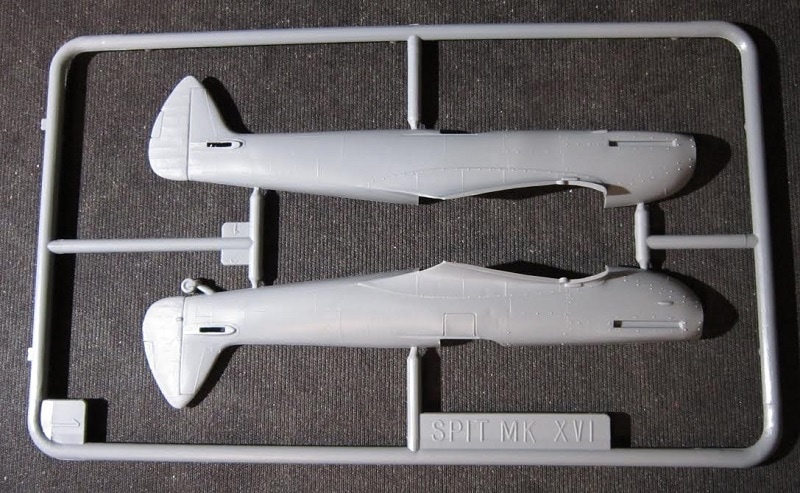 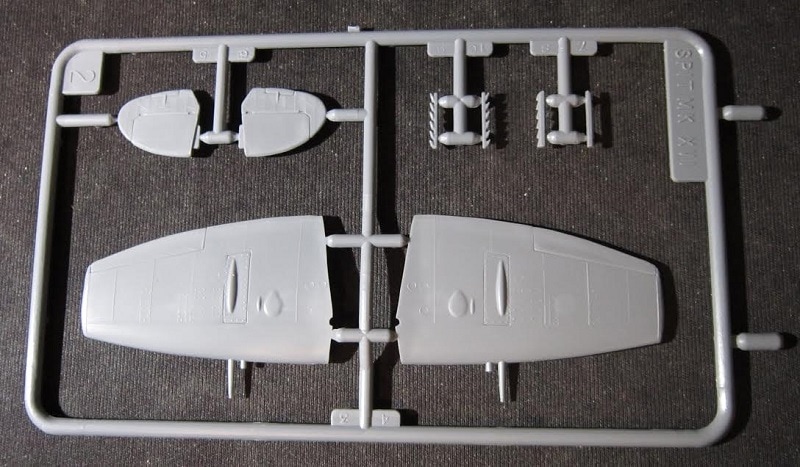 No pilot figure is provided. 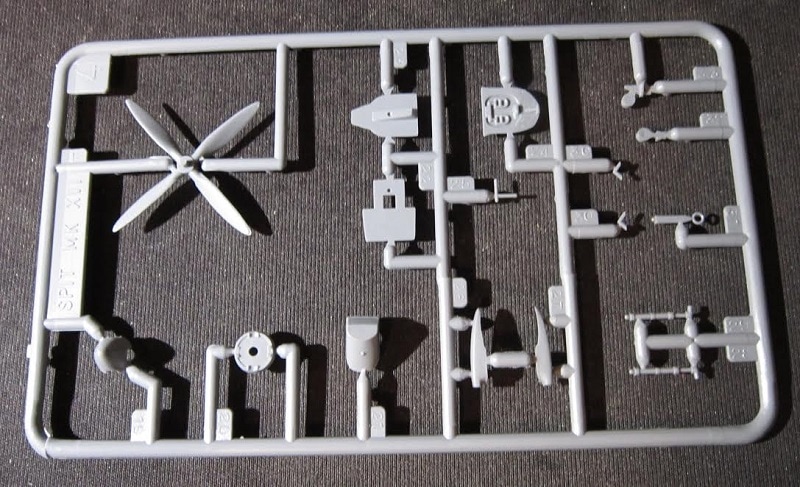 Cockpit can be posed open or shut. 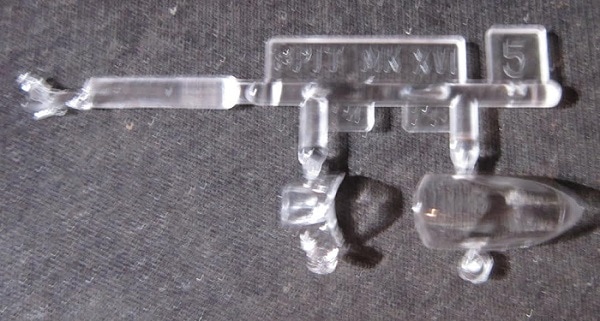 ​The decal sheet completes the kits contents. It does not have the usual frosted sheet with it to protect its face, like found in most other kits from this era. 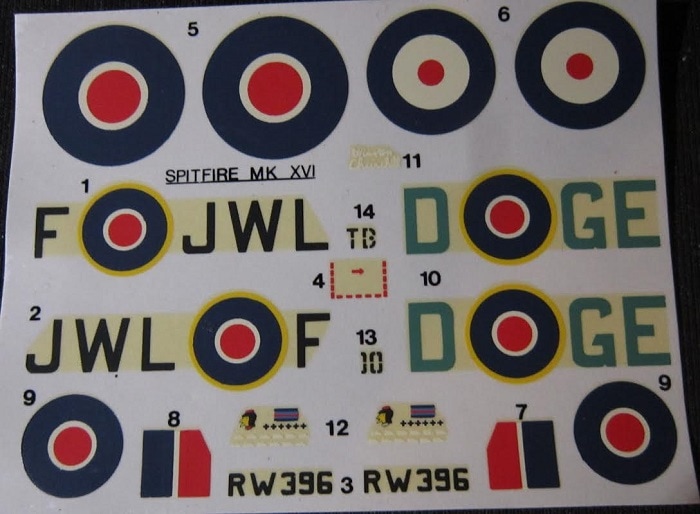 The kit has its control surfaces molded solid. They would take surgery to re-position. Panel lines are of the raised variety.

This kit will make up nicely into a late mark Spitfire.

I bought my kit for a song at a local hobby shop that went out of business.

​ I am willing to sell this kit for a reasonable offer.