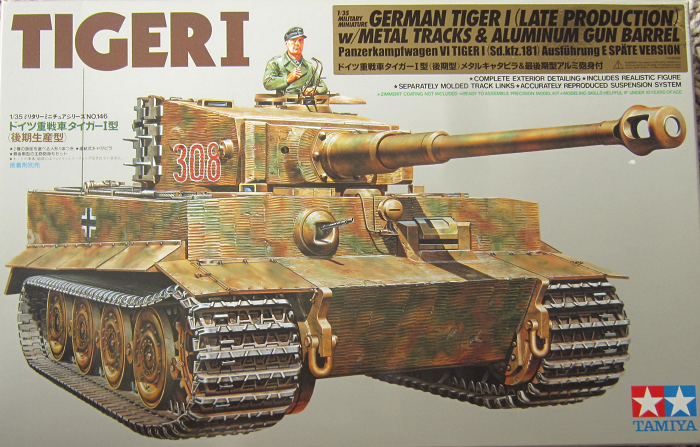 I won my kit in 2011 at a IPMS contest raffle in Fridley, MN.
HISTORY:

At the time of its introduction, in 1942, the German Tiger I was the most powerful and sophisticated tank available in the world, and is still considered a weaponry masterpiece of that era.

Most of the Tiger I's were produced by Henshel, a heavy industry manufacturer in Germany. The later versions of the Tiger I went into production in January 1944, almost two and a half years after its debut.

Many features like the thick armor plating, measuring up to 100 mm in thickness at some areas, remained unchanged. Road wheel improvements consisted of replacing the rubber rimmed road wheels with new wheels that ran on steel rims, which were insulated from the hubs by two rubber rings clamped between disc-shaped pressings.

Changes made to the turret were a commander's cupola with seven vision ports, an anti-aircraft machine gun ring, and a side pivoting hatch, a loader's hatch with periscope, the smoke exhaust outlet relocated to the center of the turret, and internally mounted "S" mine dischargers.

The 88 mm KwK 36L/56 main gun was considered for replacement with the KwK 43 L71 cannon as used on the King Tiger, but was never accomplished. It has been said that one Tiger I tank was equal to the Sherman tanks on the battlefield and it was the most feared and respected of all German tanks during the conflict.

The Tiger I  is a German heavy tank of World War II deployed from 1942 in Africa and Europe, usually in independent heavy tank battalions. Its final designation was Panzerkampfwagen VI Tiger Ausf. E often shortened to Tiger.

While the Tiger I has been called an outstanding design for its time, it was over-engineered, using expensive materials and labor-intensive production methods. The Tiger was prone to certain types of track failures and breakdowns, and was limited in range by its high fuel consumption.

It was expensive to maintain, but generally mechanically reliable. It was difficult to transport, and vulnerable to immobilization when mud, ice and snow froze between its overlapping and interleaved Schachtellaufwerk-pattern road wheels, often jamming them solid.

This was a problem on the Eastern Front in the muddy rasputitsa season and during extreme periods of cold.

The tank was given its nickname "Tiger" by Ferdinand Porsche, and the Roman numeral was added after the later Tiger II entered production. The initial designation was Panzerkampfwagen VI Ausführung H (‘‘Panzer VI version H’’, abbreviated PzKpfw VI Ausf. H) where 'H' denoted Henschel as the designer/manufacturer.

Today, only about seven Tiger I's survive in museums and private collections worldwide. The Tiger 131 at the UK's Tank Museum, which was captured during the North Africa Campaign, is currently the only one restored to running order.

The box art shows a Tiger I against one of Tamiya's signature all-white backgrounds that they use for the majority of their box arts.

it is in a wave-pattern of earth-yellow, dark-green and red-brown, with a red 308 outlined in white on the sides of the turret and a German cross on the sides of the hull. It is covered in zimmerit (not on the parts on the kit). The commander is looking out of the upper turret hatch. He is wearing a grey leather double-breasted jacket and a cloth field cap.

In very small print it says: WARNING - this model contains chemicals which are known to the state of California to cause cancer, birth defects or other reproductive harm. I think they are referring to the lead content in the metal track links.

One side panel has a 3-view of the Tiger I in a 3-tone scheme of dark-yellow, dark-green  and red-brown, with a red 1 outlined in white on the turret sides and a German cross on the hull sides.

The main instructions consists of a single-sheet that accordion-folds out into 8 pages in 7" x 10 1/4" page format.

Page 1 begins with the history of the Tiger I in 6 languages, including English, over a black and white photo of the model made up in the box art scheme, over the history again in Chinese and Japanese.

Page 2 begins with READ BEFORE ASSEMBLY instructions, suggested tools to use and a paint color listing of Tamiya brand paints, in multiple languages, including English, over the first assembly step.

Page 3 through 8 give a balance of a total of 15 assembly steps.

A second instruction is the painting and marking instructions, printed on both sides in 7" x 10 1/4" format.

It has a 3-view of the box art scheme, over a side view of a Tiger I in a wave-pattern of dark-yellow and dark-green, with a German cross on the hull sides and you can use either an outlined 3 or black 007 on the turret sides.
We are not told what units these were with.

Painting and assembly instructions for the commander figure are also shown here. Tamiya's street address in Shizuoka City, Japan is at the bottom of the page.

A small single-sheet printed on both sides in 8 1/4" x 4" format has  track assembly instructions on one side (either the injection molded plastic or the metal ones).

There is a warning sticker on the cello bag that the metal track and length of wire are in that has a warning that the track contain lead.

On the reverse side is the assembly instructions for either the injection molded plastic ones or the turned aluminum one).

There are also instructions on how to create zimmerit with putty. 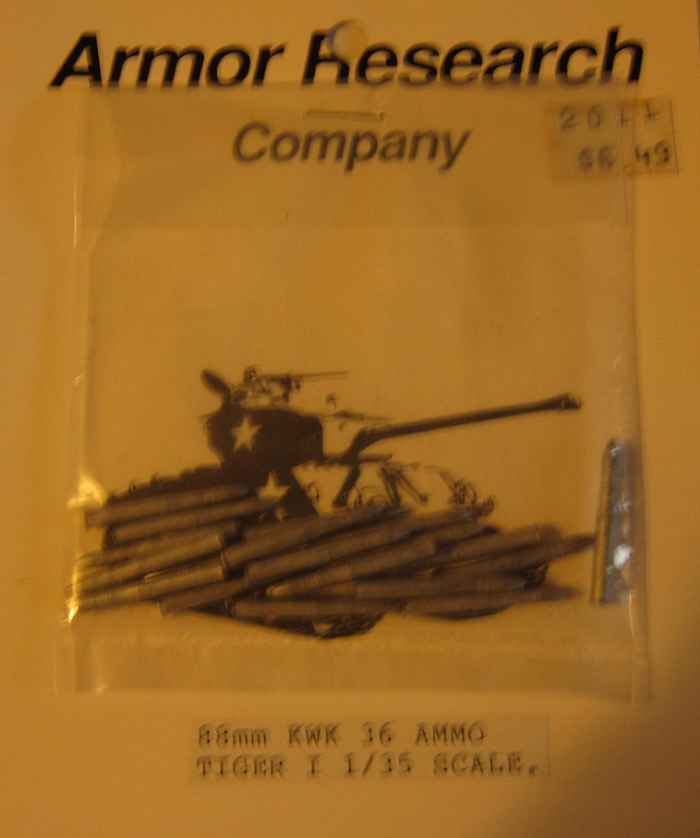 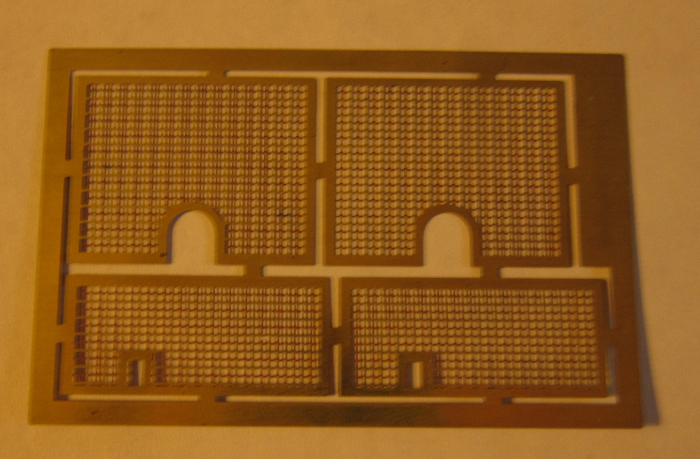 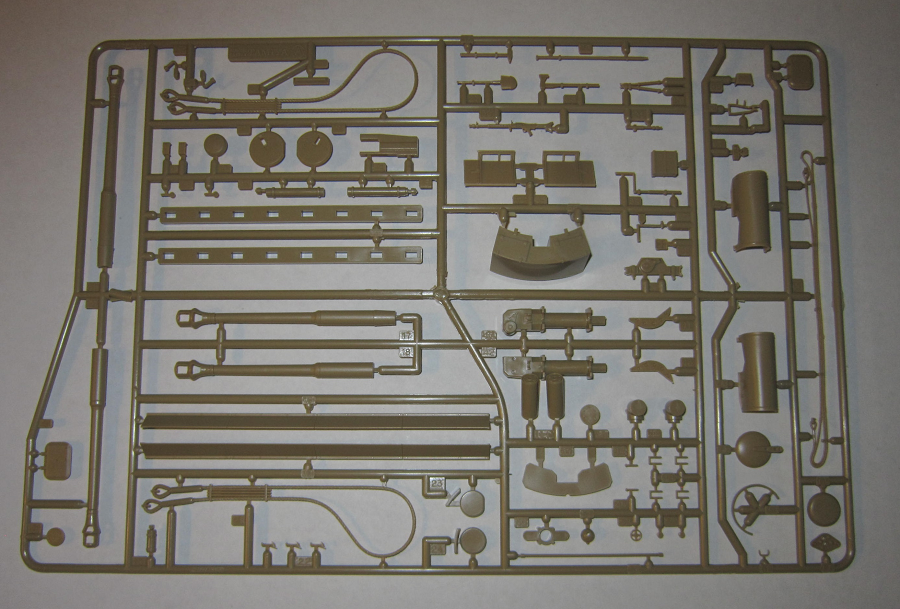 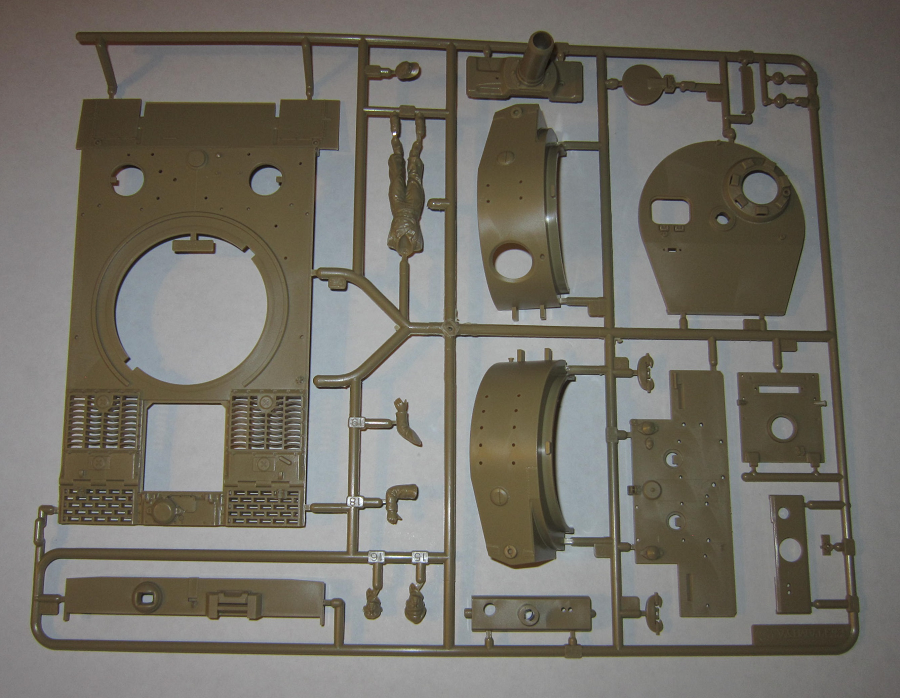 The one piece hull tub. 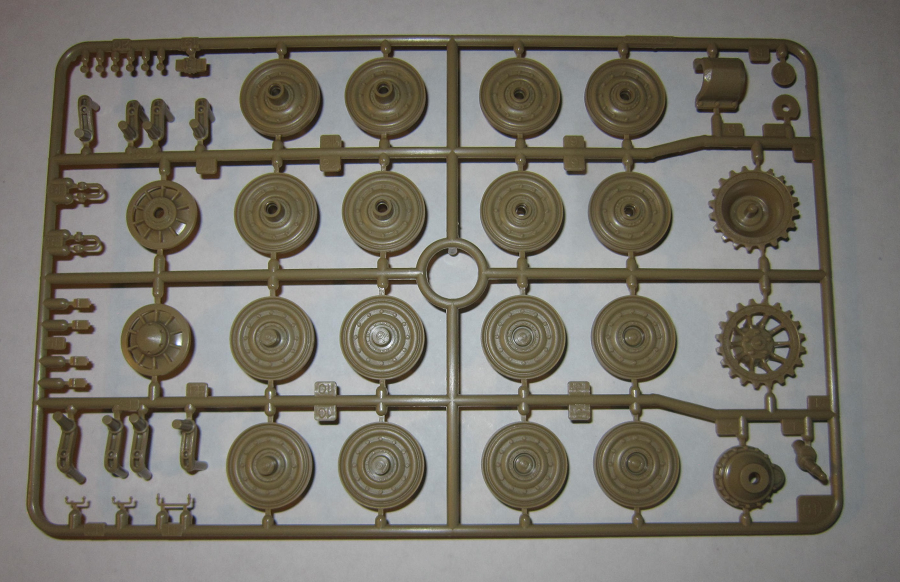 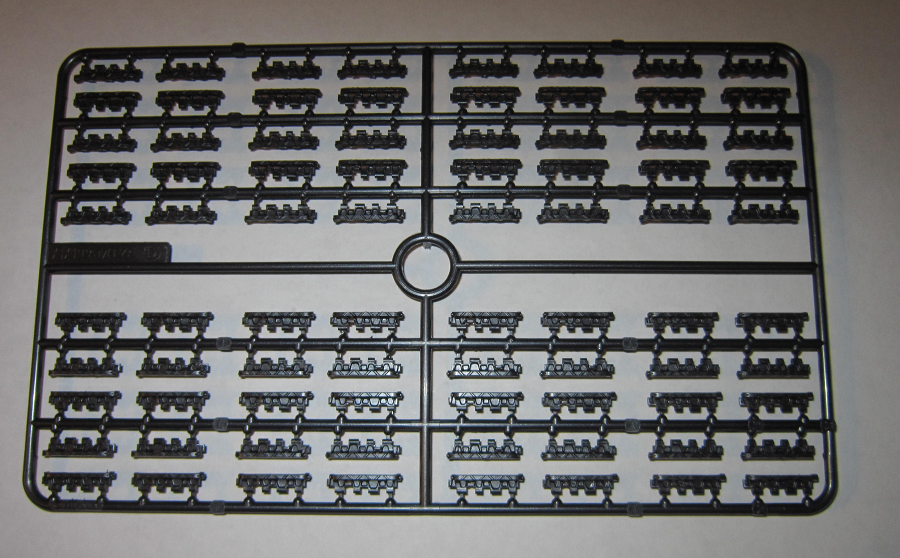 ​The large decal sheet has the major markings on it. However, the black knight on horseback is facing the same direction twice. A smaller decal sheet corrects this by having him face two directions. 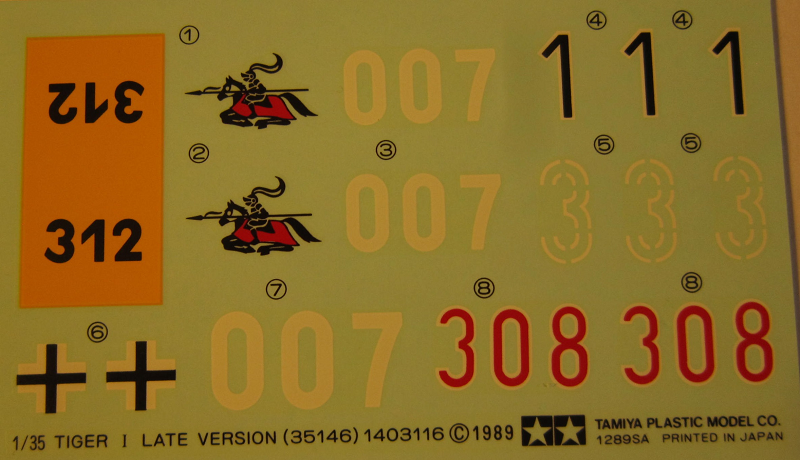 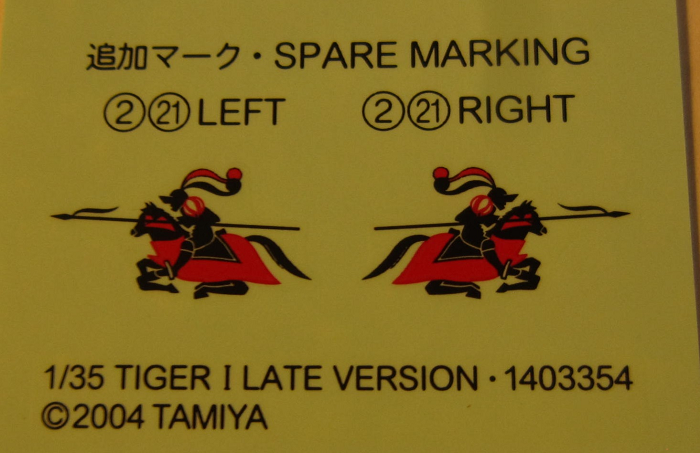 ​There are no clear parts included in the kit. The only internal detail is a couple seats and main gun breech inside the turret. Nothing inside the hull. All the hatches can be posed open or shut and they have locking mechanism details inside them. I think I will looks for an after-market set of interior detail for the Tiger I to add.

The length of wire is to cut pins from to use to attach the metal links together. The track links complete the kit contents. 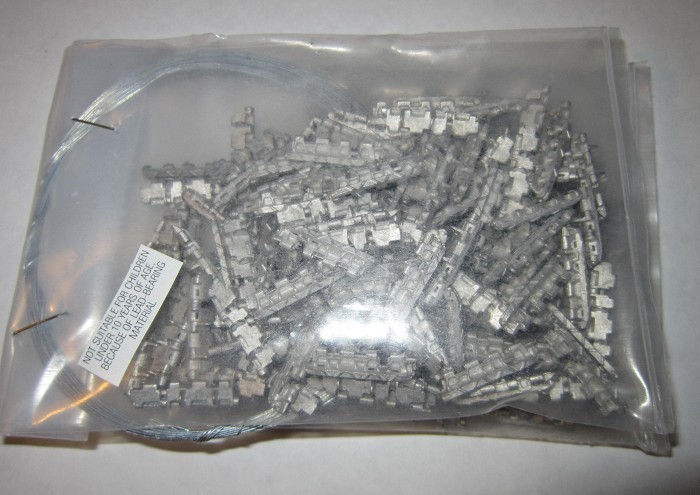