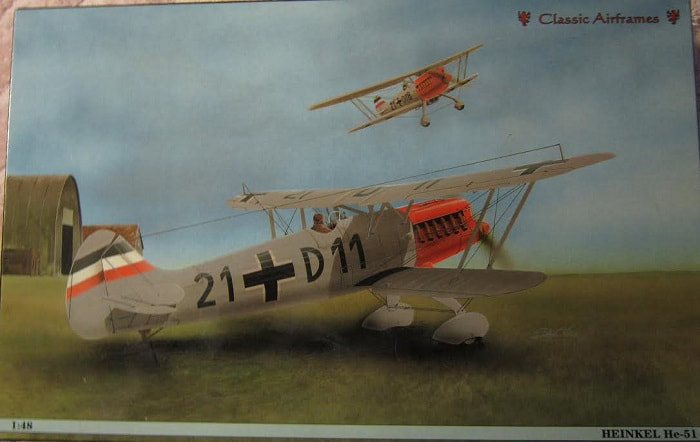 he Heinkel He 51 was a German single-seat biplane which was produced in a number of different versions. It was initially developed as a fighter, a seaplane variant and a ground-attack version were also developed. It was a development of the earlier He 49.

In 1931, Heinkel recruited the talented aircraft designers Walter and Siegfried Günter. Their first major design for Heinkel was the Heinkel He 49.While this was officially an advanced trainer, in fact it was a fighter. The first prototype, the He 49a, flew in November 1932, and was followed by two further prototypes, the He 49b, with a longer fuselage, and the He 49c, with a revised engine.

The type was ordered into production for the still secret Luftwaffe as the He 51, the first pre-production aircraft flying in May 1933. Deliveries started in July of the next year.

The He 51 was a conventional single-bay biplane, with all-metal construction and fabric covering. It was powered by a glycol-cooled BMW VI engine, with an armament of two 7,92 mm (.323 in) machine guns mounted above the engine.

The He 51 was intended to replace the earlier Arado Ar 65, but served side-by-side with the slightly later Ar 68. The He 51 was outdated the day it entered service, and after an initial run of 150 production fighters, the design was switched into the modified He 51B, with approximately 450 built, including about 46 He 51B-2 floatplanes,[and then finally a further 100 He 51C light ground-attack plane.
​THE KIT:

Classic Airframes was a division of Bringuier Aviation Products based in Chicago, IL at one time. I believe they went out of business.

The kit was made in the Czech Republic and boxed in the USA.

The box art shows a He-51 warming up its engine for take-off on a grassy runway by a hangar. A second He-51 is flying over.

The He-51 that is warming up for take-off has a black fuselage code of 21 + D11, which is repeated under the lower wings.

The one flying over has the fuselage code in black of 21 + D18. Everything else the same. This code is not on the decal sheet.

One side panel repeats the box art smaller in color, followed by a one paragraph history of the He-51 over the warning that the kit is not suitable for children under 3 due to small parts. Classic Airframe's P.O. address in Chicago, IL is provided. Kit is said to have been made in the Czech Republic.

The other side panel is the same except for features of the kit being listed as: Contains finely detailed plastic polyurethane and PE parts. Complete cockpit interior. Markings for 2 aircraft. Complete assembly and decorating instructions.
​WHAT'S IN THE BOX:

This kit contains 2 light-grey trees in a sealed cello bag. Tan resin parts in a stapled-shut cello bag. A brass PE fret and photo negatives in another stapled shut cello bag with a stiff card backing and the decal sheet.

There are 2 instructions sheets in the kit.

One instructions consists of a single sheet folded in the center to create 4 pages in 7" x 9" page format.

The 1st page of this instructions has the parts trees illustrations and instructions to use super-glue to attach the PE and resin parts.

Page 2 begins with international assembly symbol explanations, over the first 9 assembly steps. These steps are not numbered.

The second instruction sheet is 7" x 8" format, printed in color on slick-coated paper. 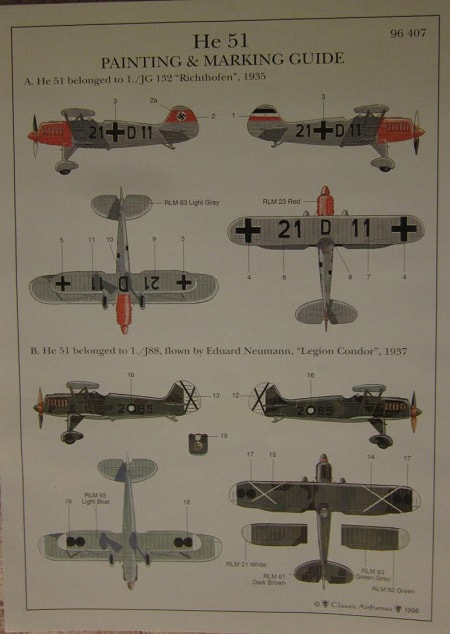 ​One side has the history of the He-51. The other side has two 4-views:

2. A He-51 in RLM 63 green-grey over RLM 65 light-blue underside. Fuselage code is black (roundel) 85. It has white wing tipps on the upper and lower wings, a white rudder with a large black X on it. There are two black circles connected side by side above the upper wings outboard of a large white X. The circles are repeated below the lower wing.

The roundels on the fuselage sides is a white circle with a wide black outline.

The trees in the kit are not alphabetized and have no number tabs next to the parts. 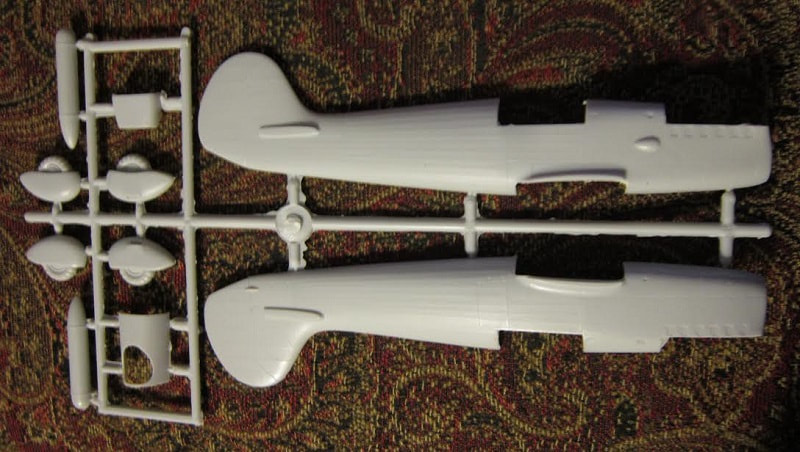 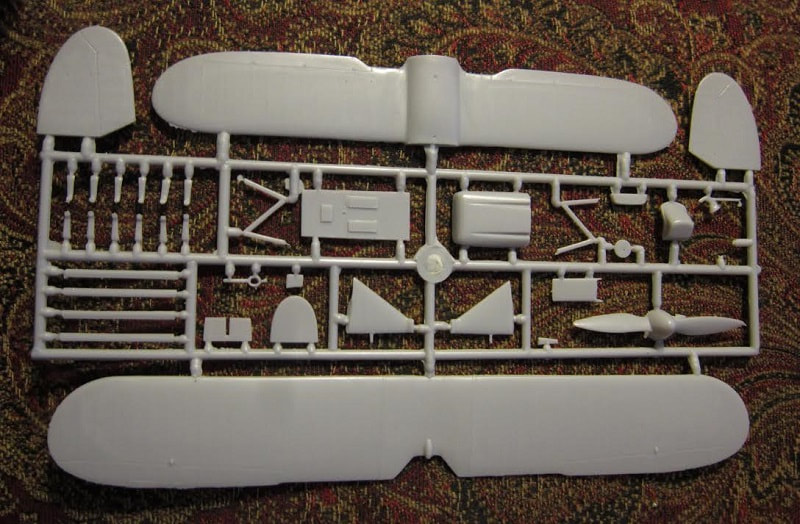 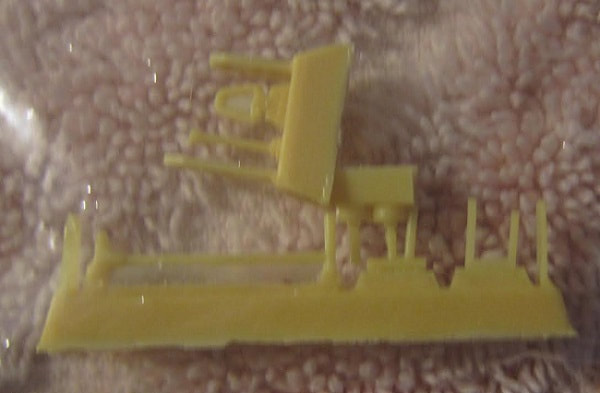 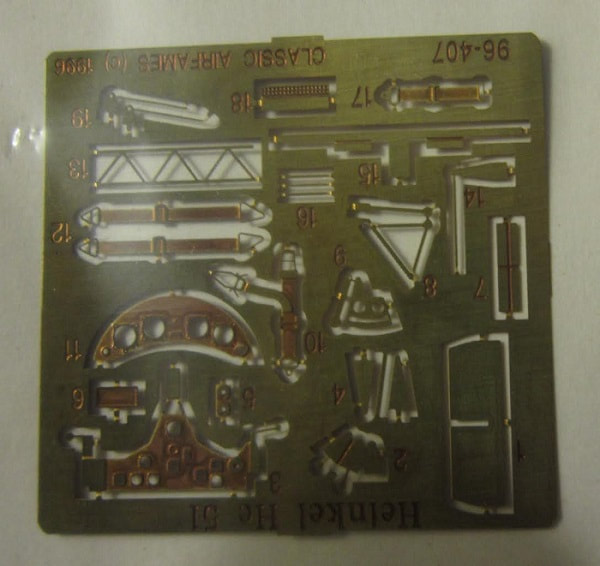 ​The black photo negatives are of the instrument dials and clear windshield. (3 parts) 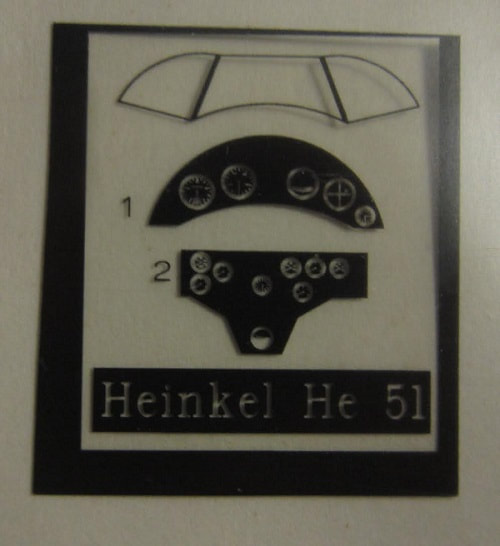 The decal sheet completes the kit contents.​ On the sheet the swastika for this scheme must be assembled from 2 parts. I assume this is to keep the kit politically CORRECT in countries where the swastika is a no no. 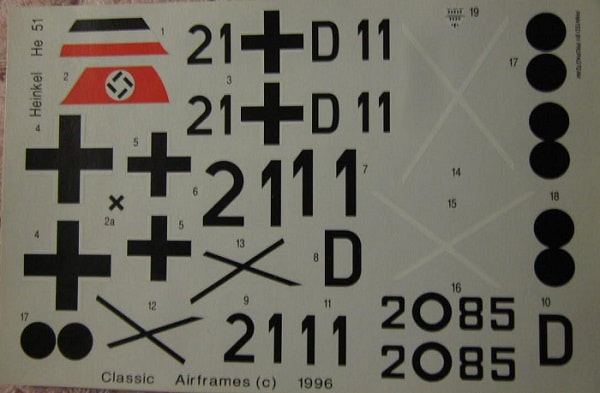 This is a neat kit that is highly detailed. Recommended to modelers of advanced skills that have assembled other kits of this complexity.
​I bought my kit at my local hobby shop back in the 90's.