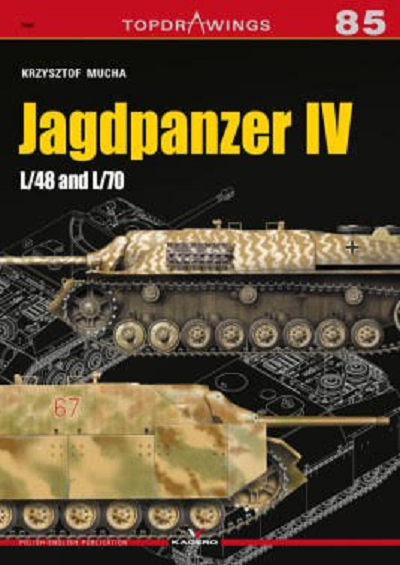 The Jagdpanzer IV, Sd.Kfz. 162, was a German tank destroyer based on the Panzer IV chassis and built in three main variants. As one of the casemate-style turretless Jagdpanzer (tank destroyer, literally "hunting tank") designs, it was developed against the wishes of Heinz Guderian, the inspector general of the Panzertruppen, as a replacement for the Sturmgeschütz III (StuG III). Guderian objected against the needless, in his eyes, diversion of resources from Panzer IV tank production, as the Sturmgeschütz III was still more than adequate for its role.

It comes in a clear self-sealing cello bag.

The cover art shows a color side view of a Jagdpanzer IV L/70 (V) that was captured by the Red Army, probably during the struggle for Pommem in  February 1945. The vehicle has non-standard winter camouflage of medium green with a white no. 69 that was added later by the Soviets. This appears again on top of the rear cover.

Below it is another color side view of a Jagdpanzer IV L/48 of SS Panzerjager-Abteilung 3, 3rd SS Panzer Division “Totenkopf”, Poland, November 1944. It is in a base of light sand, with red-brown and dark green wave pattern and the red number 67 outlined in white on its sides. This profile is repeated in the book.

Both side views are posed atop a jet black background that has 2 white line drawings showing the top of a Jagdpanzer IV.

There are 8 color side view profiles (including the 2 on the back cover).

This is one neat book. It will be of great interest to modelers that are planning a build of a Jagdpanzer IV, and also of interest to armor historians.

I want to thank Casemate Publishers for this review sample and the folks at Kagero. Casemate is the North American distributor of Kagero books and all their titles can be viewed on Casemate’s website at:
www.casematepublishers.com