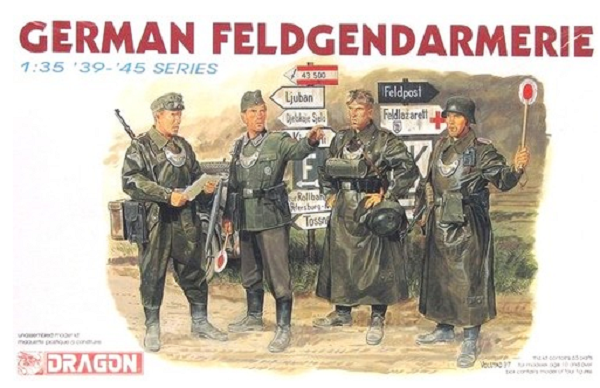 The Feldgendarmerie (German: this soundlisten), "field gendarmerie") were a type of military police units of the armies of the Kingdom of Saxony (from 1810), the German Empire and Nazi Germany until the conclusion of World War II in Europe.

This kit comes in a shrink-wrapped end-opening type box. I am no fan of this type of box, because invariably parts or the decal sheet will find their way past one of the end flaps to become lost forever.

The box art shows 4 Feldgendarmerie men standing on a road in front of 2 road signs and a motorcycle with side car behind them.

They all wear field-grey uniforms.

Reading left to right, the first man wears a pair of leather overalls over black jack boots, a cloth side cap with a pair of goggles strung over it, a map case on his belt and a 98K carbine strung over his back.

He has the Feldgendarmerie Gorget, which is a bright steel badge hung on a chain against his chest. He is holding some paperwork.

The 2nd man is wearing a field jacket and pants over black jack boots. He has a map case also on his belt, the Gorget around his neck, an award metal on his breast pocket, a soft cloth side cap, a pistol holster on his belt.

The belt has a bright steel buckle. He is pointing with his left arm and holds a traffic baton in his right hand. The baton has a wood handle with a white circle on the end of it that has a red center.

The 3rd man wears a long leather motorcyclist's coat with a black belt with a bright steel buckle and black jack boots. He has the Gorget around his neck also along with a gas mask canister. He is bare headed with a pair of goggles strung around his forehead. He has his hands on his hips and a steel helmet strung over his left arm.

The 4th man also wears a long leather motorcyclist's coat and black jack boots. He has a pair of leather gloves tucked into his belt. He wears a steel helmet. His right hand holds a MP40 sub-machine gun and a canvas ammo case for it on his belt. He wears the Gorget around his neck and is holding a traffic baton up with his left arm.

The motorcycle in the background is barely visible. It appears to be sand yellow and you can only see a equipment bag and the spare tire on the side car.

The road signs have numerous signs on them and these are all included in the kit. I believe that the signs are designed for Eastern Front dioramas.

These are followed by a bar code for this kit and kit not suitable for children under 3 years of age because of sharp parts. It is intended for modelers 10 and older.

Italeri is the kit importer of DML for Europe and their street address in Italy is provided.

​The other side panel says the kit contains parts for 4 figures, paint and glue are not included. In Japanese, German, French, Italian and Chinese.

Each language labeled with a color illustration of the flag of the country that speaks those languages. The copyright of 1997 and DML's street address in Hong Kong, China.

​The bottom of the box serves as the marking and assembly guide.

It shows a front and back view of each of the four figures. Over line drawings of the traffic baton, motorcyclist's gloves and long coat.

All illustrations are done by DML's resident artist Ronald Volstad. 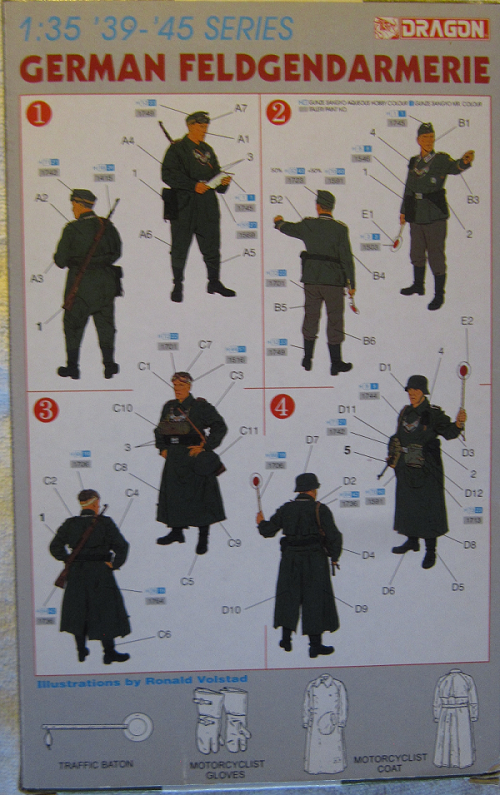 The kit contains 3 light grey parts trees in 3 sealed clear cello bags and a sheet of the words on the road signs, to cut out with a scissors and glued to the signs. 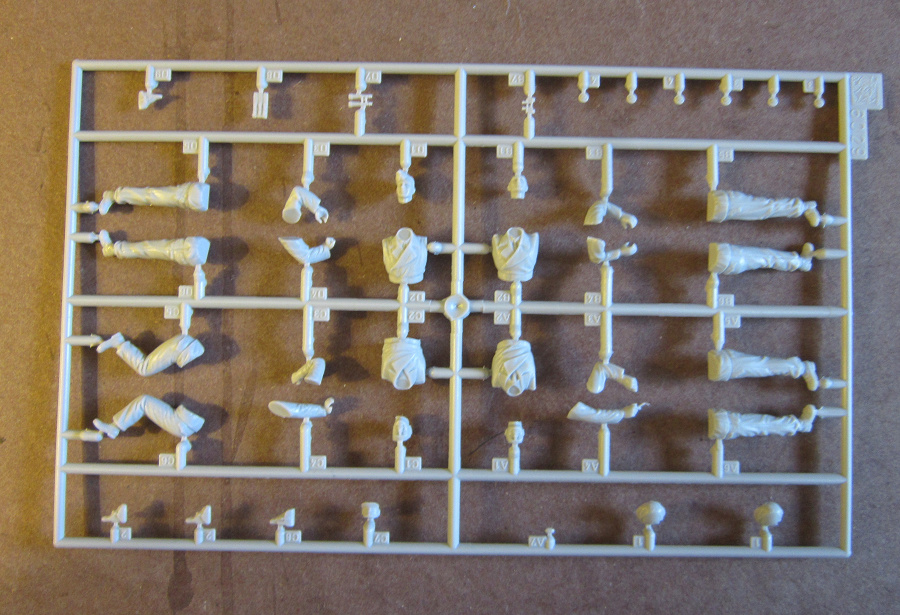 The figures are in sections labeled A thru D on this tree. Parts all have part number tabs next to them on the trees.

Figures are all divided into separate heads, torso, legs and arms. The long motorcyclist's coats are in sections. 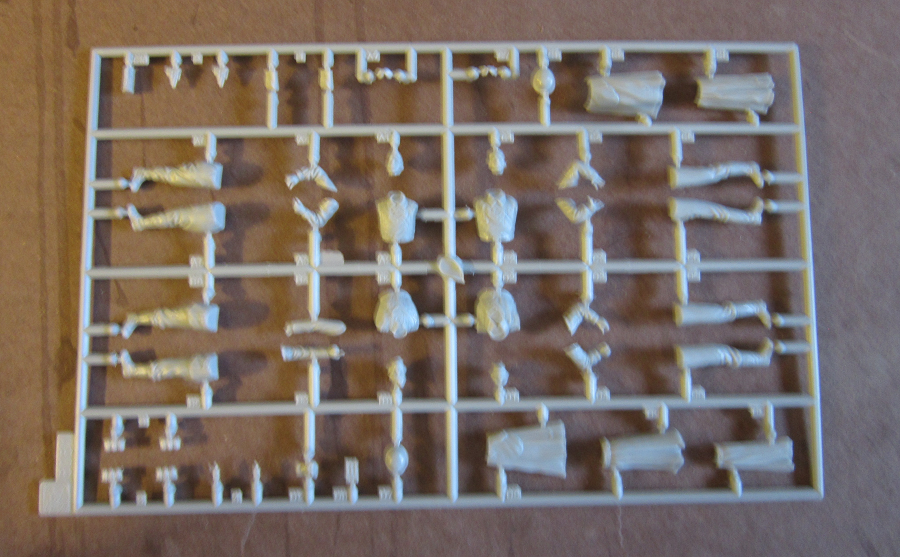 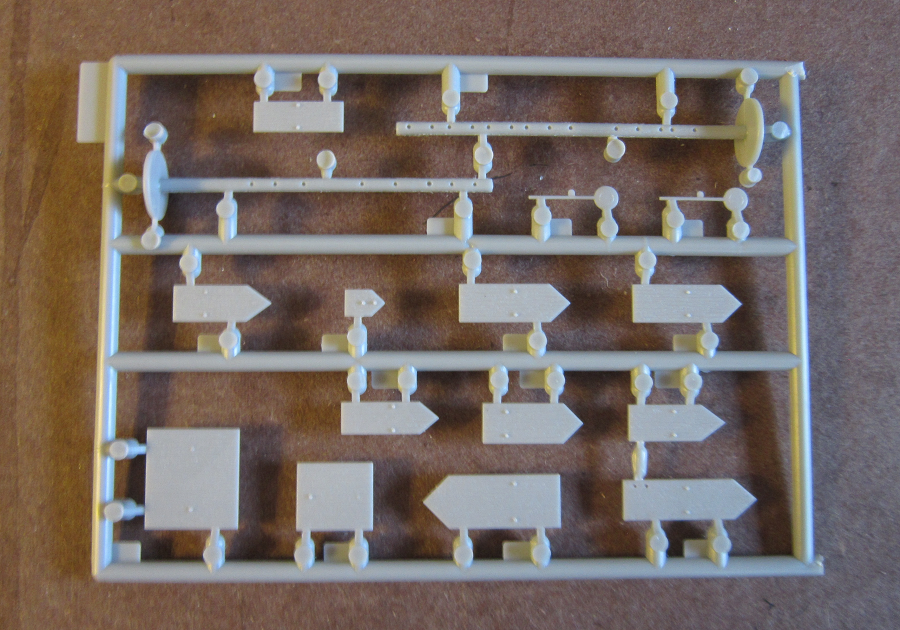 With the kit comes paper road signs and instructions to apply them to the plastic road signs. 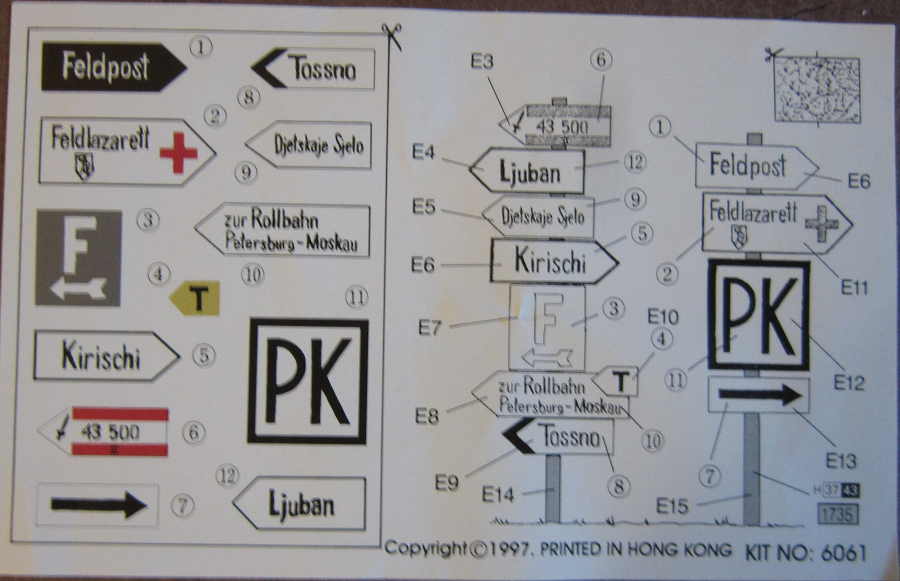 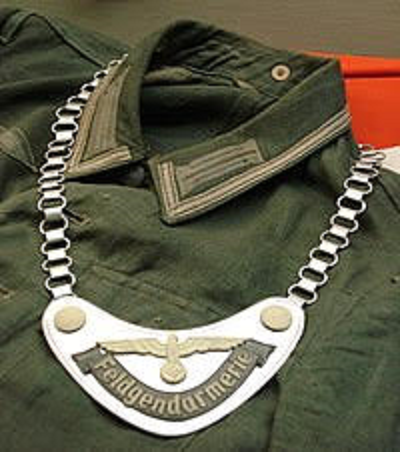 ​This kit will make up into a neat diorama. Only have to add that motorcycle with side car.
Highly recommended.