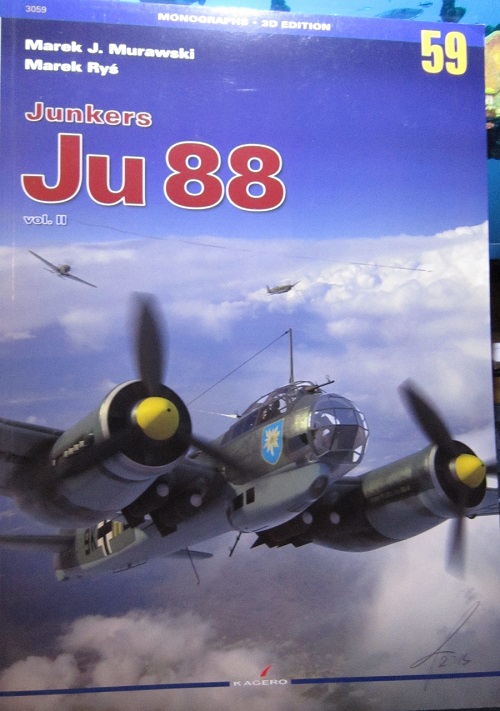 The Junkers Ju 88 was a German World War II Luftwaffe twin-engine multirole combat aircraft. Designed by Junkers Flugzeug- und Motorenwerke (JFM) in the mid-1930s to be a so-called Schnellbomber ("fast bomber") which would be too fast for any of the fighters of its era to intercept, it suffered from a number of technical problems during the later stages of its development and early operational roles, but became one of the most versatile combat aircraft of the war. Like a number of other Luftwaffe bombers, it was used successfully as a bomber, dive bomber, night fighter, torpedo bomber, reconnaissance aircraft, heavy fighter and even, during the closing stages of the conflict in Europe, as a flying bomb.[2]

Despite its protracted development, the aircraft became one of the Luftwaffe's most important assets. The assembly line ran constantly from 1936 to 1945, and more than 16,000 Ju 88s were built in dozens of variants,[3] more than any other twin-engine German aircraft of the period. Throughout the production, the basic structure of the aircraft remained unchanged

The cover art shows a Ju-88 being chased by a couple of Allied fighters above the clouds. The Ju-88 is in a camouflage of two shades of green with a blue underside. It has a squadron logo on the side of the nose that is a blue shield outlined in Yellow with a yellow Edelweiss flower on it The propeller spinners are yellow. What can be seen of the fuselage code is black 9k + and a yellow H.

Inside the book are 95 black and white wartime photos.

This book comes with a pair of hand held glasses with one red lens and one blue one. These are to look through to see pages in the book that are done as 3-dimensional.

There are 99 3D views of parts of the Ju-88’s components. Some show various angles of things. Things illustrated are:

Views of the ammo magazines for the MG 15.

The complete instrument panel including the Revi 12C/d gun sight.

The compass and a flash light on the instrument panel.

The locking bracket on the barrel of the forward MG 15.

The wiring below the instrument panel.

The instrument panel in a production Ju-88A-1.

The control colume with yokes.

A illustration of a Ju-88A-1 fuselage up on scaffolding for maintenance, with walk-around illustrations of it’s anatomy. Two illustrations from this group adorn the back cover of the book.

The last 2 pages of the book are a virtual catalog showing the color cover arts of other books that Kagero publishes. They include ones on aircraft, armor and ships, with some of them done in 3D.

These can be seen on the Casemate Publishing web site.

Highly recommended to both modelers and aviation historians.
I want to sincerely thank Casemate and Kagero for these review samples.