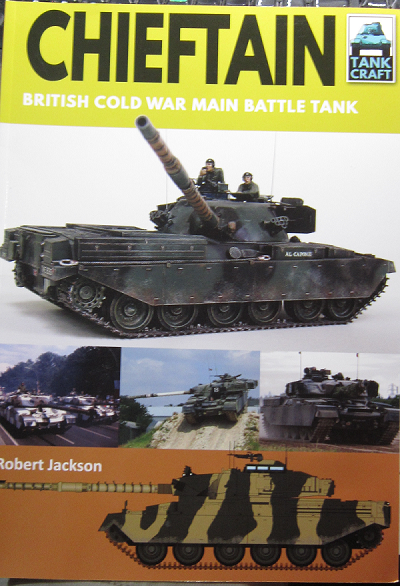 The British Chieftain, designed in the late 1960's as the replacement for the Centurion, was perhaps the best main battle tank in service with NATO during the 1960's and 1970's.

Its 120 mm rifled main gun and advanced armor made it one of the most formidable tanks of its time, and Robert Jackson's book is an authoritative introduction to it.

Although it was intended to fight Soviet armor on the plains of Germany, it was in the heat and sand of the Middle East that the Chieftain fought its major battles during the Gulf War of 1991. It was Britain's first line of armored defense during the critical years of the Cold War. It fought in the Iran-Iraq War.

It combined the firepower of a 120 mm gun with high mobility.

Variants of the Chieftain were exported to Iran, Oman, India, Kenya and Nigeria, and its chassis was adapted to fulfill a variety of tasks, including armored recovery and bridge-laying.

As well as tracing the history of the Chieftain, Robert Jackson's work provides an excellent source of reference for the modeler, providing details of available kits and photos of award-winning models, together with artworks showing the color schemes applied to these tanks.

The cover art shows a model of the Chieftain in overall dark green above 3 color photos of actual Chieftains and a color side profile of one.

Each section of the book is supported by a wealth of archive photos.
There are 84 color photos in the book and 5 black and white ones.
Included also are 2 color side view illustrations and 8 4-views.

In the section about available models there is a Tamiya 1/35th scale Chieftain Mk. 5 showing 14 color walk-around type photos of the model made up.

Cromwell models makes 1/72nd scale models of the Mk.2, Mk. 4, Mk.11, Burlington MBT, two GBT's, a Marksman and a Mk. 10. Shown are 10 color photos of some of these models made up, but it is not said which ones they are. Also 22  photos are shown of parts in these kits. Again, no mention of what kits.

Robert Jackson is the author of over eighty books on military, aviation, naval and scientific subjects. He was defense and science correspondent for a major British newspaper publishing group.

Among the other books he has compiled for Pen & Sword are "Bf-109" in the Flight Craft series and for Tank Craft he has written extensively on the T-34, the Panzer I and II, the Centurion and Chieftain Main Battle Tanks as well as the Russian T-54/55.

I want to sincerely thank Casemate Publishers who sent me this sample.
Casemate is the N. American distributor of Pen & Sword Military books and all their titles can be seen on Casemate's web site at:
​
www.casematepublishers.com