Over the weekend I received my much anticipated copy of Mig Productions first how-to DVD titled F.A.Q.: The Pigments. Quoting the manufacturer’s website, this DVD “explains all of the products and techniques associated with the usage of Pigments. This educational DVD will answer all of those questions modellers currently contain about this revolutionary and rather new finishing medium.” I also own a copy of Mig Jimenez’s earlier book F.A.Q.: Frequently Asked Questions on AFV Painting Techniques so I was very curious to see if this incarnation of F.A.Q. had anything to offer beyond the book. While the scope of this DVD only covers the use of pigments (a whole series of DVDs in in the works), I was pleasantly surprised. But more on that in a moment.

The DVD comes packaged in a clear plastic case with a brochure that lists Mig Productions pigment related products and brief tips on their uses. The case cover art is actually double sided. The inside of the case shows a top view of the finished Panzer IV used in several of the techniques on the DVD - I thought it was a nice touch to have a high resolution image of the finished tank.

A word about the DVD itself - it uses PAL region encoding which means that many of us in North America will only be able to watch it on a personal computer’s DVD player (these are region-free). For some of us though, the modeling room is the kitchen table or a tray in front of the TV. Not being able to watch this on a television might be a disappointment for some. I assume the choice of PAL encoding was made to keep production costs low, but I would be willing to pay a few extra dollars to have a version that played on both my PC and TV DVD players. With that complaint aside, I’ll say that once I started watching the DVD I quickly forgot about this minor inconvenience.

What's on the DVD

After a quick copyright warning, the disc begins rolling the intro credits. These are superimposed over about a minute of archival film showing German and Russian AFVs in action. The footage is well chosen and is an excellent way to get the inspirational juices flowing. I particularly liked the dramatic music playing during the intro.

In addition to the 12 sections listed above, the pigments DVD has 2 “bonus” sections; a second non-narrated demonstration of rust application that runs during the credits, and a “bloopers” section starring Adam Wilder and a shovel. 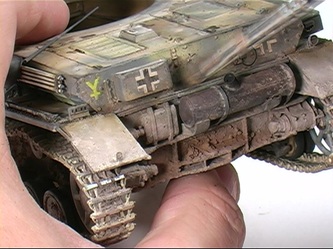 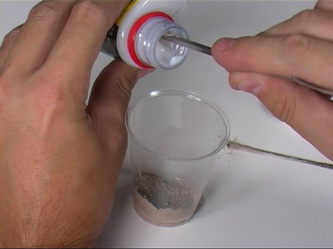 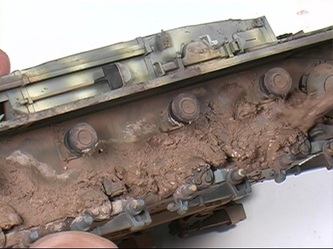 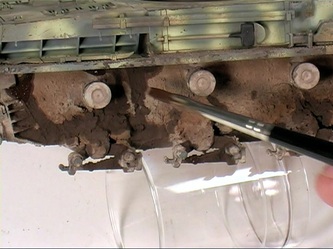 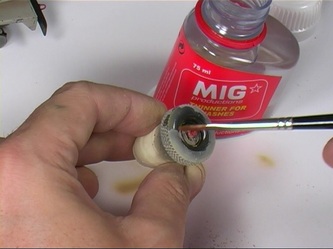 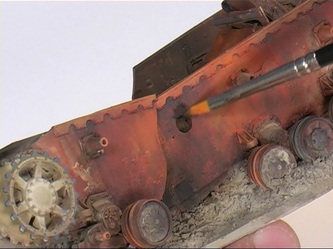 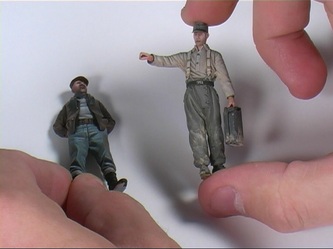 I must admit that prior to watching the DVD I had some skepticism regarding how well a video camera could capture modeling techniques. With normal cameras you can easily adjust exposure times to compensate for insufficient light when photographing small objects. Video cameras don't have this luxury as they have to capture dozens of frames per second to get smooth video playback. Besides this, DVDs also have a lower resolution (768x576 in the case of PAL encoding). Much to my surprise, I found the DVD video quality to be excellent. If you've been looking at the images for this review, you can judge for yourself; these screen grabs are 1:1 resolution (converted from png to jpeg for bandwidth reasons). The DVD actually has slightly better image quality than the screen grabs. Most importantly, the camera man did a great job getting up close and personal. The screen grabs show to good effect what you actually see in each demonstration.

As you can see by the sections listed above, this is a fairly exhaustive look at weathering. What I particularly like about the DVD (compared to the F.A.Q. book) is the demos that use the Panzer IV. Whereas the book used several different models to demonstrate a variety of techniques, the DVD focuses on a single model when possible, giving a much better sense of the bigger picture. In this way you can see what the model looks like at each stage of the weathering process.

As for the quality of the demonstrations themselves, it's what you would expect from Mig and Adam; the techniques are expertly demonstrated and Adam's narration augments Mig's demos quite nicely. If you're wondering how much pigment to use for a given effect, what the water/plaster/resin ratio is for a mud mixture, or how to move the brush when stippling mud, you'll get all of this (and more) on the DVD. Seeing the techniques in action is where this DVD really surpasses the book.

Even if you already own the F.A.Q. book, the DVD still has a lot to offer. While the book does cover a much wider variety of finishing techniques, in my opinion video is a better vehicle to demonstrate techniques that are often hard to grasp from a few captioned images. If you don't own the book and want the best possible explanation of weathering with pigments, what are you waiting for?