This kit's copyright date is 1987
HISTORY:

John F. Kennedy, Lt. (jg) USNR, signed the first entry in the log of PT-109,at 0800 hours. At that time, the boat was moored in Sesape, a Chinese trading village on the island of Tulagi in the Solomons. She looked aged, scarred, and battle-seasoned after seven months of combat.

PT-109 was just over 80 feet in length, nearly 21 feet through the beam and displaced thirty-three tons.

She was powered by three twelve-cylinder Packard engines, and was equipped with four torpedo tubes, machine guns and an anti-aircraft gun.

Built by the Elco Naval Division of the Electric Boat Company in Bayonne, NJ, she was lowered into Newark Bay in July 1942, without ceremony or christening, and two months later her baptism under fire took place in the Guadalcanal war area.

Then early in July, the boat was ordered to Rendova Harbor. After her arrival, reports were received that four Japanese destroyers were headed for Vila on the nearby island of Kolombangara with soldiers and supplies to reinforce the enemy occupying the Munda airstrip on New Georgia.

All the PT's were alerted for action when this move became known, and on the first of August, late in the afternoon, all the forest-green camouflaged boats moved out into the harbor.

They cruised for hours, neither able to see or detect anything with certainty. Radar was then in its infancy, and the few boats equipped with it were not much better off than those without it.

The first Japanese boat sighted was attacked by PT-159, which had the misfortune to have a torpedo tube fail and catch fire. This blaze attracted the Japanese and sent the 159 scurrying for cover, unharmed.

Attacks by other PT boats failed and the Japanese arrived at their destination without further incident. They deposited their cargo and began the return trip less then an hour later.

Three PT boats, the 162, 169 and 109, were quietly idling in the darkness, listening and waiting. Suddenly, virtually without warning, the bow of a speeding ship bore down upon PT-109 slicing her hull and cutting her in half, as though with a mammoth knife.

There was no time to alter course. Except for two of her crew asleep below, who were probably killed instantly, all were thrown into the flaming gasoline-covered water.

Fortunately, the bow remained afloat and the men were able to return to it. Only one among them was injured, and he was badly burned.

With daybreak came the hope of recovery and the fear of discovery; recovery by friends or discovery by the enemy. As the hours passed, a pressing need to seek cover prompted Lt. Kennedy to propose a plan for abandoning ship to reach nearby "Plum Pudding" or Kasolo Island.

"Plum Pudding", so-called because of its shape, was decided upon because it was small and appeared less likely to have a Japanese outpost.

Kennedy organized the crewmen for their swim to shore, and placed one man in charge. This freed him to give all his attention to the injured man,.

All others swam  while holding onto a plank removed from the wreckage which prevented their separation.

Lt. Kennedy lowered the injured crewman into the water, gripped his teeth to a strap on the man's life-jacket, and swam three and a half miles from the wreck to the island.

Despite his added burden, he arrived before the others. It required four hours to cover the distance, and all were greatly relieved to find the island unoccupied.
Following a period of anxious waiting, the men were discovered by friendly natives who communicated their whereabouts to Rendova, the home base.

Rescue came, and eleven men were saved, one to become President of the United States - John F Kennedy.
​THE KIT:

Revell is an old prolific model company based in Morton Grove, IL at the time of this kit's release. They manufacture all manner of model subjects in the popular scales and have facilities in Germany.

This kit came in a long blousey shrink-wrapped tray and lid type box. It is a whopping 6 1/2" too long with a huge void.

The box art shows PT boats 109 and 117 releasing torpedoes at high speed past a Japanese ship. Perhaps the one that sliced PT-109 in two??

Both boats are olive-drab over light-grey hull bottoms. Their white serial numbers are on the sides of their hull noses and front and side of their control cabins. Crewmen are manning their machine guns.

One end of the box art has a small color photo of the model made up and a black and white wartime photo of Kennedy. The length of the model made up is 13 5/16".
​One side panel begins with a one-paragraph history of the PT-109, followed by a map of the islands that it operated near and kit features: 4 torpedo tubes, 2 twin 50 cal. machine-guns, 20 mm cannon, life raft.

Kit is intended for modelers ages 9 and up. To assemble this kit you need plastic model cement.

Colors recommended are light-grey, medium-blue and flat olive-drab. Paint and cement are not included. Copyright of the kit is 1987 and Revell's address in Des Plaines, IL at the time of this kit's release is provided. MADE IN USA.
WHAT'S IN THE BOX:

There are 5 dark-green trees, a loose dark-green hull and deck part, the decal sheet, instructions and 2 copies of a catalog request card.

The instructions consists of a single-sheet that is folded into 4 pages in 11" x 8 1/2" page format, folded again 3 times to fit the box.

Page 1 begins with a black and white repeat of the box art, over the history of the PT-109 and general instructions, Revell's guarantee, street address in Des Planes, IL and a 1-800 phone number to use for any help needed with the kit.
Page 2 through 4 give a grand total of 4 assembly steps.

Part trees are not alphabetized or illustrated in the instructions and have not part number tabs next to the parts on the trees.  Very bad move Revell!

This means a careful study of the parts in the assembly drawings to get the right parts needed for the assemblies.
​The first dark-green tree holds: ventilators, cabin sides and roof, figures, rudders, gun platforms railings, oxygen bottle etc. (24 parts) 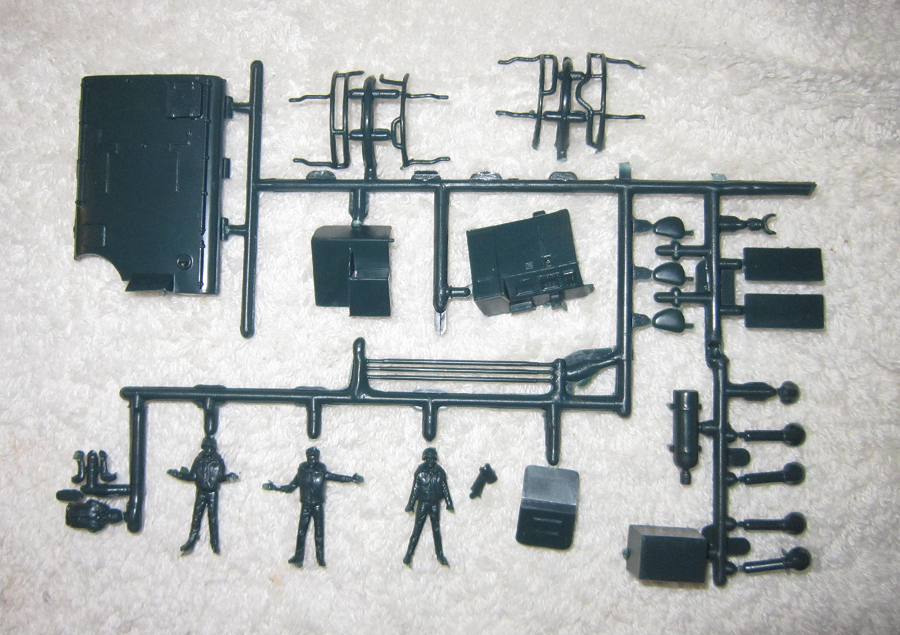 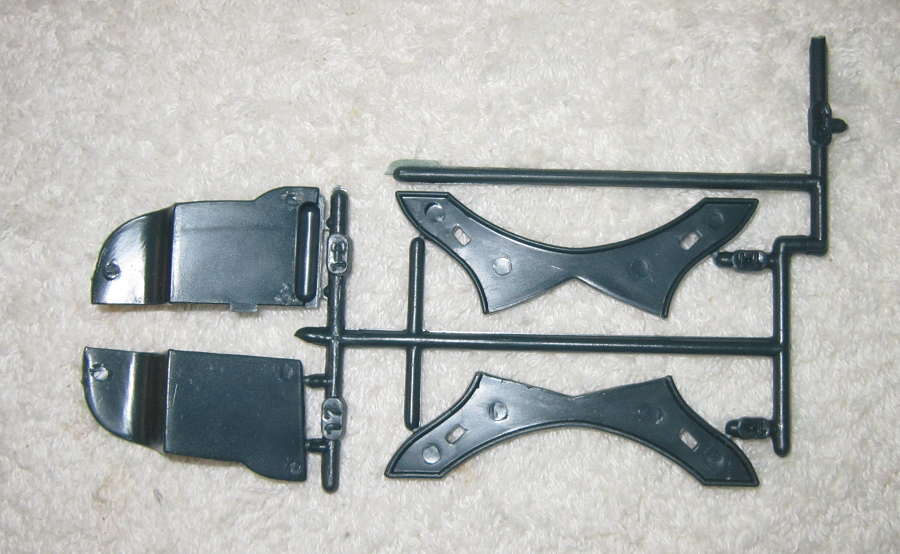 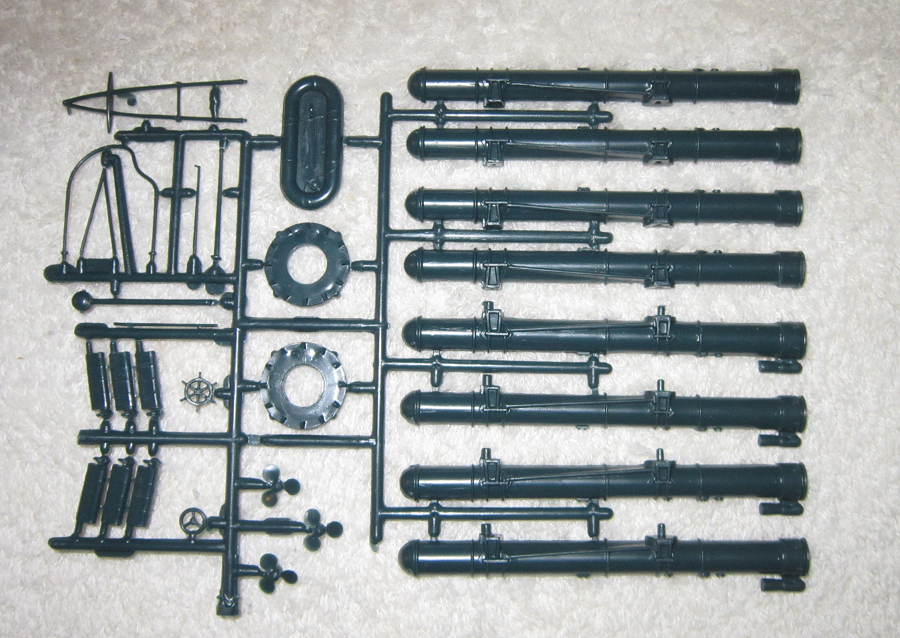 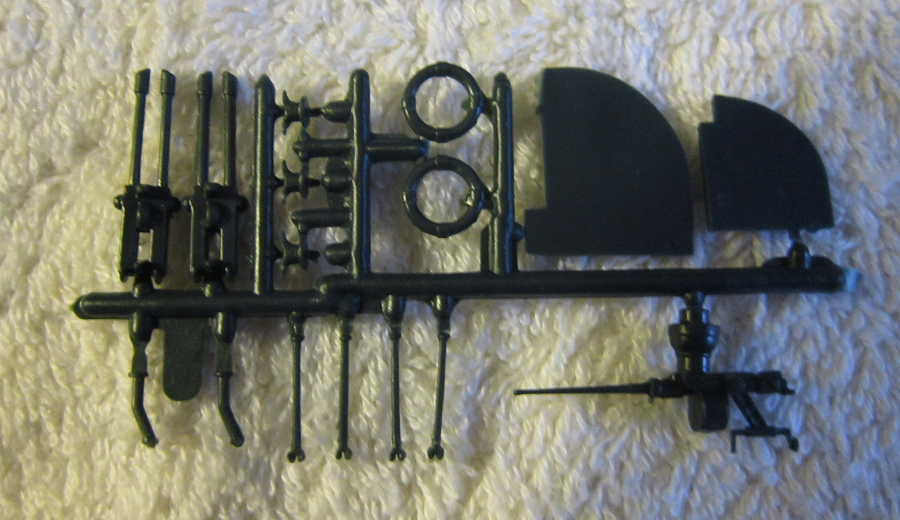 ​Next is the dark-green hull bottom and deck (2 parts) 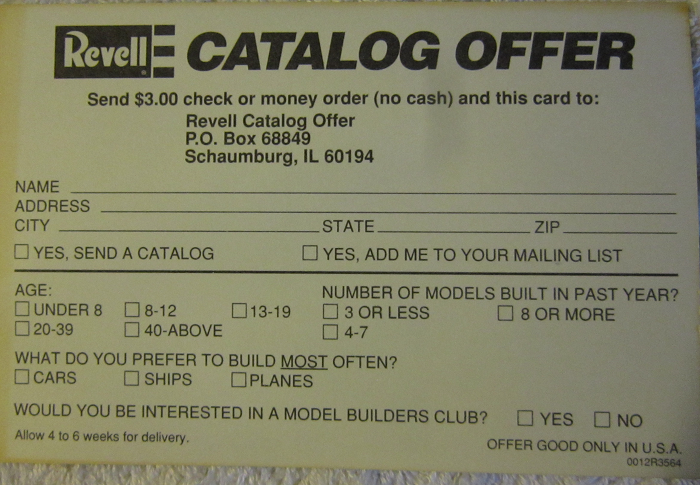 The kit has raised wood plank detail on the deck. Windows in the control cabin are molded in and no clear parts are included for these.