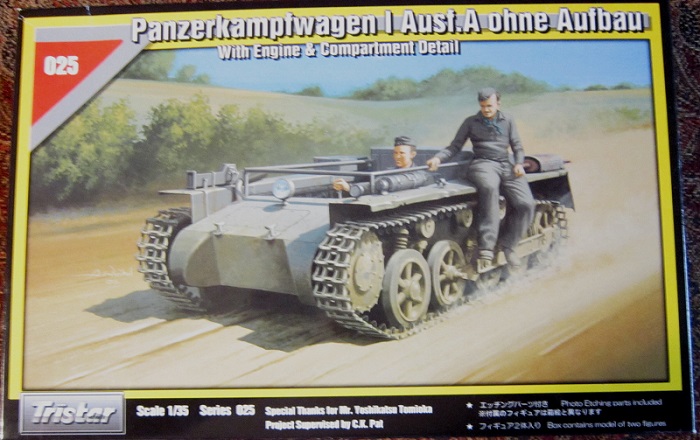 Prevented by the Treaty of Versailles from possessing  or manufacturing tanks or similarly designed armoured vehicles, Germany skirted the treaty restrictions by producing 15 tank hulls without superstructures, turrets or armament.

To spread production experience as far as possible, five companies had been selected in 1933 to produce three vehicles each. The official designation “Lanwirtschaftlicher Schlepper” helped disquise the fact that any type of tracked vehicle was being manufactured.

Designed as a training vehicle, the turretless Krupp Tractor was not intended for combat. In the Spring of 1934, it was issued to the first two Panzer regiments; Kraftfahrlehrkommando Zossen und Ohrdruf to give the troops their first experience of driving a fully-tracked armoured vehicle. Krupp-Gruson-Werk was awarded a contract to overhaul three 1.Serie/La,S chassis and convert them into training vehicles by adding a rail.

Tristar is a model company based in Hong Kong China.

This kit comes in shrink-wrapped tray and lid type box.

The box art shows a Pz.Kpfw. 1 Ausf. A training tank moving down a dirt road. Two crewmen are aboard. One is driving the vehicle and the other is sitting on the fender hanginging on to a railing. The tank is in overall panzer gray with no marks shown.  Special thanks is given to Mr. Yoshikatsu Tomioka for whatever reason is not said. The project was supervised by C.K. Pat.

It is said that PE parts are included and 2 crew figures.

One side panel gives the copyright date of 2006 over Tristar’s street address in Hong Kong, their FAX numbr, e-mail address and web site address. This is followed by a one paragraph history of the vehicle. A color side profile illustration is shown. It is in overall earth yellow with no markings.

The other side panel says it is a ready to assemble model kit and model skills will be helpful for modelers under 10 years of age. Model Rectifier Corp. is mentioned as the U.S. agent in Edison, N.J., followed by MADE IN CHINA.

Tristar’s street address in Hong Kong is repeated again along with their telephone and FAX numbers and e-mail address. This is followed by the street address of their office in Japan, the phone number and FAX number there, e-mail address and web address. Next to these are two color box arts of other AFV kits that Tristar markets. A German Pz.Kpfw. 38(t) Ausf. G, kit no. 35022 and a German Pz.Kpfw. IV Ausf. D “Tauch” wading tank, kit no. 35023.

The bottom of the box has 11 more black and white box arts of other AFV and figure kits that Tristar markets.

The kit contains 11 tan trees of parts in 8 sealed cello bags, a clear tree in a cello, a brass PE fret and the decal sheet in a cello backed with a stiff card to keep the PE from being bent.

The instructions complete the kit’s contents. It consists of a single sheet that accordion folds out into 8 pages in 8 ½” x 11” page format.

Page 1 of the instructions begins with a black and white repeat of the box art, followed by the history of the vehicle and READ BEFORE ASSEMBLY instructions in English and Chinese. Below these is Tristar’s 2 street addresses in Hong Kong and their Japanese office’s street address, phone number, FAX number, e-mail address and web site URL.

Page 3 through the top of page 8 give a grand total of 10 assembly steps. Step 10 is for assembly of the 2 figures. The bottom of page 8 has a 3 side view illustrations for tanks all of unknown units. One is overall panzer gray with a white NSKK-1 on its nose. The second one is multicolored (we are not told what colors) with just a cross on the nose. The third one appears to be panzer gray with no marks at all. 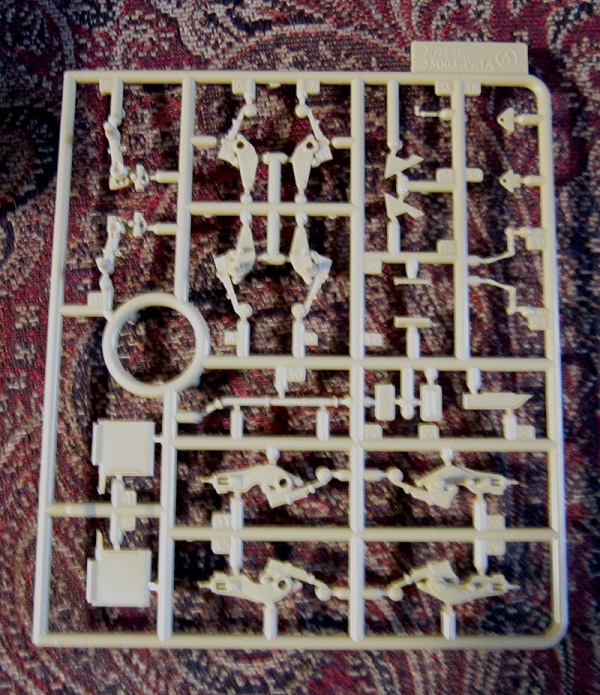 Tan letter B parts tree holds: the turret parts (which is strange, because this it is meant to be the turretless training version. I suppose one could assemble the turret on it. However, there are no assembly instructions included to do that. A person would have to WING it.) (26 parts). 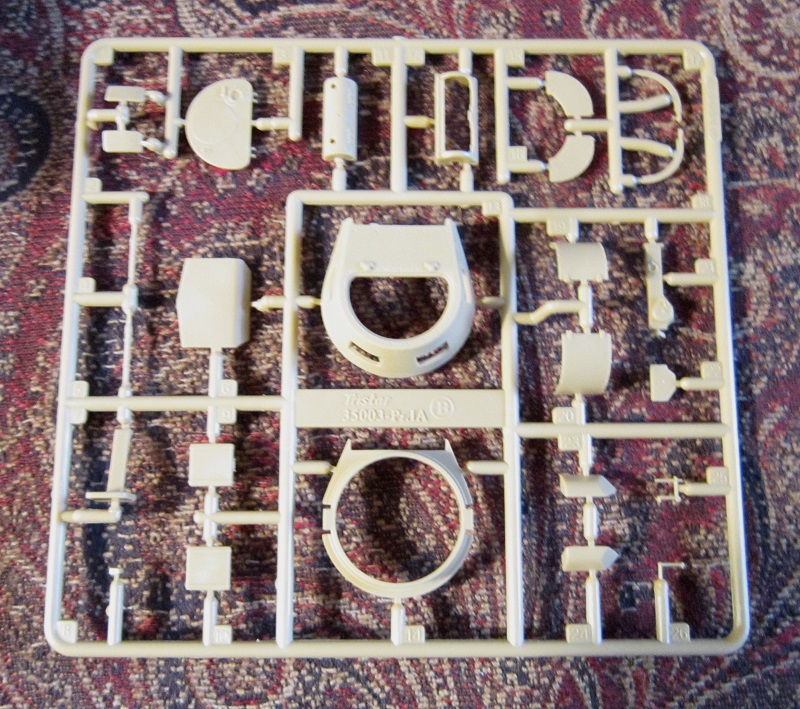 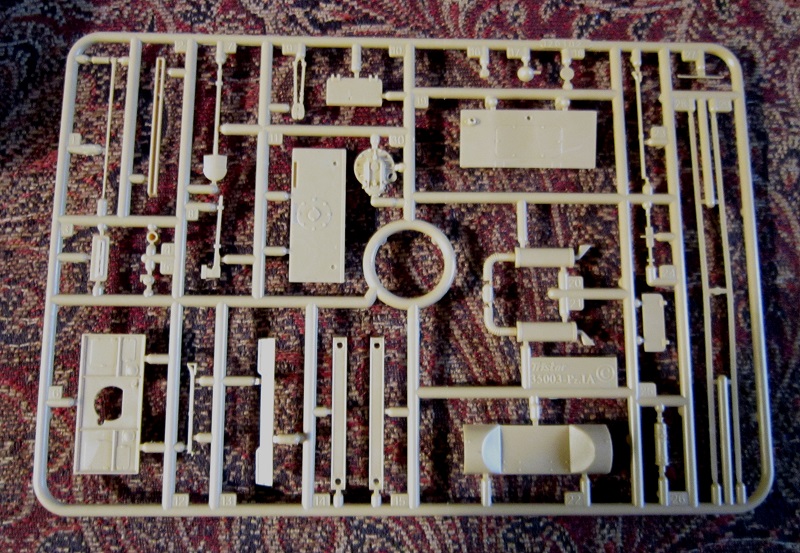 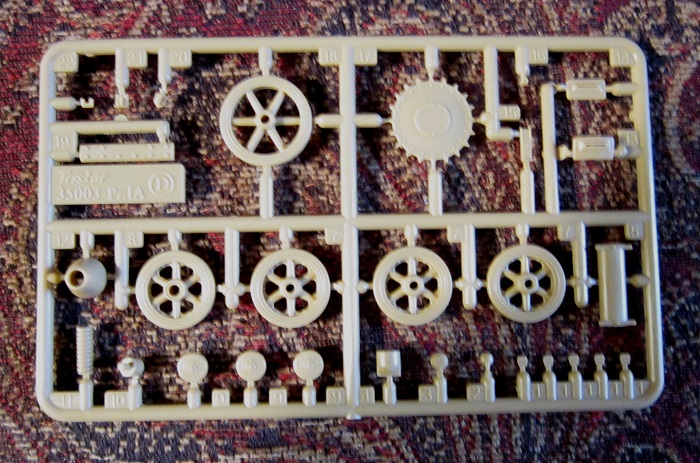 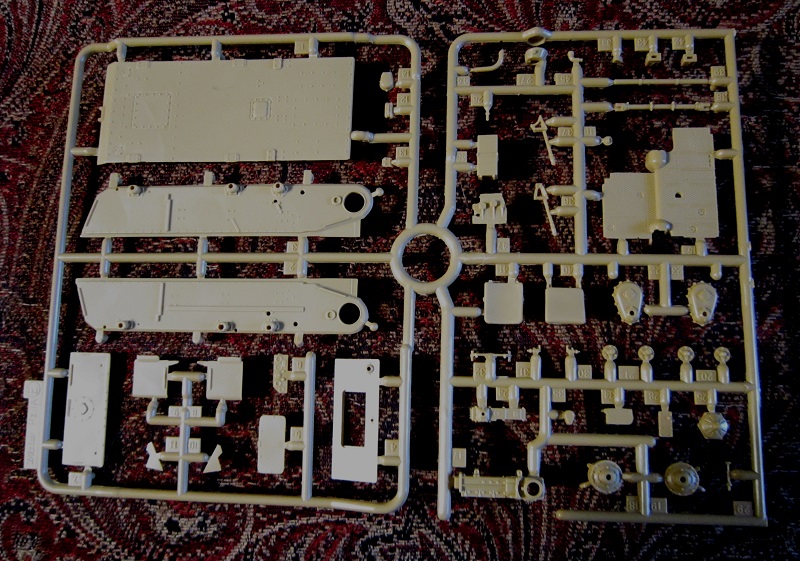 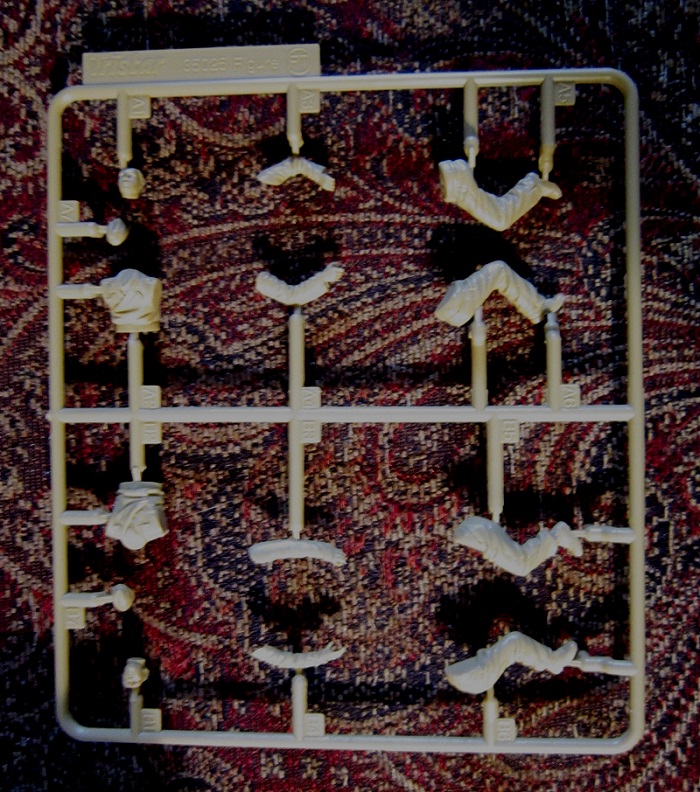 Tree letter GP is the clear parts for the headlight lenses etc. (5 parts) I think 3 of these parts are for vision windows in the turret).

There is no letter H parts tree. 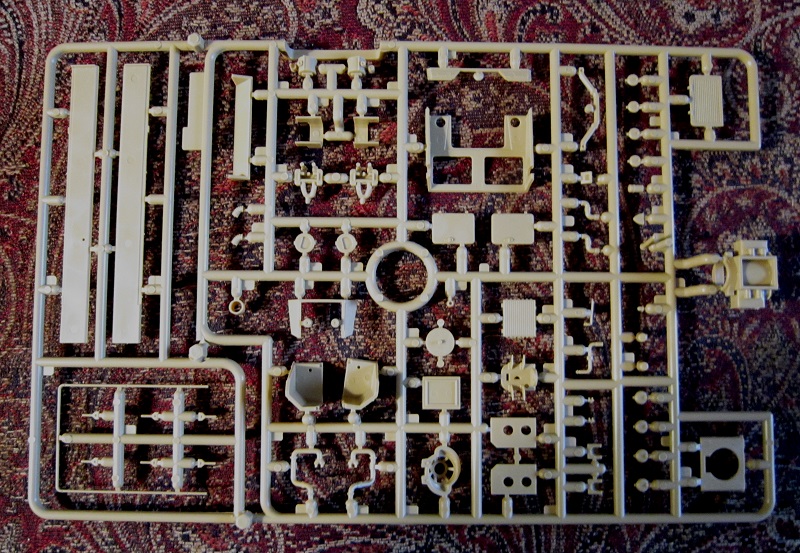 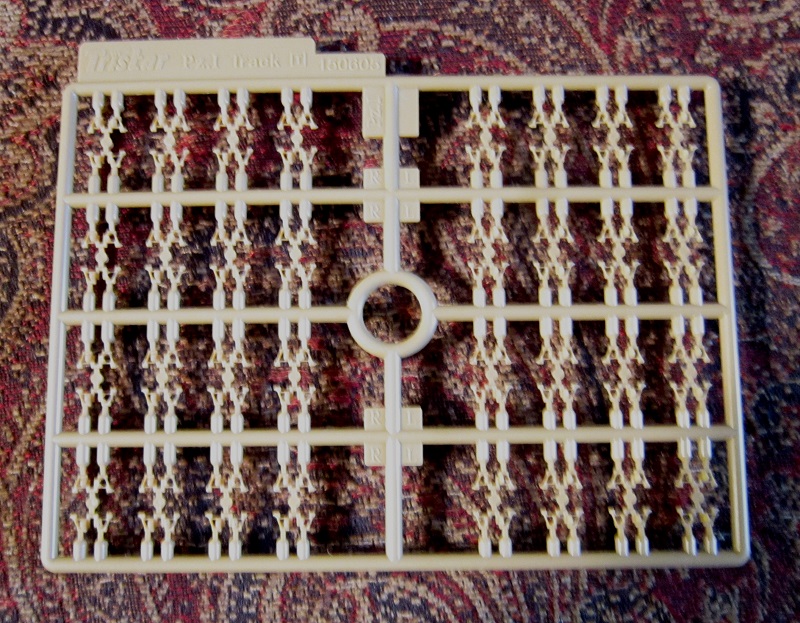 The brass PE fret is next. It holds the engine air intake screens and numerous small fittings (39 parts) 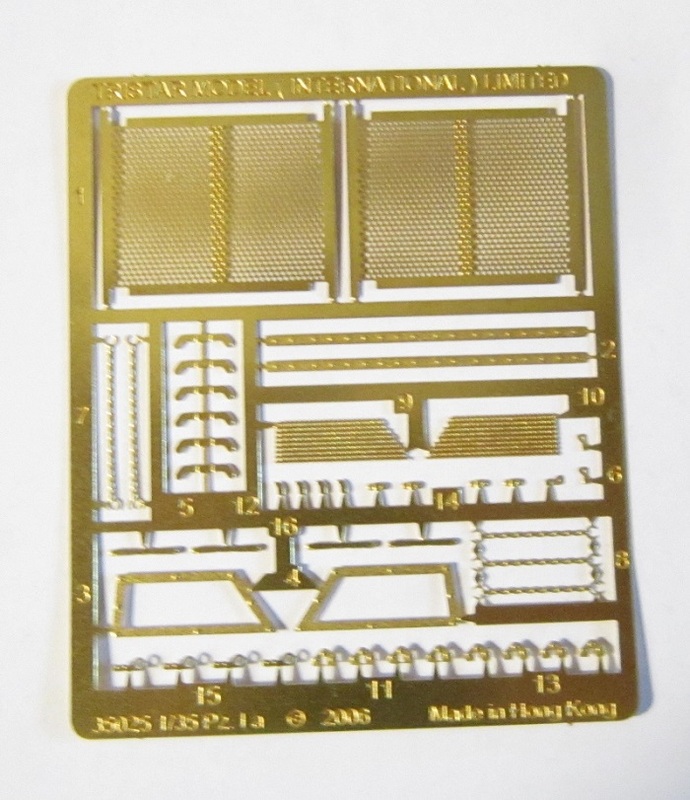 The decal sheet completes the kits contents. It holds small German crosses and some white lettering and dashboard instrument dials. 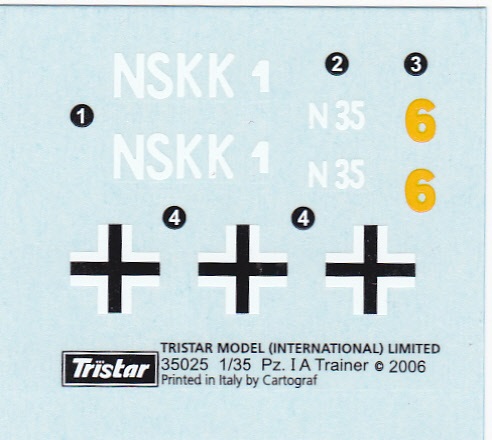 I recommend this kit only to modelers of advanced building skills, due to the complexity and parts count. The interior is very busy.

Strangely, it seems every time I purchase a Tristar kit…no matter where…the price is always discounted. Usually as much as 50%. This really puzzles me, but I ‘m not knocking bargains.