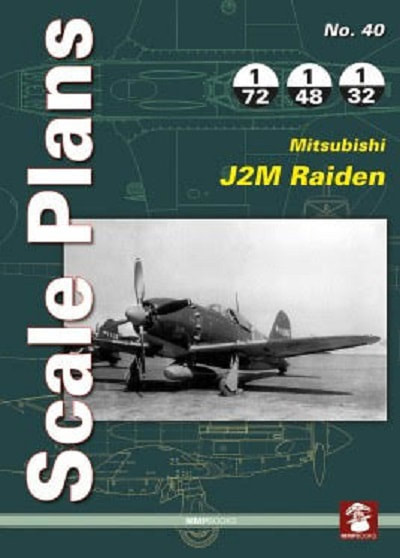 MSRP: $ 11.99
The Mitsubishi J2M Raiden ("Thunderbolt") was a single-engined land-based fighter aircraft used by the Imperial Japanese Navy Air Service in World War II. The Allied reporting name was "Jack".
The J2M was designed by Jiro Horikoshi, creator of the A6M Zero, to meet the 14-Shi (14th year of the Showa reign, or 1939) official specification. It was to be a strictly local-defense interceptor, intended to counter the threat of high-altitude bomber raids, and thus relied on speed, climb performance, and armament at the expense of manoeuvrability.

The J2M was a sleek, but stubby craft with its oversized Mitsubishi Kasei engine buried behind a long cowling, cooled by an intake fan and connected to the propeller with an extension shaft.
Teething development problems stemming from the Kasei engine cooling system, and the main undercarriage members led to a slowdown in production.A continual set of modifications resulted in new variants being introduced with the ultimate high-altitude variant, the J2M4 Model 34 flying for the first time in August 1944.

It had a 1,420 hp Kasei 23c engine equipped with a turbo supercharger (mounted in the side of the fuselage just behind the engine) that allowed the rated power to be maintained up to 9,100 m (29,900 ft). Two upward-aimed, oblique-firing (aimed at seventy degrees) 20 mm cannons, mounted in the German Schräge Musik style, were fitted behind the cockpit with the four wing cannons retained.

Unresolved difficulties with the turbo supercharger caused the project to be terminated after only two experimental J2M4s were built.

Mushroom Model Publications is a company based in the UK. They have all their books printed by their associate Stratus Publications in Sandomierz,Poland in the English language. Stratus also does their own line of books in both Polish and English.

This plan is one of a series of aircraft plans that MMP does.

The cover art shows a black and white photo of 2 Raiden's parked on a runway. The one in the foreground wears a belly fuel tank and has the code of a Japanese character followed by 1105 in light colored lettering on the sides of the rudder.

The second Raiden also has the same Japanese character followed by 1103 on the sides of its rudder.

This photo is on a dark green background that has a top and side yellow line drawing of what I believe is a Russian Yak-9. The back cover repeats the line drawings.

This set will be of great interest to modelers that have AMS (Advance Modelers Syndrome) and also to aviation historians.

I want to thank Roger Wallsgrove, Editor-in-Chief of MMP and the folks at Casemate Publishing that sent me this review sample. They are the North American distributor of MMP books and all the MMP titles can be seen on their web site at: