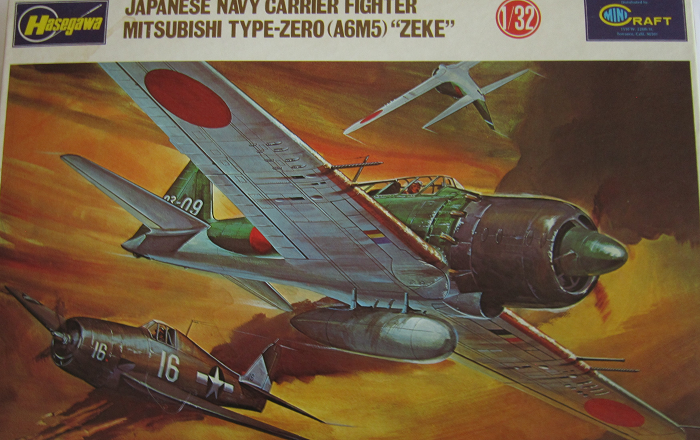 Throughout the history of aviation, certain aircraft have earned such a reputation that they became almost legendary. These planes represented a great advancement, either technical or tactical. Among these historical aircraft is the famous Mitsubishi A6M Zero-Sen fighter of WWII.

Though the Zero-Sen was one of the main support aircraft used in the attack on Pearl Harbor and was believed to be a new type, it was actually a veteran of more than a year on the Chinese mainland. The Zero-Sen had been designed around a concept which would produce the lightest possible airframe with a low wing loading.

This permitted a tight turning radius which would allow the Zero-Sen to turn inside the heavier fighters which were being built by America and her allies. This would give the Zero-Sen a decided tactical advantage in  dogfight. The light weight, coupled with a powerful engine, would provide the necessary speed advantage to allow the Zero-Sen pilot to break-off combat at will.

The entire design philosophy of the Zero-Sen was directed toward developing the lightest possible aircraft. Unfortunately, this led to the elimination of certain features which were to ultimately turn the tables on the Zero-Sen. No attempt was made to include such items as armor plating, to protect the pilot, self-sealing fuel tanks or fire protection. It was believed that the speed and maneuverability of the fighter would be sufficient protection.

In order to obtain the lightweight structure required by the design concept, the wing was built in one piece. The eliminated any heavy center-section fittings.

The fuselage-wing attachment points themselves were the smallest possible.  To facilitate ground transport and storage the fuselage was constructed in two sections. the airfoil used on the Zero-Sen was developed specifically for the fighter. It proved so successful that it was eventually adapted for use on the Mitsubishi G4M "Betty" torpedo bomber.

The first Zero-Sen climbed into the sky in July, 1939 and the second prototype flew two months later. Testing of the planes disclosed some parts of the structure which required strengthening. During the test program, two aircraft were lost due to wing-spar failure. The normal "bugs" were uncovered, the necessary corrective measures were taken and the Zero-Sen was place into quantity production.

The existance of the Zero-Sen came as a rude shock to American airmen who faced the agile fighter in battle. When it was first encountered in combat, the Zero-Sen appeared almost invincible. It was the first carrier-based fighter which could outperform its land-based contemporaries and its appearance in every major air battle gave the impression that great numbers of the Zero-Sen were in the ranks of the Japanese air arms.

For months, Allied intelligence groups attempted to piece together an example of the mysterious fighter from wreckage of downed planes. then in July 1942, an American scouting party discovered a Zero-Sen lying on its back in a marsh on the Aleutian Island of Aktan. The pilot had attempted an emergency landing on the island but did not realize the area he selected for landing was in reality a marsh. This fatal mistake was to provide  nearly perfect example of the fighter to the Allies for flight testing and evaluation.

Very soon, the mysteries surrounding the Zero-Sen were swept away. all its shortcomings were exposed to its opponents. However, as with all outstanding aircraft, the Zero-Sen was adaptable to new requirements and later production models were fitted with armor plate and self-sealing fuel tanks.

To compensate for the added weight, more powerful engines and air-frame refinements were incorporated into the fighter. But in spite of these improvements, the Zero-Sen was outclassed by newer Allied fighters as well as more advanced types entering the Japanese arsenal.

The A6M5 was (type 52) was the last major production version of this remarkable fighter.

Hasegawa Seisakusho Co. LTD. is based in Japan. This kit was imported and distributed by the Minicraft-Hasegawa offices in Torrance, CA.

The kit came in a large shrink-wrapped tray and lid type box.

The box art shows 2 Zero-Sens dog-fighting with a Hellcat.

The Zero-Sen in the foreground is in a pattern of dark-green over a light gray under-carriage. It has a white no. 03-09 on the rudder and yellow wing leading edges.

The second Zero-sen is banking away in the background and is inverted just showing its bottom. A yellow horizontal stripe can be seen across the rudder.

The Wildcat is dark blue above. The under-carriage cannot be seen. It has a blue bottom to the rudder diagonally with a black 16 on it. There is a white 16 on the sides of the nose and again under the cockpit.

Page 1 begins with a black and white photo of the model made up. It has a white spinner, dark-green fuselage over light gray under-carriage and a light colored no. reverse E D-1153 on the rudder sides.

Below this is the history of the Zero-Sen fighter and Minicraft-Hasegawa's street address in Torrance, CA.

Page 2 has the parts trees illustrations. Trees are not alphabetized nor have any part no. tabs next to the parts on them. Study of the illustrations will have to be constantly made to get the correct parts for assemblies. Bad move Hasegawa!

Page 1 through 4 give a grand total of 13 assembly steps.

Assembly no. 13 is for the 2 pilot figures. One is seated and the other is standing and holding a samaurai sword.

Page 7 has finishing tips on it.

Page 8 has a inky black and white photo of an actual Zero-Sen parked on a concrete runway in front of a hangar. It is dark green over light gray
under-carriage, with a light colored spinner and a Japanese character followed by 0-39 on the rudder sides.

Below it is 3 side profiles of schemes.

1. A A6M2 version that is dark-green (FS 34058) above ad light-gray under-carriage (FS 36492). It has one white horizontal stripe high on the rudder sides, a white spinner, black anti-glare panel in front of the windscreen and dark-brown propeller blades (FS 10075).

The bottom of page 8 has a very inky black and white photo of an actual Zero-Sen on a grass runway in front of a hangar. It is probably dark green on top. Bottom is not visible. There is a light color no. 43-188 on the side of the rudder. 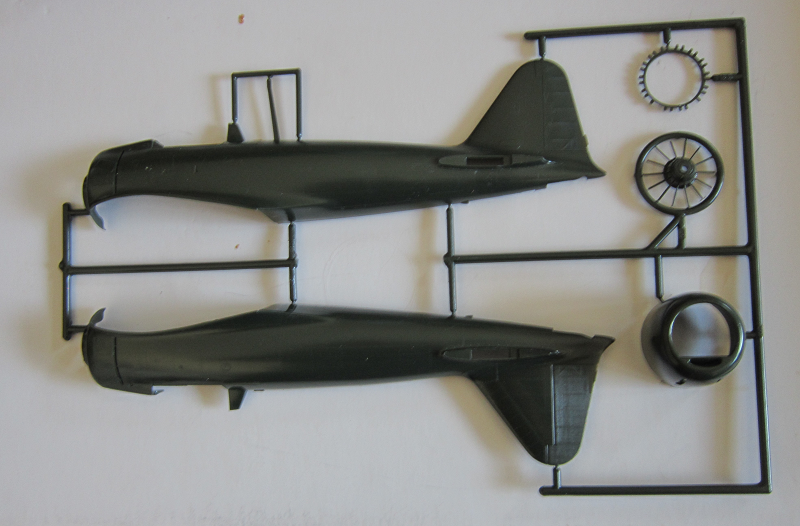 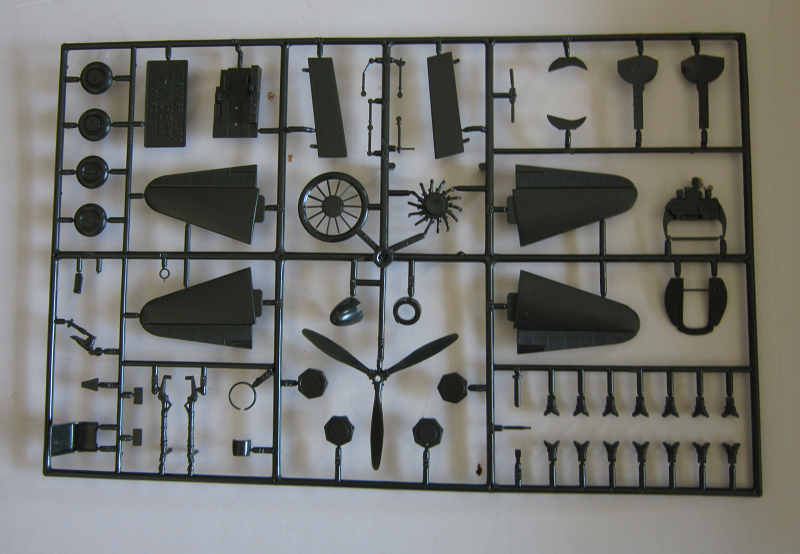 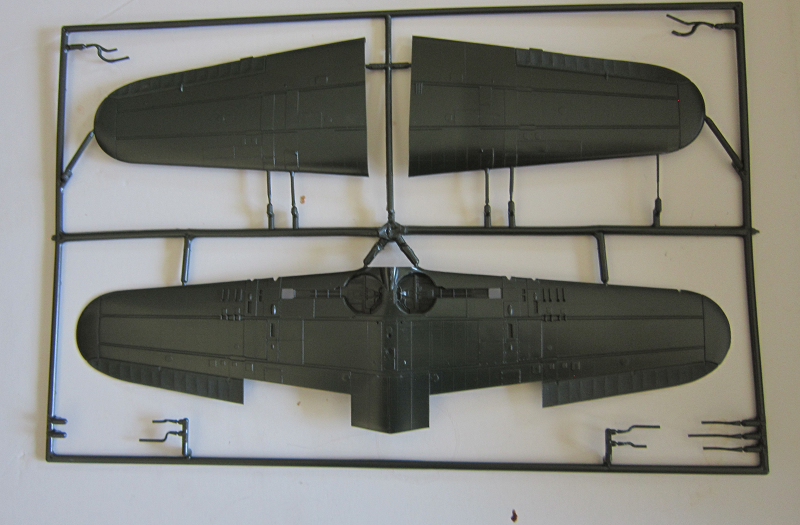 A few pieces from the third tree were loose in the box. 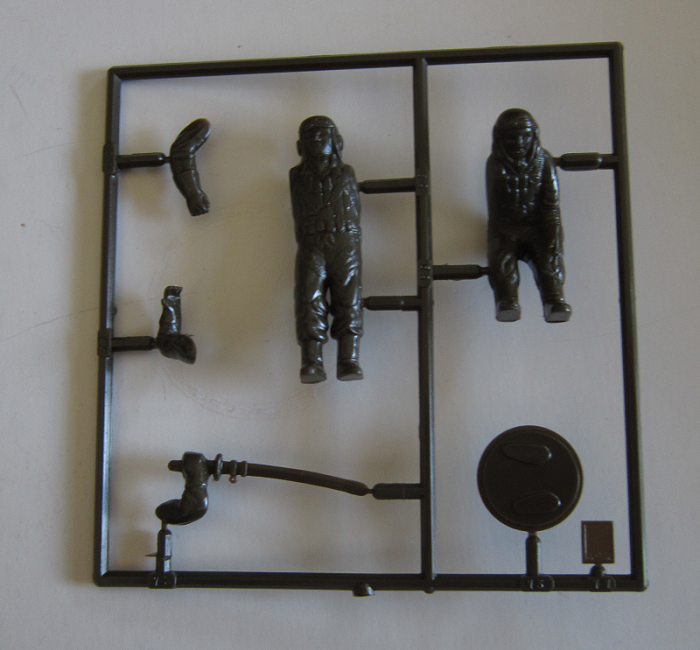 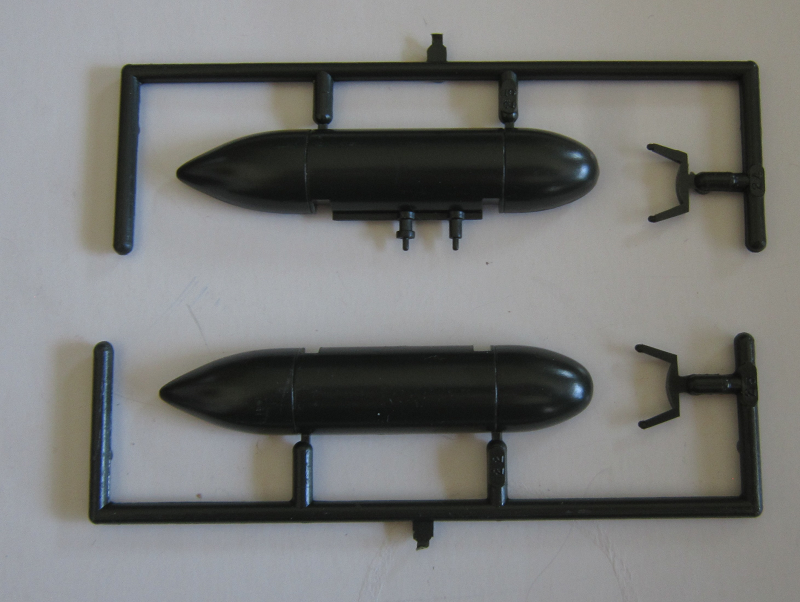 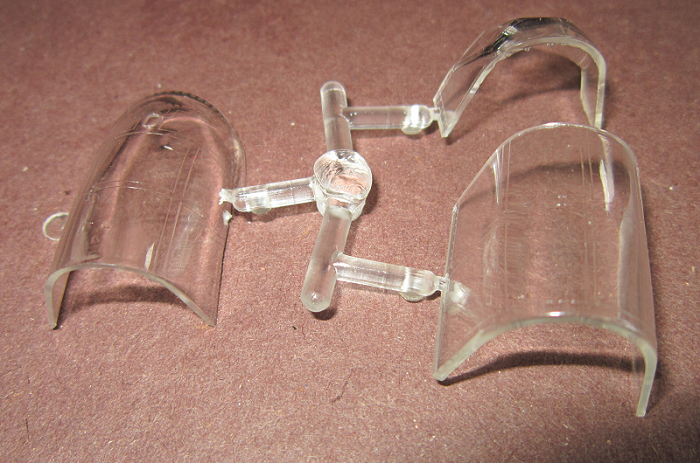 ​The large decal sheet completes the kit's contents. It contains many Japanese characters and numbers 1 through 10 in yellow or white, color strips that go on the landing gear pants, some manufacturers stencils, Chrysanthemum symbols (kill marks?) and a row of 6 victory markings over U.S. aircraft, the Japanese roundels and yellow strips to use on the leading edges of the wings.

​Too bad there aren't enough illustrations in the instructions as to how to use these markings or mention of what squadrons they were for.
​Otherwise highly recommended. Nicely detailed engine. Details are all raised and the flaps are all molded solid.