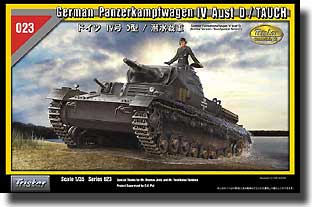 For “Operation Sealion”, the planned invasion of Britain, the Commander of the Army of Germany originally requested 180 underwater tanks. On August 1, 1940, there were 90 Panzer III tanks with 3.7cm KwK guns, 10 Panzer III’s with 5cm KwK’s and 48 Panzer IV’s in all ready for the four special Panzer units. After “Operation Sealion” was given up, the vehicles among Eutin, Pulos, Bremen and Hamburg were almost all assigned to the 18th Panzer Division.

The Tauchpanzer IV-D’s were converted for the underwater version. Additional sealing was provided for the engine-air-intakes, and the exhaust was fitted with non-return valves in place of the normal mufflers. The mantlet and MG housings were all covered with waterproof fabric. The driver’s visor was made watertight by a special metal cover with a visor block. An inflatable rubber tube was also used to seal the turret ring.

Tristar is a model company based in Hong Kong.

The kit comes in a tray and lid type box. The boxart shows a Pz.Kpfw. Ausf. D emerging from a river with a crewman standing in the turret hatch.

Inside the kit are 34 tan parts trees in 14 sealed cello bags, one clear parts tree in a sealed cello and a length of braded copper wire, 3 brass PE frets and 2 decal sheets in another sealed cello. A stiff sheet of cardboard protects the PE frets from bending and the decal sheets have tissue on the faces of them to prevent scratching. Excellent packaging!

A post card that is addressed to MRC is included that is more or less a survey asking about the purchaser’s hobby habits.

The instructions complete the kit’s contents. They consist of a single sheet that accordion folds out into 10 pages in 6 5/8” x 11” format. This contains 15 assembly steps.

The kit can be built as either a Tauch (underwater) tank or a regular version. The turret has good interior detail, but there is no interior detail included for inside the hull. No crew figures are provided either.

The bottom of page 9 and all of page 10 show 5 painting and marking schemes, all of which are overall panzer gray. These are shown as 4-view illustrations and are quite small.

Colors are called out in both the Tamiya and Mr. Color paints.

I recommend this kit to experienced modelers who have done a few kits of this complexity and part count before. It is not for the neophyte, nor is it a weekend project.

Kit is compliments of my wallet. 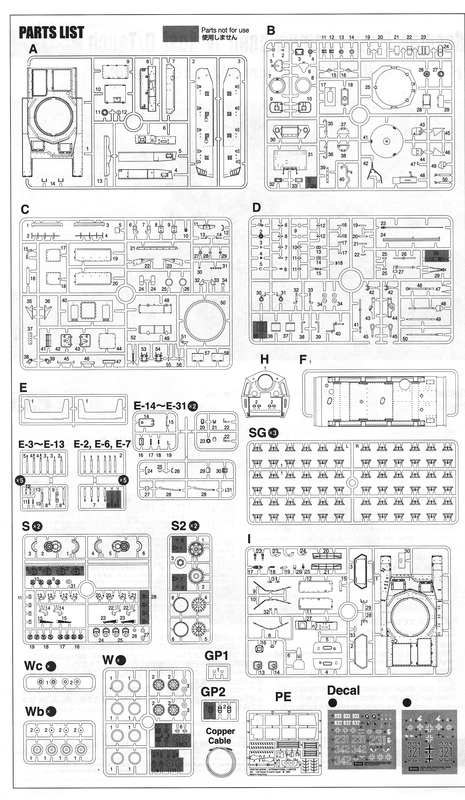