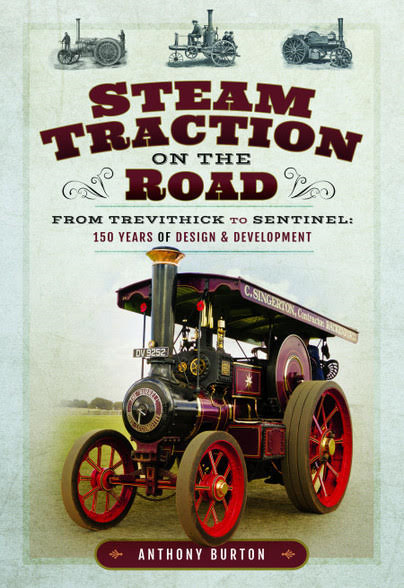 Book Review of Steam Traction on the Road
From Trevithick to Sentinel:150 Years of Design & Development
Author: Anthony Burton

MSRP: $49.95
​This is the story of how, for more than a hundred years, steam power played a vital role in the development of road transport.

That these attempts ultimately failed was largely due to opposition by road authorities and draconian legislation. Steam power did, however, find a real purpose in agriculture, where the traction engine was used for a variety of tasks, from towing and working threshing machines , to plowing.

One the value of the traction engine had been established it soon found a use in many parts of the world for heavy haulage work and appeared in an exotic guise as a showman's wagon.

The latter was not only used to haul rides to fairgrounds but also powered a dynamo that could light up the fair at night. By the end of the nineteenth century, steam on the road took on a new life with the development of steam cars ans trucks.

For a time they vied the new internal combustion engine for supremacy on the road. The American  Doble Company even developed a 100 mph steam sports car. Ultimately, steam lost the war, but steam vehicles survive and delight us still, thanks to enthusiastic owners and restorers.

Anthony Burton has been a professional writer and broadcaster for over forty years, during which time he has largely concentrated on the history of industry and transport.

His books include "The Canal Builders", recently reprinted in its fifth edition, and "The Railway Builders".

He has written a biology of the great steam pioneer Richard Trevthick and is currently writing the story of railway pioneer Joseph Locke.

He has worked as writer and presenter on a number of TV programs for all main channels, including documentaries on the National Railway Museum, the Great Western Railway, the locomotive trials at Rainhill and the Great Dorset Steam Fair.

Pen & Sword is located in the UK.

I see on the Scale Mates web site that there are lots of models of steam powered things: trains, tractors, ships etc. Some of these can probably be found at a model railroad shop.

I want to thank Casemate Publishing for this review sample. Casemate is the N.American distributor of Pen & Sword books and all their titles can be viewed on Casemate's site at:
www.casematepublishers.com