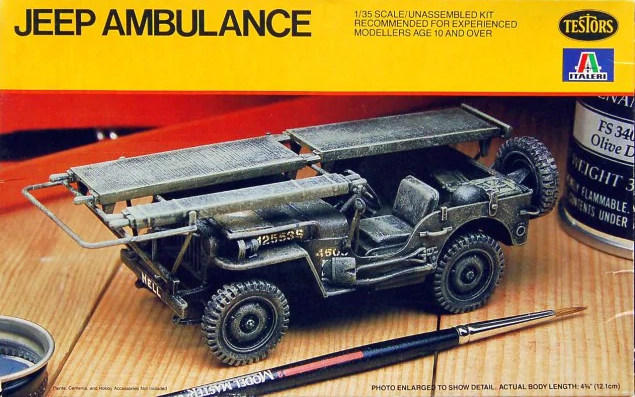 Probably the most famous military motor vehicle of all time, the Jeep was developed from a vehicle designed in 1940 by Karl K. Probst of the American Bantam Car Co.

The U.S. Army has asked private industry to submit designs for a light, "Go-anywhere" field car, and about 70 of the original Bantam Reconnaissance Cars were built and tested by the Army during 1940-41.

Sometime during these tests, the name "Jeep" became associated with the vehicle. Historians disagree as to its derivation, and though always known to the military (officially, at least) as the "Truck, Utility, 1/4 Ton, 4 x 4", the name stuck.
"Jeep" became and has remained the universal name for any small, light, cross-country car.

Though designed by Bantam, the vast majority of Jeeps produced during WWII were built by Willys-Overland and Ford. How this came about is shrouded in a certain amount of mystery, though the reason given for the government turning the bulk of Jeep production over to these two automotive giants was that the small Bantam Co. did not possess sufficient production capability to fulfill the tremendous orders that came during the war.

Designed as a light utility and cargo/personnel carrier, the Jeep was employed by all branches of the U.S. military, as well as the armed forces of all our allies. Even the enemy used Jeeps whenever they were able to capture them in running condition.

At the close of the war in the Pacific, it was discovered that Toyota in Japan was preparing to begin mass-producing an almost exact copy of a Bantam Jeep for use by the Japanese military.

In addition to its widespread use as a utility and cargo vehicle, the Jeep proved successful in literally dozens of other roles, some of which were staff and scout cars, towing vehicles for small artillery pieces and trailers, heavily-armed raiding car, ambulance (carrying up to four wounded at a time plus the driver), radio carrier, self-propelled rocket-launcher, observation post, military police car, and even as a "locomotive" for towing supply wagons on narrow-gauge railway tracks.

An experimental half-track snow-mobile version existed, as did an amphibious Jeep (mass produced by Ford), and a long-wheelbase troop carrier, seating up to ten soldiers.

Testor was the importer and distributor of Italeri kits in the 80's. Italeri is a an old prolific model company that manufactures many different models in the popular scales.

Testor was based in the 80's when this kit was released in Rockford, IL.
This kit came in a shrink-wrapped end-opening  type box.

The box art show a color photo of the Jeep ambulance made up in a British scheme on a modeler's work table.

It is is overall olive-drab, with white stenciled serial no. 12553S on the sides of the hood. A white 450S over 3 white wide horizontal bars on it's sides, just in front of the door openings, a white "NELL" on the front of the front bumper and a white circle with a red cross on it on top of the hood.

One side panel has the history of the Jeep, followed by a color side-view of it in olive-drab with no markings shown,

The kit is recommended for experienced modelers age 10 and over. It makes up to be 4 1/4" long.

​The other side panel has a list of materials required to complete assembly of the kit: cement, paints, hobby tools, brushes and tape, followed by a repeat of the illustration of the Jeep on the other side panel.

​The bottom of the box shows 6 color walk-around type photos of the model made up in the box art scheme.

Features of the kit are given as: An exact 1/35th scale model of a Jeep ambulance. 70 highly-detailed injection-molded plastic parts. Special features include: complete 4-wheel drive-chain, engine details, hinged windshield and 3 stretchers. Authentic decals and an easy-to-follow manual is included. Kit was printed in the U.S.A. and parts made in Italy.

Copyright is 1982 and Testor's address in Rockford, IL is given. 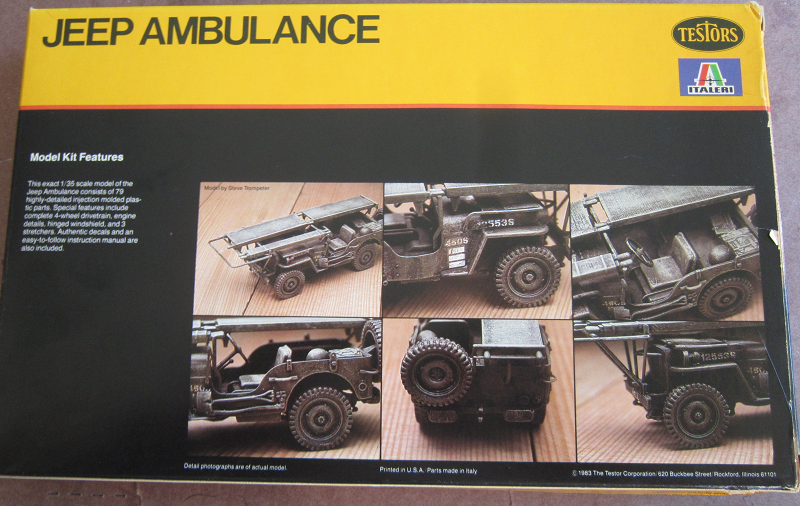 This kit contains 2 dark-green trees and the decal sheet in a sealed clear cello bag and the instructions.

Page 1 begins with the history and specifications of the Jeep, over BEFORE STARTING, preparation of parts and painting instructions.

Page 3 through 6 give a grand total of 8 assembly steps, with a lot of text.

Page 7 is the marking and painting guide, showing two 4-views of the Jeep.
One in U.S. markings and one in British markings.

The British scheme has been described above already.

Page 8 has a lot of text for weathering hints and a black and white photo of the model made up in the U.S. scheme.

Trees are not alphabetized. Instead they are labeled with geometric symbols, a star, a circle and a square. They do have part number tabs next to the parts on the trees.

Three parts are X'd out in the parts trees illustrations as being excess and not needed to complete the model. 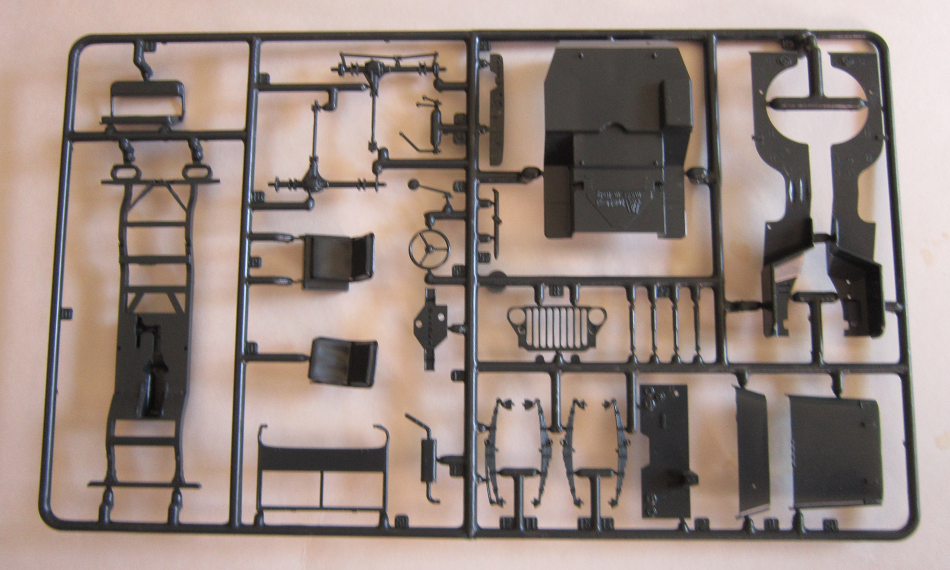 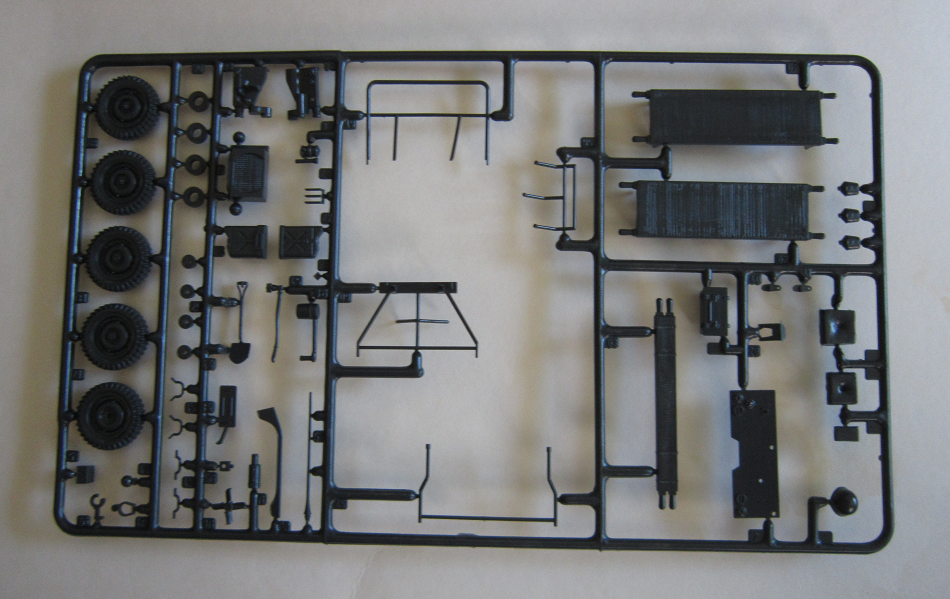 ​The clear tree is labeled as a square. It holds the windshield and headlights (4 parts)

One part is excess. 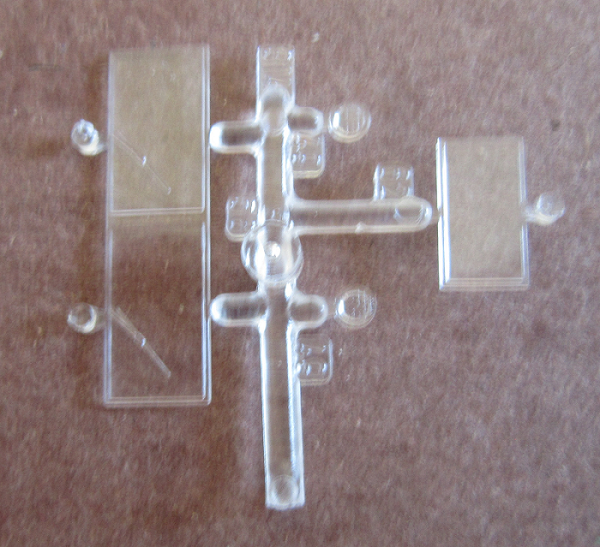 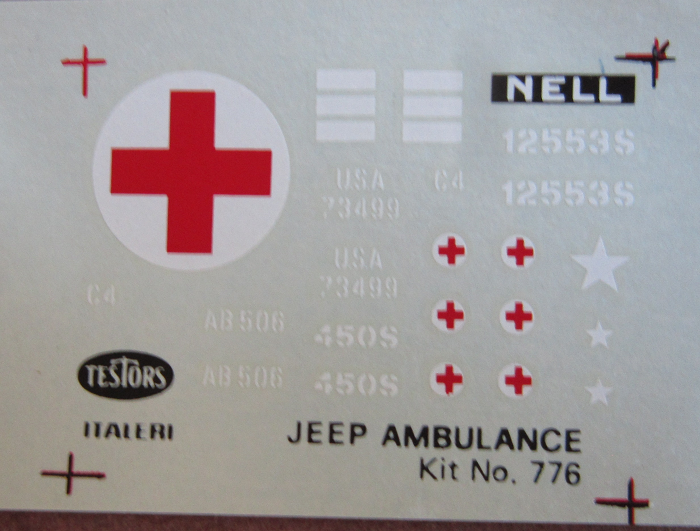 ​There are no figures provided. It would have been nice to have had a driver and some wounded soldiers provided.
​Otherwise, highly recommended.