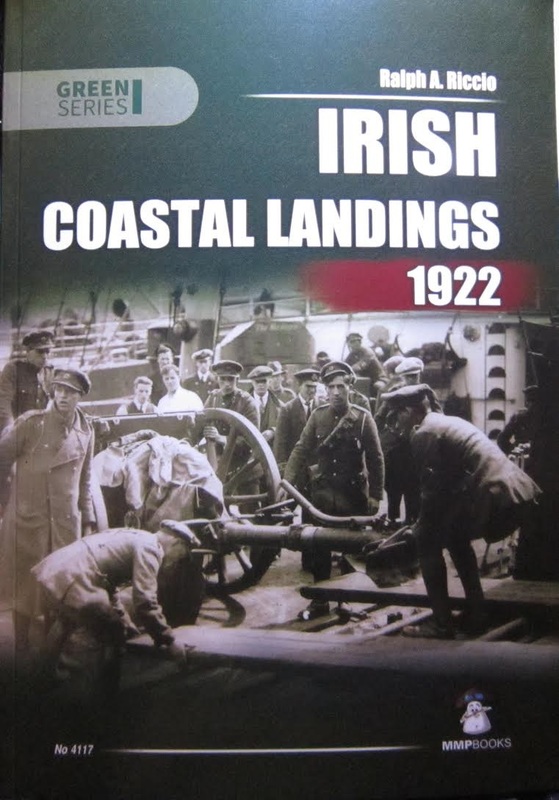 Mushroom Model  Publications (MMP) is based in the U.K. Their books are printed in English by their associate Stratus in Sandomierz, Poland. Stratus also does their own line of books in Polish and English.

This book is a history of Irish National Army coastal landings, many of which have been previously unreported in histories of the Irish Civil War, that were carried out against Republican forces from July through December 1922. It provides details on each of the landings to include specific landing sites, the ships used to transport the troops, number of troops, armored cars and artillery involved, casualties, major personalities who participated, and objectives achieved. In addition to period photos of the ships, equipment and troops involved, the text is also supported by both vintage and current comparative photographs of most of the landing sites. The book also includes, for the first time ever, superb scale drawings of all of the ships involved in the landings.

11 of these are of individuals.

26 are of various ships.

47 are of buildings in Ireland.

There are 2 photos of a Republican rail road armored car.

In the last few pages of the book there are color profiles of ships to no scale.  These are:

The back cover has the color cover arts of two other books regarding Ireland: “AFV’s in Irish Service Since 1922, From the National Army to the Irish Defence Force” & “The Irish Artillery Corps Since 1922”.

The book will appeal  mostly to historians and not so much to modelers I’m afraid.

This book came from Casemate packaged with 4 other review samples in a sturdy cardboard box and wrapped inside in clear bubble pack.

I want to thank Dr. Roger Wallsgrove, Editor-in-Chief of MMP and Casemate for this review sample.

Casemate is the N. American distributor for MMP books and a listing of their titles can be seen on their website at: