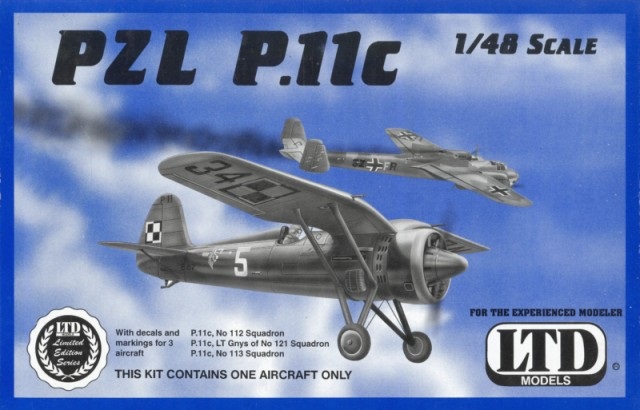 At a time when the rest of the aviation world was locked into the strutted biplane concept the brilliant young Polish designer Ing. Zygmount Palawski introduced his P-series that, in a sense, helped to spawn a slow revolution in aviation design.

When the P.11 was flown for the first time in September of 1931, it was obvious that the new fighter was a world-class fighting machine that could hold its own against any competitors and best most of them. Zygmount Palawski, had been killed in a flying accident six months earlier and would never see his brainchild reach its full fruition.

The production prototype, powered by a 517 hp Skoda-built Mercury IV S2 engine, differed from its predecessors by having an exhaust collector ring and armament for two 7.7 mm Browning machine guns. Maximum speed was 215 mph. With earlier P.7 and continuing through the P.11, the Polish Air Force was the first air force to be equipped solely with all metal monoplanes.

Romania, casting about for a fighter with which to modernize its fledgling air force, ordered 50 PZL.P.11b air frames to be powered by the 595 hp Romanian built IAR (Gnome-Rhone) engine.

Besides Romania, orders were placed by Turkey, Greece, Portugal, Sweden, Czechoslovakia, Yugoslavia and Japan. An order was also placed by the Spanish government, but strict rules of Polish neutrality and credit problems prohibited acceptance of the order.

On the morning of 1 September 1939, the Luftwaffe swarmed into Poland with over 1,900 aircraft. Opposing this air armada were 392 aircraft of which 158 were single seat fighters. Of these, 128 were P.11s and 30 were the earlier P.7. The small Polish fighter force had been divided into a single persuit brigade of 53 aircraft charged with the defense of Warsaw, while the remaining 105 fighters were divided into small units and distributed among the field armies where they were to carry out army co-operation duties and local ambushes of enemy aircraft.

The Luftwaffe’s original plan called for a massive strike against Warsaw. However, weather diverted the main attack to Krakow. The Luftwaffe battle plan was to attack and destroy the small Polish Air Force on the ground. The Poles however had moved all operational aircraft to a camouflaged secret airfield. One of those fighter units deployed around Krakow was the 122nd (Flying Wing) with ten fighters. Which for the last ten days had been attempting to ambush Luftwaffe reconnaissance aircraft from Aleksandrowice airfield.

Hearing bombs exploding in the distance, Captain Mieczyslaw Medwecki and 2nd Lieutenant Wladyslaw Gnys raced to their P.11c fighters and took off, directly in the path of a pair of Stuka’s coming from the attack on Krakow. The Stuka’s attacked the vulnerable fighters, and Medwecki’s aircraft blew up in ball of fire. Diving away to evade the attacking Stuka’s , Gnys reovered just above the ground and thn began climbing. As he gained height, the young pilot spotted a pair of Dornier Do-17’s below him.

Diving to the attack, Gnys put several bursts into the rear machine who’s port engine began streaming smoke. As the first Dornier began loosing altitude, Gnys attacked the lead bomber putting several long bursts into the enemy machine and dove away to avoid return fire. Both kills, Do-17E’s of KG 77,one of which carried the code “3Z+FR” would be confirmed by personnel on the ground.

LTD Models was based in Carrollton, Texas. I don’t know if they still exist?

This kit came in a un-shrink wrapped end opening type box. I am no fan of this type of box. Parts always seem to find their way past the end flaps to become lost forever. Give me a tray and lid box any day of the week.

The box art shows a PZL P.11c shooting down a Dornier Do-17E. The P.11 is in overall brown with blue below its parasol type wing.

The forward end of the cowling is ringed in copper color.

A black 34 is below the left wing next to large checkerboard.

Another checkerboard is below the other wing followed by a black letter N.  This is aircraft no. B.67 flown by Lieutenant Gnys of the No. 121 Squadron, III/2 Dyon, 2nd Air Regiment, Krakow September 1939.

The B.67 number is on the sides of the fuselage in small black letters just in front of the rudder. High on the rudder is a small black P.11c and PZL’s logo.

One side panel shows a color box art for a Romanian IAR-89A fighter that LTD markets in 1/48th scale. No kit number for it is shown.

This is followed by a one paragraph history of the IAR-80A and MOLDED IN THE CZECH REPUBLIC, PACKAGED IN U.S.A.

The other side panel repeats the box art in color, but smaller, followed by a one-paragraph history of the PZL P.11c and the statement that the model is for adult collectors and is not suitable for children under 14 years of age. LTD Models street address in Carrollton, Texas is provided.

The bottom of the box announces the kits contents: DECALS AND MARKING FOR 3 AIRCRAFT. This is above three 3-views of marking and painting schemes.

1.     A PZL P11c number B-14 of number 112 Squadron, IIIrd dyon, 1st Air Regiment, Warsaw-Okecie. It is in the same scheme as the box art subject. It has a white number 1 on the fuselage sides, followed by a white triangle with a black figure on it. A small black B.14 is behind this triangle.

A black P.11c is high on the rudder with PZL’s logo below it.

2.     This one is the box art subject, already described above. It has a small black B.67 behind the red bird insignia on the sides of the fuselage and the black P.11c and PZL logo below it on the rudder too.

3.     A PZL P11c number B.39 of the 113 Squadron, IV Dyon, 1st Air Regiment, Warsaw-Okecie, during September of 1939. It is in the same color pattern as the other two schemes, with a white number 10 followed by the white triangle with the black figure on it. A small black B.39 follows the triangle. It has the black P.11c and PZL logo high on the rudder also.

The instructions consist of a single sheet that accordion folds out into 6 pages in 9” x 11” page format.

Page 1 of the instructions begins with introduction by LTD’s owner: Jerry L. Campbell, telling about his company and the kit and what his intentions are for the company:

“LTD kits are produced to offer the 1/48th scale modeling enthusiast subjects that for one reason or another have been consistently overlooked. Having been a modeler for some 45 years, and in the hobby business for almost 30 years, I have time after time tried to interest manufacturers in the somewhat lesser known, but never-the-less historically important aircraft (and to be honest, aircraft that I wanted to build).

Consequently, it is with great pleasure that we at LTD Models are able to offer this line of limited production short-run kits to those, like ourselves, that wish to add these aircraft to their collections.

However, please note that these kits are not produced from highly sophisticated long run hardened steel molds and, consequently some details such as locating pins etc. can not be provided and may have to be fashioned by the modeler if required.

Heavy sprues and a certain amount of flash are unavoidable in the molding process.

This is followed by the history of the PZL P11c and two black and white photos of the model made up in the 3rd scheme as white number 10 aircraft.

Page 2 begins with international assembly symbol explanations, above the first 3 assembly steps. Several location holes are shown to be drilled out.

Page 3 has the 4th and last assembly step above color instructions at the bottom.

Page 6 has a 3-view scheme for white no. 10’s scheme. A white band is shown across the top of the left wing top.

There are NO parts tree illustrations in the instructions and no part numbers called out. This means that careful study will have to be done of the assembly steps to get the right parts each step.

There are also no part numbers on tabs next to the parts on the sprues. Bad move LTD.

The 1st very pale grey parts tree holds the parasol wing halves and their struts etc. (21 parts) The upper wings have beautiful fabric detail molded on them on top. 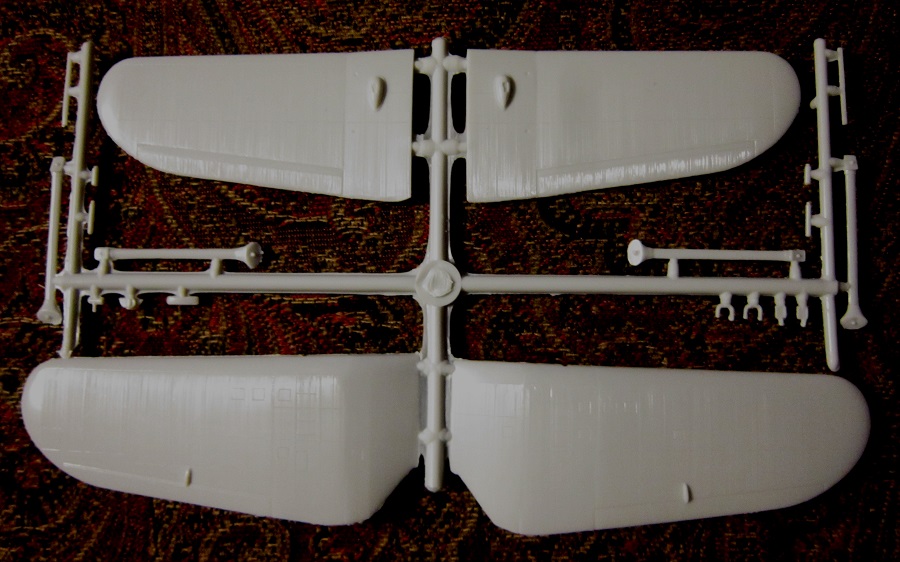 The 2nd very pale grey parts tree holds: the fuselage halves, elevators, wheels and propeller (7 parts) These fuselage halves have very nice braces molded into the walls of the cockpit and nicely done detail for a fabric covered area on the rudder. 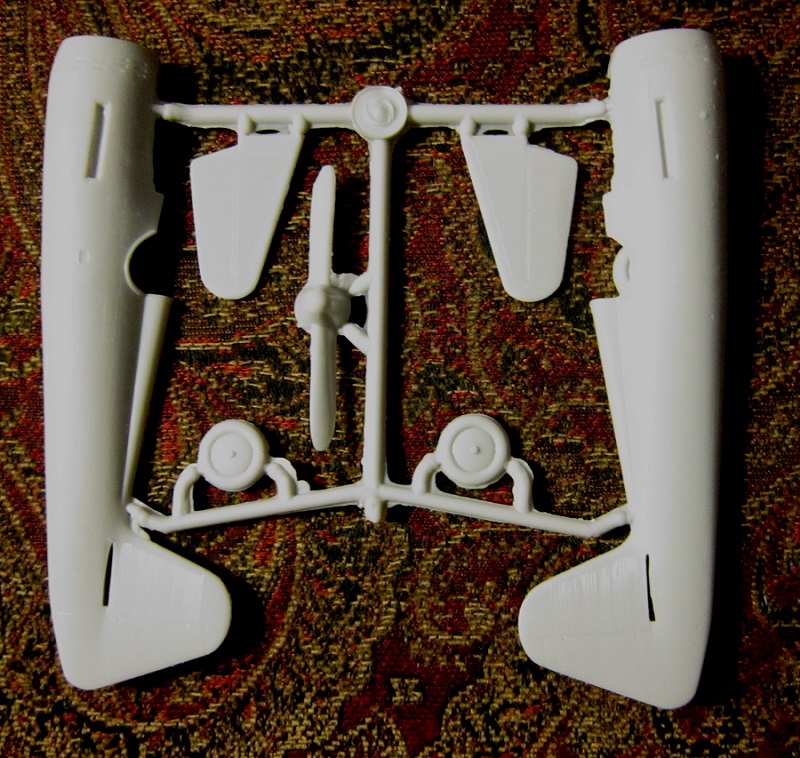 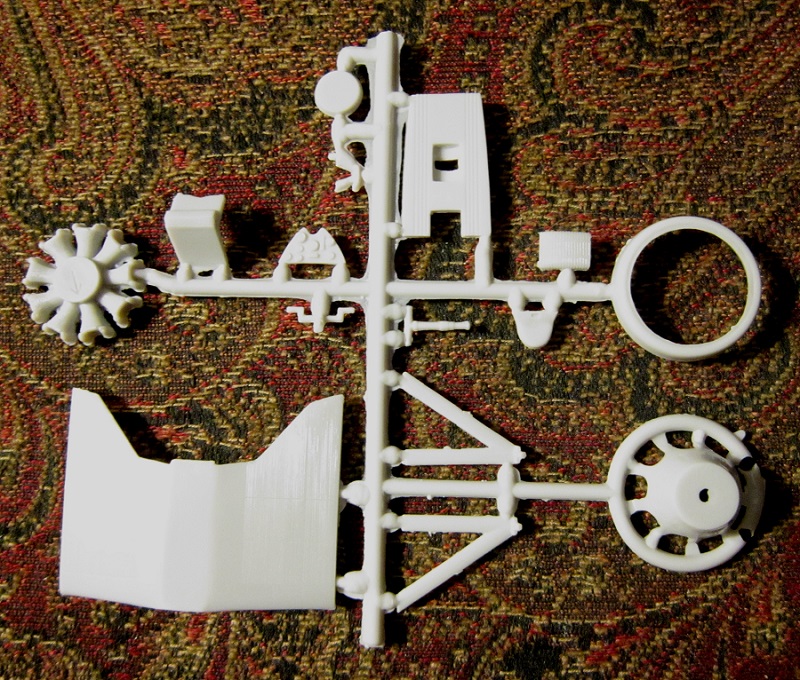 There is an EXTRA main wheel in the kit.

The loose very pale grey cowling part and the vacuformed windshield and the decal sheet complete the kits contents. There are 2 windshields provided, increase you manage to mess one up. 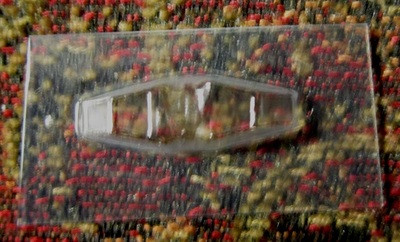 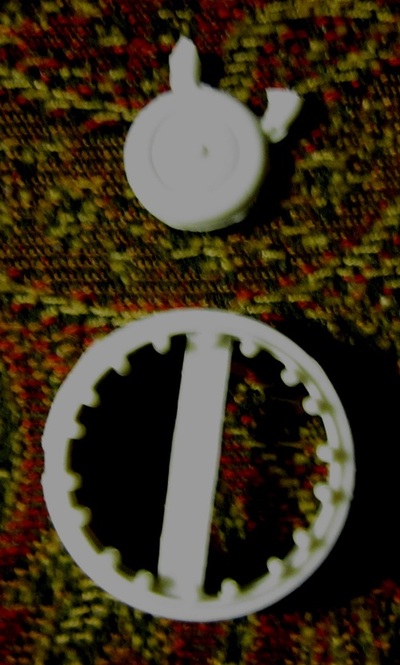 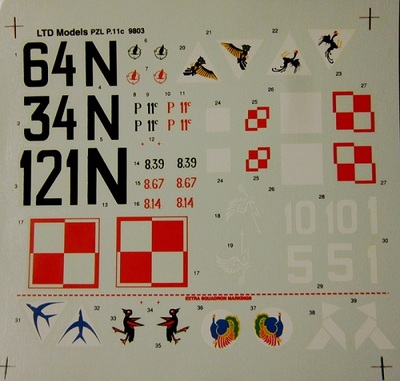 Panel lines are all of the engraved type.

Control surfaces are all molded in solid and would take surgery to make them separate.

This aircraft has no rigging required, but there are wires to be added for radio antenna if a modeler cares to make them.

This is a neat kit and highly recommended if one can find one. However, as mentioned above it was a limited run kit and the molds are gone after years now.

I recommend this kit to modelers that have had experience building other limited short-run models.