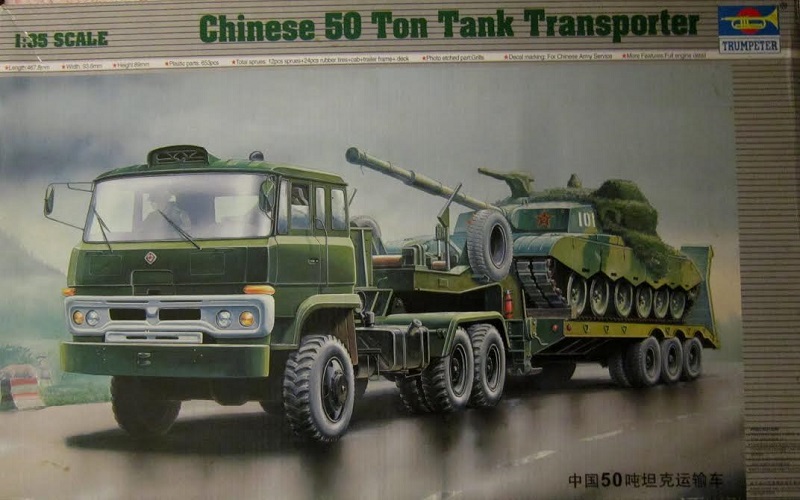 This vehicle is a domestically produced Chinese heavy truck called the HY 473, although it is obviously heavily influenced by the Japanese Hino and the German Daimler-Benz trucks (the latter being produced in China under license).

While the original version was approved for production in 1982, a latter 1996 version with turbocharged diesel engine (called the HY 521 according to its sales literature) is more powerful and has other improvements. The truck itself is classed as 24 metric tons, but is rated to tow a goose neck trailer with up to 50 metric ton tanks on it – such as the Type 96/Type 98 (the latter pictured on the box art) main battle tanks.

The system with the later HY 521 is capable of pulling up to a 75 metric ton load. The trailer is a specially designed HY 962 12-wheeled trailer. Although the tractor is a 6 x 6 vehicle, the low clearance of the lowboy and “street” tires limit its off-road recovery capability. In essence, this is a high-speed transport for tanks and other armored vehicles, with a top speed noted of 64 kph (40 mph).

This kit provides the basic HY 473 and HY 962 combination.
THE KIT:

​Trumpeter is a prolific model company base in Shanghai, China.
They make all manner of model subjects in the popular scales.

This kit comes in a large 19” x 12” shrink-wrapped tray and lid type box. A real shelf eater at the hobby shop or in a modeler’s stash.

The box art shows the transporter and it’s trailer moving down a paved road that appears to be wet from rain. A coolie and his oxen is barely visible in the background.

The transporter and trailer are in dark green with black undercarriages.

The transporter is hauling what looks to be a ZTZ-98 PLA tank on the trailer. This tank is in a base of light sand with green wave bands. It carries a white turret no. 101 on the sides of the turret and a red star on the left front of the turret. It is under heavy camouflage netting. The tank shown is not included in the kit.

At the top of the box art it says that the model makes up to be 18 ½” long, 3 ½” wide and 3 ½” high. The kit contains 653 parts on 12 trees, 24 vinyl tires, the dark green cab shell part, the dark green trailer deck and frame parts,  a brass PE fret, a clear tree, decal for Chinese Army markings and full engine detail. One of the 12 trees is orange in color.

One side panel has a color side view illustration of the transporter and trailer and a front and rear view of it, followed by MADE IN CHINA and Trumpeter’s street address in Shanghai and their web site address.

There are 9 olive-drab parts trees in the kit, the loose olive drab cab shell, trailer deck and trailer frame, an orange parts tree, 2 clear parts trees, a brass PE fret, 3 metal springs, 2 aluminum axles, a length of vinyl hose, a length of thin insulated wire, a bare copper wire, a length of string, the decal sheet and the instructions.

The instructions consist of a staple bound booklet of 24 pages in 7 ½” x 10” page format.

Page 1 begins with a black and white repeat of the box art, followed by READ BEFORE ASSEMBLY instructions, a list of suggested paint colors to use to complete the model, international assembly symbol explanations and decal application instructions in Chinese and English.

Page 2 to the top of page 3 have the parts trees illustrations.

The bottom of page 3 through to page 23 give a grand total of 39 assembly steps.

Page 24 has the only scheme provided in the kit as a 5-view. The transporter and trailer are both olive drab with black
undercarriages. The transporter has license plates on the front and rear with the number AOI-8360 on them.

There is a long white cardboard “shelf” box in this kit that has the trailer bed and frame parts on top of it and the two clear parts trees (clear trees are in a sealed cello bag). 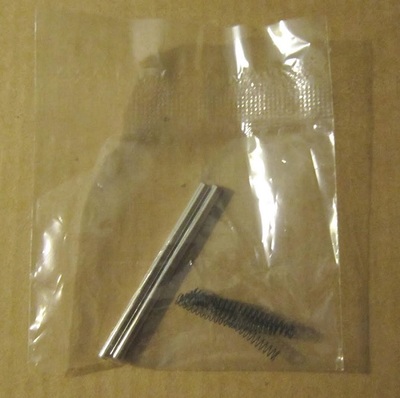 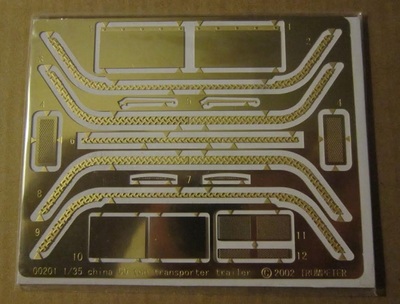 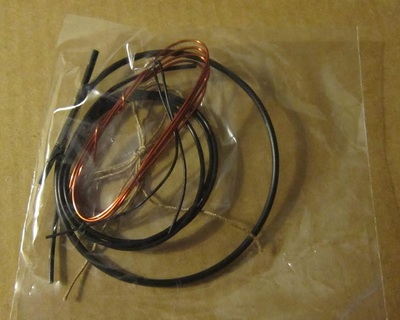 Working features in the kit are:

A working steering wheel.
A tilting cab with optional support pistons for posing it.
Sliding landing gear legs and moveable ramps.
The rear axle bogie on the trailer can be made to operate, as none of shafts flex this does not appear to be a recommended option.

I am going to beg off of my usual habit of naming the parts on the trees. Due to the daunting amount of parts in this kit it would take me an eternity and then I would surely miss-name things. Instead I humbly beg readers to just look at the pictures of the trees to see what is there.

I have included photos of everything but the decal sheet. It is white lettering on white backing and I could not get anything to appear in a photo no matter how I changed the focus.

There are 2 identical olive-drab letter C and D parts trees, a large and a small tree of clear parts. 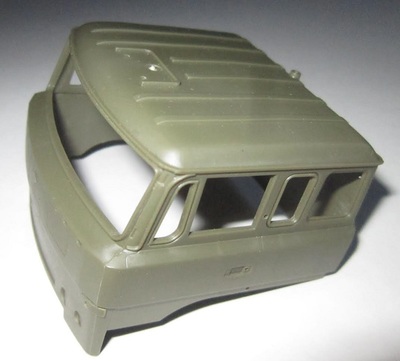 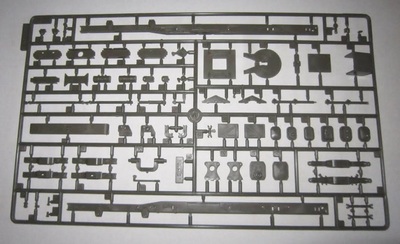 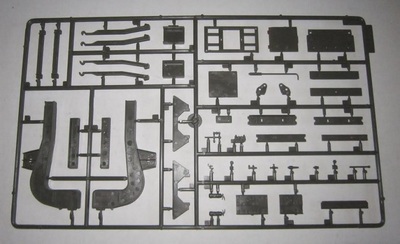 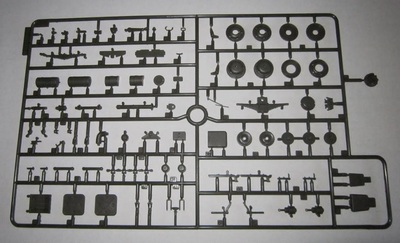 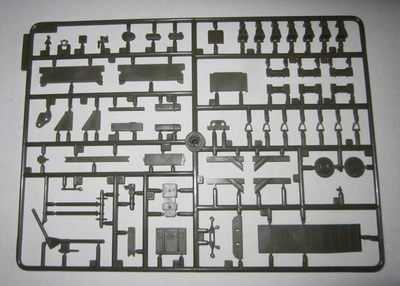 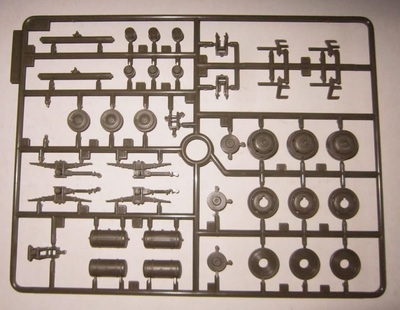 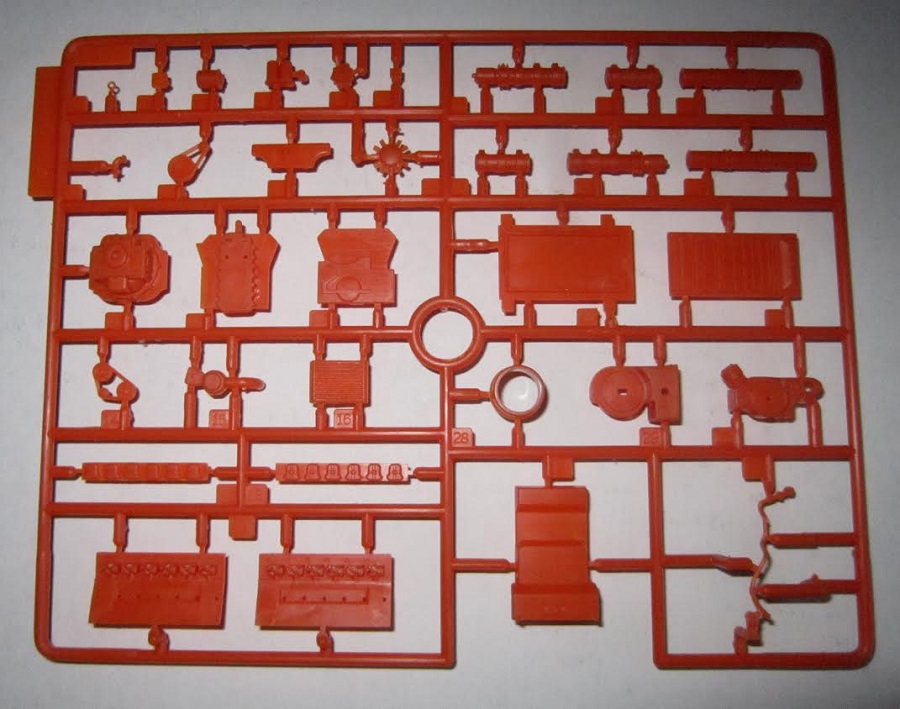 There are no crew figures in the kit and I’m disappointed that the cab doors are molded in solid and not separate. The cab gets a lot of interior detail that will be nearly impossible to view all buttened-up.

Throughout the assembly steps Trumpeter tells you what to paint various parts. These small parts will have to brush painted and will be a long task.

Trumpeter calls out the strange color COCOA BROWN. They say that is Gunze Sangyo H17/29.

This kit comes with 10 large and 14 small black vinyl tires. The large ones have a significant molding ridge all the way around the center of the tire. Some modeler have tried freezing some vinyl tires to make it easier to sand off the seam. However, the tires in this kit are so soft and floppy it may not be possible to do that. 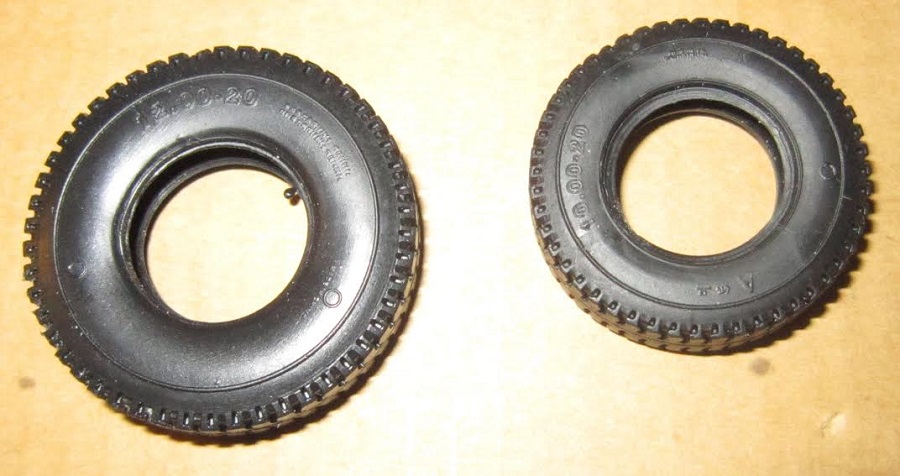 ​The one color scheme for the model is pretty blah, for the PLA – olive drab with black chassis details. However, the front deck off the gooseneck trailer is wood and the directions call for it to be painted a natural wood color. Decals basically are for the license plates and warning panels only.

This is a beautifully detailed kit, but might be passed over because it is so obscure for more popular subjects.

This is a very complex kit with it’s 653 parts. I recommend it only to advanced modelers who have a few other kits of this complexity under their belts. It is not for the novice modeler and is no way a weekend project.  Otherwise highly recommended.

I got this kit a good 10 years ago. I donno if it is still around or not.
I am willing to sell my kit as it was a gift to me back then from a relative who really didn’t know my kit subject preferences and I have nil or little interest in modern armor stuff – especially PLA armor. Price is negotiable and will not include postage.