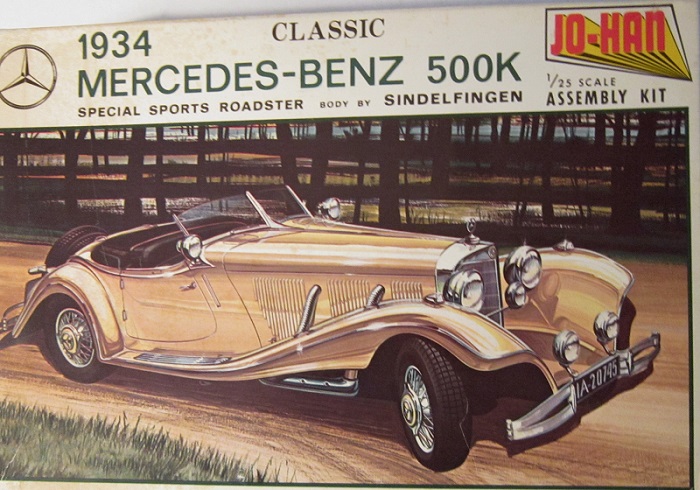 The Berlin Auto Show in the spring of 1934 saw the introduction of a new series of high speed cars from the Stuttgart firm of Daimler-Benz, A.G. They were the super-charged eight cylinder Mercedes known as the Model 500K The 500 referred to the engine’s 5 liter displacement, and the K stood for “Kompressor”, the German term for the super-charger. Of the three cars exhibited at the auto show, one was to become a most sought after collector’s item, this Special Sports Roadster.

It succeeded the Mercedes-Benz 280 which had been introduced only the previous year, using a larger, more powerful engine and more opulent coachwork to meet customers demands for greater luxury and performance.

The 500K used the same independent suspension setup as had been introduced in the 380, with a double wishbone front axle, double-joint swing axle at the rear, and separate wheel location, coil springs and damping, a world first. Consequently, it was a more comfortable and better handling car than Mercedes’s previous S/SS/SSK generation of roadsters from the 1920’s, and offered greater appeal to buyers, particularly the growing number of well-heeled female drivers of the time.

Using a separate foot-operated pedal alongside the accelerator to engage the Roots supercharger, the five litre straight eight engine produced 160 horsepower and was capable of over 100 mph, consuming fuel at the rate of 9.4 miles per gallon as it did so.

Three different chassis and eight bodies were available for customers: the longer “B” and four seat cabriolet versions rode on a wheelbase of 129.5 in, and would later be used on other sedan and touring car models.

The short “A” chassis, with a 117.3 in wheelbase, underpinned the two-seater models…the Motorway Courier….and the 1936 Special Roadster which offered high performance.

All models featured such advanced equipment as safety glass, hydraulic brakes, and a 12-volt electrical system sufficient to bear the load of the electric windshield wipers, door locks and indicators.

342 500K’s were built during its two years in production, including 29 Special Roadsters, before being replaced by the even more powerful 540K in 1936.

Today, they remain highly prized for their heritage and scarcity. When the car collection of Formula One supremo Bernie Ecclestone was auctioned in October 2007, it included fire pre-war Mercedes, and his 500K Special Cabriolet fetched almost 1.45 million dollars.

Jo-Han was a prolific model company based in Detroit, MI. I don’t know if they exist anymore. The did cars, ships, aircraft etc. I have a few of those in my stash.

This kit came in a shrink-wrapped tray and lid type box. The box art shows a 500K parked on  dirt road near a thick woods. It is in overall gold with a black interior. The front license plate is black with the white number IA-20745 on it.

One side panel of the box says the kit has an extensive frame-pack. This means that the parts trees stack on top of each other and lock together. This is to stop rubbing and scratching of parts. Every part is securely locked in frames, every frame is held in position, no breakage, parts evenly distributed, easy location of all parts, all parts numbered and virtually tamper proof.

This is followed by a one paragraph history of the car and two color illustrations of the chassis and rumble seat (which is operable). Below these is Jo-Han’s address in Detroit and MADE IN U.S.A.

The largest jet black tree holds: the chassis, seats, rumble seat hatch, wheels and brake drum parts, dash board, license plate, large steering wheel, exhaust etc. (about 36 parts) I have removed some because I have started some assembly. 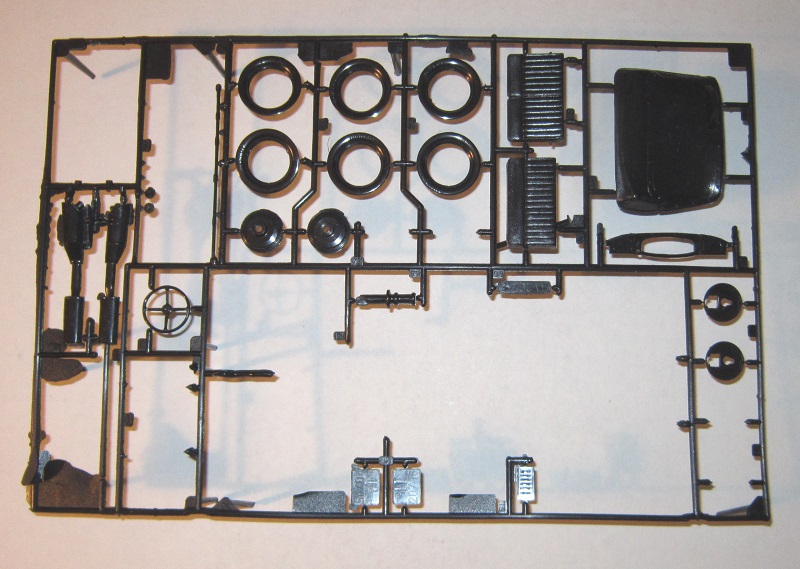 A medium sized jet black tree holds the instrument dials and shift levers etc. (about 17 parts) Again I removed some to start building the kit. 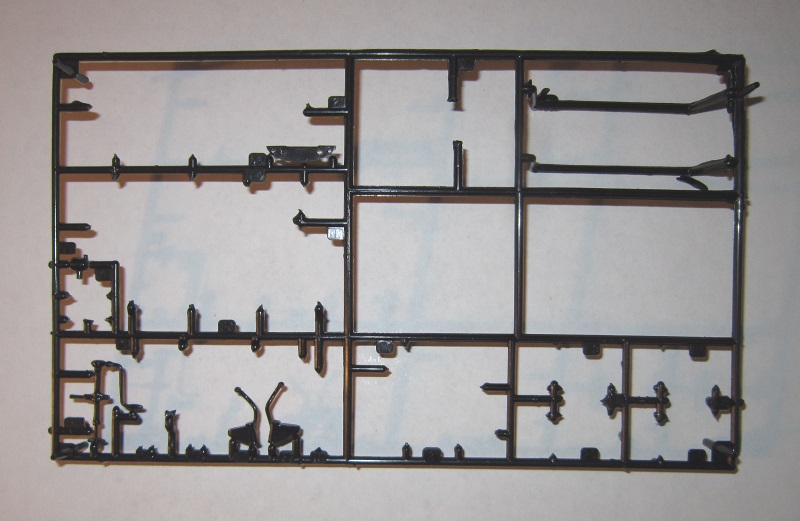 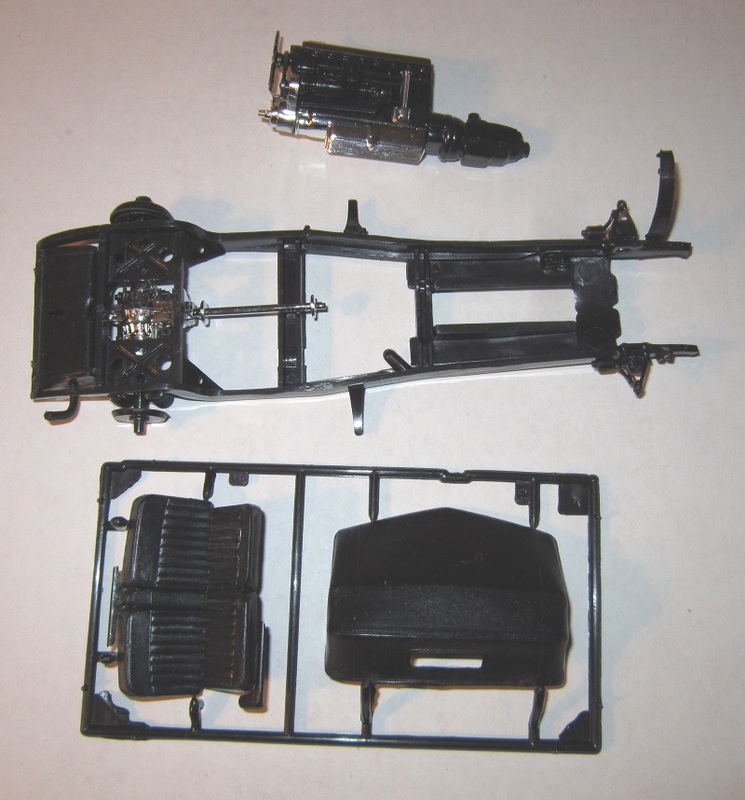 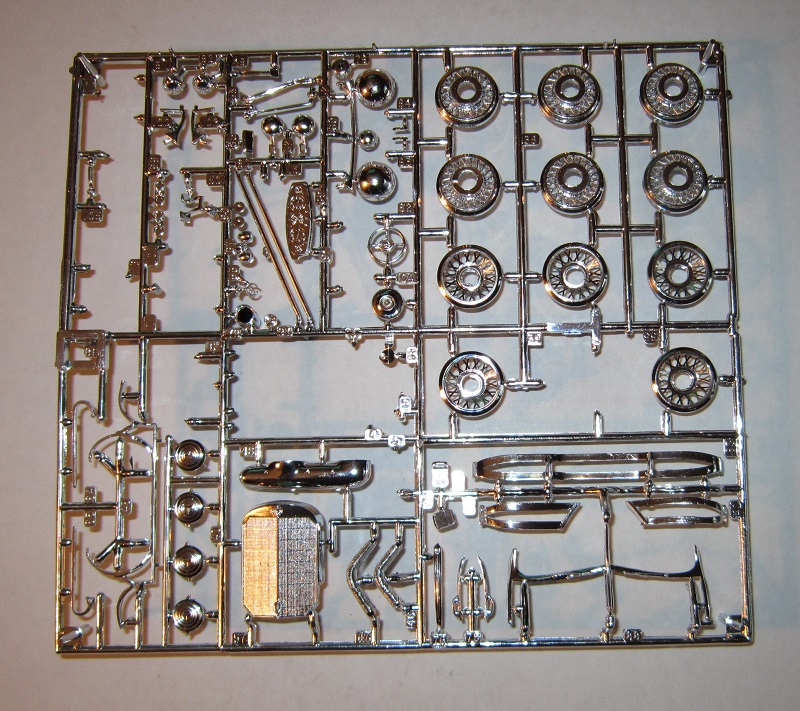 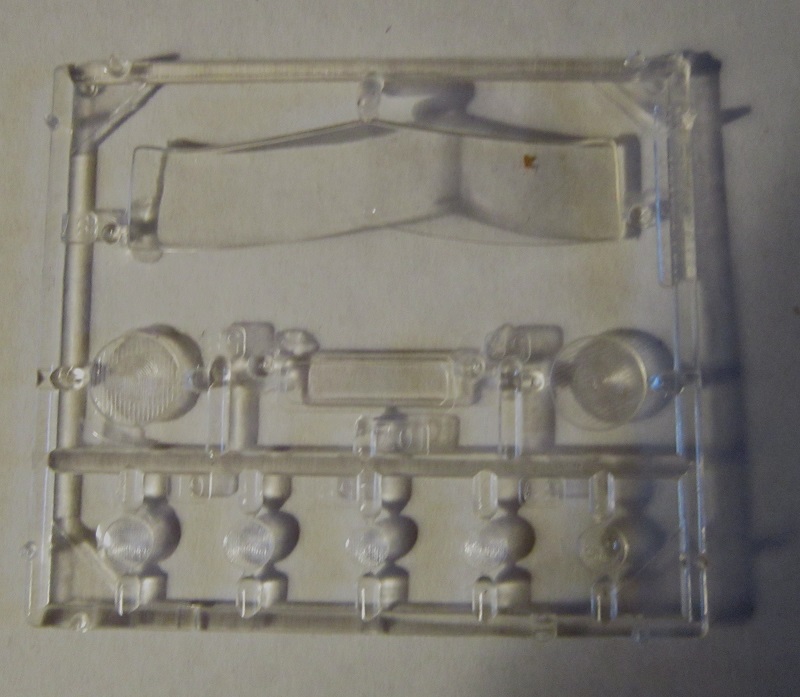 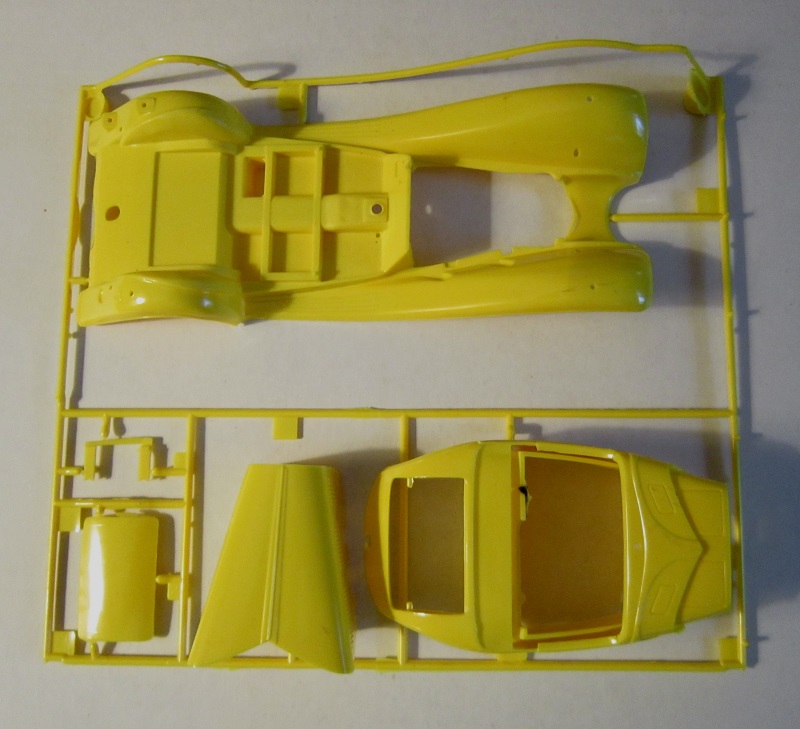 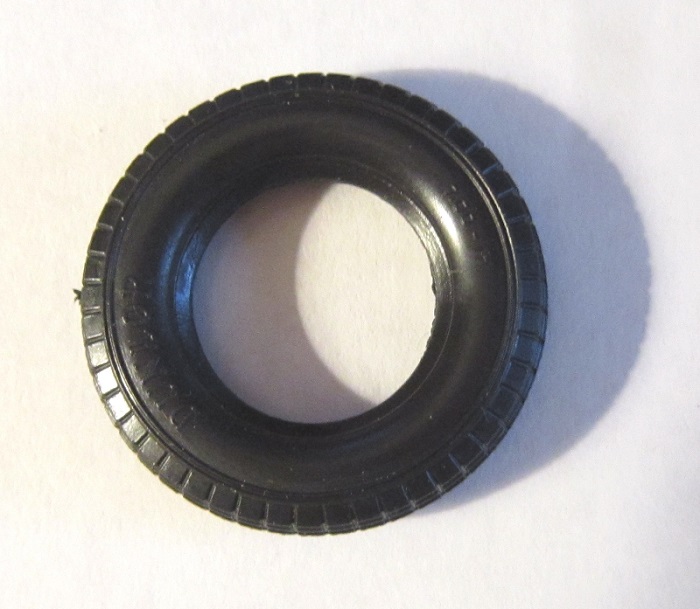 There are no decals in the kit. However, I have a left-over decal from an old Revell kit of a German Horch KFZ-15 command car I’m going to use.

The instructions consist of a single sheet, printed on both sides, that is 8 ½” x 15” and folded 3 times along it’s length to fit inside the box.

One side begins with READ BEFORE YOU BEGIN instructions, followed by the first 3 assembly steps. The other side continues with a grand total of 5 steps. Each step has lengthy written instructi0ons in them as to how to proceed in the steps. The bottom of the page has painting instructions.

I know that some high-ranking Nazi’s owned some of this car. I don’t think Hitler ever did,. He was usually shown in wartime films riding in a 6-wheeled Mercedes.

I bought the kit years ago because I thought it was cool and could fit it into a WWII model collection with appropriate license plates and Wehrmacht or Luftwaffe division markings.

I wish some figures had been included. Anybody know of some Germans in 1/25th???

I bought my kit years ago for a song.

I have started to build this kit, but then got distracted somehow to do something else….sigh.