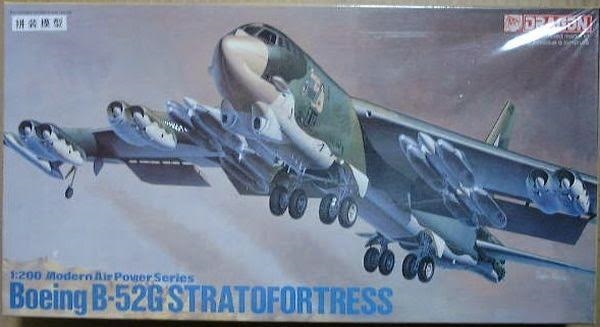 MSRP: $20.00 for a later different box rotary launcher and 12 on under wing pylons.
​HISTORY:

The Boeing B-52 Stratofortress has formed the backbone of the USAF Strategic Air Command Force for more than a quarter century. The G model is assigned with the strategic strike mission. It is the launch platform for the SRAM and the ALCM.

The significant modifications to the G model as compared to older models include adoption of the new Offensive Avionics Systems (OAS) which improves the navigation and weapons delivery accuracy, and the fitting with ASQ-151 Electo-optical Viewing Systems (EVS) which use FLIR and LLTV sensors for low-level flights.

The B-52G can be modified to carry AGM-109H "Tomahawk" air-to-surface missile and AGM-84A "Harpoon" anti-shipping missile.
A total of 193 B-52G's were delivered.

This kit came in a shrink-wrapped tray and lid box, I'm sure, because DML always shrink-wraps their kits. My kit was won at a IPMS contest raffle recently and had the wrap removed.

Not only that, but I think this kit was donated to the raffle from the stash of one of the host chapter members. All the parts had been clipped off the trees and the trees were GONE.
I had to check the loose parts against the parts trees drawings to make sure they were all there. I discovered one of the elevators was missing....sigh.

I don't want to go to DML USA to get a replacement because I contacted them before recently about a missing decal sheet in a AFV kit. They sent me the sheet, but were very reluctant and snotty about it.

It comes in long box. I strongly suspect that this box was too long and blousy for the contents originally.

The box art shows a B-52G on a take-off roll. It is in a wave pattern of khaki and dark green over a white under-carriage and has a cream colored nose. There is a white triangle on the rudder that is outlined in black and with a black letter K on it.  A black letter USAF is above the right wing and small star and bar insignia is above the left wing and on the fuselage sides.

There is a Strategic Air Command shield on the left side of the nose followed by the number 0189 in black and an illustration of a naked woman labeled with the white name "Special Kay" outlined in black. The right side of the nose repeats the 0189 plus another shield logo and an illustration of a bomb heading for a bulls eye. A small black USAF over 80189 is at the top of the rudder.

​This B-52G is in a wave-pattern of dark-green and dark-grey. It has a black statue of liberty illustration on the rudder with rows of white horizontal stripes and the black word Griffiss. There is a white shield over a black eagle and black number 0165 on each side of the nose, a small star and bar insignia below the right wing and atop the left and on the fuselage sides. A small black USAF over 80165 is at the top of the rudder.

The other side panel has one paragraph histories of the B-52G in 6 languages each marked with a color illustration of the flags of the countries that speak those languages, including English. It says the kit does not include paint or glue. A CAUTION in the 6 languages warns you about using paint or glue near an open flame and to have good ventilation.
​WHAT'S IN THE BOX:

Since as I said earlier, somebody cut all the parts off the trees in this kit. The parts trees illustrations show that originally there were 4 trees of tan parts and just one smoked-glass clear part that's the cockpit transparancy.

I submit the photos of the parts and you can see what's there.

​As said above, I matched the loose chopped-off parts to the parts trees illustrations and found out two things. First, one of the elevators is MISSING. I guess who chopped this kit up must have lost it?...groan. This pretty much leaves the kit unbuildible for the time being....very sad indeed.

Secondly there was 2 identical things in the kit that were not mentioned as being a double on the parts trees illustrations.

Page 1 begins with a black and white repeat of the box art, followed by the history of the aircraft in 6 languages, including English.

Page 2 begins with ATTENTION about the model, followed by international assembly symbol explanations and a listing of Gunze Sangyo Aqueous Hobby Colour & Mr. Hobby brands of paint colors. The bottom of the page has a black and white photo of the B-52G made up in the scheme of the aircraft from Griffis AFB.

Page 3 to 5 give a grand total of 6 assembly steps.

Page 6 has a 4-view of the box art scheme, plus painting instructions for the inside of the cockpit and the engine pods and weapons on racks. (this scheme already discribed above).

Page 7 has a 4-view of the the Griffiss AFB B52G. There are paint instructions for the engine pods and weapons on racks here too.

Page 8 has the parts trees illustrations. One part is shaded out as being excess and not needed to complete the model.

To the right of the parts trees illustrations is decal applicaton instructions in the 6 languages, including English.

Below this is DML/Marco Polo's street address in El Monte, CA, their telephone and FAX numbers, PRINTED IN THE USA and the copyright date of 1988.

According to the parts trees illustrations, tan letter A tree held the wing halves, one fuselage half, wheels and their struts, the bomb-bay door etc. (38 parts) 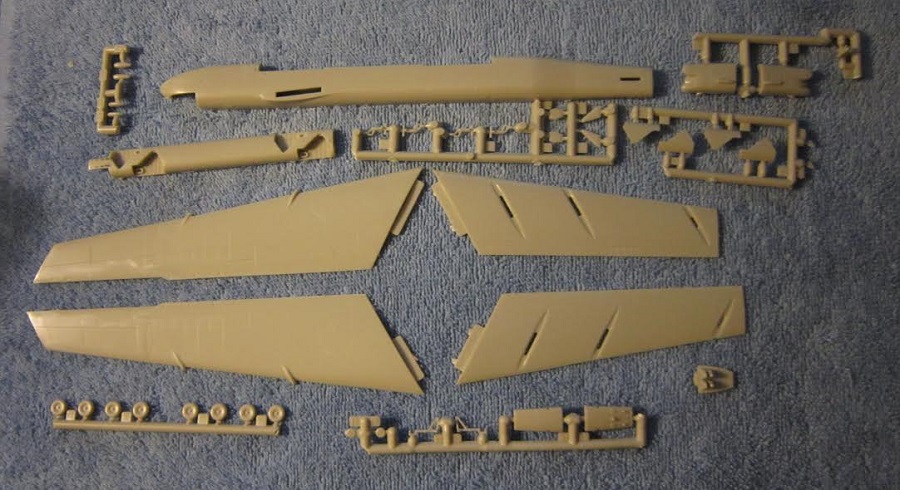 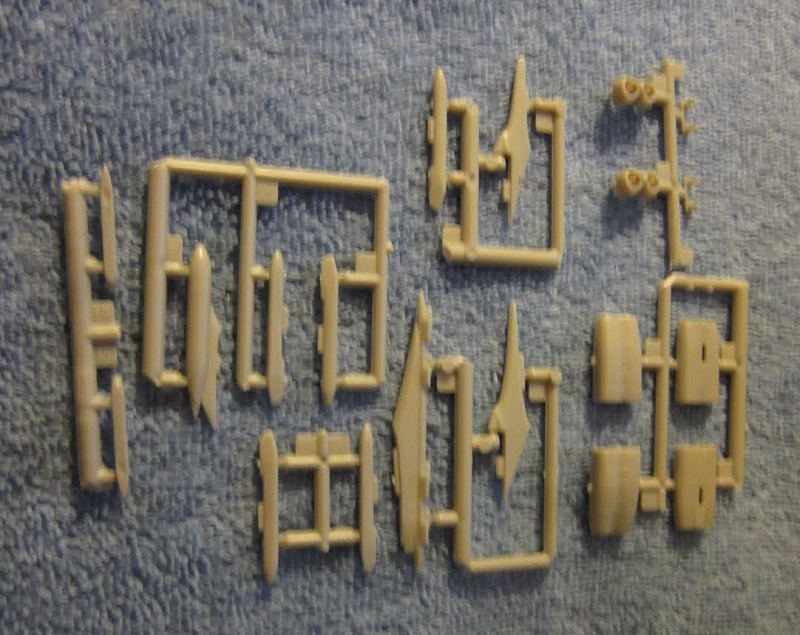 ​The sole smoked-glass clear cockpit transparency completes the plastic parts in the kit. 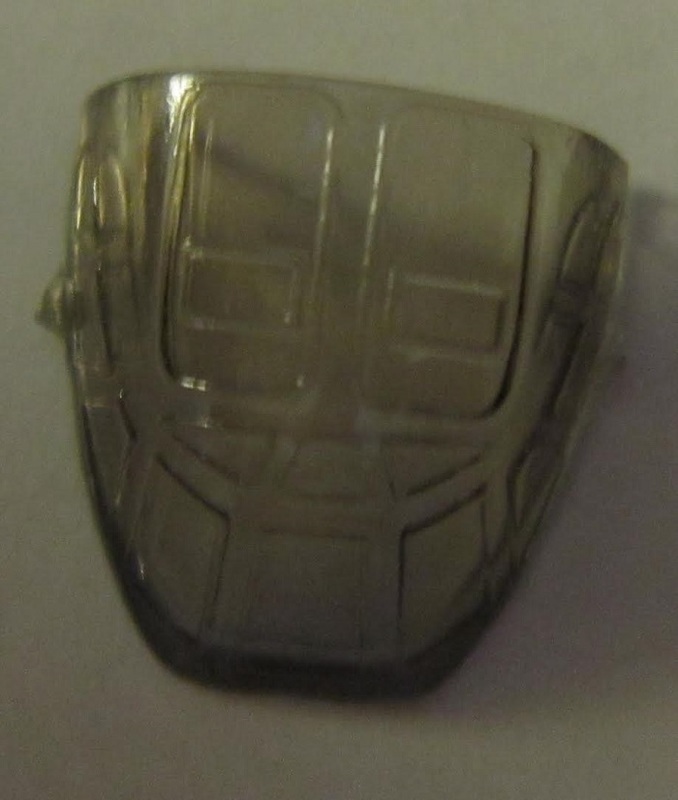 The decal sheet completes the contents.

It includes a lot of stencil marks a cockpit interior decal and some white panels that are not shown exactly where the heck they go in the instructions...sigh.

This is a nice kit, but too small a scale for my tired old eyes. I will probably make a gift of it to someone.

I wish the person that chopped all the parts off the trees had left them them alone ! I did check them against the parts trees illustrations to make sure all parts are in the box.

I cannot fathom WHY the host chapter of that IPMS contest would have put a chopped up model like this into their raffle???

​I am no fan of modern aircraft models, nor this tiny scale, due to my aging eyes. I have graduated to 1/48th scale and above and want to sell off all my 1/72nd scale WWII aircraft kits.