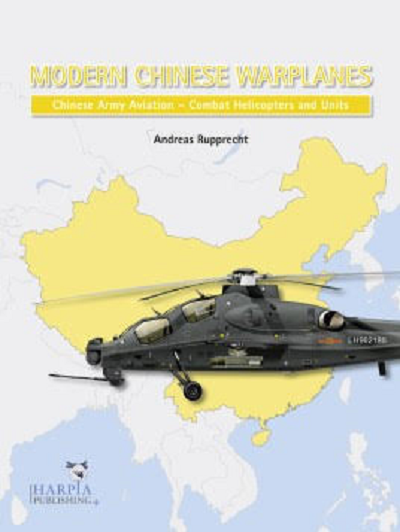 Copyright 2019
​Compared to the People's Liberation Army Air Force and Naval Aviation, the PLA's Army Aviation is the least known and understood of the country's air army.

Its formation was only approved in 1986 and it was established as the Army Aviation Corps in January 1988, using helicopters inherited from the Air Force.

Beginning as a single regiment, the first Army Aviation brigade was formed in 2009 and the force has now expanded to around a dozen front line units operating hundreds of different helicopters.

In its current form, Army Aviation has established itself as a major force in support of the PLA Ground forces.

Harpia Publishing is based in Wien, Austria.

This book comes in a sealed clear cello envelope.

The cover art shows a AZ-10A helicopter, posed over a map of China.

The book contains 66 color photos of helicopters. Some photos are really tiny.

There are 11 color illustrations of insignia's, 23 data lists and 7 maps.

The last pages in the book has a ad for Scramble Magazine and the Aviation Graphics.com web site. Also, cover arts of 3 other aircraft books that Harpia publishes: "Modern Chinese Warplanes" (this book), "EMB-314 Super Tacano" and "Carrier Aircraft of the 21st Century".

This book will be of interest to modelers, aviation historians and enthusiasts alike.

I want to sincerely thank Casemate Publishers, the N. American distributor of Harpia book for this review sample and the folks at Harpia.

All Harpia titles can be viewed on Casemate's web site at:
www.casematepublishers.com