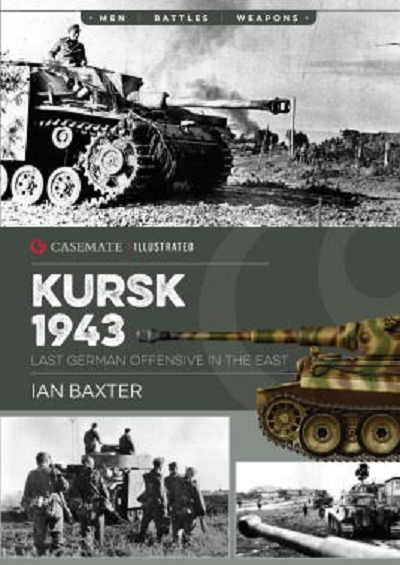 In the summer of 1943, the German army launched Operation Zitadelle (Citadel), aimed at cutting off a large number of Soviet forces in the Kursk salient. This offensive resulted in the Battle of Kursk, the largest tank battle of WWII.

Kursk quickly became a fierce contest of attrition, as Wehrmacht and elite Waffen-SS panzer divisions equipped with the powerful Tiger and Panther tanks, tried to hammer their way through the intricate lines of strong Soviet defensive positions. The result was two weeks of unceasing fighting as German units were slowly and systematically ground down in a series of brutal armored battles.

During this ferocious fighting the Red Army savagely contested every foot of ground, finally ending German invincibility forever. For the first time in its short history, the blitzkrieg concept had failed. The reverberations caused by the defeat at Kursk were immense, and never again would the German war machine go on the offensive in the East.

Stiff defensive action was now the stratagem placed upon the dwindling Panzerwaffe right to the gates of Berlin.

Casemate is a book distributor and publisher based in Pennsylvania.

This book is softcover of 138 pages.

The cover art has three black and white wartime photos on it. The largest photo at the top shows a Stug. III. Below it is a picture on the left of a Pz.Kpfw. IV with 2 crewmen on top, being followed by 5 infantrymen. The photo on the right shows a column of Pz.Kpfw. IV’s moving down a city road.

The front and rear covers have a fold-over leaf that is 4” wide.

The leaf on the front cover has the history of the battle.

The leaf on the back cover talks about the author: Ian Baxter is an avid collector of WWII photographs. His previous books include “Hitler’s Boy Soldiers” “German Army on the Eastern Front, the Advance” “German Army on the Eastern Front, the Retreat”, ”Nazi Concentration Commandants 1933 -1943”, “The Crushing of Army Group North” and the SS Waffen Division series, including “SS Leibstandarte Division and SS Totenkopf Division at War”. He lives near Chelmsford Essex.”

Below this there are 4 color cover art of other Casemate books: “From Moscow to Stalingrad”, “Operation Typhoon”, “The Second SS Panzer Division Das Reich” and “German Armor in Normandy”.

Casemate’s address in Havertown, PA and their office in the UK are listed.

There are black and white photos of: Soviet infantry with a 1910 Maxim machine gun and one of them with a M1940 mortar, 11 photos of German soldiers on a city street and Russian soldiers also on a city street and one of them in a foxhole, a photo of Hitler with some of his generals, a Panzerjager officer, 18 photos of panzer crewmen, a portrait of Stalin, Russian infantry with a PTRS anti-tank rifle in a fox hole, Russian sappers digging up German teller mines, Russian cavalry on horse-back, a Russian 76mm divisional gun  M1942 (Zis-3), a Russians with PPSH-41 machine guns or anti-tank rifles and 76.2mm field gun, 2 photos of a German Sd.Kfz. 10/4 half-track, a 10.5cm LeFH 18/42 being towed by a Sd.Kfz 251, 3 photos of a knocked out Soviet T-34, a German 12cm Granatwerfer 378 (r) crew, various AFVs spread out over the steppes, a German Sd.Kfz. 223 (8 rad), two photos of a Marder II, a German 15cm howitzer, portrait photos of German Field March Erich Von Manstein, General Hermann Hoth, General Werner Kampf and General Water Nehring.

With comprehensive captions and text, Kursk 1943 tells the story of this dramatic battle using 156 black and white photos, 10 color profiles and a color illustration of a German NCO and a Soviet soldier and 2 color battle maps.

This is one neat book. It will be of great interest to modelers and military historians alike.

All their book titles and the titles of other companies books can be viewed on their website at:
www.casematepublishers.com