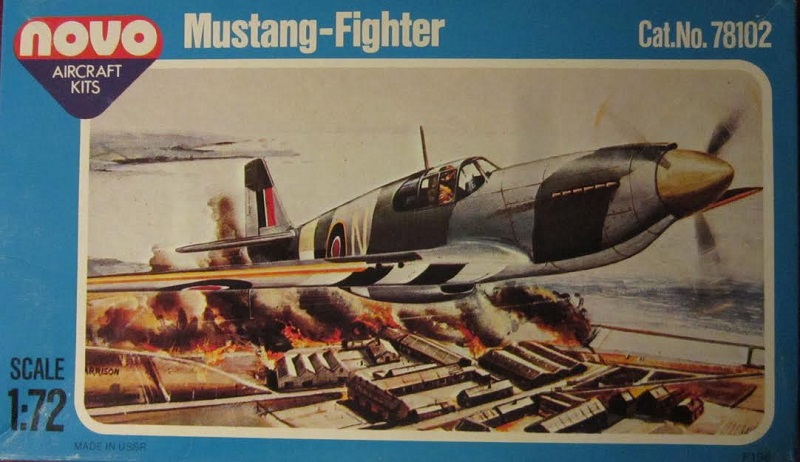 
OUT OF PRODUCTION
HISTORY:
The North American Aviation P-51 Mustang is an American long-range single-seat fighter and fighter-bomber used during WWII, the Korean War and other conflicts.

The Mustang was conceived, designed and built by North American (NAA) in response to a specification issued directly to NAA by the British Purchasing Commission. The prototype NA-73X airframe was rolled out on 9 September 1940, 102 days after the contract was signed and first flew on 26 October.

The Mustang was originally designed to use the Allison V-1710 engine, which had limited high-altitude performance.

It was first flown operationally by the Royal Air Force (RAF) as a tactical-reconnaissance aircraft and fighter-bomber (Mustang Mk I). The addition of the Rolls-Royce Merlin to the P-51B/C model transformed the Mustang’s performance at altitudes above 15,000 ft, matching or bettering that of the Luftwaffe’s fighters.

The definitive version, the P-51D, was powered by the Packard V-1650-7, a license-built version of the Rolls-Royce Merlin 60 series two-stage two-speed supercharged engine, and armed with six 50 caliber (12.7 mm) M2 Browning machine guns.

From late 1943, P-51Bs (supplemented by P-51Ds from mid-1944) were used by the USAAF’s Eighth Air Force to escort bombers in raids over Germany, while the RAF’s TAF and the USAAF’s Ninth Air Force used the Merlin-powered Mustangs as fighter-bombers, roles in which the Mustang helped ensure Allied air superiority in 1944.

The P-51 was also in service with Allied air forces in the North African, Mediterranean and Italian theaters, and saw limited service against the Japanese in the Pacific War. During WWII, Mustang pilots claimed 4,950 enemy aircraft shot down.

At the start of the Korean War, the Mustang was the main fighter of the United Nations until jet fighters such as the F-86 took over this role.

The Mustang then became a specialized fighter-bomber. Despite the advent of jet fighters, the Mustang remained in service with some air forces until the early 1980’s. After WWII and the Korean
War, many Mustangs were converted for civilian use, especially air racing, and increasingly preserved and flown as historic warbird aircraft at air shows.
THE KIT:

The box art shows a British Mustang Mk. II attacking a factory that is on a shoreline.

The Mustang is in a wave-pattern of matt ocean-grey and matt dark-green. It has a vertical blue, white and red tricolor on the rudder, a matt sky fuselage band, then a British roundel followed by a matt sky letter N.

The undercarriage is matt medium sea-grey, with black and white “Invasion stripes” under the wings and on it’s belly. The propeller spinner is matt sky and the leading edges of the wings are matt yellow.

The bottom of the box serves as the painting and marking instructions. It shows 2 schemes. Each is shown as a 3-view in color.
WHAT’S IN THE BOX:

​This kit contains 3 medium-grey parts trees, a loose medium-grey lower wing part, each wrapped in tissue-paper, a clear canopy part – also wrapped in tissue, the decal sheet and instructions, all in a stapled-shut cello bag. The propeller spinner had broken off it’s tree and was floating around inside the box.

The instructions consist of a single sheet that is 8 ½” square and printed on both sides and folded several times to fit the box. It is printed on poor quality newsprint type paper.

Parts are numbered in the assembly steps and on the parts trees, but not alphabetized. There are no part trees illustrations in the instructions. This will mean some careful extra work to get the right parts for each assembly.

As said earlier, the bottom of the box serves as the painting and marking instructions and it shows 2 schemes in full color. Each is a 3-view.

The first scheme is the British Mk. II (the box art scheme, already described above). It shows here a black serial no. FR919 on the rearmost fuselage sides.

The second scheme is in overall olive-drab above a matt neutral-grey undercarriage. It has 5 diagonal white fuselage bands, a white tail tip and 3 horizontal white bands around the tail. A U.S. star and bar insignia is above the port wing and below the starboard wing and on the fuselage sides over the diagonal white stripes, with a yellow serial no,.36189. 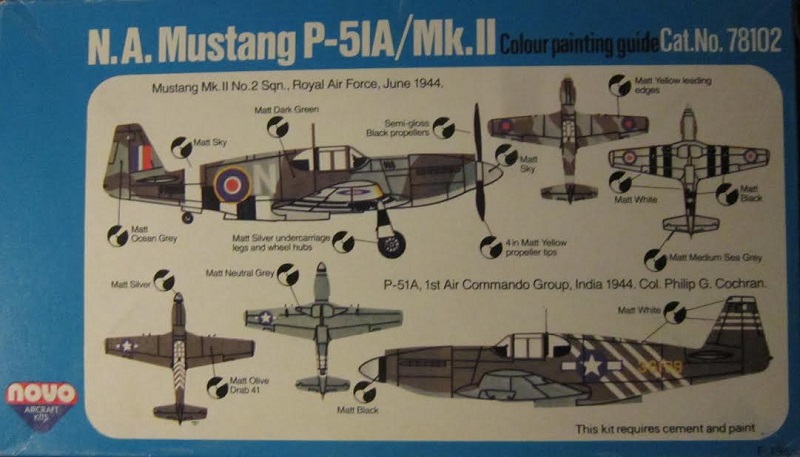 Each side panel has a list of the kits features in 8 languages including English:

​26 parts, rotatable propeller, decal sheet with marking for alternate versions that are shown on the base of this box, the wingspan is 6”. 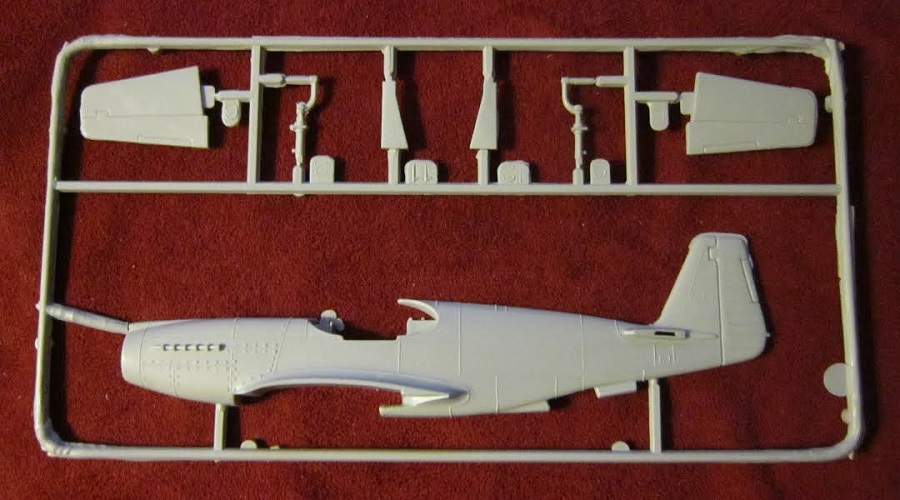 The second medium-grey ;parts tree holds: the other fuselage half, the propeller, the pilot figure, pilot seat and the large gear doors (6 parts) 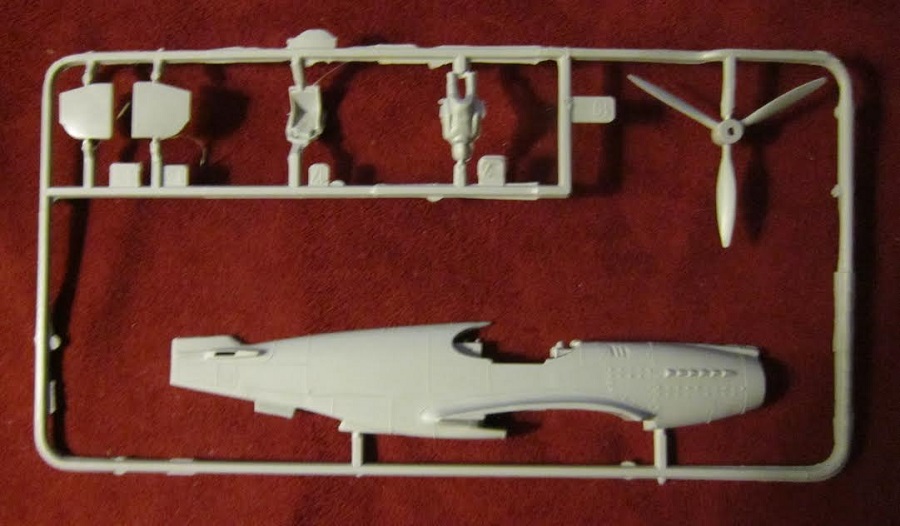 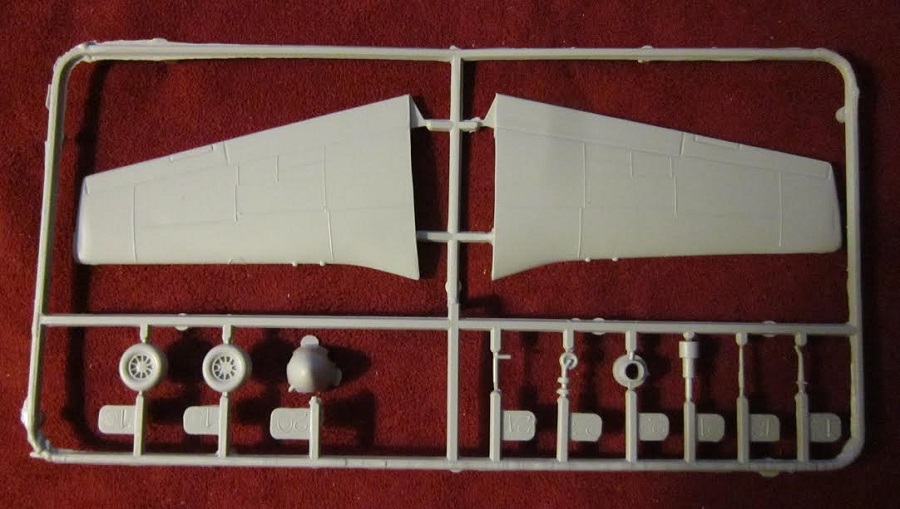 The loose medium-grey lower wing half (full span) is next

The clear canopy part is molded solid and it will take surgery to pose it open. 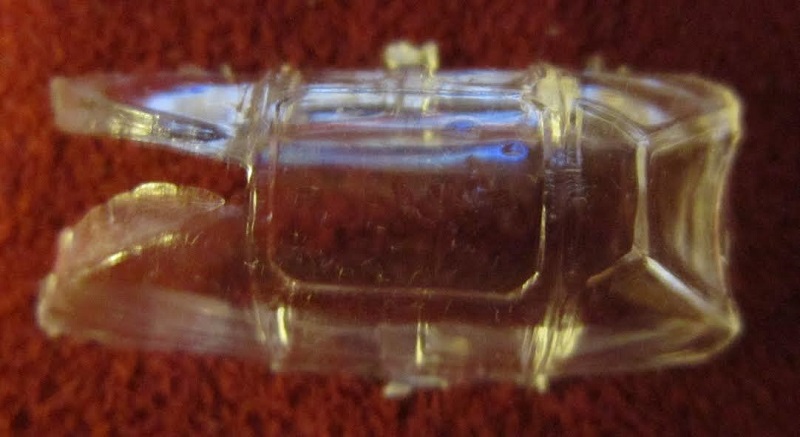 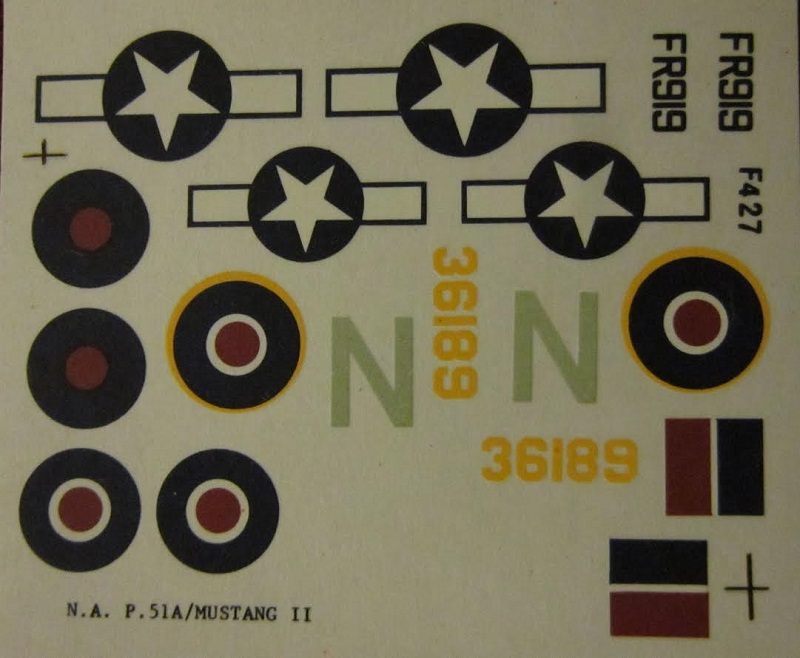