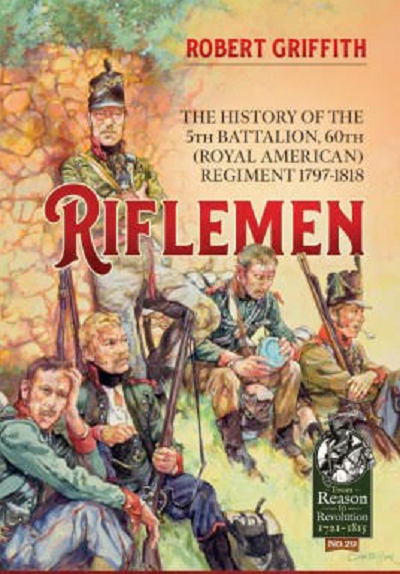 MSRP: $59.95
​th Battalion of the 60th (Royal American) Regiment was the first rifle battalion in the regular British Army.

Raised in 1797, it marked a significant step in the development of British light infantry and rifle corps.

After serving in Ireland during the 1798 Rebellion, in the West Indies, and in the Americas, the battalion rose to fame during the Peninsular War. It was one of only three battalions to be present from the initial landings in Portugal through to the invasion of France and victory six years later.

Divided between the brigades of Wellington's army to provide specialist rifle and skirmishing capability, the riflemen often formed advance or rear guards, patrols, and outposts.

Frequently praised by Wellington and his divisional commanders, the battalion won 16 battle honors.

Drawing off official records, memoirs, court martial transcripts, inspection reports, and unpublished letters, Riflemen recounts not only the campaigns in which the battalion fought, but also many personal stories of the soldiers who served with it.

Riflemen includes tales of murder, promotion from the ranks, desertion, prisoners of war, and small actions that are often overlooked. At the first history of the battalion written in almost 100 years, it sheds new light on a vital component of Wellington's army and its important place in the history of the British Army.

Ever since he picked up the first Bernard Cornwell's Sharpe books as a teenager, Robert Griffith has been passionately interested in the Napoleonic period.

As the author of several historical fiction novels set during the long wars against the French, and an ardent Napoleonic re-enactor, he has long striven to bring alive the stories of the men who fought for Britain against the armies of Napoleon.

Having now turned to writing history he exhaustively researches his subjects to draw out previously overlooked details of both the campaigns and the everyday life of Napoleonic soldiers.

Helion and Company is based in the UK.

This book came shrink-wrapped in a clear cello cover.

The cover art is a color illustration of 5 riflemen sitting by a stone wall.

The book contains 41 black and white illustrations and 12 color ones. There are 6 portraits of notable persons.

They are the North American distributor of Helion & Company books and all their titles can be viewed on Casemate's site at:
​www.casematepublishers.com