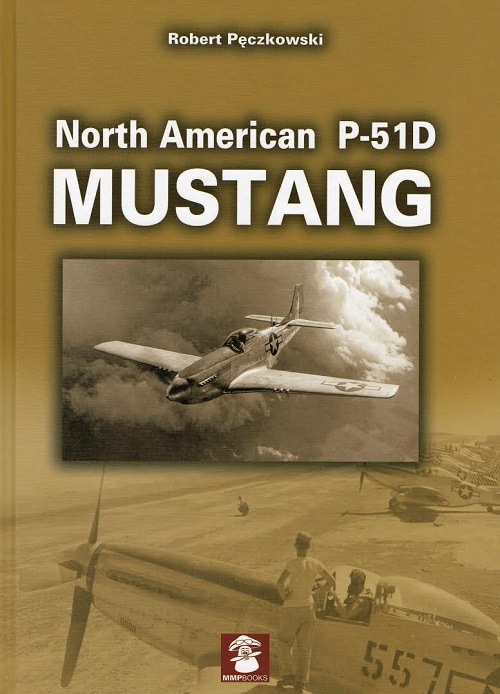 Mushroom Models Publications (MMP) is based in the UK. They have all their books printed in Sandomierz, Poland in the English language by their associate Stratus. Stratus does their own series of books in the Polish language.
​This detailed monograph covers the design and development of the P-51D Mustang family, the main wartime production variant of this classic fighter.

The P-51D model introduced the definitive "Bubble" canopy and heavier armament, and was the mount of many aces. After WWII, the Mustang saw action again in Korea, and also served with many other air forces around the world.

The cover shows a photo of a P-51D flying above the clouds over an all orange background photo of P-51D's parked on an airfield.

There are 41 technical manual illustrations and 2 datal lists.

There are 85 black and white photos including 6 that are of the walk around type.

For cockpit details and instruments there are 11 illustrations in color, 16 in black and white.

There are 32 full color side profiles:

This is a very therough book about the P-51D and covers a lot of information about it.

I want to thank Roger Wallsgrove, Editor in Chief of MMP and the folks at Casemate publications who sent me this review sample.

Casemate is the N. American distributor of MMP books.
​A complete listing of MMP titles can be seen on the Casemate site at:
www.casematepublishing.com