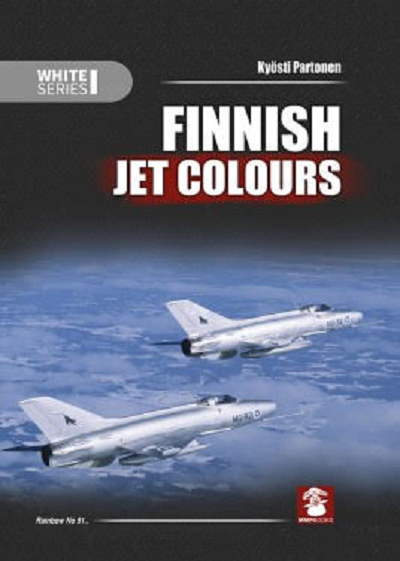 MSRP: $62.00
​This work is based on almost 40 years of study of Finnish Air Force aircraft external finish and markings. It started from model building and searching references, then widening to more systematic photographing of the aircraft and ending in various archives.

The goal has been to show the outer finish of the aircraft, not only in standard form, but also known exceptions. knowing that modelers love them.

Historic aspects of the development and usage of various types in the Finnish Air Forces is also is included for wider interest.

This new book covers front-line and trainer jets deployed by the Finish Air Force. The procurement and operations of their aircraft are described by the well-known Finnish author Kyosti Patonen and are illustrated by many previously unpublished photographs, plus color profiles exclusively created  for publication here.

Mushroom Model Publications (MMP) is based in the UK. All their books are printed by their associate Stratus in Sandomierz, Poland in the English language. Stratus also does their own line of books in both Polish and English.

This book is hard-bound of 216 pages in 8 1/2" x 11 1/4" page format.
The cover art shows a color photo of 2 Mig-21F-13's flying above the clouds. They are from the Karelian Wing during winter 1982. The closest plane is Soviet Union overhauled MG-92, painted overall dull silver-grey and leading is MG-34 carrying original metallic look-a-like lacquered finish.

This book will be of great interest to modelers that want to do a Scandinavian aircraft model or to aviation historians alike.