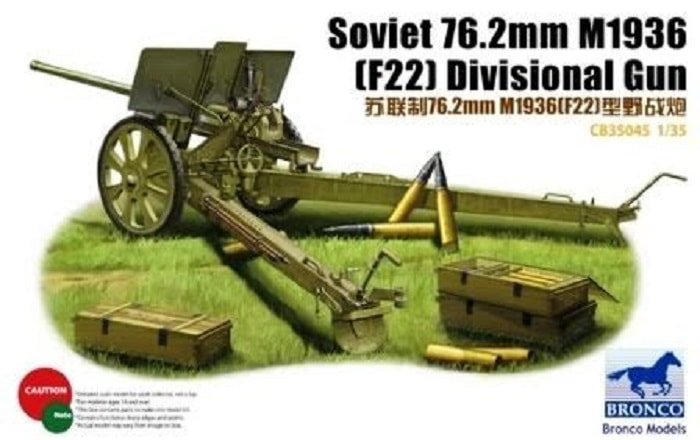 The 76-mm divisional gun M1936 (F-22) was a Soviet divisional semi-universal gun, adopted for Red Army service in 1936. This gun was used in conflicts between the USSR and Japan on the Far East, in the Winter War and in World War II. Many F-22s were captured by Wehrmacht, modernized by the Germans and used against Soviet forces.

The F-22 was a semi-universal gun which combined the capabilities of a divisional gun and - to some extent - of an anti-aircraft gun. It had a split-trail carriage with suspension and steel wheels with rubber tires. The gun was equipped with a semi-automatic vertical sliding breech block; the recoil mechanism consisted of a hydraulic recoil buffer and a hydropneumatic recuperator. The sights and the elevation controls were located on different sides of the barrel. The chamber fitted the standard model 1900 cartridge, which meant that the gun could use ammunition of older 76.2-mm divisional and regimental guns.

Bronco Models is a model company based in China.

The box art shows the model made up on a base. It is overall Soviet dark green.
​WHAT'S IN THE BOX:

The kit contains 5 light-tan trees of parts, a brass PE fret, the decal sheet and instructions.
The instructions consist of a staple-bound booklet of 8 pages in 8 1/2" x 11 1/2" page format, printed on slick coated paper.

Page 1 of the instructions begins with a repeat of the box art in full color, above a one-paragraph history of the gun in English, German and Chinese.

Page 3 has the parts trees illustrations. Some parts are shown shaded-out. Meaning they are excess and not needed to complete the kit.

Page 4 to page 6 give a grand total of 6 assembly steps.

Page 7 shows illustrations of the gun in firing position and traveling position.

Page 8 has a full color 5 view of the gun, illustrations of the ammo rounds and wood ammo storage boxes showing the decal locations on the boxes. 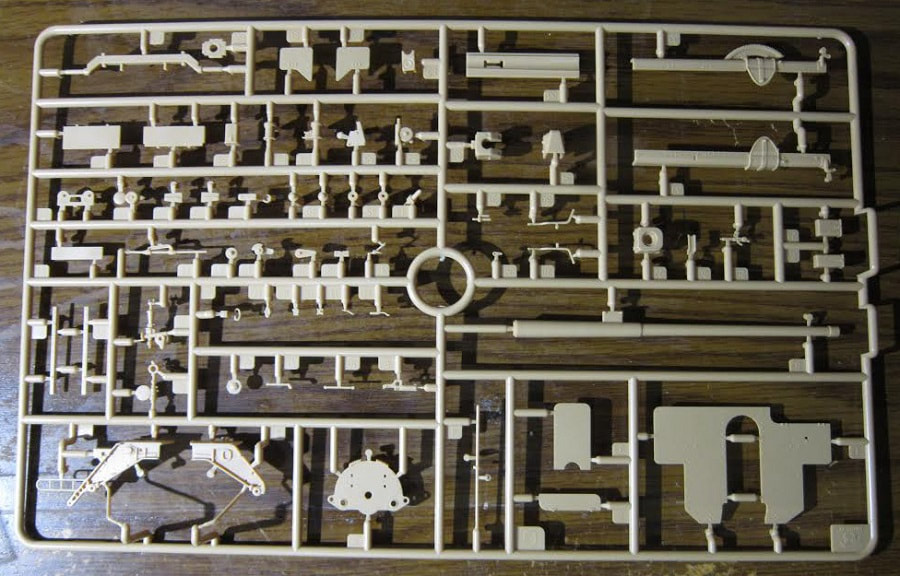 ​The second & third light-tan trees are letter H. There are 2 identical copies of this tree. Each holds: wheel halves, wheel hubs, a elevation wheel and its shaft etc. (7 parts per tree)
There is no letter I parts tree. 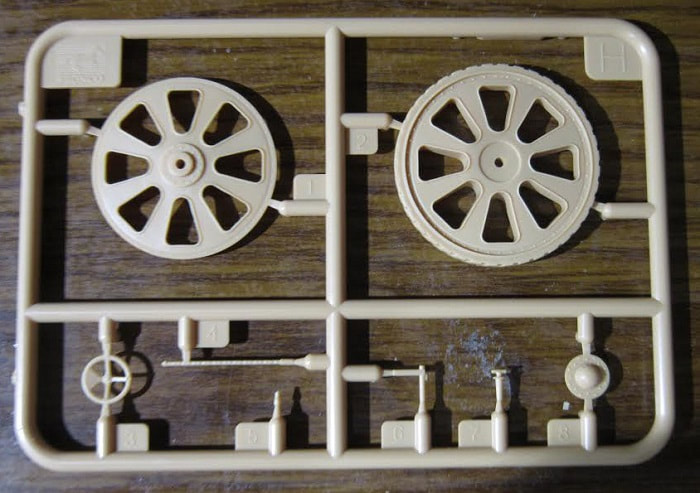 ​The fourth light-tan tree is letter J. It holds: the ammo crate pats and the ammo rounds etc. (18 parts). 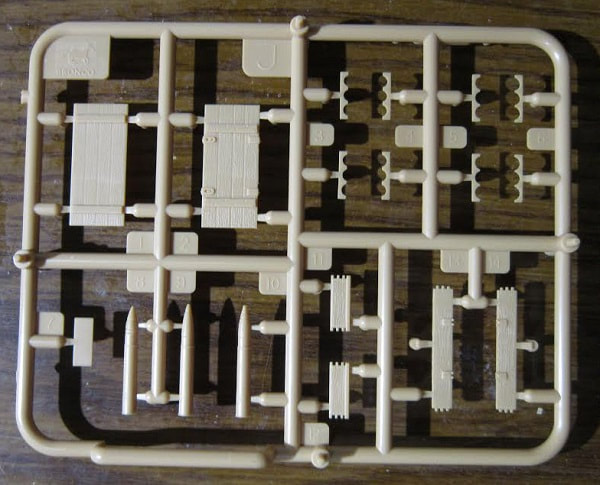 ​Lettering now jumps the the fifth light-tan tree letter N. It holds the trail arms and many small fittings (35 parts) 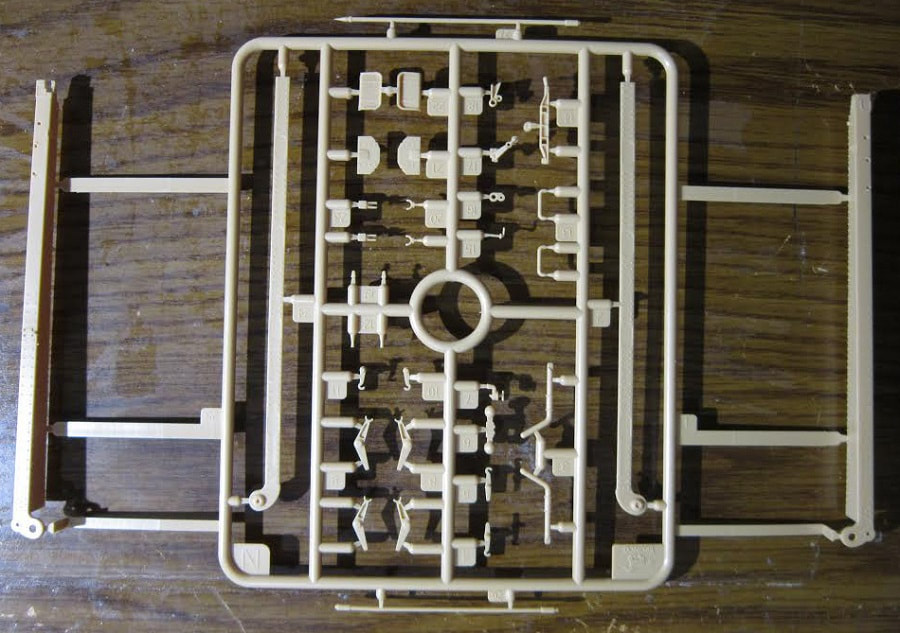 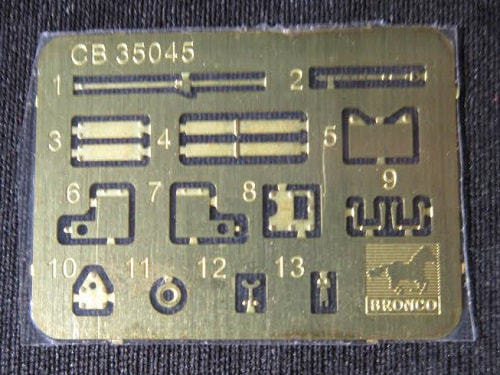 ​The decal sheet completes the parts in the kit. It holds marks for on the ammo rounds and their storage boxes. 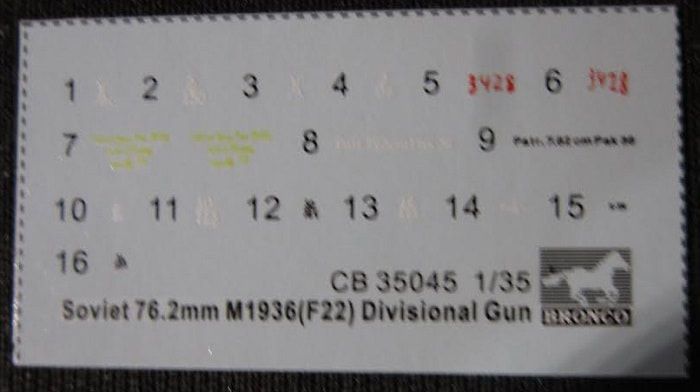 ​This is a neat artillery piece. It would have been nice to have had it include a gun crew.