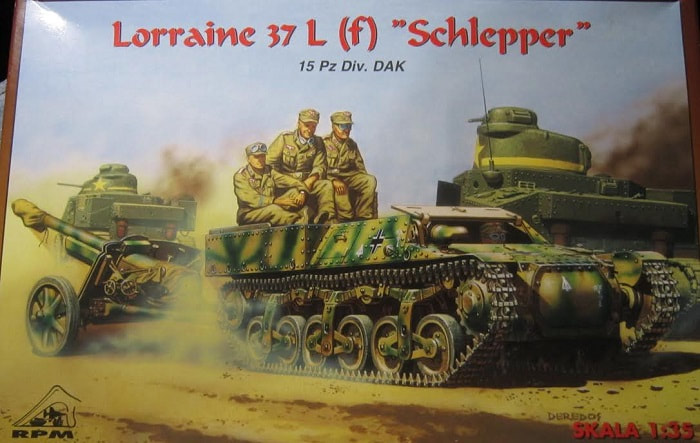 A deceased friend of mine willed me this kit. He paid $19.98 for it back then according to the sticker still on the box.
​HISTORY:

The Lorraine 37L or Tracteur de ravitaillement pour chars 1937 L, ("Tank Supply Tractor 1937 L") was a light tracked armoured vehicle developed by the Lorraine company during the Interwar period or Interbellum, before the Second World War, to an April 1936 French Army requirement for a fully armoured munition and fuel supply carrier to be used by tank units for front line resupply.

A prototype was built in 1937 and production started in 1939. In this period, two armoured personnel carriers and a tank destroyer project were also based on its chassis. Mainly equipping the larger mechanised units of the French Infantry arm, the type was extensively employed during the Battle of France in 1940.

After the defeat of France, clandestine manufacture was continued in Vichy France, culminating in a small AFV production after the liberation and bringing the total production to about 630 in 1945.
Germany used captured vehicles in their original role of carrier and later, finding the suspension system to be particularly reliable, rebuilt many into tank destroyers (Panzerjaeger) of the Marder I type or into self-propelled artillery.

RPM is a model company based in Poland.

The box is very blousy with a large letter "L" void around the parts.

The box art shows a Lorraine in captured German scheme of earth yellow with waves of dark green and red brown over it. It has a small German cross on the forward end of the sides of the hull and a white division sign for the Afrika Korps 15th Panzer Division on the bow.

It shows 3 crewmen aboard, but no figures are included in the kit.

Also not included is the Pak 38 anti-tank gun it is shown towing.

The Lorraine is creating a cloud of dust while passing two knocked out Grant tanks.

One side panel shows a color illustration of just the Lorraine in the box art scheme, followed by the statements that the kit is suitable for ages 6 to adult, contains decals and instructions for assembly and paint and plastic adhesive are not included.

This statement is shown in Polish, Czech and English, with color illustrations of the flags of Poland, Czech Republic and the UK.

There is a yellow sticker on the box that says that Air Connection in Canada is the importer and distributor there, with their street address, phone and fax number.

The other side panel has color box arts of other AFV kits that RPM manufactures: a PZinz 126, a Ford TC WWI armored car, a "Super tank" (no other description given ??), a Stalin Line pill box diorama and a Soviet T-34/85.

No kit numbers are provided for any of these 5.
​WHAT'S IN THE BOX:

This kit contains 7 pale-grey trees and the decal sheet in 2 sealed cello bags.

Page 1 begins with a small black and white repeat of the cover art. To its right is a one paragraph history of the Lorraine in Polish.

Below this is side profile for marking and painting the box art scheme (already described above).
Next the page has illustrations of two of the parts trees.

Trees are not alphabetized, nor do they have part number tabs on them next to parts. Parts are numbered on the parts trees illustrations in the instructions and constant looking at them will be needed to get the right parts for assembly.

The bottom of the page has RPM's street address and phone number in Warsaw, Poland.

Page 2 begins with a parts tree illustration of the third parts tree.

There are 2 identical medium-sized pale-grey parts trees. They each hold: a hull side, drive sprockets, road wheels, bogies, leaf springs etc. (71 parts each) 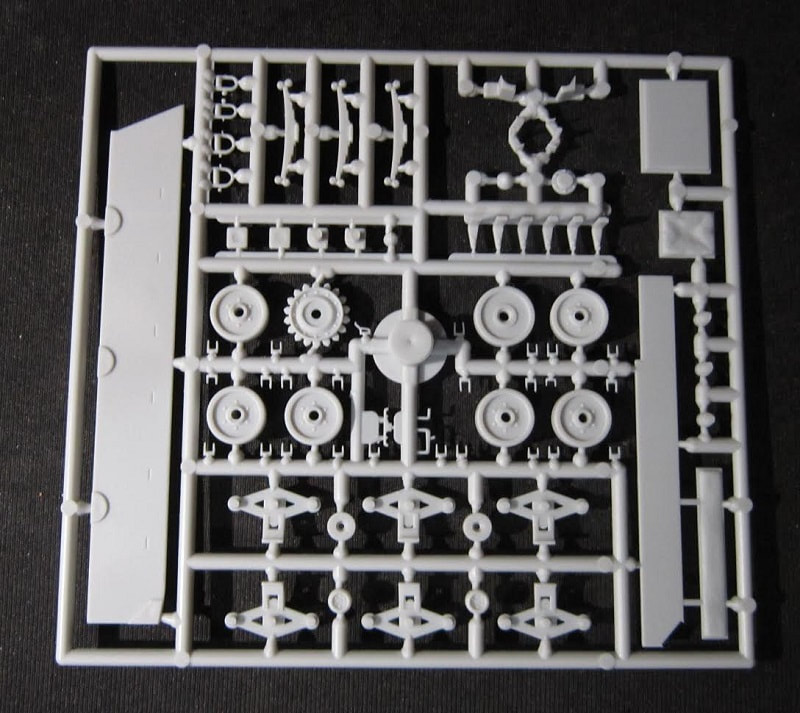 ​There are 4 identical medium-sized pale-grey trees. They each hold: individual tread links (64 links per tree)
​These links are tiny and have 5 attachment points holding them onto the tree....groan. 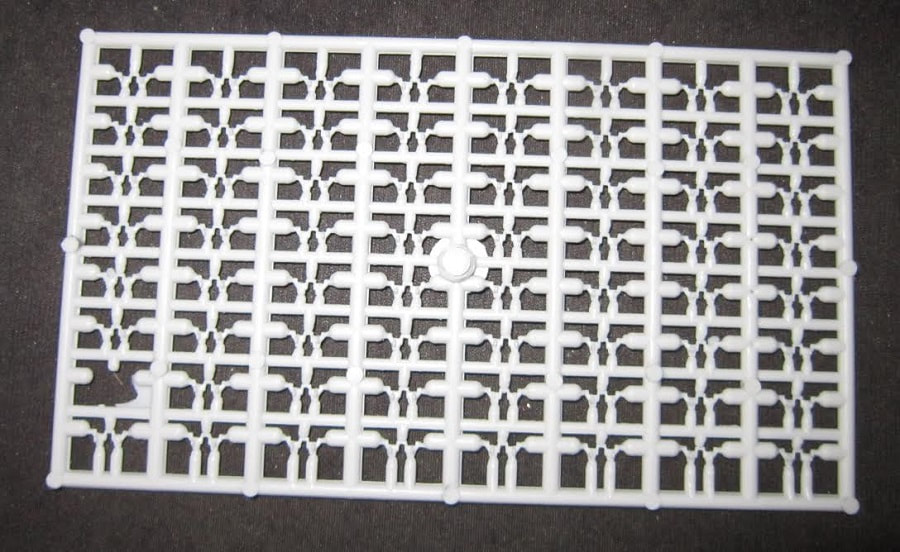 ​The largest pale-grey tree holds: the Lorraine's body parts (separate floor, sides, front and rear), tools etc. (33 parts) One part is X'd out in the parts trees illustration as being excess and not needed to complete the kit. 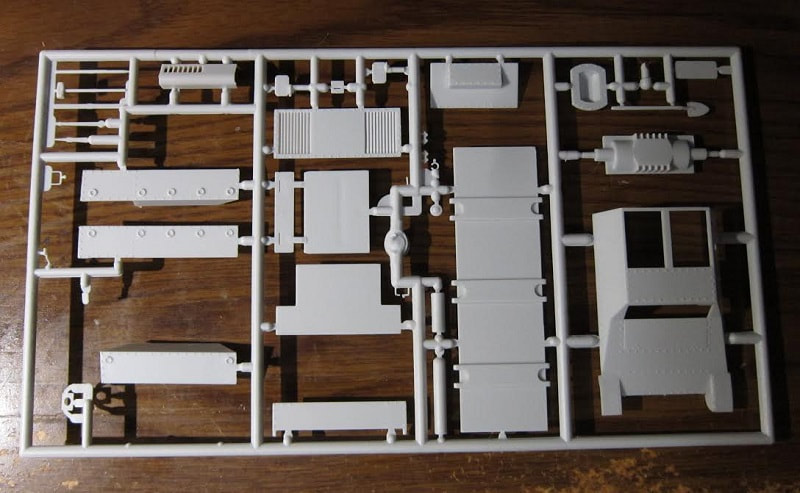 ​The decal sheet has just the markings for the 15th Panzer Division, Afrika Korps. 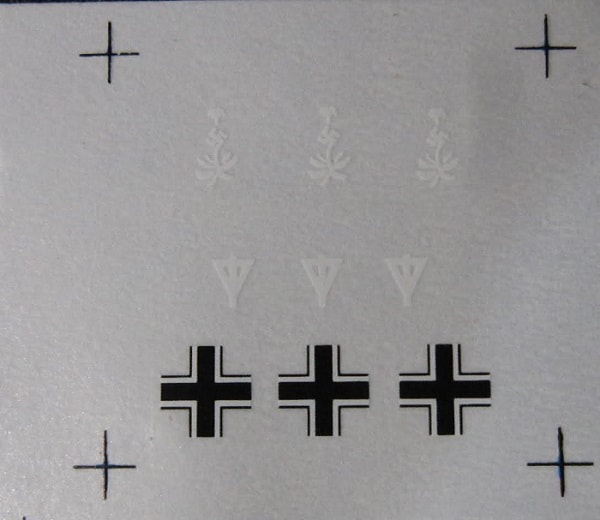 ​As already mentioned, there are no figures or that Pak 38 shown on the box art in the kit.