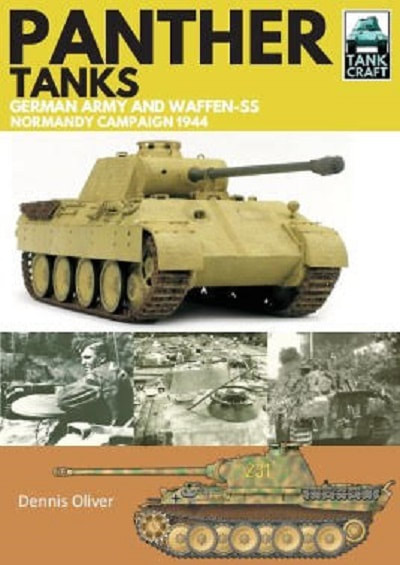 In the center, left to right, is a photo of Untersturmfuhrer Rolf Jauch of SS-Panzer-Regiment 12 photographed in the cupola of his Panther Ausf. A just prior to the Allied invation.

The back cover, from top to bottom, shows a Panzerbefehlswagen Panther Ausf. A attached to 11.Abtellung headquarters of Panzer-Regiment-33. This tank is shown at the bottom of page 22 of the illustration section.

Next is a photograph of the photo-etched parts from a Eduard Model set for the Panther Ausf. A in 1/35th scale.

A photo of a Panther Ausf. G of 1.Abtellung, Panzer-Regiment-24 disabled near Coulouvray-Boisbenatre, north-east Avranches, on 2 August 1944.

A color profile of Panther Ausf. G of 1.Kompanie, Panzer-Regiment-24.

There is a postcard inserted in the book to use to subscribe to Pen & Swords new book announcements lists.

In the last pages of the book there is box arts shown of 5 other books that Pen & Sword publishes:

Fighting the Breakout, The German Army in Normandy From Cobra to the Flaise Gap

Tiger I and Tiger II Tanks, Tank Craft series no. 1

This is a super neat book on the Panther and will be of great interest to AFV modelers and historians alike.

I want to thank the folks at Casmate Publishing, the North American distributor of Pen & Sword books for this review sample and Pen & Sword as well.

A complete listing of Pen & Sword book titles can be seen on Casemate's web site at;